A hydrogen monster truck at an Anglo American Platinum... 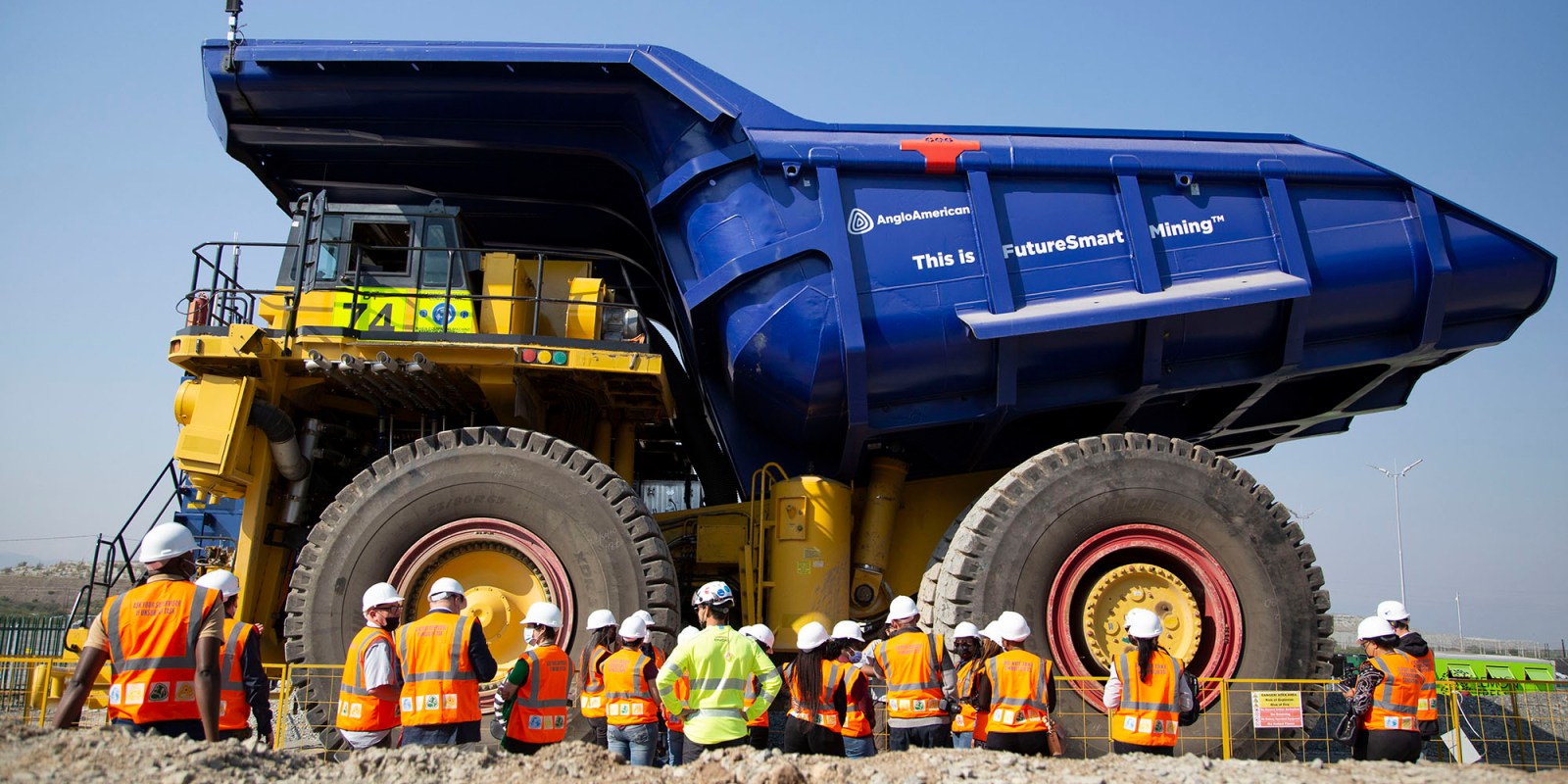 Anglo American unveils a prototype of the world’s largest hydrogen-powered mine haul truck at the Magalakwena mine in Limpopo on 6 May 2022, representing what it called a vital step towards reducing carbon emissions over time. (Photo:Felix Dlangamandla / Daily Maverick)

Anglo American Platinum has unveiled a prototype of the world’s largest hydrogen mine haul truck, which does the job with zero emissions. In terms of size, it’s simply a whopper — and the technology’s potential is mammoth.

Unloaded, the monster tips the scales at 220 tonnes — the combined weight of around 35 African elephants. And it can carry up to 290 tonnes of rock. Fully loaded, it weighs more than 500 tonnes. A single tyre dwarfs a Springbok lock.

But astonishingly, this prototype — unveiled with much fanfare on Friday at Anglo American Platinum’s (Amplats) Mogalakwena mine in Limpopo — emits zero emissions. Powered by a hybrid of hydrogen fuel cells and lithium batteries, it generates more power than its diesel peers, which it will eventually replace.

President Cyril Ramaphosa was among the VIPs watching as the beast honked its horn — which in terms of decibels hardly does credit to its size — and lurched forward beneath a bright Limpopo sky. It churned up a bit of dust and sprayed a bit of water, part of the chemical process involved. But the hulking brute belched no smoke as it climbed a road atop a mountain of dumped mine rock. It then proceeded to do what these trucks do — dumped its load.

Seldom does a truck offloading rubble prompt applause from spectators, but this was a historic occasion, and so it was greeted with cheers.

It is indeed a feat of engineering.

“It is a smart step for Anglo American, but it is a giant leap for South Africa’s hydrogen economy,” Ramaphosa, who clearly enjoyed the spectacle, said in prepared remarks afterwards.

He joked that Anglo employees seemed to have so much fun creating such toys that he might apply for a job with the company when he is fired from his current role.

Jokes aside, the stakes involved are on a similar scale to the truck. At one time, phasing diesel out would have been regarded as a death knell for platinum — one of its key uses is in the emissions-capping converters of diesel engines. But hydrogen fuel cells also require a healthy dose of platinum in the mix. Platinum, as well as ruthenium and iridium, are key to hydrogen production and its use in fuel cells.

Research house SFA Oxford, owned by Amplats’ rival Sibanye-Stillwater, has estimated that hydrogen-fuelled vehicles could account for as much as 500,000 ounces of platinum demand a year by 2030, compared to about 60,000 ounces a year now.

“PGMs play an essential catalytic role in many clean-air technologies, including related to hydrogen production and hydrogen-fuelled transportation. As part of our market development work, we have for some years been working towards establishing the right ecosystem to successfully develop, scale up and deploy hydrogen-fuelled solutions,” said Amplats’ CEO Natascha Viljoen.

Then there is the “zero emissions” thing. Anglo aims to cut its emissions of the greenhouse gases linked to climate change by 30% from a 2016 baseline by 2030, with at least eight of its assets carbon neutral by then. Total carbon neutrality is the 2040 goal. The hydrogen processing facility on site will eventually be solar powered. And the green-hydrogen fuelled truck itself has no emissions.

Amplats still has a fleet of 40 massive diesel haul trucks at Mogalakwena, an open-cast and mechanised operation that is a cash spinner of note. Amplats can certainly afford R&D as it has been posting record profits on record prices. The aim is to replace, by 2030, these fossil fuel guzzlers — one alone can consume 300,000 litres a day — with the prototype that was on view on Friday.

“With diesel emissions from our haul truck fleet accounting for 10-15% of our total Scope 1 emissions, this is an important step on our pathway to carbon-neutral operations by 2040,”  said Duncan Wanblad, Anglo America’s new CEO who took over last month.

Hydrogen has had its malcontents. The electrolysis process used for hydrogen production, for example, is very water intensive, something that detracts from its green sheen.

But it is clearly a far cleaner option than diesel.

Anglo also has an option to commercialise the technology, with a view to freight train and even maritime applications. Platinum might not be the only cash spinner to emerge from Mogalakwena. DM/BM