Winter on Fire: Ukraine’s Fight for Freedom now on Yo...

Winter on Fire: Ukraine’s Fight for Freedom now on YouTube 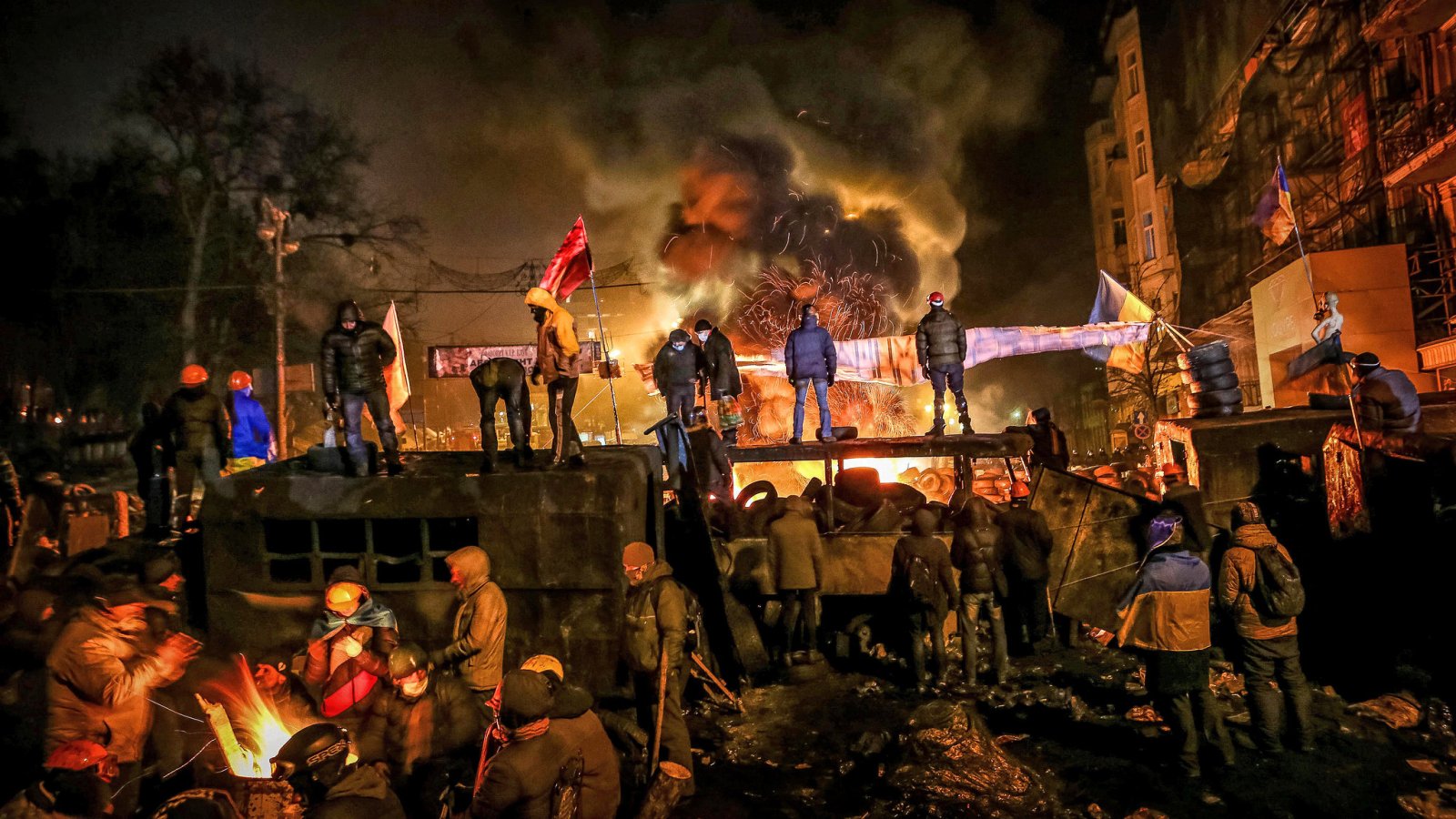 Protestors on a barricade. Production still from "Winter On Fire: Ukraine’s Fight For Freedom." Image: courtesy of Netflix

In response to the Russian occupation of Ukraine, Netflix has uploaded its powerful Oscar-nominated 2015 documentary on the Maidan Square Revolution onto YouTube.

A young boy in a hard hat smiles sarcastically at the camera while bullets rain down behind him. After 92 days, his eyes are glazed over with both defiance and dejection. “This is the Ukrainian Revolution. It’s fun.” One of his comrades is shot down behind him but he barely seems to notice. “I was just dragging a dead body … you can’t surprise me with anything anymore.”

These are the kinds of surreal scenes happening in Ukraine right now, but this one was filmed nearly a decade ago.

Winter on Fire: Ukraine’s Fight for Freedom is a 2015 Netflix documentary by Russian-Israeli filmmaker Evgeny Afineevsky on the Euromaidan protests which took place from 21 November 2013 to 23 February 2014.

On 5 March 2022, in response to Putin’s invasion of Ukraine (and the passing of a Russian law which makes its citizens liable to 15 years in prison for sharing news on the war, or even calling it a war) Netflix uploaded the full film to their YouTube channel, not to be confused with the 2016 documentary Ukraine on Fire, also on the Euromaidan revolution, which was made available on YouTube in August last year.

Winter on Fire begins with a brief rundown of Ukraine’s recent history. Some of the post-production editing for the film was done by longtime David Fincher editor Angus Wall, and this slick opening video-graphic section is where his influence is most noticeable. The female American narration seems like a terrible choice to give this context but the one-minute history lesson is still an effective crash course.

The protests surrounded Viktor Yanukovych, a corrupt pro-Russian autocrat who rigged the elections in 2004 and was promptly overturned through a peaceful protest known as the Orange Revolution, but managed to get re-elected six years later by promising EU membership to the public. When the moment came to sign the EU trade agreement in 2013, he backed out.

With the public outraged, 2,000 Facebook users agreed to meet on Maidan Nezalezhnosti (Independence Square) for a peaceful protest, but the crowd gradually grew until there were tens of thousands.

The protests were more than just peaceful — they actually seemed surprisingly festive. The documentary captures an overwhelming amount of optimism and positivity in the thronging crowds as they sang, danced and picketed, but on the ninth day, the vibe rapidly shifted with the mass arrival of the Ukrainian riot police — the Berkut — who were carrying iron batons instead of plastic and rapidly escalated the conflict.

On Day 11 almost a million people rallied in defence of their freedom in what was called “The March of the Millions”. A man in the crowd expresses that “at this point, it’s not even about European integration, we just want to live in freedom”.

This march is a peak in the enormous display of unity of the Ukrainian people. Ukraine is an ethnically and religiously diverse nation with people of several cultures and languages, and yet across the board, there was an ethos of solidarity. Religious leaders of all the Abrahamic faiths were all there in support of Maidan as well as people from all walks of life.

Afineevsky’s crew interview surgeons and street children, military veterans and celebrities, journalists and labourers, who all passionately express the camaraderie they felt during the protests. As the conflict descends into war, one can’t help but be impressed by the ingenuity and unity of the people of Maidan, but there is also a foreboding sense of doom — they are just civilians fighting armed forces.

Afineevsky’s large fearless camera crew capture spectacular footage of the conflict as it morphs from the uplifting peaceful beginnings into the brutality and fear of an all-out massacre. The film is as action-packed as any Hollywood blockbuster but far more terrifying. A scene of the Berkut charging in unison in their black armour gives the distinct impression of swarming demons unleashed from the gates of hell.

With so many cameras on the ground, Afineevsky doesn’t hold back on the often extremely violent footage. After weeks of attempting to remove the protestors, the Berkut begun bringing in Titushky as reinforcement — illegally hired civilians who were able to perpetrate violence at a level of depravity that the Berkut could not get away with.

The first-person accounts after the fact drive home how desperate the situation really was. “Here we were burning tires. Here we were throwing Molotov cocktails …”. One of the most engaging interviewees is a 12-year-old homeless boy who was on the front lines. He matter-of-factly explains how to make a Molotov cocktail, and speaks of seeing his friends killed.

The sadness and the loss are raw and in your face. Besides the one-minute historical video-graphic, the story is told entirely through interviews with survivors and footage of the carnage. Afineevsky focuses strongly on emotional and personal experiences rather than the nitty-gritty politics of what was actually going on, and while this makes for a compelling film, it seems a missed opportunity to explain the significance of Russia’s imperialist exploits.

The film is a co-production of Ukraine, the United States, and the United Kingdom and it is clearly punting a highly polarised anti-Putin stance, which is just fine except that it never explains why Ukrainians want so badly to be a part of Europe, or what was actually going on in the Ukrainian parliament during the protests, or why the opposition party are painted in such a terrible light, or why Nato didn’t intervene when the government was committing mass murder…

If there is a message that Winter on Fire is intending to spread it’s about the resilience of the Ukrainian people and people in general. Public screenings of the documentary helped spur the 2019 Hong Kong protests against Chinese rule.

Euromaidan was not a straightforward story of suppression — there were times when, even faced with vicious force, the protestors managed to overcome the Berkut without violence, and create joy and community even amidst the bloody horror. And after 93 days, they succeeded in toppling his regime. An enormous achievement, inspiring and heartbreaking, and all the more so considering what we now know.

The protests led to Yanukovych’s resignation and the permanent disbanding of the Berkut forces, but the victory was short-lived. Putin took advantage of the vacuum of power to invade Crimea and sends troops into Eastern Ukraine, and now he threatens to subjugate the entire nation.

Winter on Fire focuses particularly on the contribution to the protests made by the “born-frees” of Ukraine — those who grew up post-independence in 1991. To see how passionately they defended their futures is a reminder of the stakes of Putin’s war. As one witnesses the snowballing conflict of Euromaiden, one can’t help but ask: “Where is the international community? Where is Nato? Why must these people fight all alone?” Now, with even more on the line, we must answer the same questions. DM/ ML

Winter on Fire: Ukraine’s Fight For Freedom is available in South Africa on Netflix and YouTube.