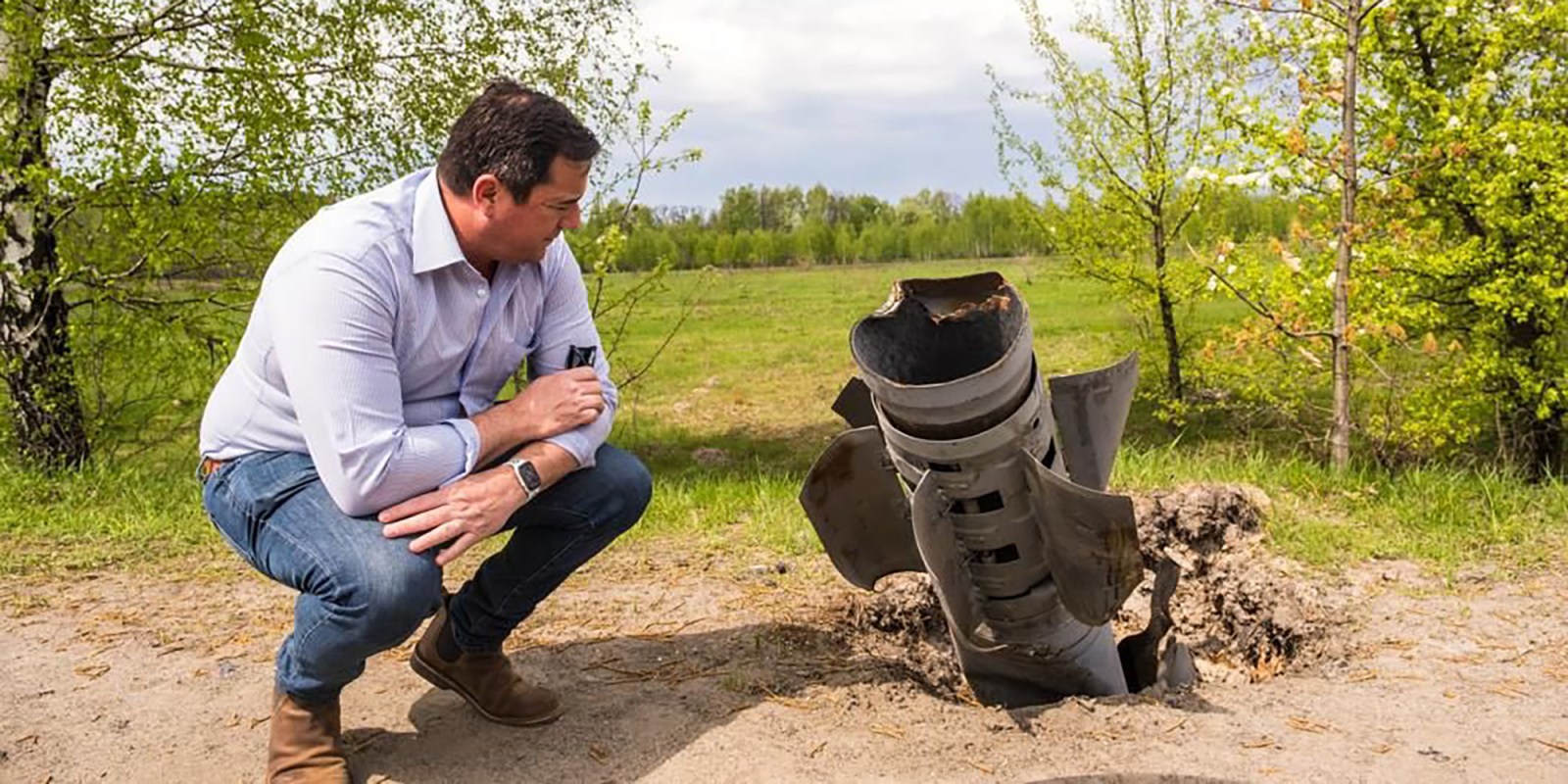 The leader of the DA has received flack - and ridicule on social media - from some political analysts and commentators for travelling to the war-torn nation on a fact-finding mission. Amid criticism of wasting money, he told Daily Maverick this week that no party or public funds were used.

DA  leader John Steenhuisen’s six-day fact-finding mission to war-torn  Ukraine has not been funded by his party.

Steenhuisen confirmed to Daily Maverick that the party has no financial involvement in his travels but he declined to reveal the funders.

His office confirmed that the donations towards his trip were not made by the Ukraine Embassy or the United Nations.

“I organised the funding for the trip myself, not one cent of DA money or public money has been used for my trip,” he said.

Steenhuisen confirmed there were two other people accompanying him, including a cameraman.

There has been public disapproval on social media  and other  media platforms  about his trip, with many criticising the DA for investing time and money on an issue which does not involve the southern African region.

My commentary on John Steenhuisen taking a trip to Ukraine and not the Cape Flats. pic.twitter.com/uLITE1SkIb

Some political analysts and commentators questioned whether his intentions for going to Ukraine are genuine or a gimmick to gain political points.

Some made jokes and created memes which have been shared on social media ridiculing the political leader.

In a more serious tone, News 24’s Quaanitah Hunter wrote in a column that the trip was a “digression|” and that the DA had “shot itself in the foot’ with its “Public Relations bungle”.

Daily Maverick spoke to Steenhuisen through his communications team during the trip, which ends on Saturday, 7 May.

Steenhuisen believes that those who have criticised him are “myopic” for assuming that his interest in Russia’s invasion of Ukraine means he does not care about issues which are unfolding locally and continentally.

The longer the Ukraine conflict lasts, the more severe and long-lasting will be the impact on fuel and food prices.https://t.co/7TLx6JYv0s

Steenhuisen referenced numerous instances where he had been present to help with local matters, starting from the July riots in KwaZulu-Natal last year, to the water crisis in Ugu and the recent flooding in KwaZulu-Natal in April.

“It is frankly farcical to suggest that, because I am out of the country for a mere six days, I have not been involved in local issues, in fact, I would challenge you to find a single other leader of a political party that has been present on the ground as much as I have been,” he said.

The leader of the official opposition questioned why there was no backlash and outrage when his political counterparts in other parties visited other countries, adding that he has also shown keen interest in the plight of opposition on the continent.

“This is frankly rather odd, especially when politicians from the ANC regularly fly to Cuba, Russia, Venezuela, China and the Middle East to pronounce on situations without a shred of criticism from the media or others.

“I have travelled to Ghana, Mozambique and Somaliland and next month will be in Kenya and the following month in Somaliland again. Additionally, I have met, and participated in several seminars on a variety of challenges facing the continent with my counterparts in Africa including Zambian president Hakainde Hichilema, Zimbabwean opposition party leader Nelson Chamisa, Namibia’s Democratic Movement president McHenry Venaani and National Unity Platform leader Bobi Wine,” he said.

The leader of the DA believes that his interest in the Russia-Ukraine conflict is justified as it has had severe consequences on the cost of living for South Africans.

“Because Ukraine is amongst the world’s biggest producers of grain, sunflower oil and fertiliser products, all of these are essential imports for our continent and country and absolutely vital for our food security. We have already witnessed the massive hikes in these products.

“Additionally, the regional conflict is going to cause fuel shortages which will drive up the prices of fuel, this will have an immediate impact on commuter prices and taxi fares as well as driving up the costs of goods exacerbating the situation further,” he said.

Steenhuisen arrived in Lviv in Western Ukraine on Sunday and has since had meetings with Ukraine MPs, including Oleksandr Feldman. National University of Kyiv Rector Volodymyr Bugrov also interacted with him.

📹 DA Leader, @jsteenhuisen, has now arrived in Kyiv the capital of Ukraine.

The Russian invasion of Ukraine is devastating, innocent people are being attacked and killed.

The effects of this war will be felt by many globally and in SA as the cost of living continues to rise. pic.twitter.com/rXvfvaJTV6

Steenhuisen has so far taken plenty of snaps during his trip. In Bucha, he is seen at a site littered with destroyed tankers, while another photo shows him standing in front of destroyed residential buildings in Kyiv.

“I visited a refugee centre on the Polish border, I then met the Mayor of Lviv Andriy Sadovyi, a political advisor for the regional government, a military specialist and the Governor of Lviv Maksym Kozytskyy,” he said.

While Steenhuisen has been received well by parliamentarians, academics and businesspeople he says that there is a general sentiment that the South African government should be more involved, seeing that Ukraine has a long history with the ANC.

“The people I have spoken to are somewhat surprised given the fact that during the struggle for freedom in South Africa they were hosts and provided training to large numbers of freedom fighters from the ANC and other organisations and they also provided spaces in their universities for exile. They are surprised that a country that fought against colonialism and imperialism would be adopting an agnostic stance in the face of these.

“The question regularly asked of me is ‘what would South Africa expect from the world if a neighbouring country invaded them?’”.

After Russia invaded Ukraine in late February 2022, the DA spoke out in solidarity with Ukraine while condemning the invasion. The DA-led City of Cape Town illuminated the City Hall in blue and yellow, the colours of the Ukraine flag. This is despite South Africa having decided to abstain from the vote on a United Nations resolution opposing the so-called “aggression against Ukraine”.

The South African government has been sitting on the fence over the issue which has raised suspicions that the country is passively supporting Russia. DM