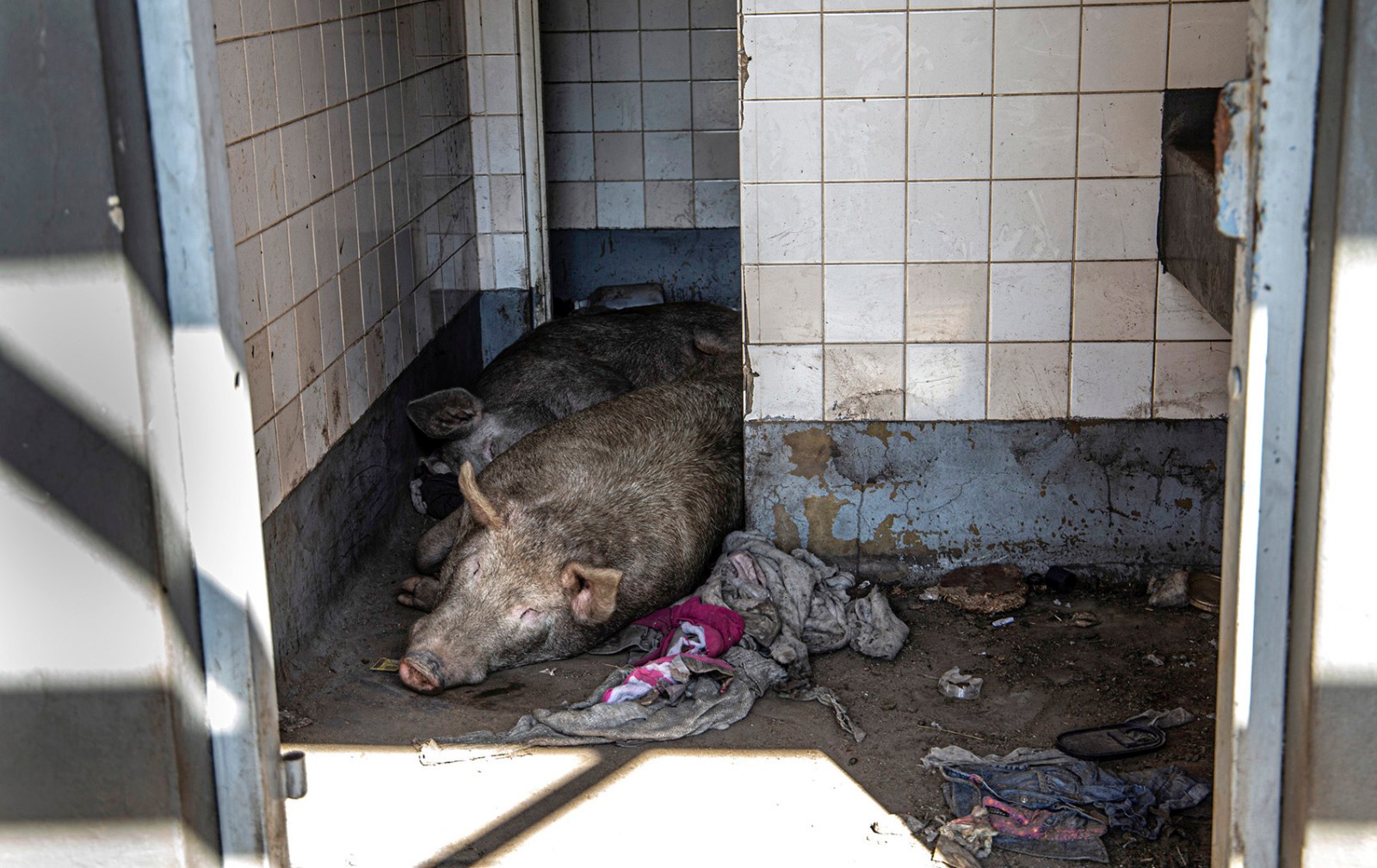 Pigs have made themselves a home in the toilets at Mlamlankuzi Station, Orlando, Soweto. (Photo: Mark Lewis) Pic 1

Countless commuters suffer every day because the trains are no longer running in South Africa’s largest township, Soweto. Photographer Mark Lewis and Tshabalira Lebakeng of the homeless writer’s project checked out the state of railway stations around Soweto.

There are parts of Gauteng where the trains have not been operating for at least two years. Infrastructure owned and operated by the Passenger Rail Agency of South Africa (Prasa) has been consistently vandalised and stolen. Factor in widespread corruption at the agency and the losses run into billions of rands.

But what we rarely see is how the mismanagement of one of the country’s most valuable assets affects ordinary commuters, especially the poor.

We started out at Mlamlankuzi station in Orlando. When we got there, we couldn’t believe what we saw. The last time I saw this station, it was clean and functioning. But what I saw on 1 May was horrible. There are pigs and goats living in the station. It’s their home. The gates are long gone — there is long grass and weeds and no toilets.

Everything has been smashed or looted.

The tunnel is now a foul-smelling toilet for vagrants and others.

I crossed to the platform where people once sat waiting for their train.  I found nothing. When I say nothing, I’m talking about the station having been stripped naked. Even the cables have been ripped down.

I asked myself if I’m still in Gauteng: “A world-class African city.”

Steven Ndlovu, 40, was sitting near the station selling fruit and vegetables. We asked him about the state of the station. He said he was a security guard, but only guarded the cellphone tower because criminals were after its batteries.

Ndlovu told us two groups of gangsters operated in the area. Some call themselves “Colombians”, others are “Russians”. He told us they once offered him a brown envelope containing R5,000 to look the other way when they were stealing. He declined.

Ndlovu believes he is lucky that he has not yet been kidnapped. “These two groups, when they want these batteries, they kidnap the security guard and take whatever they want.”

We also spoke to Zoleka, a 42-year-old woman who worked as a security guard in Johannesburg, about the death of the railways.

“Brother, I’m living next to Mlamlankunzi train station. Life was easy for me and my husband. As a security guard, we are not getting paid much, so the trains were cheaper for us. But after the trains stopped, we left our work because taxis are very expensive.

“On the trains, you pay for monthly tickets. But with taxis, we have to take from our savings. So we decided to quit our jobs because we could see all our money going on transport.”

She says they used what little savings they had to start informally selling fruit and vegetables.

Kliptown train station was even worse. It looked as if there had been a war there. It’s overgrown with bushes and weeds and there is virtually nothing left standing. There is no roof, no pavements, no roller doors, no windows. Nothing is left — it’s as if a station never existed there.

We came across four security guards and asked them about the damage to the station.

“[Transport Minister] Fikile Mbalula is the one who should be blamed. Because when the lockdown started on Level 5, many security guards lost their jobs. Mbalula kicked them out. So now, who will take care of these stations?

“There is nothing we are guarding. We’re just standing around and looking, and then we go home.”

Outside the station, we met 50-year-old Avhatakaci Muzunsa, a businessman who owns a tuckshop next to the Kliptown station. It’s been his business for the last 20 years.

He recalls how “that tuckshop built me a beautiful house back home at Venda”. He would get up at 3am to have his shop open and ready for the first customers at 4am. Those days are over.

He told us about the day the station was vandalised.

“I never saw a thing like that before. A crowd of people came to the station… some were singing. Everyone was taking whatever they wanted. I saw my community destroying their own station — the place where they were getting transport to work or wherever they wanted to go. They came during daylight… they didn’t even hide themselves.

“I saw kids climbing on top of the station removing the zinc sheets from the roof. Some of them even took useless things like Prasa signs.”

Muzunsa said that if it hadn’t been lockdown, he would have taken his children and gone back to Venda.

“But the question is, do we think people will behave well or respect the government while they do disappointing things in Parliament? People I know in my community lost their jobs. This was because, after the trains stopped, people who were getting paid peanuts couldn’t afford to take taxis to work.

“It will take years to fix this mess.”

Our last stop was the New Canada and Orlando stations. They had also been vandalised and stripped.

As we were about to take photos, we were stopped by security guards. They told us we needed permission from Prasa!

In a nutshell, Soweto’s train stations are a complete mess.