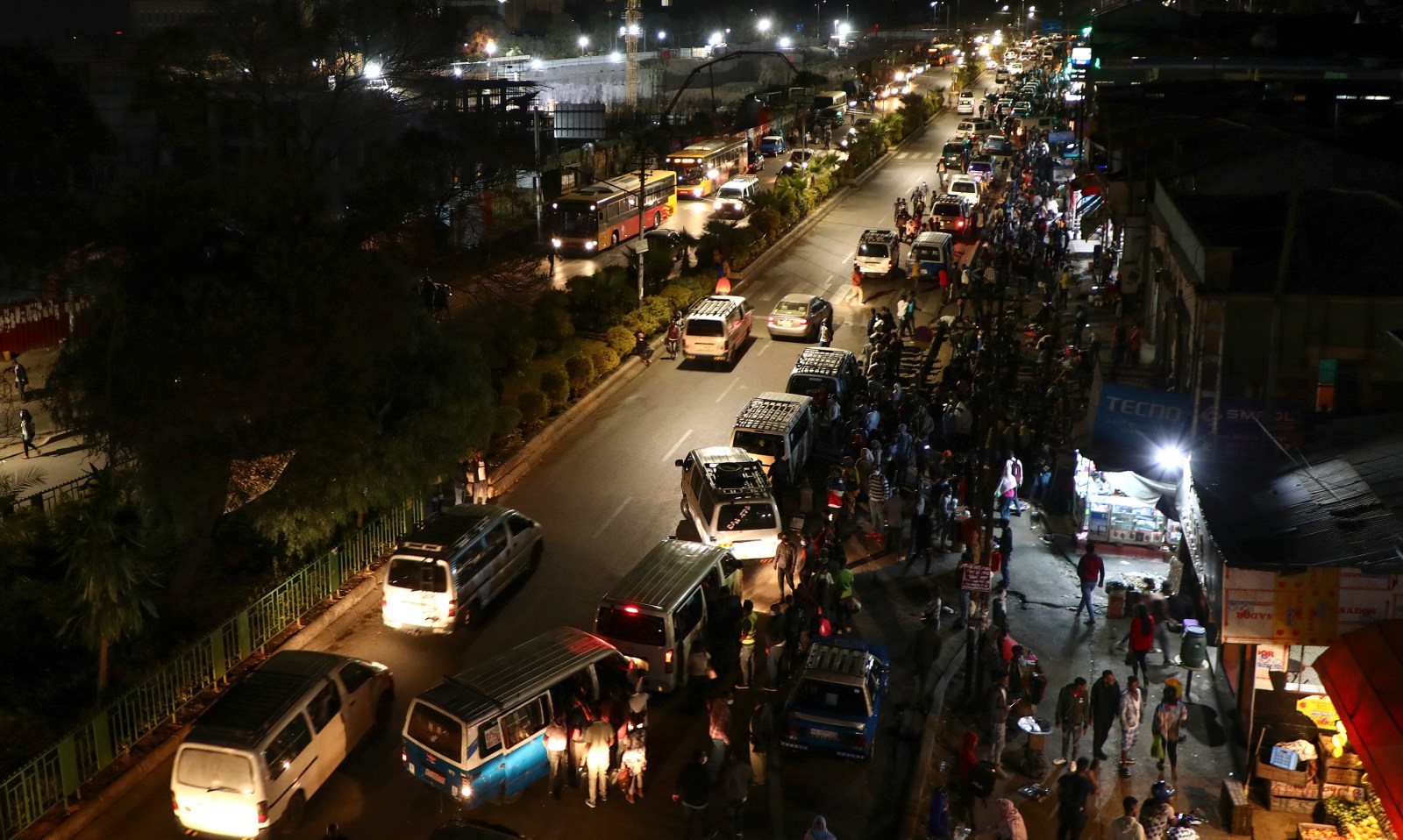 Vehicles and pedestrians move along a road in Addis Ababa, Ethiopia, 27 November 2020. Loan sharks trace motorcycle loanees, organise for the motorcycles to be stolen and then smuggle them into Ethiopia over the Moyale border, which then leaves loanees with debt coupled with loss of income. (Photo: EPA-EFE/STR)

Motorcycles are providing job opportunities for Kenya’s youth. But criminals linked to organised crime syndicates find these vehicles versatile in many ways and are using young people and their bikes for their own gain.

However, links between the motorcycle industry, unregulated loan sharks and cross-border crime are worrying. On 13 October 2021, five men were arraigned in a Nairobi court and charged with stealing 169 motorcycles worth $180,044 (KES20,300,000). The Directorate of Criminal Investigations told the court that the suspects were part of an organised crime group that recruited jobless young people interested in getting into the motorcycle transport business, known as boda boda in Kenya.

The recruitment of the jobless youth begins when unregulated loan sharks identify potential targets and provide them with motorcycle loan deposits that amount to $133 (KES15,000). This enables the youth to acquire the bike and commits them to pay the balance of $1,196 (KES135,000) over 18 months. The loan sharks trace these loanees, organise for the motorcycles to be stolen and then smuggle them into Ethiopia over the Moyale border, leaving the youth with the loan burden.

These motorcycle syndicates rely on contract law, which states that written debt contracts or signed loan contracts are enforceable. This obliges loanees (the youth) to pay for motorcycles even after they have been stolen and smuggled into Ethiopia.

Guyo Turi, an independent researcher based in Marsabit County, told Enact that motorcycle smuggling to Ethiopia was exacerbated by an influx of cheaper Chinese and Indian-made motorcycles into Kenya. There’s also high demand in Ethiopia where motorcycles are used for personal transport, to ferry goods to local markets and as taxis. He said the Moyale border point on the Kenyan side had a growing illicit market in motorcycles and spare parts (including tyres), which are supplied to southern Ethiopia.

While some bikes stolen in Nairobi and other parts of Kenya are smuggled whole, others are dismantled in urban garages in Eastleigh and Kariobangi before being packaged and transported in buses and trucks that travel the Nairobi-Moyale route. These are re-assembled in garages at Moyale and smuggled into Ethiopia through Forolle, an unmanned border point. Here transporters in trucks and buses operating along the Kenya-Ethiopia border appear to be complicit in the illicit motorcycle market in Moyale, Ethiopia.

A Nairobi-based security consultant told Enact that youths’ desperation and the lack of regulation of both the motorcycle industry and credit firms contributed to the theft and smuggling of bikes from Kenya to Ethiopia. He said Kenyan youth in urban centres were increasingly desperate due to the lack of jobs. The boda boda industry offers these youths an immediate income.

Many urban-based loan sharks have set up these profitable businesses, providing credit to young people to buy the bikes and thus hope of an income. Yet when these bikes are stolen, the youth still owe the loan sharks. They are then trapped in debt but are now worse off as their source of income is gone.

The bikes are used in other criminal activities too. A recent study by the National Crime Research Center in Kenya reported connections between the rapidly expanding public service motorcycle industry and other well-coordinated organised crime syndicates. These include human trafficking and cannabis smuggling from Sheshamane in Ethiopia to Moyale in Kenya.

In Busia town along the Kenya-Uganda border, criminals also use public service motorcycles as their preferred getaway vehicles. According to the National Crime Research Centre, the crimes committed using these bikes include the theft of motorcycle parts, assault, robbery with violence, handling and trafficking of drugs and smuggling of goods.

While calls have been made to regulate the public motorcycle industry in Kenya, similar calls are needed to enforce the Micro and Small Enterprise Act of 2012, which regulates the micro-credit industry.

From customs and law enforcement, the One-Stop Border Post in Moyale is well-positioned as a hub for scanning and monitoring trucks and buses along the Nairobi-Moyale-Addis Ababa route and identifying key actors. Intelligence sharing and cross-border cooperation among security agencies in Kenya and Ethiopia are also essential to cracking down on the theft and the operators along the criminal value chain. DM

Enact is funded by the European Union (EU). The contents of this article are the sole responsibility of the author and can under no circumstances be regarded as reflecting the position of the EU.