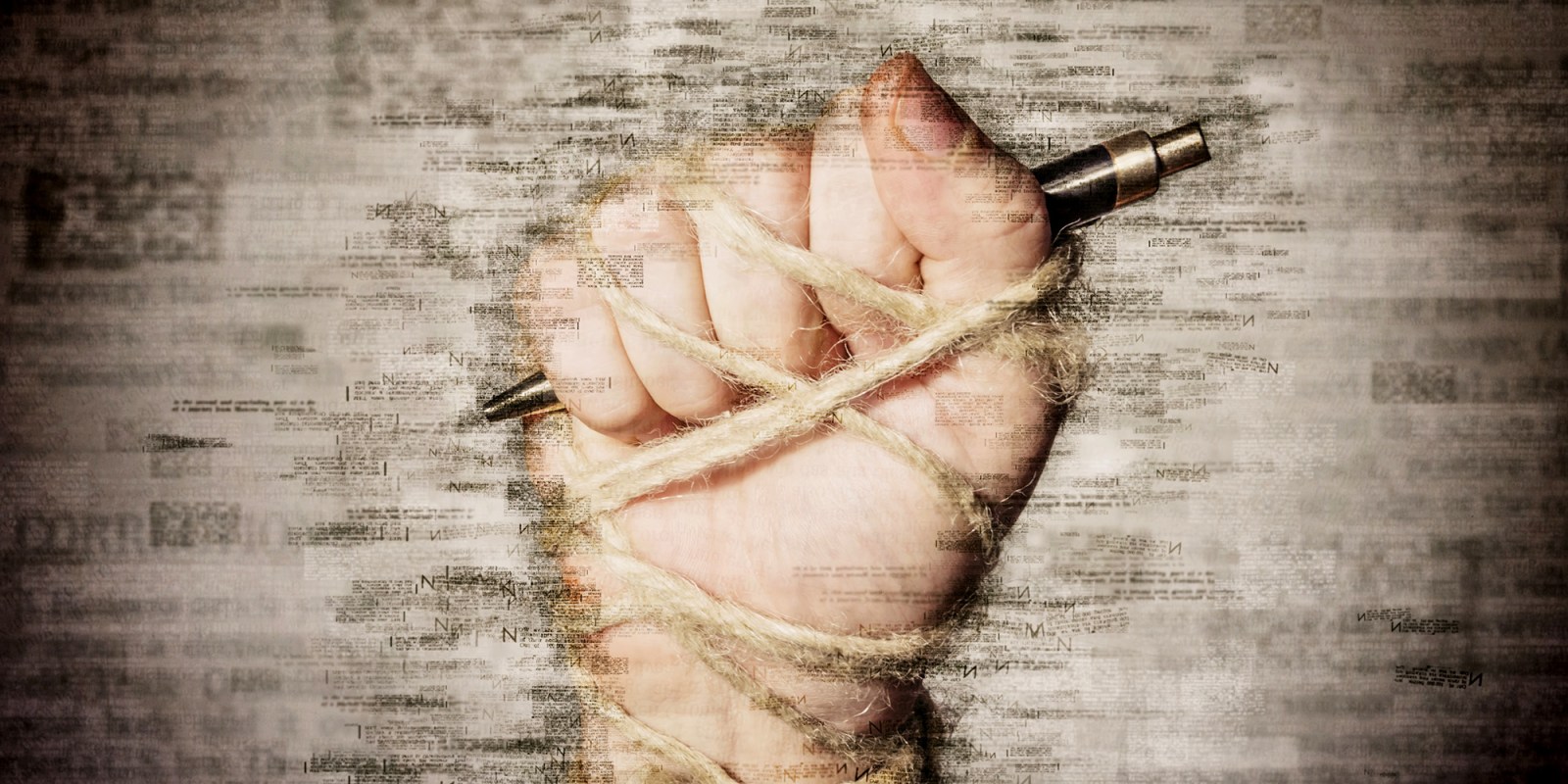 Youth Capital will launch a report on the cost of looking for work as a young person; the Hanns Seidel Foundation and the Institute for Security Studies will host a seminar on police reform; and Open Secrets will unpack Part Four of the State Capture report on its Twitter space.

Tuesday, 3 May, is World Press Freedom Day. The 2022 theme for the day is “Journalism Under Digital Siege”.

The theme is intended to highlight the multiple ways in which surveillance and digitally mediated attacks endanger journalists and journalism, according to the United Nations (UN) information page on the event.

“Surveillance can expose information gathered by journalists, including from whistle-blowers, and violates the principle of source protection, which is universally considered a prerequisite for freedom of the media and is enshrined in UN Resolutions,” stated the UN. “Surveillance may also harm the safety of journalists by disclosing sensitive private information, which could be used for arbitrary judicial harassment or attack.”

The observance of World Press Freedom Day reminds governments of the need to respect their commitment to press freedom, according to the UN. The day further serves as an opportunity to celebrate the fundamental principles of press freedom, assess the state of press freedom around the world and pay tribute to journalists who have lost their lives in the line of duty.

On Tuesday, 3 May at 11am, the Hanns Seidel Foundation, with the Institute for Security Studies (ISS), is hosting a seminar titled “Police reform is about officers, not just institutions”.

Panellists at the discussion will explore the meaning of police work in a society marred by inequality and violence. They will discuss the reforms that can address problems related to the police as an institution and the individuals that form part of it.

The chairperson for the discussion is Dr Andrew Faull, a senior researcher for justice and violence prevention at the ISS. Speakers include Rofhiwa Maneta, a freelance journalist and author of A Man, a Fire, a Corpse, and Ziyanda Stuurman, the author of Can We Be Safe? The Future of Policing in South Africa. 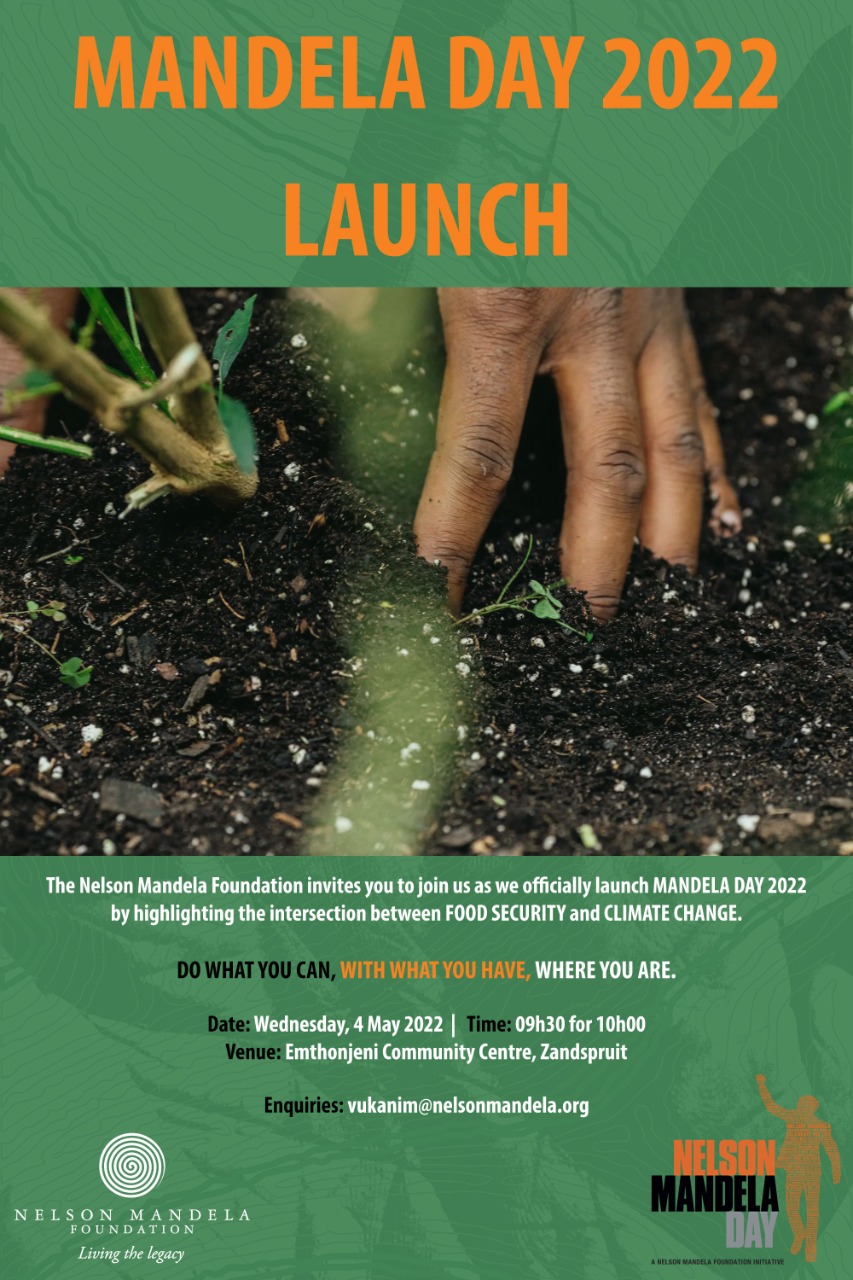 On Wednesday, 4 April at 9.30am, the Nelson Mandela Foundation will launch Mandela Day 2022 at Emthonjeni Community Centre, Zandspruit. The launch will highlight the intersection between food security and climate change. 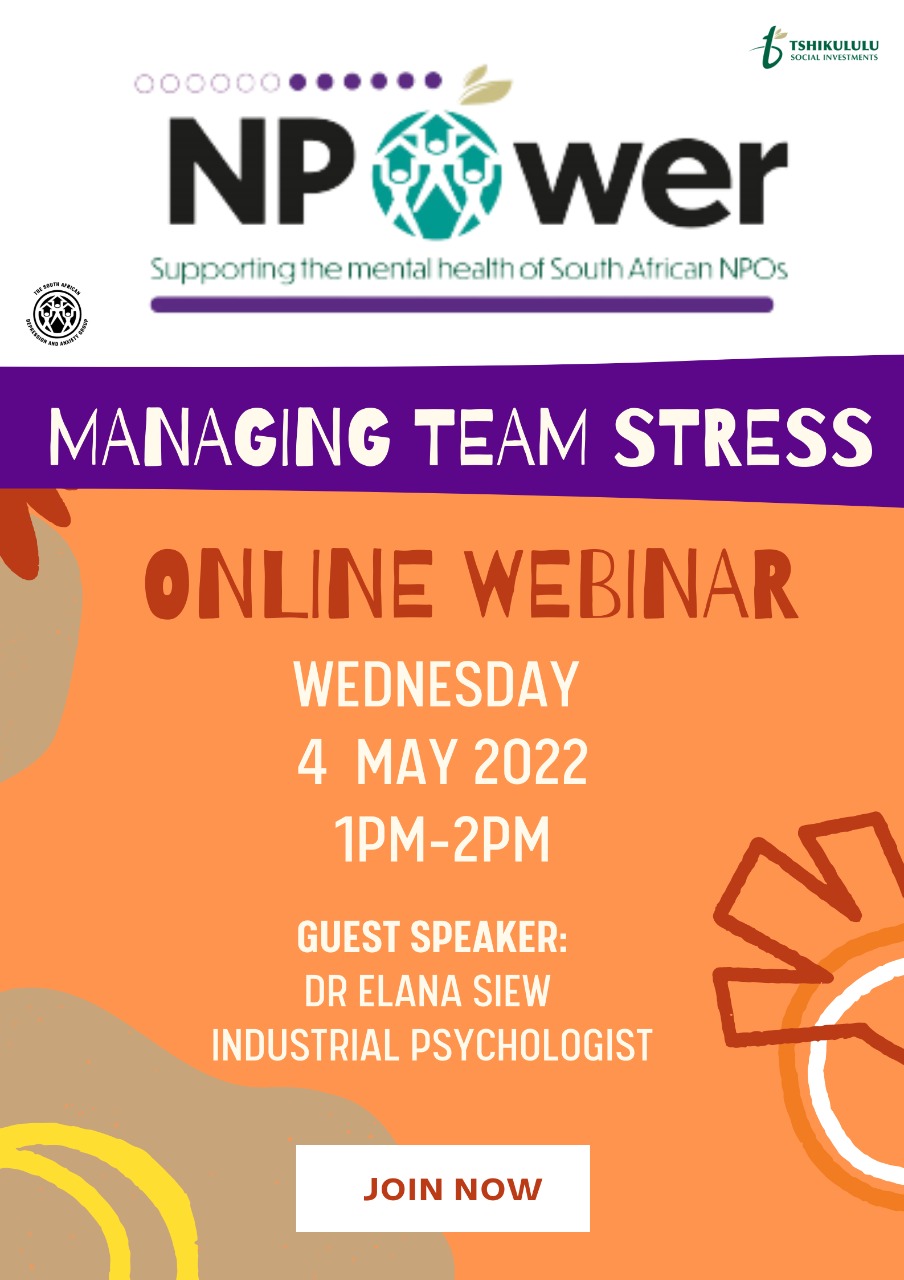 On Wednesday at 1pm, NPOwer will hold a webinar on managing stress as an individual and a team.

At 2pm, the South African Research Chairs Initiative will host a webinar on The Russian Invasion of Ukraine: International Law and the Making of Peace: Problems, Processes, and Solutions. 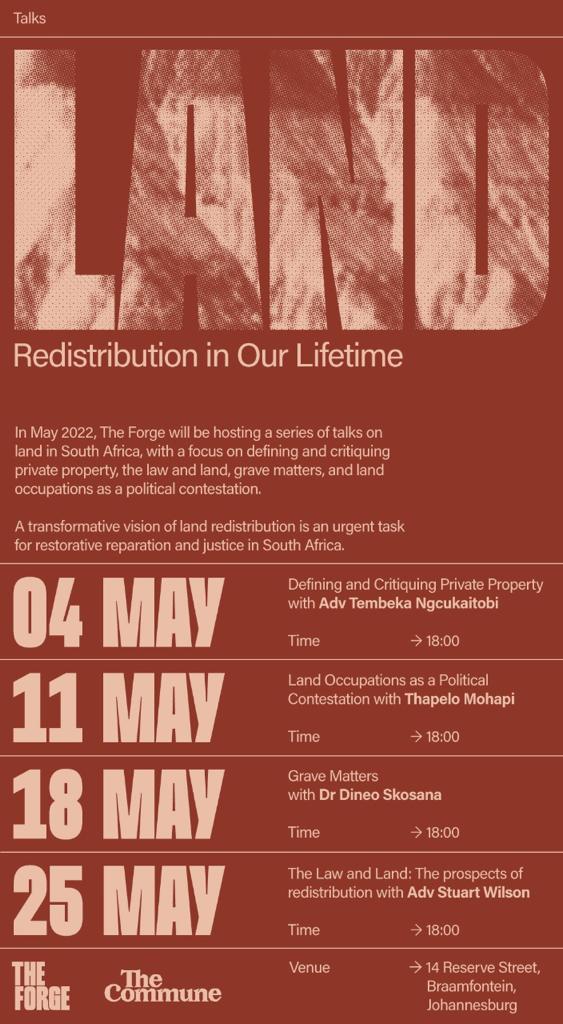 On Wednesday at 6pm, the Forge is holding a talk on Defining and Critiquing Private Property. The venue for the discussion is 14 Reserve Street, Braamfontein, Johannesburg. The speaker is advocate Tembeka Ngcukaitobi.

The talk forms part of a series of events around the theme of Land Redistribution in our Lifetime. Among the issues that will be explored are the law and land, grave matters and land occupations as a political contestation.

“A transformative vision of land redistribution is an urgent task for restorative reparation and justice in South Africa,” according to the event poster.

Thursday, 5 April is World Portuguese Language Day. The Portuguese language is one of the most widespread in the world, with more than 265 million speakers on all continents, according to the Unesco information page on the event.

Portuguese is the most widely spoken language in the Southern Hemisphere and remains a major language of international communication. 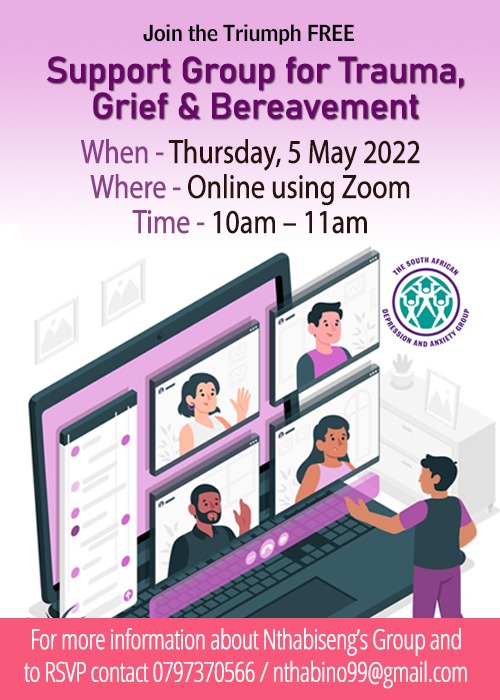 On Thursday 5 April at 9am, the Presidential Climate Commission (PCC) is holding its Just Transition Framework multistakeholder conference in Johannesburg. This comes after a series of engagements between the PCC and communities throughout South Africa during March and April.

The multistakeholder dialogue is an opportunity for stakeholders and social partners to share their views on what constitutes a just transition to a low-carbon, climate resilient economy and society, according to the event description. It will further allow the building of trust and understanding between various parties.

“The dialogue will inform recommendations from the Commission to government on the just transition, to be made by mid-2022,” stated the description.

The first day of the conference will run until 5pm. A livestream of the proceedings is available here.

The second day of the conference, on Friday 6 April, will run from 9am to 1pm. A livestream of this stage of the event is available here.

At 10am on Thursday, the South African Depression and Anxiety Group (Sadag) is launching a new free support group for trauma, grief and bereavement. The meeting will take place via Zoom. 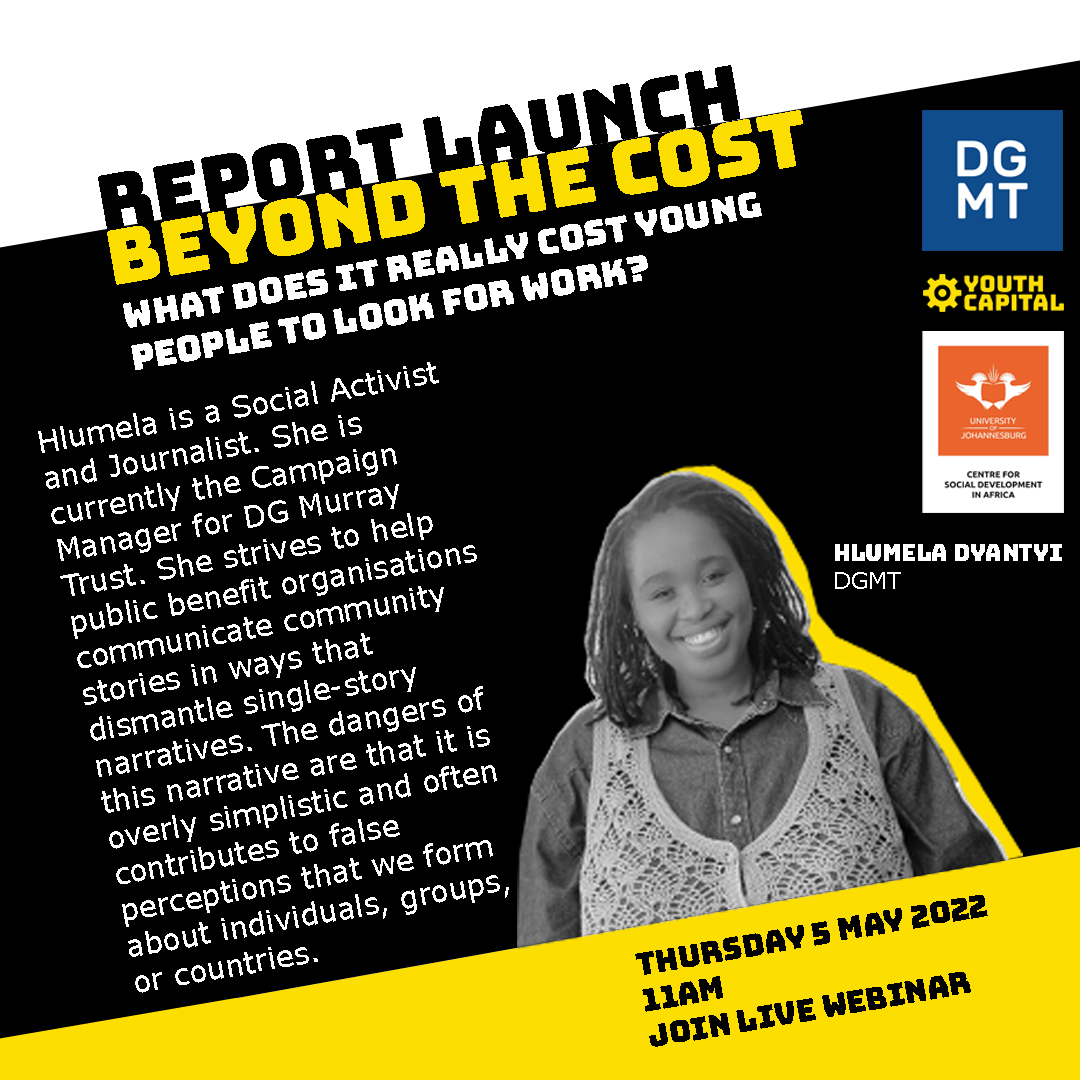 On Thursday at 11am, there will be a virtual launch of Youth Capital’s latest research report, Beyond the cost: what does it really cost young people to look for work? The report offers an updated financial estimate of the full range of costs that young job-seekers face, while also providing insights into how zero-rated and low-data platforms are being used by this population.

“The report further outlines how job-seeking costs go beyond the financial implications and calls for holistic solutions to reduce the barriers that young people face when attempting to enter the labour market,” according to the event description.

Those speaking at the event are Professor Lauren Graham of the Centre for Social Development in Africa at the University of Johannesburg, Kristal Duncan-Williams from Youth Capital and Duma Gqubule, a researcher and financial journalist. The event will be facilitated by Hlumela Dyantyi of the DG Murray Trust. 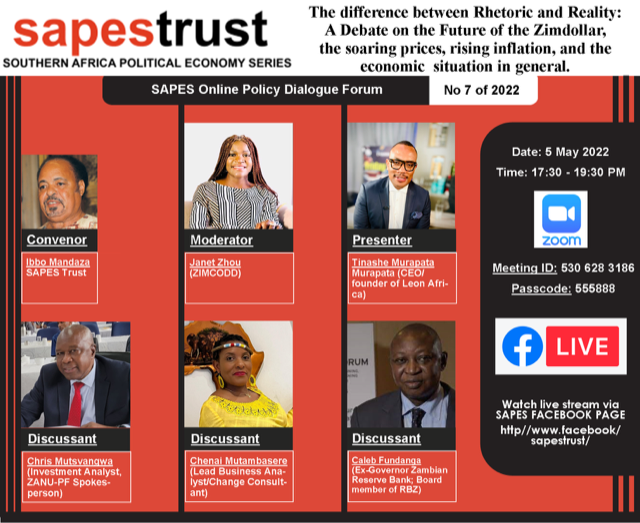 On Thursday at 5.30pm, Sapes Trust is hosting a webinar on The Difference Between Rhetoric and Reality: A Debate on the Future of the Zim Dollar. The discussion will explore soaring prices, rising inflation and the economic situation in general in Zimbabwe.

“The latest economic data shows rapidly rising inflation, raising all the fears of a return to the horror days of 2008. Economist Steven Hanke argues that Zimbabwe now has the highest inflation rate in the world, higher than even Venezuela,” stated the event description.

Speakers at the event are Chris Mutsvangwa, an investment analyst and Zanu-PF spokesperson; Chenai Mutambasere, a lead business analyst and change consultant; and Caleb Fundanga, the ex-governor of the Bank of Zambia.

On Thursday at 6.30pm, there will be a launch for the book Beyond Fear, the testimony of anti-apartheid revolutionary Ebrahim Ebrahim. The launch will take place at the CineCentre Killarney, Killarney Mall, Johannesburg.

Ebrahim was one of the founding members of Umkhonto weSizwe (MK), playing a central role in directing the sabotage campaign of the early 1960s, according to the event description. He spent two stints on Robben Island and was released for the second time in February 1991.

Among those speaking at the launch are Shannon Ebrahim, the partner of the late Ebrahim Ebrahim; Aboobaker Moosa, the CEO of Avalon Group; Ronnie Kasrils, the former minister of intelligence in South Africa and an MK veteran; and Yunis Shaik, a former trade unionist, member of MK, lawyer and CEO of eTV’s holding company. 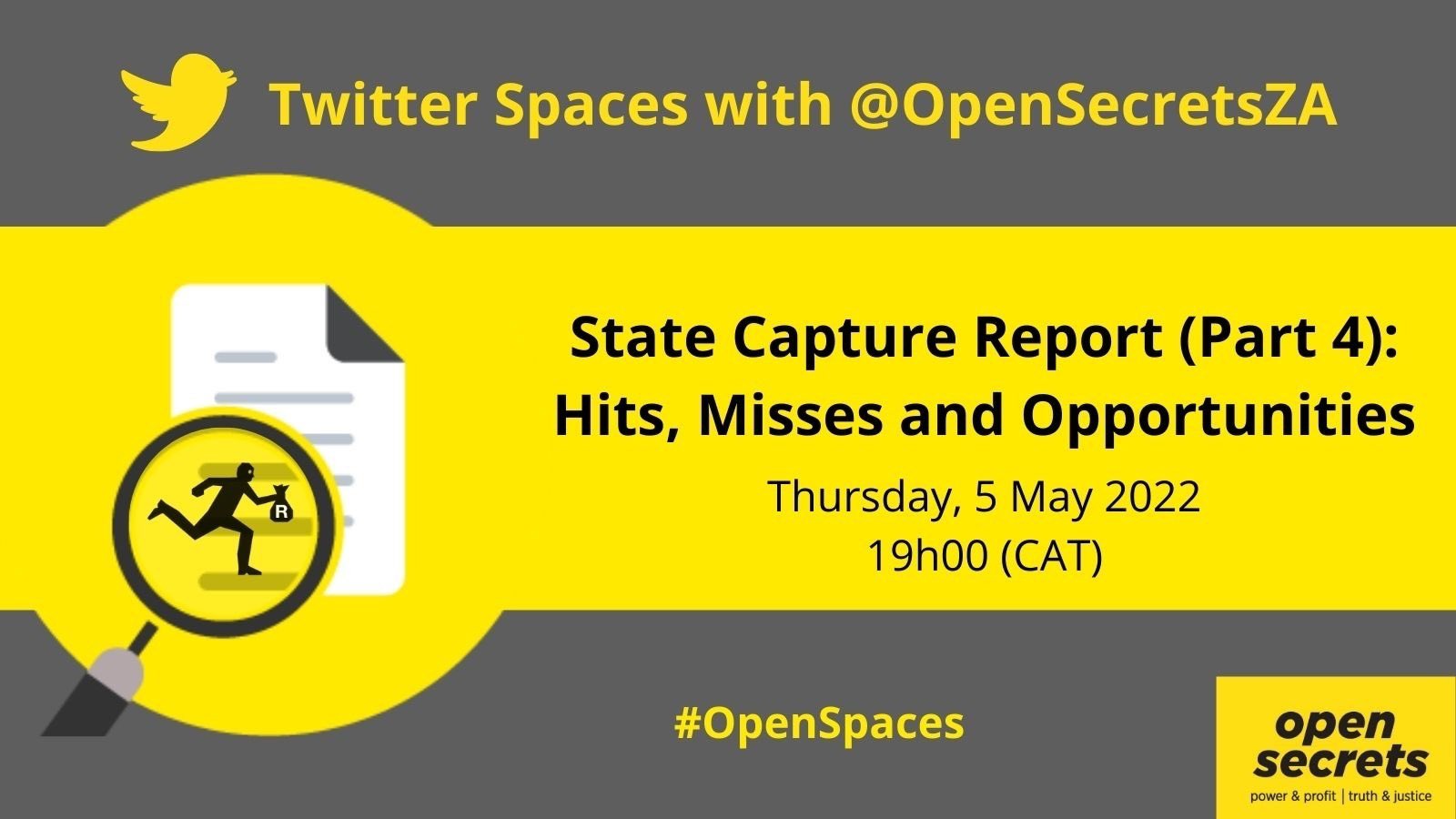 On Thursday at 7pm, Open Secrets will host a discussion on Part Four of the State Capture report on their Twitter Space. This will involve examining the “Hits, Misses and Opportunities” of Part Four of the report. 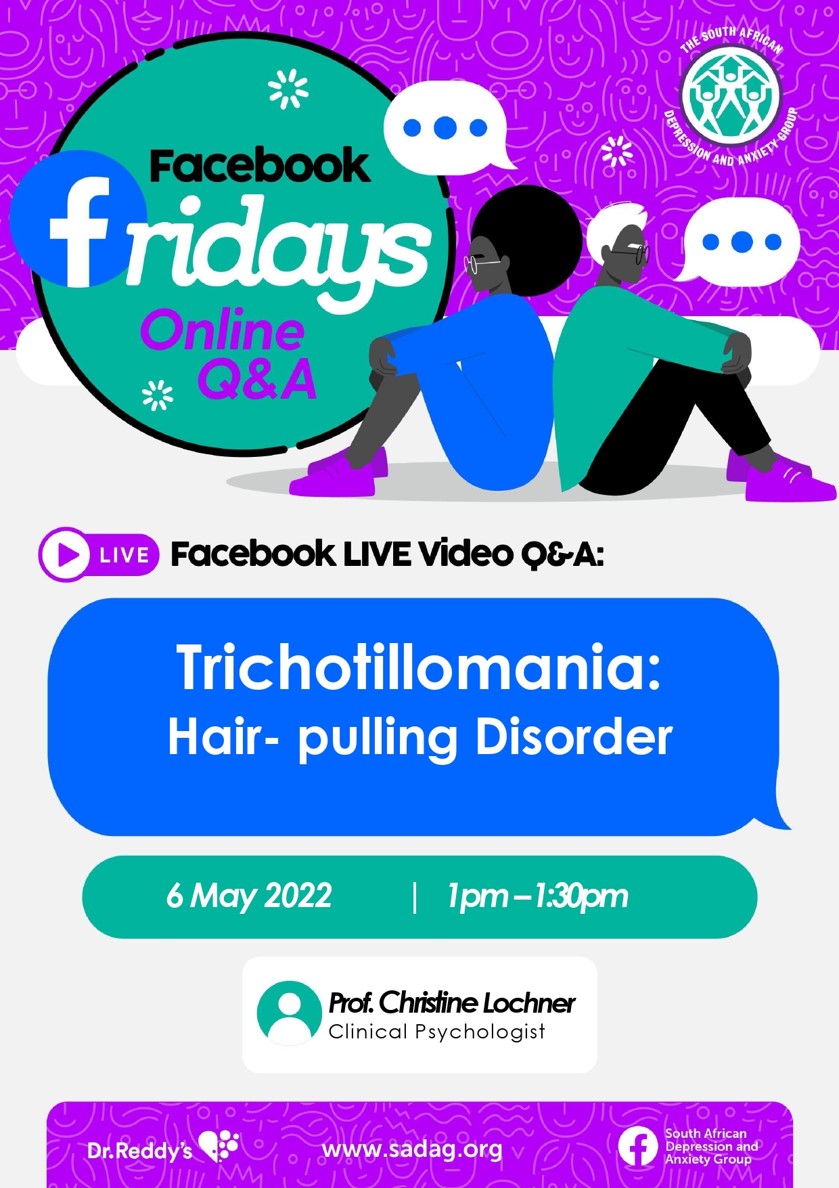 On Friday, 6 April at 1pm, Sadag will host a Facebook live discussion on trichotillomania (hair-pulling disorder). Professor Christine Lochner, a clinical psychologist, will talk about the causes and treatment of the disorder.