The bulls and bears weigh up what’s behind investment... 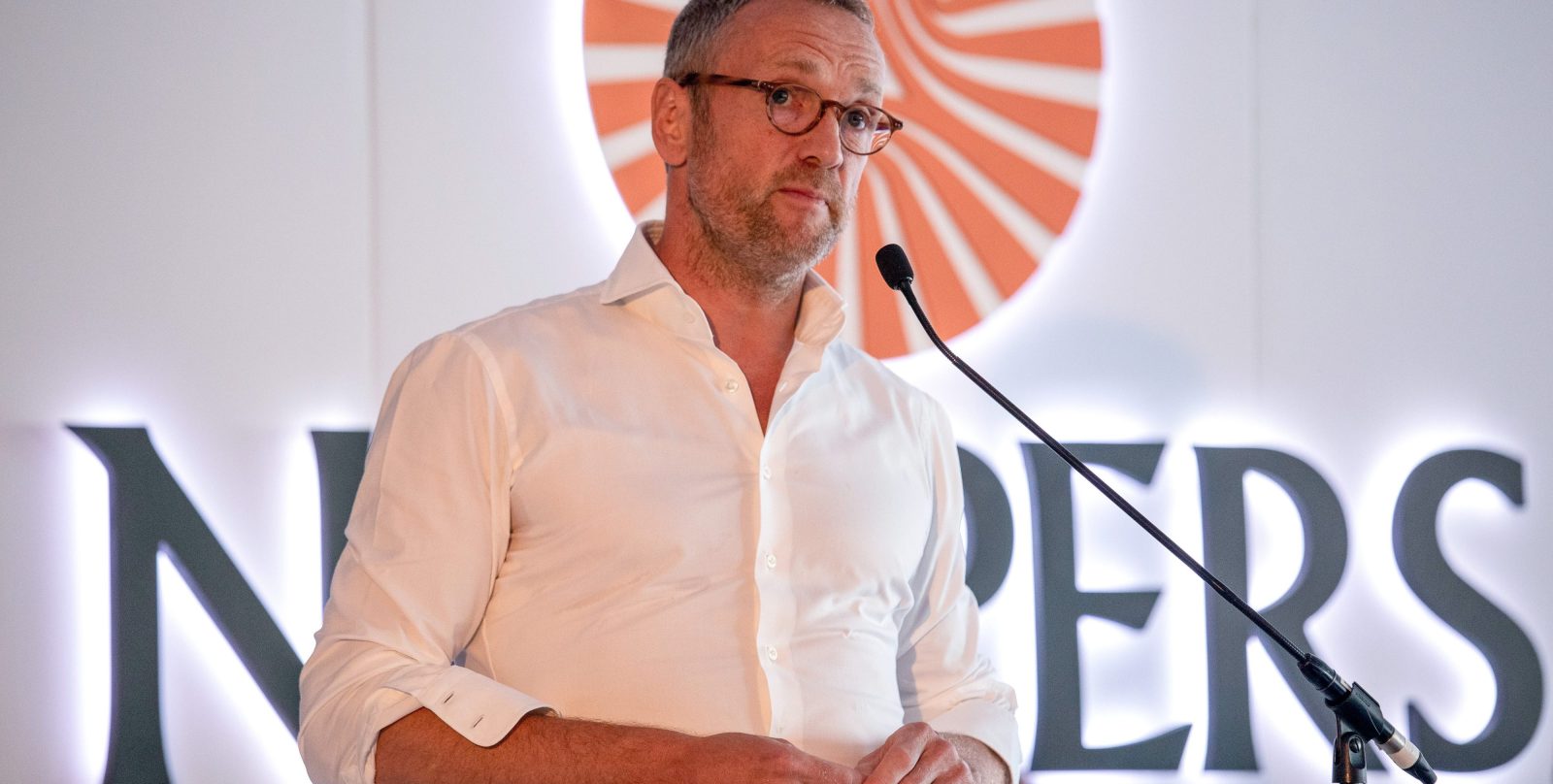 “In the short run, the market is a voting machine but, in the long run, it is a weighing machine,” economist Benjamin Graham, the father of value investing, once advised.

It is particularly appropriate in the current environment where markets appear more interested in short-term asset price movements than longer-term fundamentals.

The irony in applying Graham’s advice to more recent drawdowns in Naspers (pullbacks from the peak) is that it is likely to lead investors to very different conclusions.

Naspers once constituted about 25% of the JSE Shareholder Weighted Index (SWIX) and has been a significant contributor to the performance of South African equities over the past 15 years.

Recent market moves and, more specifically, the deep drawdown and subsequent rebound on 15 and 16 March this year do appear to be a particular anomaly, with investor sentiment seemingly fluctuating from deep despair to extreme exuberance over the two days.

From a fundamental perspective, there was no new news that would justify price swings of greater than 15% across both days. The sell-off was largely attributed to the market’s increased concern about accelerating geopolitical risks and expectations that ties with Russia could increase the probability of sanctions being imposed on Chinese listed companies.

US-listed Chinese stocks also continued to attract attention from regulators, with specific concerns about possible delistings from US exchanges contributing to a further derating of Chinese tech stocks.

Rising Covid numbers reported in China further unnerved markets, given the risk of the government’s zero-tolerance model potentially moving the country back into harder lockdowns and restrictions.

The subsequent rebound was attributed to a statement by China’s highest financial authority that reiterated its commitment to maintaining stability in local real estate and capital markets. The statement indicated that the clamping down on Chinese tech was nearing conclusion and that discussions with the relevant regulators on US-listed Chinese stocks were progressing well.

Although the price declines in March have captured a fair amount of attention, both Naspers and Prosus have been under substantial pressure over the past 12 months. 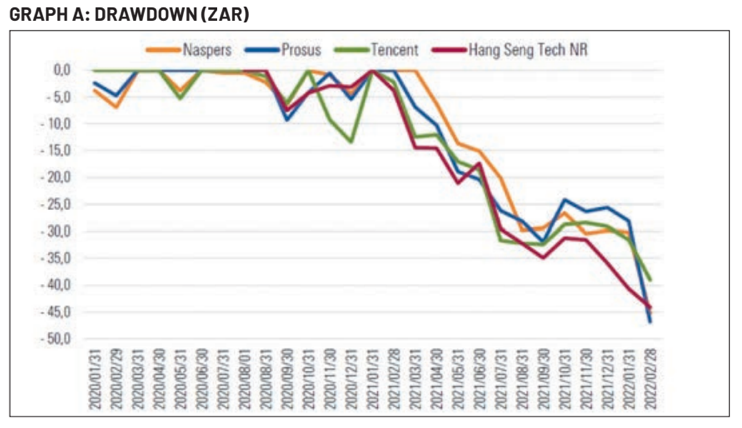 Graph A, displaying the drawdown of both companies against both Tencent and the Hang Seng Tech Index, shows that these stocks have been selling off for at least the past 12 months with drawdowns of greater than 45%.

The graph also demonstrates that these moves are not necessarily independent of moves in the broader Chinese tech market.

Price declines in both Naspers and Prosus are relatively consistent with drawdowns for the large Chinese tech companies over the past 12 months. This suggests that more recent drawdowns are more attributable to factors adversely affecting the pricing of broader Chinese tech in aggregate as opposed to more company-specific fundamentals. 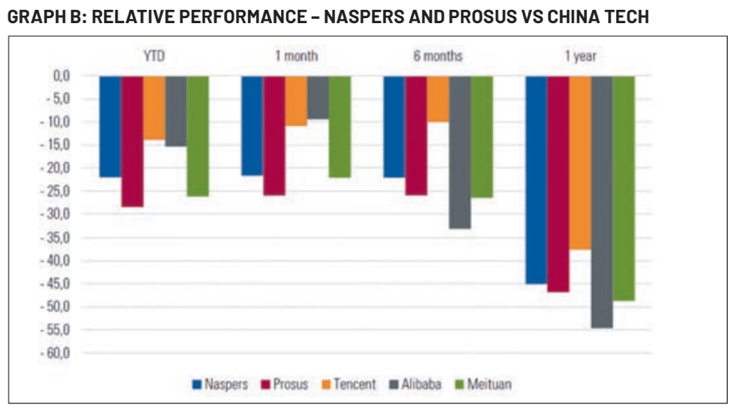 Graph B breaks out the top three constituents of the Hang Seng Tech index – Tencent, Alibaba and Meituan – and compares performance over the past 12 months with Naspers and Prosus.

The Chinese government has intervened significantly in these companies over the past year, with a focus on anti-monopoly regulation, as well as data privacy and protection.

The graph also shows that Tencent drawdowns have been relatively muted when compared with its peers. Alibaba and Meituan initially attracted more regulatory attention, whereas Tencent has recently become subject to increased government scrutiny through a probe into WeChat.

The company faces potential fines for violating anti-money-laundering rules via the platform and could be liable for breaching know-your-customer requirements, given the use of WeChat and WeChat Pay for potentially unlawful transactions.

It does appear that price declines in both Naspers and Prosus over the past six months have decoupled somewhat relative to Tencent.

Although drawdowns in Naspers and Prosus are largely an outcome of a crackdown on Tencent and broader Chinese tech, there have also been company-specific risks that have contributed to both companies’ derating.

Prosus came under increased pressure after sanctions were imposed on Russia after its invasion of Ukraine. The company impaired its 25.9% stake in VK Group, previously known as Mail.Ru, which was valued at about $700-million.

The Moscow-based internet company is one of Russia’s largest online platforms, and its VKontakte social network provides similar services to Facebook.

Sizing up the fundamentals 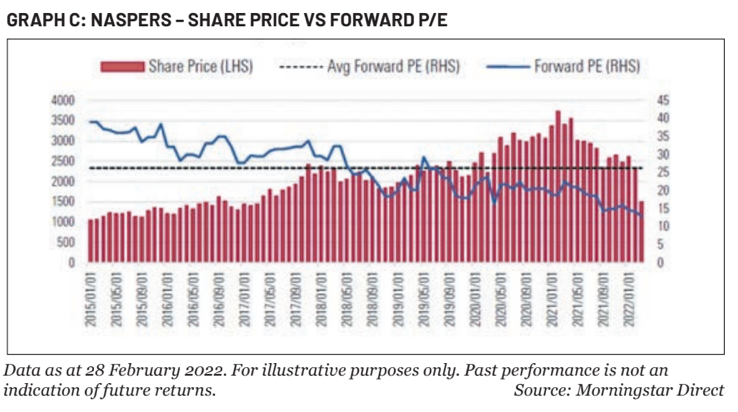 Graph C considers the valuation of Naspers, as the parent company, relative to its share price over the past seven years. The company is trading at levels that suggest the long-term investment thesis has been impaired by more recent market and regulatory events.

The graph also shows that, from a valuation perspective, Naspers is trading at a discount to fair value using forward price:earnings (P:E) multiples as an estimate. The current P:E of 12 is well below our estimated fair value of 26x, which suggests that more recent drawdowns are somewhat overdone.

The discount that both Naspers and Prosus trade at relative to net asset value is at historical highs, whereas balance sheets are well capitalised with relatively high-quality assets capable of fetching reasonable bids in both public and private markets.

Management has previously attempted to lower the discount through the unbundling of assets such as MultiChoice, as well as the separate listing of Prosus in 2019, without much success.

There are, however, valid reasons that have contributed to the persistence of this discount over time that continue to detract from the overall Naspers investment thesis. These include: the complexity of the shareholding and voting structure; a complicated cross-holding structure between Naspers and Prosus; the size of potential tax liabilities; and a relatively opaque management incentive and compensation structure.

The most contentious issue, however, relates to the uncertainty about the economic rights of foreign investors in Chinese companies held in variable interest entities (VIEs). The structure only allows non-Chinese shareholders an economic claim on cash flows without any legal ownership claims on any underlying assets.

Given that most South African investors looking for a cheaper entry point into Tencent would access the investment through Naspers, the VIE structure does present a significant regulatory risk that is especially difficult to quantify. DM168

Sean Neethling is a portfolio manager at Morningstar Investment Management.