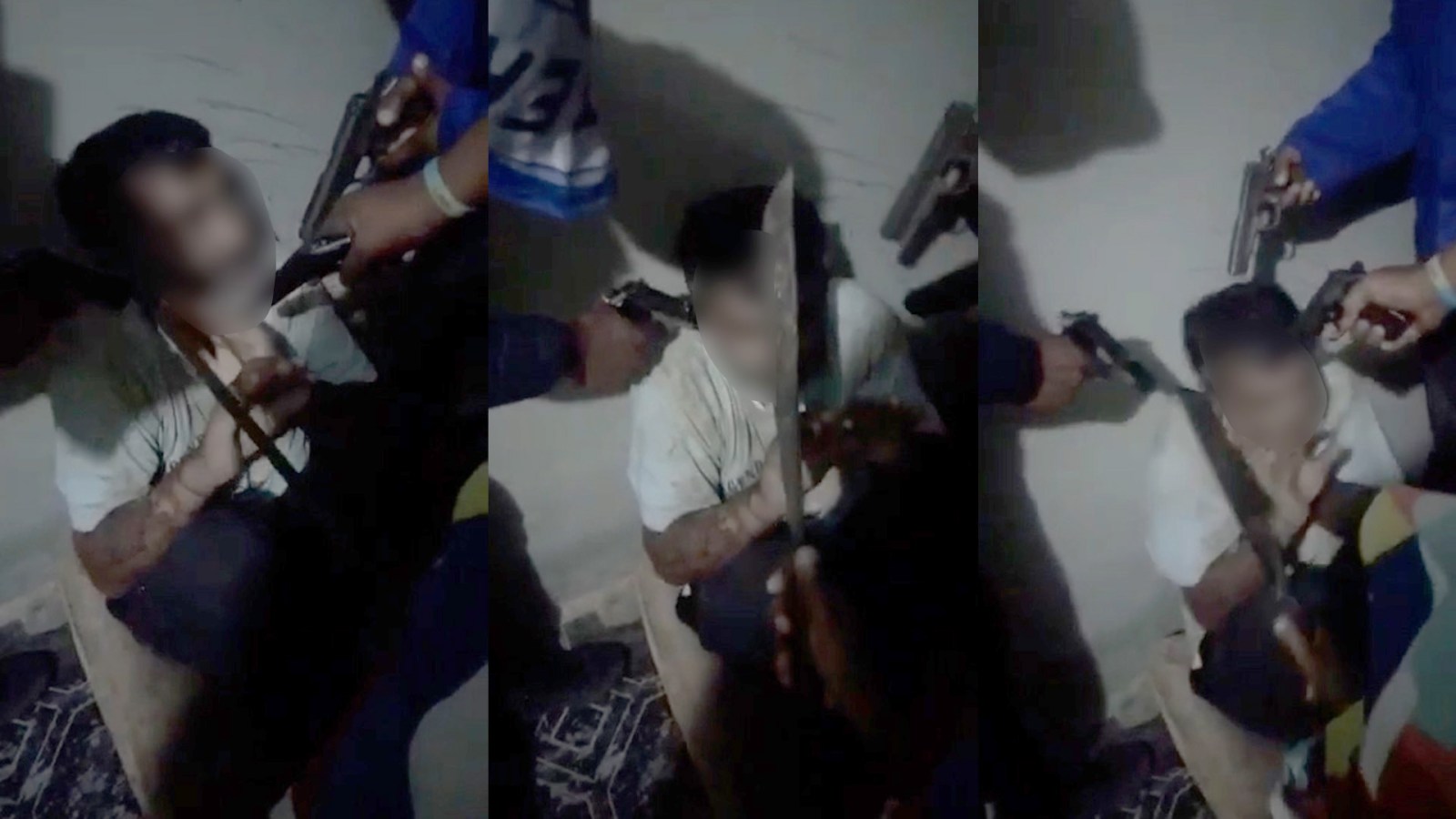 Stills from a video taken by kidnappers of one of their victims and sent to his friend, another Pakistani businessman, demanding a ransom. (Photo: Supplied by Groundup)

Hawks say they are investigating 14 cases, mainly in rural areas of the province.

The Hawks are investigating 14 cases of immigrants kidnapped for ransom in the past few months in the Eastern Cape. The victims are usually owners of businesses such as hardware stores and spaza shops in small towns.

Provincial Hawks spokesperson Yolisa Mgolodela said most of the cases were in rural areas. Its East London office is investigating cases of such kidnappings in Ngqamakhwe, Komani and Msobomvu (in Butterworth), three in Willowvale, and one in Duncan Village, East London. The Mthatha office is investigating kidnappings in Tsomo, Cofimvaba, Port St Johns and Mthatha, and three in Ngcobo.

Mgolodela said the Hawks have arrested four suspects linked to one case and the matter is before court.

Originally from Pakistan, an Mthatha-based businessman in Slovo Park, tells a dramatic story. “It was on Sunday 6 March around 9am, when these guys came into the store, pulled out guns and took all the staff hostage.”

Six of his employees were South Africans.

The robbers took all the money in the till. Then they demanded the keys to his bakkie. They forced only the two employees who are Pakistani to go with them. About two kilometres away they transferred them to a waiting car.

The kidnappers called in the afternoon demanding a ransom of R10-million.

“We told them that we don’t have that amount of money and that those Pakistanis were just employees.

“The matter was already reported to the police by the time they called us and they advised us to inform them once we receive the call. The police also advised us not to make any settlement without their knowledge.

“So, we informed them and they continued to advise us until we reached a settlement amount.”

He would not disclose what ransom was paid for the release of his two employees.

He said Pakistani immigrants are living in fear, wondering who will be the next.

Another Pakistani national, Basil (name changed), said he was kidnapped at his hardware store in a village 15km from Ngcobo on 3 April. Three men turned up at his store in the afternoon, saying they wanted to buy 1,000 bricks.

He was counting the bricks when one pulled a gun and ordered him to lie down. They blindfolded him and started ransacking the shop for money.

“When they were not happy with what they managed to get, they started demanding that I take them to where I keep all my money. When I said that was all the money I have, they took me into the car and drove off to the place where they kept me.”

Basil said the kidnappers held him eight days and tortured him. He does not know where he was held. They pointed guns at his head, hit him with their guns, a machete, a sjambok and beer bottles. They poured boiling water and melted plastic bags on him.

“They captured this on video, which was then sent to other Pakistani nationals that are close to me, so that they can find the ransom money that is being asked,” he said.

He gave them the phone number of a friend and they sent the video to him.

GroundUp has seen the video.

We spoke to Basil recovering in bed at a friend’s house. He was still in pain.

“Sometimes they would make a phone call, put the phone on the speaker, then beat me so that Ali [name changed] could hear what was going on. They were starving me and would give me slices of bread once a day,” he said.

Ali also owns a hardware store at Ngcobo. He said he was shocked when he received the video sent from Basil’s phone. He could see Basil begging for his life.

The kidnappers initially demanded R5-million. Ali told them that running a small rural shop they had nothing like that amount.

“They said I must raise the money from other Pakistanis or else we will never see where he is buried. They will only send us samples.

“I went to report the matter to the police at Ngcobo and the police could only assist in advising us on how we should negotiate.”

Ali disclosed what they paid in the end, a tiny fraction of the original demand.

When they reached an agreement the kidnappers sent them to three locations around Mthatha.

“They first tell you where to meet them but when you arrive there you won’t see anybody. I think they want to monitor you, to make sure that you are not coming with the police.”

In the end, they told him to leave the money at a bus shelter.

Basil said he was released by midnight and left at Mbhashe River Bridge.

“They told me that I can go home now, I’m at Xuka River Bridge, I must walk straight, I will get to Ngcobo. But after a long walk, I realised that the road does not lead me to Ngcobo. I didn’t know where I was. I then knocked at a few houses in the village, but people were scared … until someone opened for me and allowed me to sleep until it was brighter outside. I didn’t even sleep,” said Basil.

Ali knows of two other cases in Ngcobo in the last three months.

“We are not making a lot of money. We are renting the premises where we operate our businesses and we also rent where we live. We are paying our staff and municipal bills for water and electricity, so people must not think we have plenty of money lying around,” he said.

A Pakistani businessman told GroundUp: “We are creating employment and we are also contributing to the economy, and we are calling on the South African government to do more to protect us.” DM