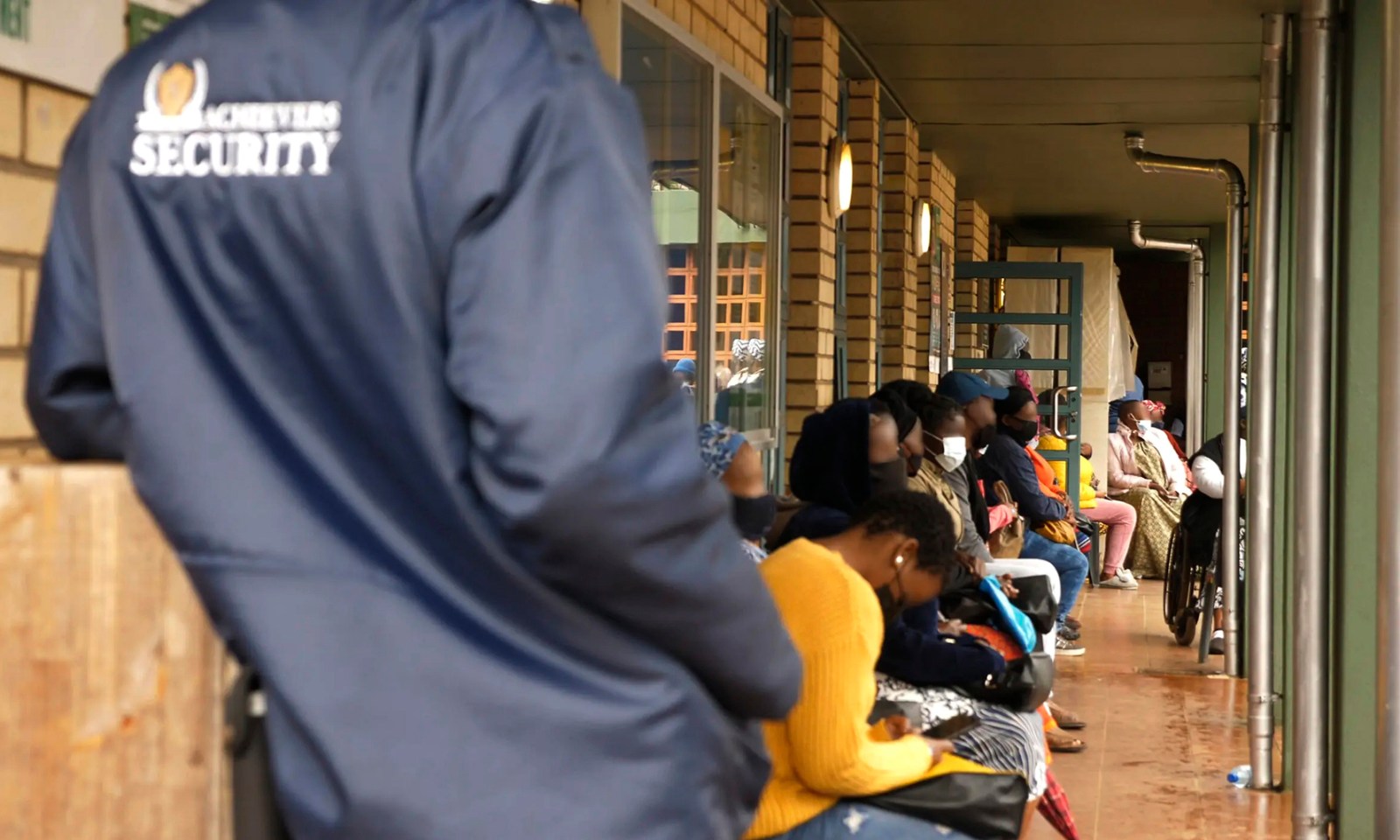 The nursing union Denosa expressed concern over safety and security at public health facilities, saying it is not only a Western Cape problem, but a national crisis. (Photo: Rian Horn / Ritshidze / Spotlight)

Public healthcare facilities in the Western Cape and the City of Cape Town have reported significant numbers of security incidents over the past year.

Mark van der Heever, the spokesperson for the Western Cape Department of Health, says their staff members are often victims of verbal abuse, theft and damage to property, while physical assaults are typically patient-on-patient.

In the year from April 2020 to March 2021, he says, there were 996 incidents — including verbal abuse, theft/burglary, damage to property and staff absconding. Figures for the first nine months of the following year look similar, with 857 incidents from April 2021 to December 2021.

For clinics run by the City of Cape Town, councillor Patricia van der Ross, the mayoral committee member for community service and health, says 138 safety and security incidents occurred from July 2021 to February 2022.

“These incidents include vandalism, destruction of property, theft of city staff and clients’ property, community unrest, robberies at knife or gunpoint, shootings, gang violence, hijacking and threatening behaviour by communities.

“No city health personnel were injured during the incidents, but staff are always left traumatised. Security persons have been injured,” she says.

Sibongiseni Delihlazo, the national spokesperson for the trade union Denosa, says the safety of healthcare workers and patients is being compromised in the public sector, largely because of budget cuts for personnel and resources.

“The fact that healthcare centres are gun-free zones makes healthcare facilities easy targets for crimes in the communities. Nurses sometimes have their cars taken away from the parking lot, all because of the knowledge that there are few security [officers] and they are not well-armed to protect staff and patients.

“There are incidents where patients had been finished off inside healthcare facilities (not necessarily in the Western Cape), which just talks to the bigger problem at hand when it comes to security,” says Delihlazo.

Not all incidents are reported and official records may thus be an undercount. Delihlazo says these attacks lower staff morale and the motivation to work.

“So they work with that anxiety at the back of their mind,” he says. He points out that healthcare workers may decide against working at unsafe facilities, which in turn deprives those communities of their services.

“It’s not only a Western Cape problem — it is generally a national crisis,” Delihlazo says.

Dr Akhtar Hussain, the chairperson of the South African Medical Association’s Public Sector Advocacy Forum, has similar concerns. He says safety and security in care institutions are very poor in all provinces.

“In some areas, security is non-existent. Hospitals, clinics, emergency medical services, including patients, are even not safe,” he says.

Hussain charges that the provincial health department is not maintaining minimal standards of safety and security.

“For example, in 2021 there was serious violence and intimidation, hijackings, [and] robbery on healthcare workers that led to calls for the closure of three clinics — Weltevreden Valley Clinic, Crossroads Community Healthcare Centre and Mzamomhle  Clinic. It started with the stealing of cellular phones, laptops, handbags and money. Then there was the stealing of hospital instruments, medicine — the list is long,” says Hussain.

He suggests the problem is that too few security guards are employed — either directly by the government or by private companies — and that many of those who are employed have not been properly trained.

Delihlazo agrees the number of security guards at healthcare facilities is extremely low and far from enough. He says that ordinarily, security guards would be stationed between the gate and the entrance.

“But delinquents already know this and would devise means of overcoming it through gaining entry on the side of the yard or entering from the back only to overpower the security at the entrance. It’s a weakness that is very well known by perpetrators,” he says.

“But also the equipment that security personnel use must be improved, with working metal detectors, for instance, installation of boom gates at the facilities and a well-coordinated network of a support system for backup whenever the need arises. Most importantly, however, the government must realise that the safety of both employees and patients inside facilities is its responsibility.”

“If properly trained, experienced, and committed personnel are appointed, all these incidents could be prevented,” he says. “There is a need for proper control mechanisms like CCTV cameras, but most are always malfunctioning. There is [a] need for metal detectors, proper searching for guns and knives, among other things.”

He argues that all unnecessary entry points to health facilities should be closed and that proper lighting and alarm systems should be installed. This, he says, must be coupled with regular patrols and panic buttons linked to the local police station.

According to Van der Ross, some of this is already happening.

“There are CCTV cameras at facilities and staff are equipped with mobile panic buttons. The staff are aware of the procedure to follow when their safety and security are compromised,” she says, adding that assistance and response times from enforcement agencies can vary.

Van der Ross says the number of security staff at a facility depends on the size of the facility and the risk profile of the area.

“There are security guards during the day and night. When an incident occurs at a facility, a further assessment is made if additional security measures are required,” she says.

Van der Heever concurs that getting more security depends on the size of the facility, its operational times, the health services provided and the size of the population.

“These security guards are stationed at strategic and high-traffic points at each facility and they are available the entire time the facility is operational. In the event a facility is open 24 hours, then security will work in shifts to ensure continuous security service,” he says.

“It is really more important that our communities realise that a health facility is a place of healing, where people who need medical care go, and should not be used as a place for criminality. We have seen at some facilities where protest happens and property is damaged, [that] it is the patients who suffer the most. Our staff also endure emotional trauma.”

Apart from the direct trauma suffered by healthcare workers and the public, security breaches also have an impact on the availability of healthcare services. Van der Ross says depending on the severity and type of incident, clinics are closed until law enforcement agencies say they can be reopened.

“Any incident is a concern for the department as staff safety is a priority,” she says.

“Continuous improvements are done to safeguard the staff and community, such as engaging with law enforcement agencies and other relevant City of Cape Town departments to discuss challenges, safety concerns, action plans and staff safety strategies [as well as] implementing hard measures inside the clinic to prevent breaches [through] risk assessments by the Safety and Security Directorate for the red zones.”

In red zones, law enforcement officers escort staff to their places of work every day. Staff are also trained in anti-hijacking safety measures. At times, Van der Ross says, facilities are closed if there is unrest in the area or if the area is deemed unsafe because of security breaches. In such cases, psychological support services are offered to all staff affected by these incidents.

Away from the Western Cape’s public healthcare facilities, there are also safety concerns over ambulances going into certain areas.

According to Van der Heever, there were five reported attacks on emergency medical services (EMS) personnel in the first three months of this year and 12 over the same period last year. There were 78 such attacks in 2021.

“Our crews go out every day into the unknown, wanting to save lives and provide healthcare to those in need. If our staff are attacked or exposed to trauma, this undoubtedly leads to their mental wellbeing also suffering. With this happening it means they might need time off from work — meaning there is one less healthcare provider to assist at a health facility or in an ambulance,” he says. DM/MC