Olaf Scholz’s ‘Zeitenwende’ welcomed by Germans and others, but critics say it doesn’t go far enough 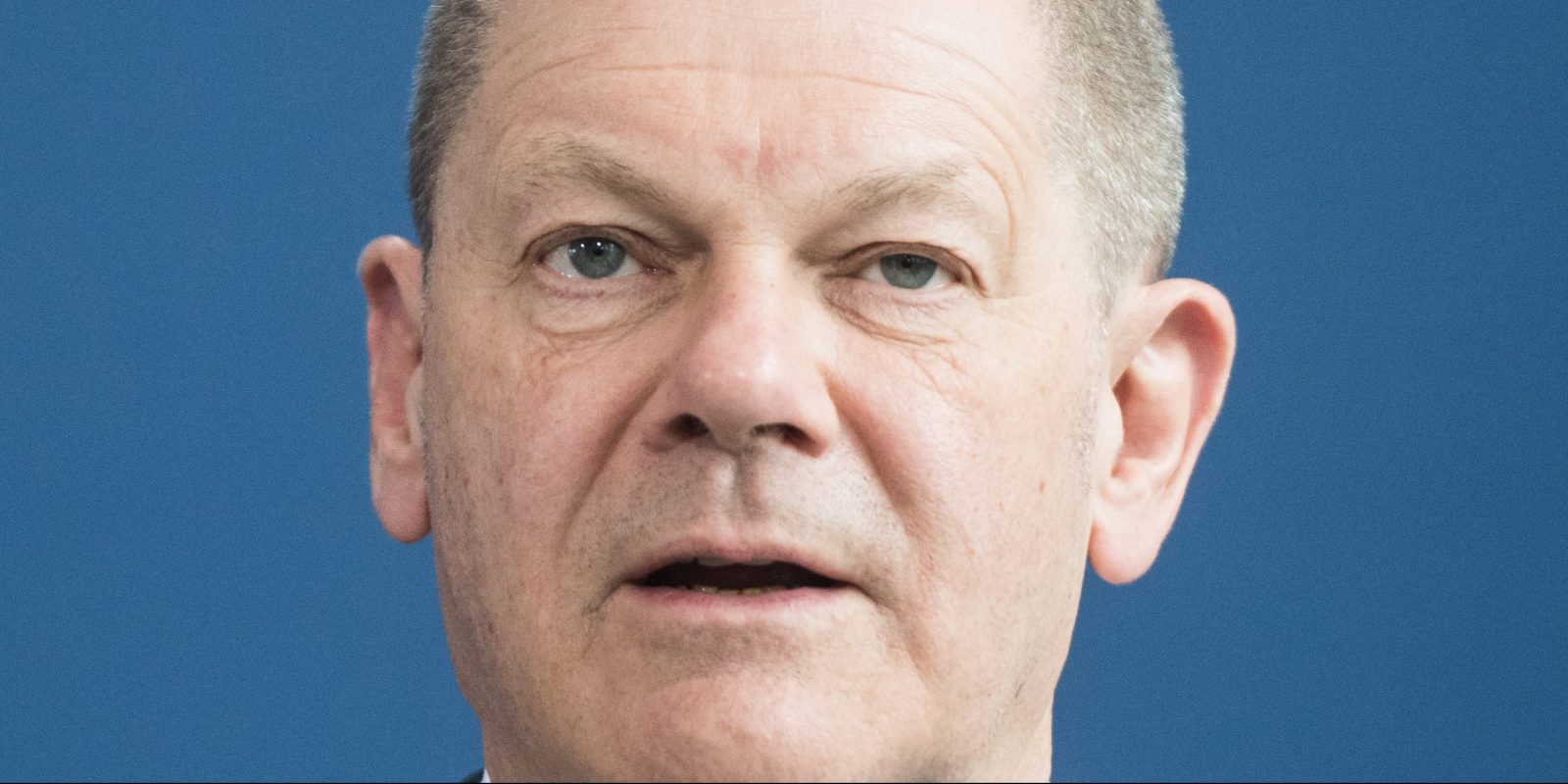 Germany has for years been the pacifist in Europe, the ‘inhibitor’ of tough joint action against Russian aggression. But that is starting to change.

On 27 February, three days after Russia invaded Ukraine, German Chancellor Olaf Scholz addressed an unprecedented emergency Sunday sitting of Germany’s federal parliament, the Bundesrat, in which he laid out a new more aggressive policy towards Russia.

It included the budgeting of an extra €100-billion to replenish the depleted Germany military, on top of its current €50-billion annual budget; a commitment to increase the defence budget to at least the 2% of GDP which all Nato members are supposed to spend; a decision to provide weapons to Ukraine; tough economic sanctions against Russia; a decision to work towards independence from Russian gas and oil; and a commitment to strategic sovereignty of Germany and the EU.

Scholz has decided to halt Germany’s €10-billion Nord Stream 2 gas pipeline project, which would have doubled the flow of Russian gas into Germany. And he has also decided to stop Germany’s coal imports from Russia by autumn and oil imports by the end of 2022.

Scholz’s speech in which he announced a “Zeitenwende” – an epoch change in Germany’s policy towards Russia – was well received by most Germans as well as the country’s neighbours and other allies in Nato. But now they are growing impatient, waiting to see more concrete actions to put real meat on the promising bones of the new policy.

“We’ve heard about Zeitenwende for two months already, but so far we haven’t seen too many concrete actions,” says Dr Weronika Priesmeyer-Tkocz, deputy director of the European Academy Berlin.

Scholz has been heavily criticised by the public for not implementing the Zeitenwende and not even discussing it openly. Foreign minister Annalena Baerbock has been quite active – for example by looking for alternative sources of energy – but Priesmeyer-Tkocz notes that in the German system big decisions like this get pushed up to the chancellor for a decision. “And Scholz has been reticent with words,” Priesmeyer-Tkocz says cautiously, while acknowledging that in Scholz’s three-party governing coalition, making decisions is not always easy.

Yet both coalition partners of Scholz’s SPD party – the FDP and the Greens – have criticised him for failing to take more decisive action, particularly to supply heavy weapons to Ukraine.

They note, as Time magazine has reported, that by the end of March Germany had supplied Ukraine with just €1.2-million in military aid – none of it in heavy weapons – “while tiny Estonia had managed to come up with €2.2-million”. However, Germany notes that it contributed a major share to the European Union’s €1.5-billion military aid package.

Anton Hofreiter of the Greens party, who chairs parliament’s Europe committee, has been the most vocal in demanding more decisive action from his own government. To Scholz’s argument that supplying heavy German arms to Ukraine could provoke World War 3, he says the opposite, that the war will escalate, dragging in more and more countries, if Germany does not supply Ukraine with enough arms to help end it quickly.

The longer the war drags on, the greater the danger “that other countries will be attacked and we will then slide into an extended de facto third world war”, he told ZDF Morgenmagazin.

Hofreiter said Scholz’s argument that the Ukrainians would be unable to operate sophisticated heavy German weapons was patronising.

Something of a scandal erupted on 20 April when the Bild newspaper revealed that the German industry had submitted to the Berlin government in February a list of available weapons but the government had not shown this list to Ukraine until April, and then with many of the original weapons removed.

Priesmeyer-Tkocz notes that Ukraine’s ambassador to Germany, Andriy Melnyk, has also been “very open” in loudly criticising Germany for not doing enough – particularly providing heavy weapons. There has also been criticism from Nato allies such as Poland and the Baltic states.

She also notes that there has also been considerable public pressure on Scholz to do more for Ukraine as the German people strongly support Ukraine’s cause. Polls have shown about 78% back the tougher stance Scholz is taking. Half a million people demonstrated at the Bundestag against the war, and Berlin lit the Brandenburg Gate in blue and yellow to show solidarity with Ukraine.

Priesmeyer-Tkocz says Germans are also feeling increasingly threatened by Russia. The percentage rose from 41% in 2015 to 55% just before the war in Ukraine began, to 74% now. “So, Zeitenwende is having a big impact on society,” she says. And it seems that the German society’s fears of Russia and sympathies to Russia may also, conversely, be impacting Scholz’s Zeitenwende policy.”

Priesmeyer-Tkocz adds that the fact that Ukraine has been fighting Russia and winning and the influx of 381.500 registered Ukrainian refugees into Germany (and 5.5 million in total who have fled their country) – the biggest refugee wave in Europe since World War 2 – have also been game changers in shifting German attitudes to Russia.

She noted there had already been a deal for Berlin to supply Slovenia with German tanks to replace their old Soviet tanks which they will send to Ukraine.

And then only this week there appeared to be a new shift in Germany’s position as the government gave the go-ahead to a German arms company to supply about 50 decommissioned Gepard armoured anti-aircraft vehicles to Ukraine.

Yet analysts are still trying to understand Scholz’s reluctance to take more decisive action. Behind all of this is the rather pacifist policy that has been pursued by all German governments since 1945, a reaction to the aggression of the Nazi regime which plunged Europe and the world into World War 2.

One analyst, who prefers not to be named, says he believes Scholz “does not want to be remembered as the chancellor who took Germany into war with Russia”. Scholz has said openly that he fears that providing heavy weapons to Russia could provoke a world war.

Scholz has also said that he does not want sanctions against Russia to hurt Germany more than Russia. Germany is heavily dependent on Russian energy. In 2021, it got about 50% of its coal, 34% of its oil and 55% of its natural gas from Russia, according to the independent energy think tank Agora Energiewende.

So, even though it decided to stop all Russian coal and oil imports this year, it will not stop gas imports.

Critics have pointed out that these pump about €200-million a day into Russia’s war coffers to fight Ukraine.

Scholz’s critics like Hofreiter are waiting for the next step which would be for Germany to supply its most sophisticated current heavy weapons to Ukraine and to train the Ukrainian military in how to use them.

Germany has long been considered the “inhibitor” in the EU-Nato response to Russia, Priesmeyer-Tkocz observes. The German approach was known as “Wandel durch Handel” – change through trade, a belief that doing business with Russia would be the best way to reform its autocratic system and bring it into the Western ambit.

That attitude is now widely acknowledged by senior German officials as having been naïve, as they also regret the fact that Germany allowed itself to become so dependent on Russian energy.

These include German President Frank-Walter Steinmeier, whom the Ukrainians would not allow to visit their country in early April, along with equivalent officials from other allied states, because they considered him to have been too close to Russia when he was foreign minister.

He acknowledged afterwards that expecting Russia to change its aggressive policies through engaging with the country in trade had been naïve.

But one person who remains unrepentant for pursuing “Wandel durch Handel” is former SPD chancellor Gerhard Schröder who has been making large amounts of money through his positions on the boards of Russian gas companies for several years – and shows no signs of giving up these positions, according to press reports.

He is, however, coming under increasing pressure from the SPD to resign from those positions or resign from the party since he is causing it growing embarrassment, German analysts say. DM168