A good week for SA rugby, on and off the field

Warrick Gelant of the Stormers clears for his team during the United Rugby Championship 2021/22 game between the Stormers and Leinster at Cape Town Stadium on 30 April 2022. The Stormers won the match 20-13. (Photo: Ryan Wilkisky / BackpagePix)

It’s been a good week for South African rugby on and off the field after three SA teams qualified for the play-offs of the United Rugby Championship and the union declared a small profit.

The Sharks, Stormers and Bulls have secured places in the United Rugby Championship (URC) play-offs, and more significantly, qualified for next season’s prestigious European Champions Cup.

It’s the best possible outcome for South African rugby and has, in a short timeframe, vindicated the SA Rugby Union’s (Saru’s) decision to move north when Super Rugby collapsed during the height of the Covid pandemic.

Saru chief executive Jurie Roux played a visionary role in pushing for a move towards the Northern Hemisphere and in turn the teams have delivered strong performances on the field.

When Super Rugby collapsed in mid-2020 due to Covid, Saru acted quickly in positioning South Africa’s leading teams for a move north.

While entry into the PRO14 (as it was known before becoming the URC) was likely, the real key for South Africa’s teams was a guarantee that they would be able to qualify for the European Champions Cup on the merits of their performances in the URC. That is the richest club competition in the world and in rugby terms rivals football’s Champions League for prestige.

Once that hurdle was overcome, it was down to the teams to prove their worth. And despite a difficult season with Covid-enforced postponements, the URC has somehow reached the business end with all fixtures honoured and three South African teams in the top six.

The Sharks are third on the standings with 56 points from 17 games, with the Stormers fourth, also on 56 points. The Bulls are sixth on 53 points and with one round of fixtures to complete before the play-offs it’s now about establishing final log positions for home-ground advantage.

The top four teams of each pool (Ireland, South Africa, Wales and Scotland/Italy) plus the four next-best teams, qualify for the European Champions Cup. None of the three South African teams mentioned can finish outside of qualifying positions now.

But while recent results have been heartening, there is a long way to go for SA’s best to topple Leinster, the URC version of the Super Rugby’s Crusaders.

The Irish club toured SA with an under-strength team that included eight academy players, basically semi-professionals, and took the Stormers to the wire, with the home side eventually winning 20-13 at Cape Town Stadium last Saturday.

Leinster have already secured the top of the standings and could afford to rest key players for the tour.

“Toby Booth of the Ospreys told me after the game here, he said that the best team in the competition is Leinster and the second-best team is Leinster B. He wasn’t joking; they were good,” Stormers coach John Dobson said after the win.

“It did feel a bit anticlimactic. Some of the errors we made, whether that was discipline or at the lineout, we could have got the fourth try. I’m not disappointed with the performance or effort. We knew we were going to be in for a hard game.

“Another factor is our own standards. It’s quite a good reflection on this group that has just played Leinster and feeling like we are walking in after a loss.”

Stability off the field despite Roux issue

While the teams are performing on the field, off it, Saru is in a healthy position compared with this time a year ago thanks to crowds returning, competitions being played and strong leadership during the pandemic.

But Roux has his own issues that will almost certainly end his tenure as Saru CEO in due course. He lost an arbitration case against Stellenbosch University late last year, relating to his time at Maties between 2002 and 2010.

Roux was found guilty of a misallocation of funds relating to his tenure in the finance department of the rugby club. He was ordered to pay back R37-million and to pay the university’s legal costs.

Roux is still contesting the order and his case has been moved to the Western Cape High Court, where it will be heard on 19 October.

The arbitration award to Maties over Roux was damning and a blow to Saru because of Roux’s stellar leadership during his 10 years at the mother body.

For Saru, the question is not so much about Roux’s performance as CEO, which by any objective measurement has been a success, but about the potential reputational and perception damage to Saru over his continued employment in the light of the Maties case outcome.

Daily Maverick understands that Roux has the support of the bulk of the General Council and all of the Exco as well as key Saru sponsors. But there is no way of avoiding the awkward reality that Roux’s case is a distraction and also a perception battle for rugby.

But Saru appears to have taken the approach of supporting Roux until all legal avenues are exhausted.

While there are understandable and necessary questions to be answered over Roux’s past at Maties, it’s clear that under his leadership Saru has navigated two years of Covid-ravaged seasons as well as could be expected.

After posting lower than anticipated losses during 2020 (R7.9-million), thanks largely to an industry mitigation programme to slash budgets by about R1-billion, Saru returned an R8.9-million surplus in 2021.

It’s a remarkable outcome considering 2021 was still hugely affected by the pandemic and the vital British & Irish Lions tour went ahead without fans.

The annual financial statements were approved at the Saru annual general meeting in Cape Town on 29 April, at which incumbent president Mark Alexander was re-elected for a further four-year term. 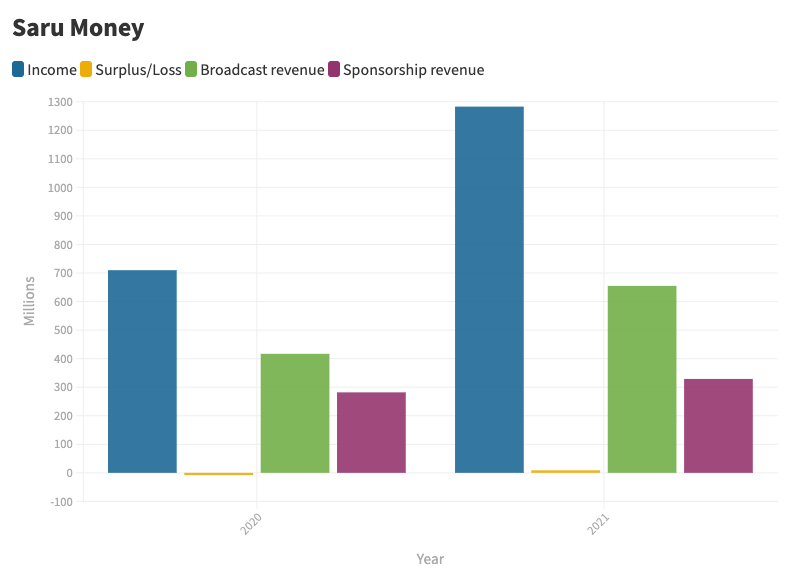 All South African national teams, apart from the Springbok Women’s Sevens and SA Schools sides, resumed play during the 2021 season after the wipe-out of the previous 12 months.

The Springboks, Springbok Women and age-group teams were completely inactive in 2020 and the Springbok Sevens team appeared only four times before the pandemic hit.

That increase in activity generated a recovery in broadcast and sponsorship revenues. Broadcast income increased from R417-million in 2020 to R655-million, while the net income from the Lions series (R107-million) when added to existing sponsorship contracts (R222-million) saw sponsorship income rise to R329-million (R282-million in 2021).

The return to rugby activity had a consequent impact on expenses, with rugby costs increasing by R107-million to R280-million, commercial costs by R52-million to R292-million and image rights and insurance costs by R18-million to R73-million. The improving environment allowed distributions to member unions to increase from R187-million to R244-million.

“The fact that the [Lions] tour happened is a rugby miracle,” Alexander said in his annual report. “Recognition for this must go to the hard work put in by Jurie Roux, SA Rugby’s CEO, and Rian Oberholzer, SA Rugby’s tour consultant, together with their respective teams.

“The Springbok series win can be credited to Rassie Erasmus, Jacques Nienaber, management and captain Siya Kolisi and his brave warriors.

“I do regret that none of the Lions’ eight matches were experienced by capacity crowds. The Covid pandemic health regulations did not allow for any crowds, but it remains a great SA Rugby triumph that the tour even took place.”

The better financial news came with a warning from Roux, though.

“The return to play of the Springboks and the delivery of the Lions Series were critical to the survival of the sport in 2021,” Roux said. “Had we not been able to deliver those events we would have been closing rugby’s doors by year-end.

“The absence of live spectators made it impossible to realise the commercial result that had been hoped for. It also meant that sponsorship agreements had to be modified, but retaining broadcast and some sponsorship revenues was critical to SA Rugby’s survival.

“Having said that, the fact that the pandemic prevented the attendance of supporters at Springbok Tests and at provincial matches means the sport remains in a precarious position.

“Last year [2021] was supposed to be the year that we built up reserves from the windfall of a British & Irish Lions tour; Covid-19 denied us that opportunity. The tour meant we were able to break even, but if we are hit by an event of a similar magnitude, we have zero reserves to weather it.” DM