My message for Boris Becker: We will wait for you on th...

Boris Becker, we will wait for you on the other side, and wish you redemption and forgiveness 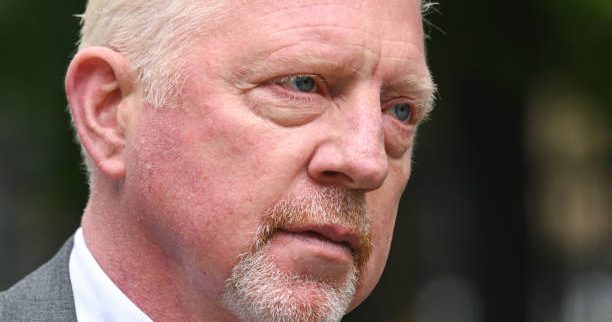 Boris Becker appears at Southwark Crown Court on 29 April 2022 in London, England. The six-time Grand Slam tennis champion was sentenced after being found guilty of four charges under the Insolvency Act relating to his bankruptcy in 2017. (Photo: Karwai Tang / WireImage)

I can’t give Boris Becker any advice on what prison life is like. I can only imagine how grim indeed he must be feeling. I am penning him this note in the hope that he might read it and think about life after Wandsworth Prison in South London.

I know Boris Becker. For the best part of 15 years, I have covered ç as a journalist. But before that moment arrived, my first chance to visit Wimbledon came via a ticket from him. We met through my friend, the legendary boxer Chris Eubank. We drank Champagne at The Dorchester London hotel and, although the mood was jolly, my overriding memory was of a deeply troubled look deep into Becker’s eyes.

In reality, he was living a Champagne lifestyle to keep up appearances. His financial woes started a long time ago. I wasn’t at all surprised when the walls of Jericho came tumbling down. In the most recent of years, I have seen Boris less and less. He internalised his problems and only phoned intermittently. He never said a lot, but usually ended up making me laugh out loud.

I had seen something like this before with my long-term friend Chris Eubank. Eubank (who hardly drinks) fell into bankruptcy too. In those days, I was living in a one-bedroom apartment in Westminster. Chris would often ask to stay the night because he didn’t have anywhere else to sleep. I had to draw the line at sleeping in the same bed though. It was the sofa or nothing, I had to explain.

Bankruptcy can come to anyone. Usually, it’s bad financial planning or a bad investment decision that brings this about. It is also a statistical fact that most who make their own money also end up blowing it all in their own lifetime.

When the one-time Conservative MP-turned-novelist Jeffrey Archer went bankrupt that was because of a bad investment decision. Back in the 1970s, he thought he was destined to be prime minister, but nobody told him that back in those days that only gentlemen became prime minister, and he has since made another fortune by writing books. But back to Becker.

Boris Becker has probably not slept a wink since the prison cell doors closed on his back on Friday and the warden shouted “lights out”. The lights have gone out for Becker for now – this will be the first Wimbledon in 25 years when we won’t be listening to his wisdom – at the greatest Grand Slam of the year. But I hope he can take comfort in the knowledge that many people make it back from bankruptcy and imprisonment. I don’t excuse his stupidity in breaking the law, but I am compassionate enough to understand why he acted in the way he did.

I studied Theology at Peterhouse, at the University of Cambridge. Redemption and forgiveness are strong narratives in my discipline. Increasingly, however, and especially for those in public life, this never seems to apply. Why not? We seem increasingly pleased by humiliation and punishment. The bigger the celebrity name, the more we enjoy it.

I can’t give Boris Becker any advice on what prison life is like. I can only imagine how grim indeed he must be feeling. I am penning him this note in the hope that he might read it and think about life after Wandsworth Prison in South London. I recommend that he read Jeffrey Archer’s prison diaries. It is light relief – it’s a kind of introductory guide to prison – but for a more fundamental inner look at self, I can do no better than to suggest he turn to the Reverend Jonathan Aitken. He was a British Cabinet minister under John Major as prime minister. He was found guilty of perjury in 1999. The details don’t matter now, suffice to say, Jonathan has since turned his life around and is a prison visitor and a parish priest. His book is worth reading again and again. How to fall like Lucifer comes to mind.

Read in Daily Maverick: On forgiveness

Boris, your many friends are wishing you forgiveness. We are wishing you strength but, above all, we are hoping you will turn your life around and when you are out, do public good. Lots of public good. You have one of the best senses of humour of anyone I know. I just hope it will help you pull through. I know you can do it and we will all be waiting for you on the other side.