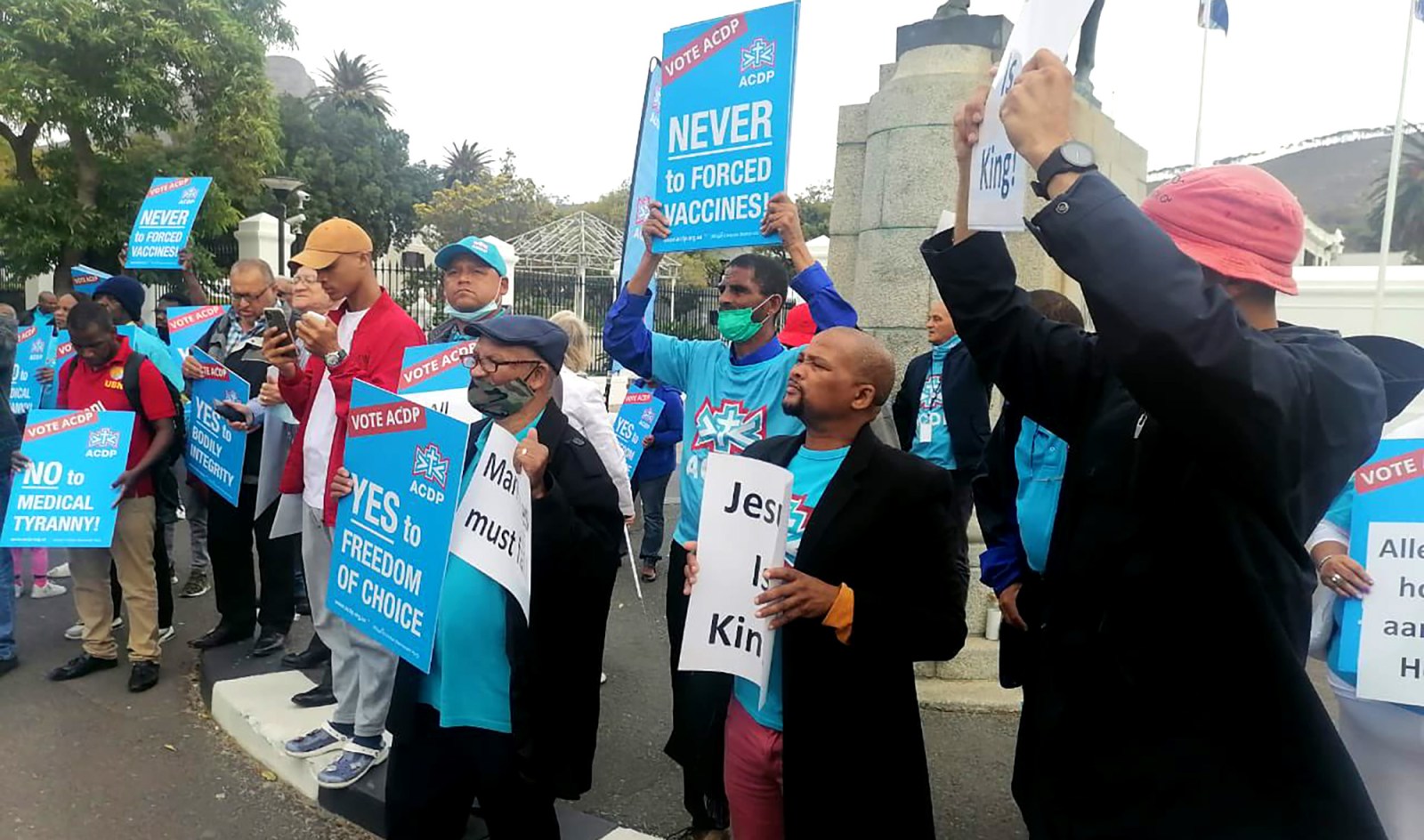 The African Christian Democratic Party and partners are in the high court on Thursday and Friday, seeking to stop the roll-out of Covid-19 vaccines to adolescents. But, given that most pupils attend schools with infrastructure problems and serious overcrowding, vaccines remain critical to keep them safe and prevent outbreaks at schools.

More than 1.6 million people between the ages of 12 and 17 in South Africa have been vaccinated against Covid-19 since the roll-out opened up to teenagers in late 2021. Continued roll-out has contributed to the growing sense of “returning to normal”, with the National State of Disaster lifted on 4 April 2022 and schools reopening fully on 7 February 2022.

Despite the well-documented benefits to and safety of vaccines for adolescents, the African Christian Democratic Party (ACDP) and its partners – Free the Children, Save the Nation NPC, the Caring Healthcare Workers Coalition and the Covid Care Alliance – are seeking to stop the roll-out of Covid-19 vaccines for adolescents urgently. But in a context where the majority of pupils attend schools with infrastructure problems and serious overcrowding, vaccines remain a critical tool to keep them safe and prevent outbreaks of infection at schools.

The case and its shortcomings

On Thursday, 28 April and Friday, 29 April 2022, the High Court of South Africa (Gauteng Division, Pretoria) will hear a case brought by the ACDP and its partners against the Department of Health and the South African Health Products Regulatory Authority (Sahpra), who are opposing the application.

One of the major oversights of the ACDP’s case is that it has failed to recognise the impact of Covid-19 on schooling, and how vaccines act as a crucial tool to protect pupils from the worst impacts of a virus that has already wreaked havoc on their lives and educational outcomes for more than two years.

Arguing that the vaccine against Covid-19 threatens children’s best interests and the right to bodily integrity, the ACDP and its partners are trying to interdict health authorities from vaccinating adolescents. Covid-19 vaccines, they argue, carry more risks than benefits to adolescents, who, they claim, are not affected by the virus in serious ways. Citing refuted evidence about the risks of myocarditis and neurological side-effects allegedly associated with vaccines from discredited doctors in the US and the UK, the ACDP claims that teenagers’ lives and rights are under threat from continuing the roll-out of vaccines.

When interrogated in light of the latest scientific evidence and a children’s rights-based approach, these arguments do not hold up.

SECTION27 has intervened as amicus curiae (friend of the court) in the case to introduce evidence on the detrimental impacts of school closures on pupils’ wellbeing, with evidence from Professor Tom Moultrie, a professor of demography and director of the Centre for Actuarial Research at the University of Cape Town, Dr Sara Black, an academic at the Centre for Education Rights and Transformation at the University of Johannesburg, and Dr Shaheda Omar, the clinical director of the Teddy Bear Clinic for Abused Children. SECTION27’s submissions raise a basic education-focused, rights-based approach, arguing that an interdict to the vaccine roll-out would infringe a pupil’s right to equality, basic education, health and basic nutrition.

The claim that children are not affected by Covid-19, as the ACDP and its partners do in their papers, is not borne out by the facts. While the majority of serious cases, hospital admissions and deaths from Covid-19 have been among older age groups and people with unmanaged comorbidities, the virus has affected children clinically.

The latest National Institute for Communicable Diseases (NICD) Covid-19 Hospital Surveillance Update shows that since March 2020, more than 15,500 children between the ages of 10 and 19 have been admitted to hospitals around the country with Covid-19, and over the same period, 412 children in the same age group tragically died in hospital from Covid-19.

The risks associated with vaccination, the national health authorities have shown in their papers, are much smaller and more manageable compared with adolescents getting sick from the virus itself.

Over and above the very real clinical risks Covid-19 poses to children, the virus has also disrupted their ability to attend school and socialise, and has resulted in widespread detrimental educational and mental health outcomes for young people. Learning has been heavily disrupted, with pupils’ well behind previous cohorts’ levels of literacy and numeracy, despite efforts to trim and catch up the curriculum.

Schools are important social safety nets for children, with nine million receiving daily meals at school through the National School Nutrition Programme, as well as other important social support. In addition, schools are crucial to their psychological and developmental wellbeing.

As such, when schools closed or adopted rotational timetables to try to curb the Covid-19 spread in schools, pupils were hit hard. And the hardest hit were those from socioeconomically disadvantaged areas, where many schools are overcrowded and have infrastructure challenges that make it more difficult to prevent an outbreak.

As we go into winter, scientists predict a high probability of another wave of Covid-19 infections (testing numbers over the past week suggest that such a wave may already be starting). In the event that another substantial wave does develop and the country is forced into future lockdowns or school closures, the access to nutrition via the School Nutrition Programme is likely to be disrupted and children could go hungry.

SECTION27 introduced evidence from Professor Shabir Madhi, dean of the Faculty of Health Sciences at the University of the Witwatersrand, who supports the roll-out of vaccines on the basis that it could prevent future disruptions to schooling. In his affidavit, Madhi states:

“Despite the widespread force of past infection, the vaccination of children aged between 12 and 18 would still be beneficial in reducing the risk of children being infected, and passing on the virus, both to each other and to adults… This is particularly important in the school environment, where every attempt should be made to avoid large clusters of cases that could precipitate further disruptions of schooling. A key way to mitigate that risk would be by ensuring that the majority of children are indeed vaccinated against Covid. In my opinion, this would strongly advance the best interests of children.”

Poor pupils who attend underresourced and overcrowded public schools stand to lose the most in a scenario where vaccination is interdicted. The already highly unequal basic education system in South Africa could become even more uneven.

The ACDP’s campaign to derail vaccinations for adolescents comes amid persistent vaccine hesitancy. Widely representative surveys imply that many people would like to get vaccinated but haven’t done so yet. Barriers to accessing vaccines, such as transport costs and vaccine site opening hours which do not accommodate people who work or attend school, remain major obstacles to people getting the vaccines they have a right to.

Many teenagers, specifically pupils, would like to get vaccinated but face very difficult challenges accessing vaccine sites. An interdict like the one sought by the ACDP would make it even more difficult for them.

Recent surveys of unvaccinated people indicate that mistrust of the government’s messaging about Covid-19 vaccines is an important factor driving vaccine hesitancy. In this context, the ACDP’s case – and its concurrent campaign on social media – does more than just propose an interdict on vaccine roll-out for teenagers; it contributes to increased mistrust of government messaging about vaccines and may cloud public perception around vaccination.

In this context, where mistrust is high, and myths and misinformation about vaccines abound, it’s important to reiterate the facts: vaccines are safe and effective at preventing severe cases and hospital admissions from Covid-19, for both adults and teenagers.

Overcrowding in many classrooms is another fact that cannot be understated and, in the context of widespread infrastructure challenges at schools, vaccines are a crucial tool that can be used – alongside other non-pharmaceutical interventions such as ventilation and mask wearing – to protect children in South Africa’s most disadvantaged schools.

From a children’s rights perspective, continuing vaccination against Covid-19 is a constitutional imperative. DM/MC

* Chaskalson is a research and advocacy officer at SECTION27. Sujee is an attorney in the education rights programme at SECTION27.