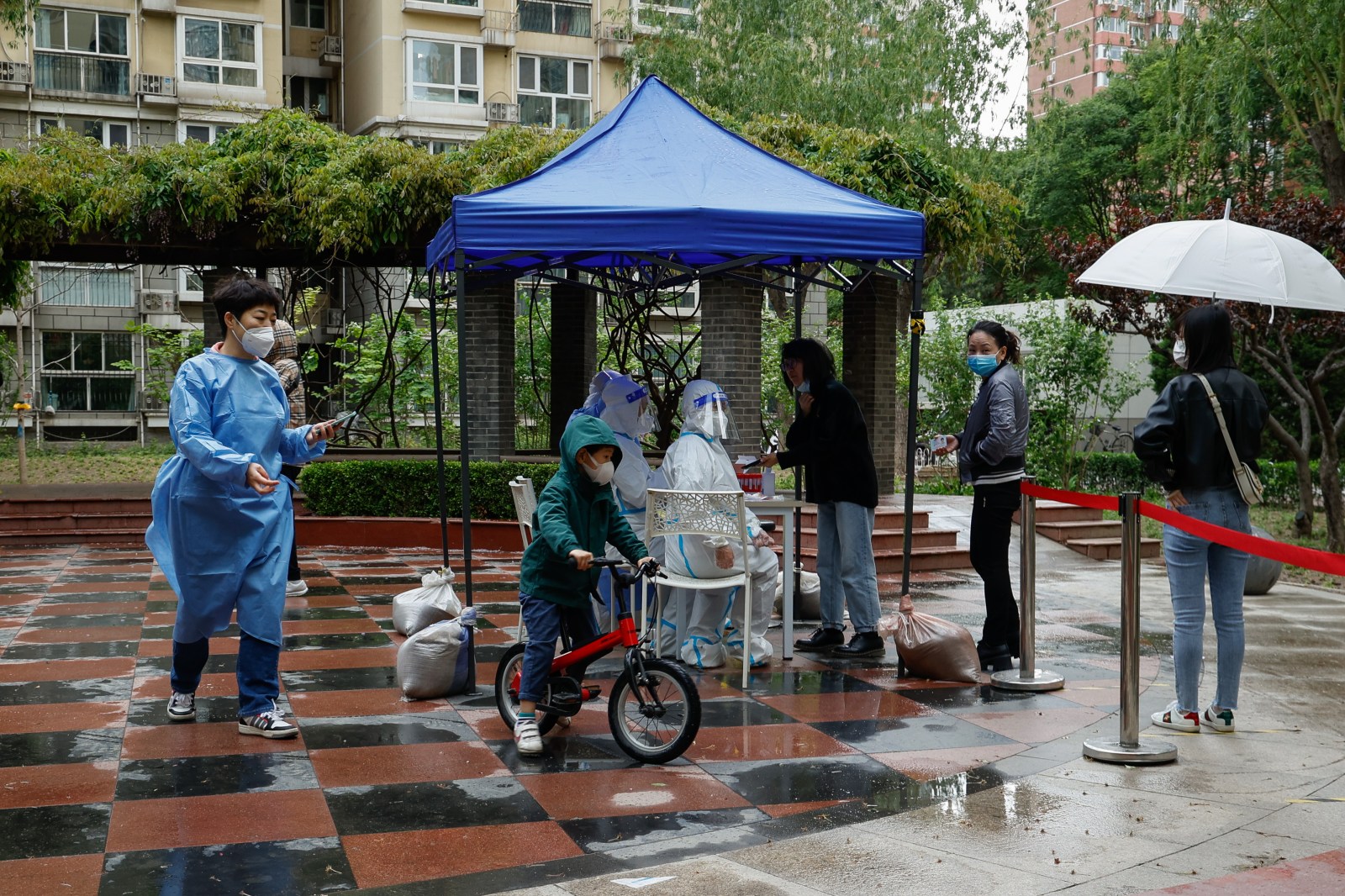 A health worker (L) chases a child riding a bicycle at a COVID-19 test in a residential area in Beijing, China, 27 April 2022. Beijing continues its mass testing in 11 districts to over 20 million residents as the city recorded 34 COVID-19 cases, its highest since the Omicron variant was recorded on 22 April. EPA-EFE/MARK R. CRISTINO

BEIJING/SHANGHAI, April 28 (Reuters) - Beijing closed some schools and public spaces on Thursday, as most of the Chinese capital's 22 million residents turned up for more mass Covid-19 testing aimed at averting a Shanghai-like lockdown.

Most people in Shanghai were one month into stressful home isolation, struggling to meet basic needs. But there was hope on the horizon as the number of new cases declined further and officials said their focus was shifting towards boosting vaccinations among the elderly.

Fears were growing, however, that China would be trapped in a whack-a-mole game in coming months, lifting lockdowns in some places, while imposing others elsewhere, causing severe economic damage and exasperating its population.

As Beijing rolled out three rounds of mass testing this week across most of the city, it locked down a number of residential compounds, offices and a university.

Some schools, entertainment venues and tourist sites were also shut. Universal Studios in Beijing said it would require visitors from Friday to show negative test results before they could enter the theme park.

Andrew Ward, 36, a Canadian living in one of Beijing’s narrow lanes of courtyard houses known as hutongs, was sent to quarantine in a hotel on Thursday even though his test results were negative.

On Wednesday, people in hazmat suits tested Ward at home after he was identified as a close contact of a Covid-19 case.

“I’m a little bit annoyed, because I spent all that money and time stockpiling food for being locked down at home,” said Ward, who works at an international school.

The city’s overall tally in the current outbreak has risen to 194, nearly half of which were detected in Chaoyang, its most populous district known for its night life, malls and embassies.

China’s zero Covid-19 tolerance policy has provoked rare public anger in an important year for President Xi Jinping, over measures that seem surreal to much of the outside world that has chosen to live with the virus, even as infections spread.

Xi is widely expected to secure a third leadership term this fall and authorities would like to avoid a repeat in the capital of the scenes in Shanghai, where some residents leaned out their windows to beat pots and pans in anger as people in protective suits installed fences around their homes.

Chinese officials have repeatedly said heavy-handed Covid-19 curbs, including prolonged lockdowns, are needed to save as many lives as possible and prevent the health system from being overwhelmed.

In democratically-ruled Taiwan, which Beijing claims as its own, authorities are gradually easing curbs even as daily Covid-19 cases topped 10,000 for the first time. Only seven people there have died of Covid-19 this year.

China’s yuan slipped to 18-month lows against the U.S. dollar CNY=PBOC on Thursday as Covid-19 outbreaks and lockdowns threatened this year’s economic growth target of about 5.5%.

Millions of white- and blue-collar workers whose livelihoods depend on mobility between cities have faced severe travel restrictions in recent weeks and the movement of goods has suffered as well.

A transport ministry official estimated passenger traffic for the April 30-May 4 Labour Day break would drop 62% from last year.

A lockdown in Beijing, which has little manufacturing and where many workers can do their jobs from home, would not be as economically damaging. Nevertheless, the capital was in a race against time to avoid Shanghai’s mishaps.

New infections in Shanghai were under 100 a day at the start of March before surging to the thousands by the end of the month in China’s biggest ever outbreak, prompting a citywide lockdown and upending the lives of its 25 million residents.

Most people in the commercial hub remain confined to their homes, but authorities were switching focus on post-lockdown measures, including setting up temporary vaccination stations in care homes and preparing community vaccination vehicles.

“On the condition that epidemic risks are controlled, and with the elderly as the focal point, we are actively promoting Covid-19 vaccinations,” said Zhao Dandan, the deputy director of the municipal health commission.

By Eduardo Baptista and David Stanway