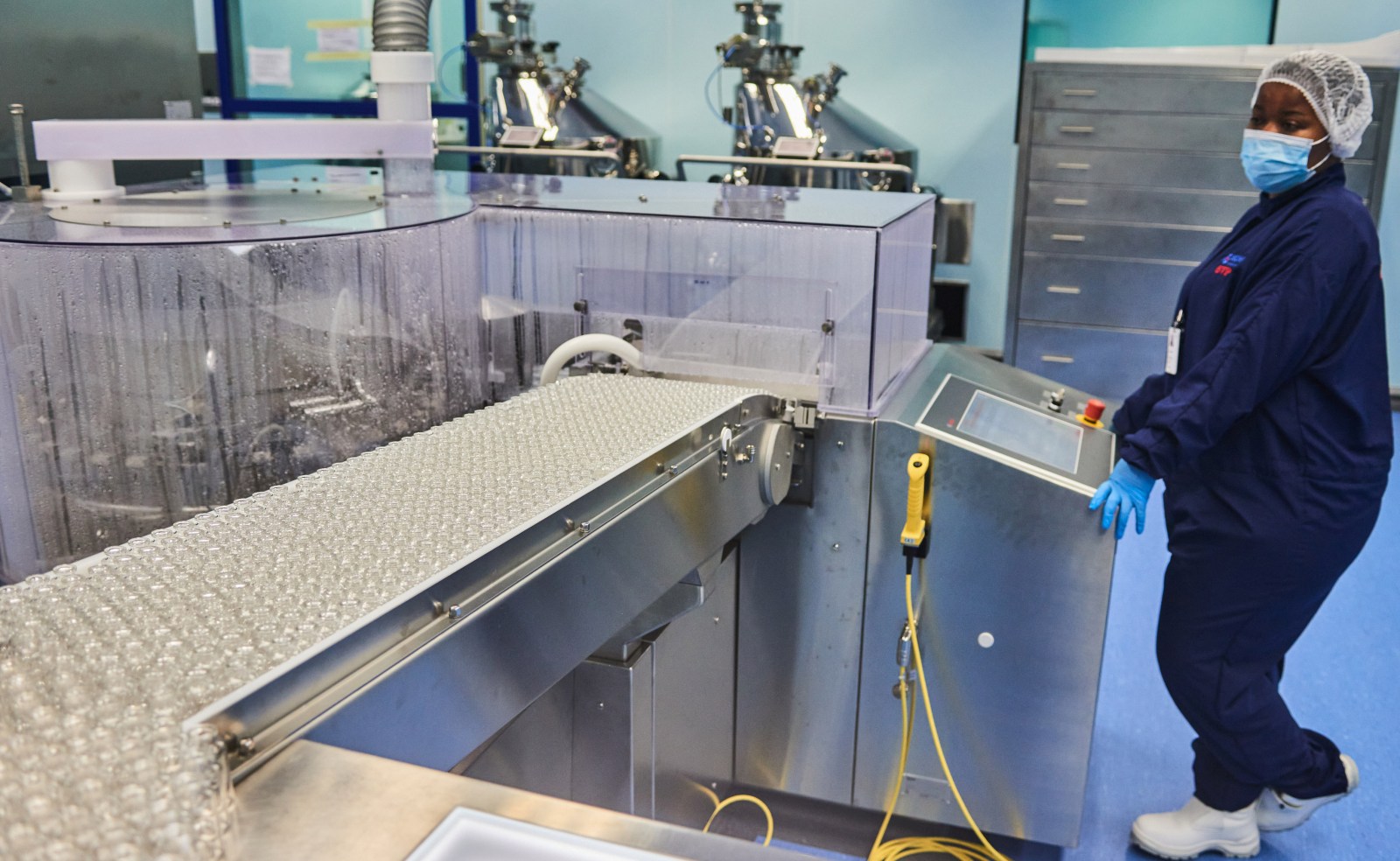 Vials on a production line at Aspen Pharmacare in Gqeberha on 25 October 2021. The Covid-19 pandemic highlighted the need for South Africa to build research and development capacity locally, according to Kelly Chibale, founder and director of the H3D Centre. (Photo: Waldo Swiegers / Bloomberg via Getty Images)

The world needs new antibiotics, and a new Johnson & Johnson venture with the University of Cape Town, launched on Monday, aims to solve the problem by plugging an innovation gap in drug development.

The new Johnson & Johnson (J&J) Satellite Center for Global Health Discovery at the University of Cape Town’s Holistic Drug Discovery and Development (H3D) Centre is the first of its kind in Africa. Launched on Monday, 25 April, the centre is intended to advance discovery research and development in South Africa, particularly the early-stage science needed to address antimicrobial resistance.

The Covid-19 pandemic highlighted the need for South Africa to build research and development capacity locally, according to Kelly Chibale, founder and director of the H3D Centre. This means going beyond surveillance and sequencing to innovation in the discovery of drugs and vaccines.

“It’s a no-brainer that… we build capabilities in discovery and development in close proximity to where the patient is; it is critical because we know that… there is a relationship between the genetics of a population, the socioeconomic environment and the physical environment in which patients live, and effective treatment outcomes,” said Chibale at the launch.

“Doing the discovery in close proximity to the African patient is really, really critical. And it is not just what we do here, it’s also providing knowledge which the innovative pharma companies will benefit from in their… global mission to serve patients across the world.”

There are a number of J&J Centers for Global Health Discovery across the world, forming a global network of research collaborations between J&J and leading research institutions, according to the launch invitation.

The J&J partnership with H3D, as with any other satellite centre, aims to fill an innovation gap in drug development by bringing in effective world-class institutions and scientific thought leaders, according to Anil Koul, vice-president for global public health discovery research at J&J. This in turn shapes the global public health agenda.

Working with J&J will allow H3D to take new drugs beyond the candidate stage to completion and distribution, said Susan Winks, head of research operations and business development at H3D. Such partnerships are particularly important in Africa, where resources are often limited.

“[The centre is] important to South Africa for the… reason that the devastation we see in Africa is not a consequence of a single disease. It’s a consequence of the combined effect of multiple diseases that not only affect humans, but crops and animals that are interacting with each other and interact with the environment, and collectively produce a spiral of socioeconomic and environmental decline,” said Chibale.

In 2019, almost five million people died of a drug-resistant infection, according to Marc Mendelson, professor of infectious diseases and head of the Division of Infectious Diseases and HIV Medicine at Groote Schuur Hospital. Antimicrobial resistance, particularly antibiotic resistance, is affecting human health and the ability to deliver universal health coverage. There is an urgent need for new antibiotics for certain infections.

“One of the important things is, we’ve been struggling with TB [tuberculosis] in South Africa, and with MDR, XDR [multidrug-resistant, extensively drug-resistant] TB, also drug-resistant HIV, and it’s becoming then also your hospital-acquired infections [that are] becoming more the norm,” explained Glaudina Loots, director of health innovation at the Department of Science and Technology.

Addressing antimicrobial resistance is foundational to the global health agenda, according to Chibale. The threat is not restricted to poor and marginalised populations, but can affect anybody who takes antibiotics.

Read in Daily Maverick: “Tackle the ‘silent pandemic’ of antibiotic resistance like the Covid-19 pandemic — but do better, say global health experts”

“As we’ve seen with Covid, anything that’s of global significance requires global efforts, and all the stakeholders represented to engage and participate in finding solutions,” said Chibale. “So, for the academic community… it is really about getting involved in the entire [antimicrobial resistance] value chain, from the fundamental basic science to the translation aspects.”

Winks described the collaboration between J&J and the H3D Centre as a “true partnership” with equality in decision-making and scientific governance. Scientists from both organisations will work together, using shared resources and capabilities to tackle antimicrobial resistance.

A key aim is the development of new antibiotics, said Dr Martin Fitchet, head of global public health at J&J. This would be the “measure of success” for the collaboration.

“For the next three to six months, what we’re going to focus on is coming up with some novel chemical matter, some novel targets to pursue. We’re going to take a two-pronged approach for that. One is to investigate some very novel screening techniques… and then also really zero in on a target to do some structure-based drug design,” said Paul Jackson, scientific director for global public health research and development at J&J.

The knowledge generated at the centre will be shared with other groups and labs, thus enabling the entire antimicrobial resistance field to move forward, explained Jackson. Moreover, the centre would enable the bringing together of senior scientists at J&J and less-experienced individuals at H3D.

“What we really want to do is help train the next generation of scientists in Africa, and this will allow us to expand the talent pool working on [antimicrobial resistance] in the region and also ensure that there’s a pipeline of scientists and it grows and grows in the future,” he continued. “So, in the future, when there are new pandemics, we’ll already have the talent pool in place and this will create more opportunities for scientists in Africa and also more opportunities for employment.”

Chibale expressed a desire to see the ecosystem of which the centre forms a part expand across the African continent, creating jobs and talent in different regions.

“Something I’m really hoping for is that this will be a model for us to create an absorptive capacity to attract talent, to nurture that talent… to develop it and return it, so that we can keep the talent on this continent,” he said. “I see this as a mechanism to use science for development to create jobs.” DM/MC