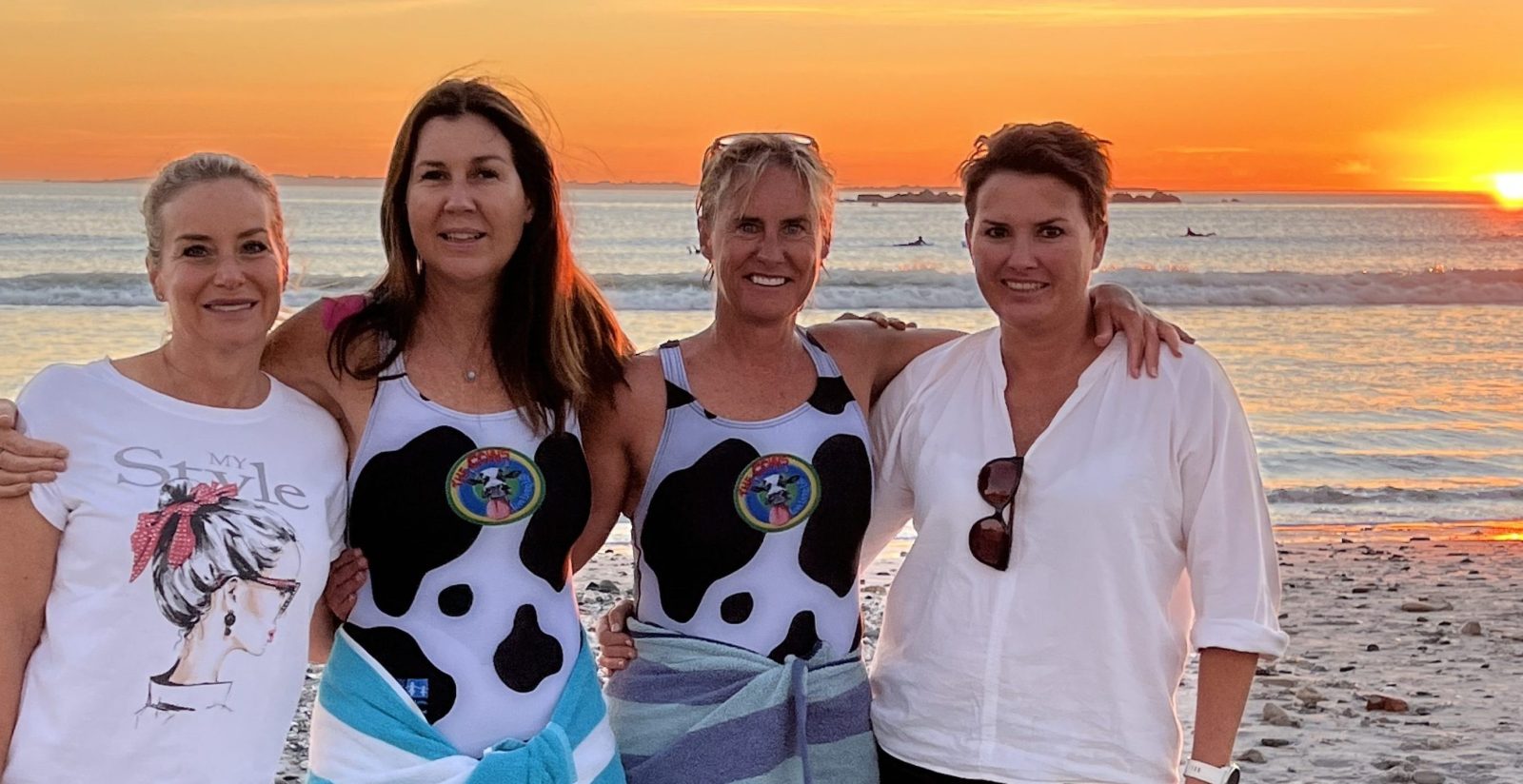 Joining a local swim squad started as a random decision that eventually led to four women swimming Robben Island — and making firm friends for life in the process.

The four women all took the separate decision to join a local swim squad at the Wahoo Aquatic Centre under coach Cyndi Starr, of One Life Swim It, and very quickly formed a like-minded group — all mothers of teenagers, keen to get into shape and share a chat, a coffee, a laugh, a cry, and care.

Karen Jankelow (51), Sue Rider (50), Michelle Blaauw (52) and Gráinne Formby (51) were also swimming for the CHOC Childhood Cancer Foundation, and have to date raised more than R20,000.

Getting ready for the swim

Although the four were at very different stages in terms of swimming fitness and ability, the group supported and motivated one another through all the ups and downs of training for a global drawcard extreme swim, such as Robben Island, as well as through busy family lives, including demanding teenage sports schedules.

And all the while Robben Island hung over their heads like the proverbial sword of Damocles, says Formby.

“We had visions of sharks and jellyfish paying us a visit as we traverse this stretch of water. Tangible demons and non-tangible demons will toy with our minds. Self-doubt will creep in. Positivity and confidence must be my armour. There is purpose in everything, but something to provide additional purpose and drive will be the fact that we will be motivated by the determination and resilience of children and their families facing cancer.”

She describes her state of mind before the swim.

“I am petrified and know that there is a chance that I may not make it. I will face adversity in many forms and have to overcome them, it will be a long slow swim for me. Whatever the outcome there will be no regrets, the journey thus far has been tremendous and hopefully, we’ll have a bucket full of money to hand over to this special charity with the hugest heart.”

Blaauw, an ex-stockbroker and portfolio manager, says part of her goal was to instil in her two teenage daughters the notion of personal goal-setting and achievement, particularly highlighting the strength of women.

“Women have had to learn to multi-task and balance the juggling act of motherhood versus employment versus being the ‘perfect’ wife on a far greater scale than the expectations placed on men. The unnoticed efforts undertaken by women often lead to strong undercurrents of quiet resilience that ultimately often come out in the form of these such endeavours to prove the strength of mind and achievement for both self-worth as well as ‘proving a point.’”

The actual idea, though, to swim back from Robben Island, took seed when their coach Starr did the swim last year. Starr herself has Ankylosing Spondylitis — an inflammatory auto-immune disease — and an arrhythmic heart condition. Her swim inspired the four mums, and the seed germinated into a fully-fledged training schedule.

Rider says that having just turned 50, she was at a stage in her life where she needed to prioritise herself for once.

“I needed something that was mine. Not my three boys’, not my husband’s, not my friends’ goal. So I set myself the goal of swimming Robben Island at the end of last year. December came around and I succumbed to Covid. When January came around I had to put on my big-girl panties and up my training. Thankfully I had managed to rope in Karen, who has become a very close friend. I have no doubt we will remain friends forever and take on new challenges along the way.”

But the next few months were not easy, Rider says. “We had good weeks and bad weeks and most weekends involved us trying to do some distance swimming in the dams. We also endured some ice baths together, but not as many as we had hoped for! Along the way, other mums decided to join in, and we felt honoured that we had inspired other mums to get off the couch and join us,” she says.

Coach Starr says that she is super proud of her supermums.

“This is their biggest achievement in swimming. Grainne only swam open water for the first time ever in February. We live in Joburg, so it’s difficult to find cold-water pools and dams up here. Their journey has been a rollercoaster. So inspiring.”

Jankelow says that she had some initial experience of what was to come, as one of her daughters, Ariella, who is hearing impaired, had done the swim twice last year. This time it was her turn, and her other daughter Talia was on the boat while she swam.

“Every time I breathed to face the boat, I saw Talia. I really found her presence comforting and reassuring. It was amazing to have her encouraging me, passing my feeds. She set up a video call with my husband and Ariella on video and they were able to motivate me.”

As anyone who has ever swum Robben Island knows, your swim plan lasts right up until you get in the water!  Jankelow says her swim plan went smoothly until Rider started having a panic attack and had to drop back to another boat.

“It was never something we thought would happen and there was a bit of chaos as she had to move her feeds to another skipper. I kept asking my daughter what was going on, and she just told me to keep going, although I was very concerned.”

Rider says she hadn’t been able to catch her breath properly at first and had turned onto her back in fright. “I watched all the other swimmers pass me by and thought that perhaps it was not my time to swim. But with the help of a phenomenal skipper [Cape Long Distance Swimming Association Committee Member Michelle Petring], and myself having to dig very deep, we managed to get me onto my front and doing freestyle again. I knew my son was meeting me on the beach with Champagne! My legs were numb and I could barely walk, but I didn’t need to go far. A friend was waiting and opened her arms to me, and I just sobbed and sobbed.”

Skipper Michelle Petring says that Rider got her groove back relatively quickly. “It really is fascinating to watch how a swimmer makes the mental switch. Sue systematically reeled in the rest of our group on the water and ended up leading them into Big Bay to complete her swim in a really good time.” DM/ ML