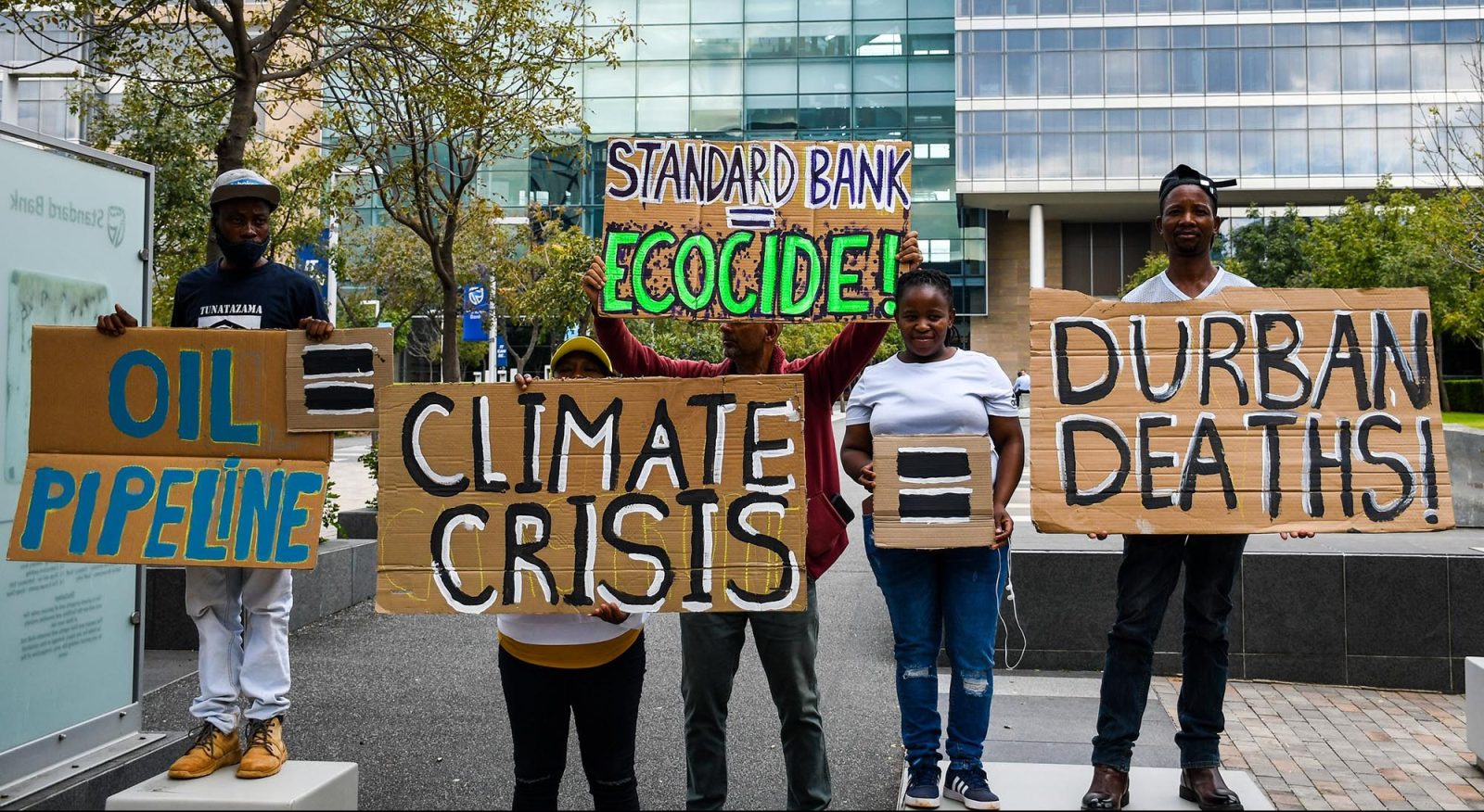 Activists drawing the link between the oil pipeline contributing to carbon emissions which leads to an increase in extreme weather events such as the recent KZN floods. (Photo: Julia Evans)

Standard Bank says it is committed to achieving net zero carbon emissions from its own operations by 2040 and from its portfolio of financed emissions by 2050, but still hasn’t withdrawn its involvement as financial advisers of what is projected to be the world’s largest heated crude oil pipeline.

The EACOP project plans to build a pipeline in 2025 spanning 1,400km across eastern Africa that will transport crude oil from Uganda to Tanzania.

Based on several human rights and environmental impact assessments, this project will be the world’s largest heated crude oil pipeline, the StopEACOP campaign said. “It will burn another six billion barrels of oil and generate over 34 million extra tons of carbon emissions each year.”

Extinction Rebellion activist Mduduzi Tshabalala said he took time away from his job as a street vendor selling vegetables and travelled from Sebokeng for this demonstration because, “this is going to affect everybody living in sub-saharan Africa”.

Tshaballa said coming from the Vaal area, his community understands the real-life impacts of carbon emissions and the climate crisis.

“In the Vaal, specifically, we are affected mostly by air pollution that has been happening… because of the coal plants, steel plants and other chemical plants we have. So the Vaal Triangle for instance, has been declared for more than 15 years as a priority area.

“So we see the impact. Because today, in the Vaal, areas like Parys, for more than two decades, they haven’t had clean water, because the Vaal Water is seriously polluted.”

The StopEACOP campaign reported that nearly a third of the EACOP pipeline will run through Lake Victoria, which more than 40-million people depend on for water and food production.

Mamosweu Tsoabi, a small-scale farmer from Sebokeng who attended the protest said, “I think this demonstration is very important for every living thing, because it’s all about climate change and things that impact climate change negatively.

“For example, I’m a farmer. So because of climate change, I’ve been affected,” said Tsoabi, explaining how extreme climate events like heat waves, droughts and floods have killed her crops, meaning she doesn’t have a source of income.

Impact assessments provided by the StopEACOP campaign indicated over 100,000 people across Uganda and Tanzania will lose the land they rely on for farming and livestock raising, and many will be forcibly removed from their homes. The pipeline will disturb nearly 2,000 square kilometres of protected wildlife habitats.

The EACOP project has $3,5-billion in investment and is in partnership with TotalEnergies, the French energy company; the China National Offshore Oil Corporation; Uganda National Oil Company and Tanzania Petroleum Development Corporation.

Standard Bank told Our Burning Planet that its participation in the funding of the EACOP project, “remains subject to the findings of environmental and social due diligence assessments and meeting the Equator Principles requirements”, adding, “It is also subject to a full assessment of the EACOP sponsors’ climate change strategies and targets”.

“As part of this process, the advisers have visited the project area and will issue a full due diligence report in the coming months, at which time potential lenders will make a decision on the way forward.”

Standard Bank published its climate change targets at the end of the first 2022 financial quarter where it stated its commitment to, “to achieving net zero carbon emissions from its own operations by 2040 and from its portfolio of financed emissions by 2050, aligned to the Paris Agreement”.

Standard Bank told OBP, “As the World Bank has recently argued, Africa’s recovery from the pandemic, and its medium-term development both require a degree of openness to further investment in ‘brown’ activities.

Sim Tshabalala, chief executive of the Standard Bank Group, said, “In our view, a refusal to accept this would amount to denying Africa’s right to sustainable development. Over the past several centuries, Africa has borne very considerable economic and human costs for other regions.

“A total or immediate ban on further transitional projects in Africa in order to help reduce environmental pressure in much richer regions would be a cost too far.

“Having said that, our long-term goal is clear. The Standard Bank Group will achieve a portfolio mix that is net zero by 2050.

“That will entail reducing our financed emissions and simultaneously scaling up our financing of renewables, reforestation, climate-smart agriculture, decarbonisation and transition technologies, and supporting the development of credible carbon offset programmes.”

Extinction Rebellion activist Tshabalala said, “Climate change is here and it is affecting mostly people who are already disadvantaged.”

Saying, if he had a message it would be, “if you could please implement more renewable energy projects, that will benefit all – the environment. Not just people.” DM/OBP