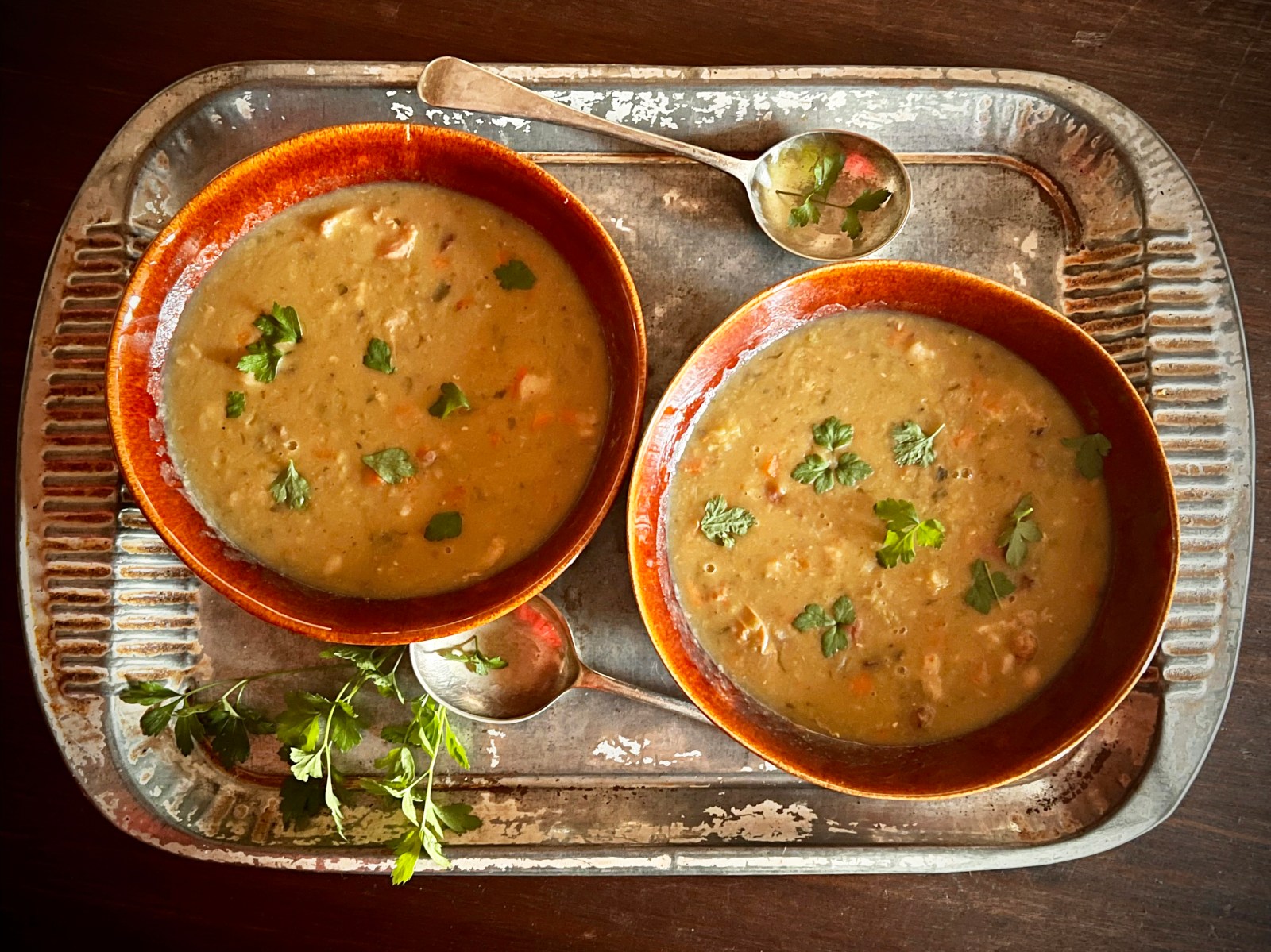 Call it bean soup, traditional bean soup, Karoo bean soup or anything else you like. To many of us it’s good old boontjiesop, and it’s a beloved national dish to be treasured in the long, cold months now beginning. Good old bean soup: it soothes the troubled breast while helping us see off the winter chill. But there are many ways to make it, so trawl through the world of boontjiesop with me and find the formula that suits you.

The whole world could use boontjiesop these days. A bowl of it takes your mind off the terrible things happening in the world, just as it deflects you from the usual worries about paying the bills, affording a holiday and getting the kids through school and further study. At the end of the difficult, long day, pull up a few chairs in the kitchen and ladle some boontjiesop into bowls. That’s what life is really all about, not all that other stuff.

When a recipe for a dish is featured in SJA de Villiers’ Cook & Enjoy, Renata Coetzee’s The South African Culinary Tradition and Leipoldt’s Food & Wine, you know it has deep roots and is the real deal.

Marrow bones are a favoured ingredient of a good boontjiesop. In the old days, many cooks would have added oxtail or mutton ribs to their boontjiesop, and some or other inclusion of pork would be pretty standard. Today, it would more often be bacon, but it would not ruin your soup to have a pork trotter in there, for instance.

Cook & Enjoy’s version calls for dried beans, “preferably red beans, such as sugar beans”, bacon or smoked pork rib or shin, optional beef shin, vegetables, garlic, potato, cooked green beans, a little lemon juice and of course lots of water. The recipe by Renata Coetzee (and she is to be taken seriously, as she was all about research when writing this important reference book) has only white beans but does call for marrow bones and pork speck (which was my choice for the recipe to follow). Though she uses no carrots or celery, she does use onion (but only 1), a sprig of parsley and that beloved spice of the old Cape kitchen, mace. You can read my thoughts on mace here.

C Louis Leipoldt can always be trusted to go a little deeper. “There are many kinds of beans and all, when dried, make excellent soup, though some, like the small black-and-white sort, have a peculiar flavour,” he wrote. “Perhaps the best of all is the large, almost inch-long and proportionately broad, beautifully marbled governor’s beans that could formerly be obtained cheaply but nowadays are quite costly.” His “nowadays” of course were nearing a century ago.

Leipoldt then offered what he called “an example of the general recipe for bean soup” and made from hereboontjies, which he termed the old name for the governor’s soup he wrote of. This was made as follows, as per Leopoldt’s recipe: Soak two pounds of beans in cold water; peel them, rejecting all that float. Braise some sliced onions, a small green chilli, a slice of green ginger, and some green herbs in butter or fat; pour over cold water, add the beans, a slice of fat pork and a mutton bone and let the whole simmer carefully for several hours, stirring the pot frequently and skimming carefully to remove the fat. Pour through the tammy, and separate the beans, keeping a few of them whole; mash the rest and return to the liquid. Salt and pepper to taste and boil for a quarter of an hour; add a glass of wine and serve.” (A tammy? This seems to be a drum sieve more accurately called a tamis, but pronounced tammy.)

Ah. Leipoldt’s glass of wine again. See? In pretty much everything. Note that he doesn’t even recommend cooking it into the soup, it’s added raw, as it were, right before serving.

Leipoldt concludes that it “should be a smooth white, moderately thick soup, which some people enrich by adding cream and egg yolk, although it requires neither, being by itself a nourishing and exceedingly palatable broth”.

Moving right to the present, the newest cookbook in my possession, which arrived last week, has a quality boontjiesop as its very first recipe. It’s my friend and esteemed food writer Michael Olivier’s recipe for which he offers a vegetarian version and a meat version, the only difference being that you add marrow bones and pork fat or bacon in the latter case.

Weighing up all of that and another Gordon Wright recipe in which he also includes dried split peas, I made my own version of boontjiesop this week, using some but not all of the various elements described here, but with one key difference. I have taken an untraditional route by using, not dried beans soaked overnight, but tinned beans, there now being a good variety of them available in cans. I used red kidney, cannellini, and speckled sugar beans, but I also soaked a packet of split peas in cold water for three hours to use those too. They do the job of thickening the soup for you, as well as adding an underbelly of flavour. The flavour of peas is not far removed from beans, after all.

Also into my soup went a trio of chillies, as many bay leaves, a nice hit of fresh rosemary, and I went big on that true tradition of the old Cape country kitchen: soup powder. I used a packet each of thick vegetable soup powder and tomato soup powder. The latter I chose instead of adding tomatoes themselves.

2 large carrots, diced (no need to peel, but do wash them)

A handful of fresh parsley, chopped

Soak the peas in water to cover, plus an extra litre of water, for 3 or 4 hours. Don’t drain them: the pea-soupy water goes into the pot.

Turn the oven on to 200℃ and, once it’s hot, put the bones in an oven pan and roast them for about 45 minutes. Let them cool.

Chop the pork fat into tiny pieces and put them in a deep, heavy pot on a moderate heat. Dice the streaky bacon. When the heat has drawn enough fat out from the lard, add the onions and streaky bacon and sauté for a couple of minutes, then add the chopped carrot and celery and continue to cook gently, stirring, until softened.

Add the roasted bones. Drain the water from the soaked peas into the oven pan, put it on a high heat, and bring it to a rapid boil while stirring to retrieve all of the meaty bits that have stuck to the bottom of the pan. Tip this into the soup pot, and add the soaked peas too.

Add the lamb stock (or use beef) and stir in the contents of the two packets of soup powder. While it’s coming to the boil, add the mace, rosemary, parsley, chillies and bay leaves, and extra water if everything is not fully covered. Season fairly generously with salt, but taste and stir as you go to ensure that you don’t overdo it.

Boil, then reduce to a constant simmer, and cook for an hour or so, stirring often to prevent it catching at the bottom. The peas in particular will tend to stick, so keep it moving.

Add the contents of the cans of beans (including the brine, which has both flavour and body), stir in the onion and garlic powder and white pepper to taste, and return to a simmer for 20 minutes or so. Taste to check the seasoning, and add more salt only if needed.

Now, this need not be blended, as the best result is a nice chunky, textured soup; this is not one for refinement. It’s hearty and a bit rough. It’s perfect to eat on its own as a cold-weather supper, but you could toast a few little squares of white bread in oil or butter in a pan and serve the croutons with the soup if you like. Remove the bones, or just ladle the soup out from around and in between them. No standing on ceremony with this one. DM/TGIFood