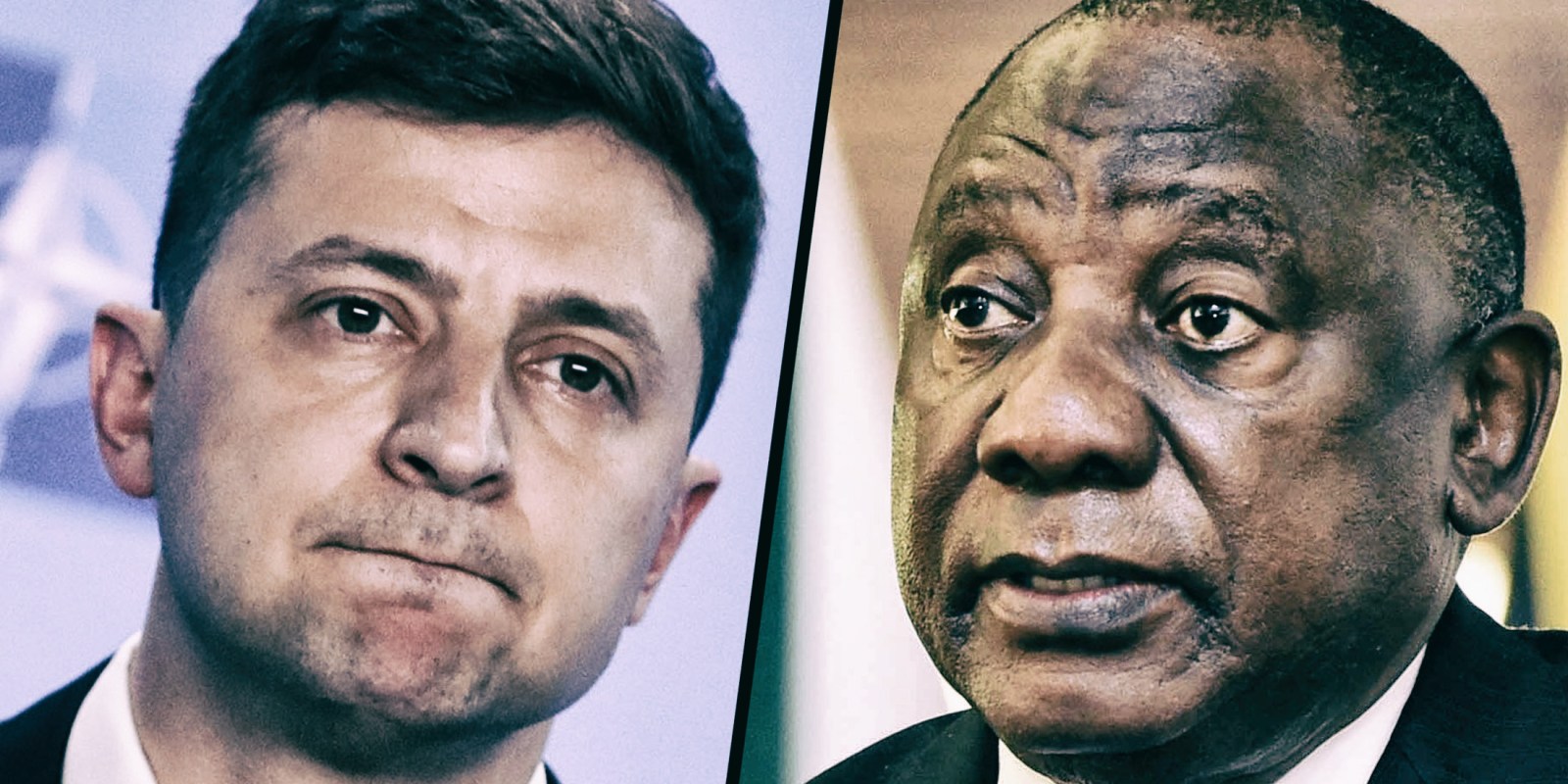 Seven weeks after talking to Vladimir Putin about the war, Ramaphosa discusses it with the Ukrainian president.

The long-anticipated and highly controversial phone call between President Cyril Ramaphosa and Ukrainian President Volodymyr Zelensky finally took place late on Wednesday night. Zelensky announced the call – which lasted about 20 minutes – in a tweet that gave little away about the tone of the meeting, or whether he had asked Ramaphosa to try to use his influence with Russian President Vladimir Putin to end the war.

Ukraine’s ambassador to South Africa, Liubov Abravitova, said that although South Africa had requested the call, Zelensky made the call to Ramaphosa “because of our circumstances”. In other words, it seems he had to find a moment between conducting the defence of his country.

The call took place almost two months into the war – and seven weeks after Ramaphosa called Putin to get his side of the conflict. South Africa requested the call with Zelensky only a week later – which clearly irritated Ukraine.

Had a phone conversation with @CyrilRamaphosa. Told about our resistance to Russian aggression. Discussed the threat of a global food crisis, deepening relations with the Republic of South Africa and cooperation within international organizations.

“Had a phone conversation with @CyrilRamaphosa. Told about our resistance to Russian aggression. Discussed the threat of a global food crisis, deepening relations with the Republic of South Africa and cooperation within international organizations.”

I had a telephone conversation with President @ZelenskyyUa of Ukraine to discuss the conflict in Ukraine and its tragic human cost, as well its global ramifications. pic.twitter.com/hDtGOJ56DU

He tweeted; “ I had a telephone conversation with President @ZelenskyyUa of Ukraine to discuss the conflict in Ukraine and its tragic human cost, as well its global ramifications. We agree on the need for a negotiated end to the conflict which has impacted Ukraine’s place in global supply chains, including its position as a major exporter of food to our continent. President Zelenskyy anticipates closer relations with Africa in future.”

Abravitova had told Daily Maverick in an interview last week that Zelensky would urge Ramaphosa to condemn Putin for his aggression against Ukraine, which entered a new phase this week with a major Russian offensive, of about 75,000 troops, against the Donbas region of eastern Ukraine.

“I think he would call on President Ramaphosa to accuse Russia for what is happening,” Abravitova said then. “There is not another way round this. It’s what he says to everyone. He will say it to the US, to the Europeans, to India and China. He will say it to South Africa and Brazil.

“Because there are not two readings and cannot be two readings about the invasion. He would ask the support of Ukraine with South Africa being the leader of the African continent. He would ask Ramaphosa to use his influence to stop Putin,” Abravitova said last week.

But it was not clear immediately whether Zelensky had in fact made all those demands.

Abravitova told Daily Maverick she was still waiting for a readout of the conversation.

The call between the two presidents had become highly controversial as Abravitova requested meetings with Ramaphosa and with International Relations and Cooperation Minister Naledi Pandor so she could establish what exactly Ramaphosa wanted to talk about to Zelensky.

Her requests irked the South African government, which accused her of being undiplomatic – and by implication presumptuous – in going beyond her status as ambassador by seeking a meeting with the President and foreign minister.

But she told Daily Maverick last week that in effect she believed the dire predicament of her country transcended the finer points of protocol and that it was important to ensure the call between the presidents was substantive and achieved a real purpose.

“I don’t think my request to meet the president as the ambassador of a country which is under attack, which affects directly the world economy, can be perceived as undiplomatic,” she said then. She noted that all around the world Ukraine’s ambassadors had been meeting heads of state because of the crisis in her country.

She also noted that the Department of International Relations and Cooperation had requested the call between Ramaphosa and Zelensky “to discuss issues of bilateral interest”. Abravitova suggested that she could not put such a bland request in the middle of a crisis. “Maybe South Africa doesn’t know there’s a war happening in that part of the world,” she remarked drily.

But judging by Zelenksy’s tweet, the two presidents did discuss bilateral – country to country – relations as well as the impact of the war on food prices and hunger. Ukraine is one of the world’s largest producers of wheat and sunflower oil, so the war has cut supplies of these products drastically and pushed up prices. The impact has been felt particularly hard in Africa and Ramaphosa may have raised this in his call with Zelensky.

The call should help to repair relations between the two countries which have become strained by South Africa’s diplomatic positions on the war. It has abstained three times from resolutions in the United Nations General Assembly condemning Russia’s aggression.

Pretoria insists it has abstained not because it condones Russia’s aggression, but because it believes that a balanced approach is necessary to try to find a diplomatic resolution to the war.

It has also hinted that it is maintaining a neutral stance in case it can play a role in mediating peace. On the day Ramaphosa tweeted about his conversation with Putin, Pretoria also revealed that the President had been asked to mediate, but without saying who had asked. DM

This is a developing story and will be updated.