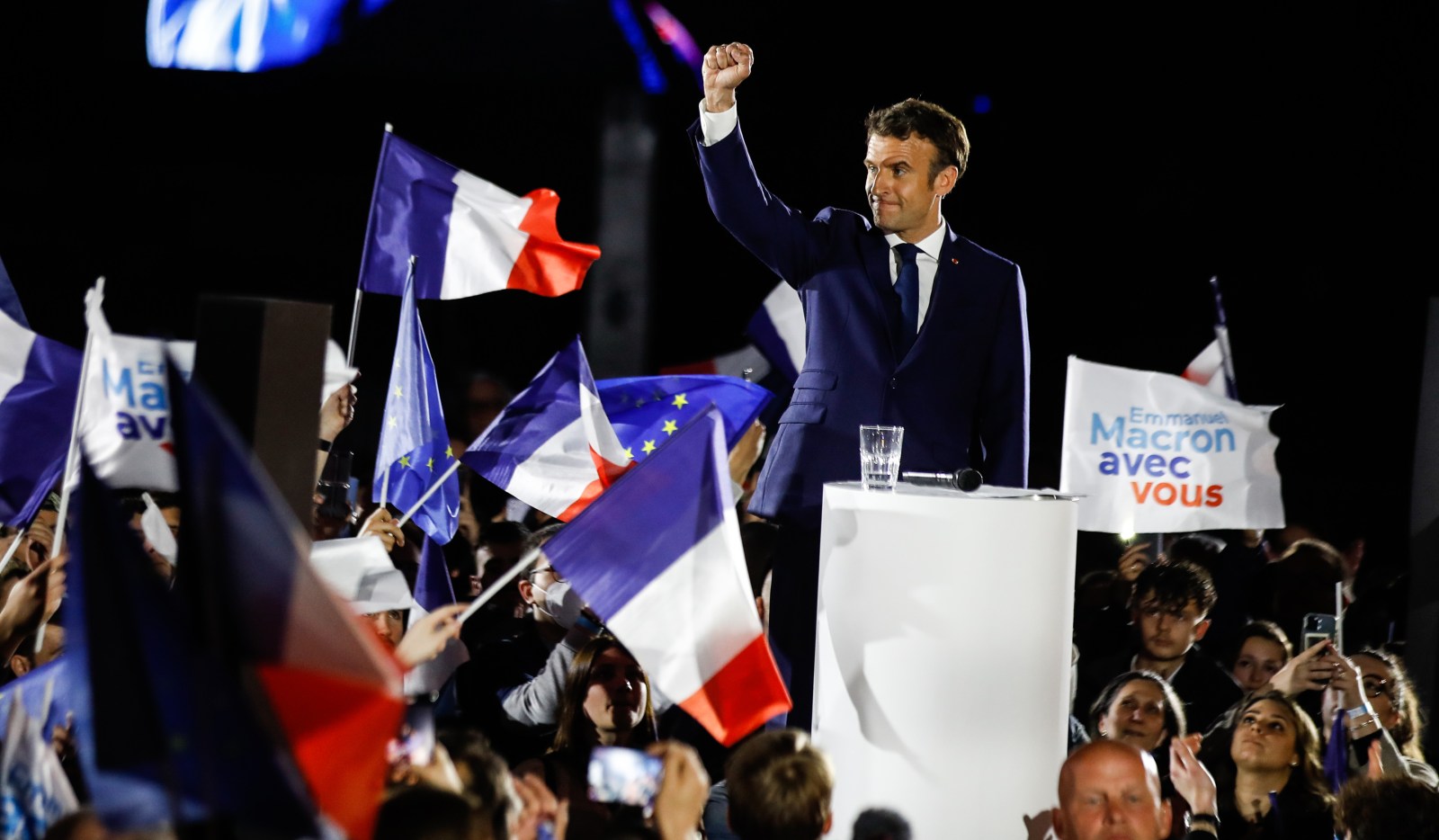 The results of round one show apparent stability, yet there’s also been a profound reconfiguration.

With the majority of the ballots counted on the morning of 11 April, the official results of the first round of the French presidential election appear to confirm the power dynamics at work from the previous election.

Emmanuel Macron (La République en Marche, LREM) and Marine Le Pen (Rassemblement National, RN) have made it into the second round – in the same order as five years ago, making it the second time the duel will take place. The last and only time this happened in France was when Valéry Giscard d’Estaing (RPR) twice faced off against François Mitterrand (Socialist Party), first in 1974, when the right-wing candidate won, and then in 1981, when the socialist candidate triumphed.

Such stability is largely linked to the main candidates’ clout. Already in the game five years ago, Macron and Le Pen have been able to retain a loyal electoral base. Over the past weeks new voters have rallied around them, prioritising a so-called strategic vote (“vote utile”) over partisan considerations.

Compared with 2017, Macron is up by nearly 4%. The rise is all the more notable given the incumbent president has abandoned the middle-ground stance between right and left that had ensured his initial success, and adopted an agenda that clearly places him on the centre-right of the political spectrum.

The move alienated a fraction of his voters from the left, but attracted a larger part of the voters from the centre and the right – a testament of which is the very low score (4,7%) of Valérie Pécresse, candidate of Les Républicains (LR).

Le Pen has risen nearly as much, with a score not achieved before by the Front National (FN) and then RN within the context of a presidential election. She too benefited from calls to vote strategically and was thus able to largely outperform Éric Zemmour (Reconquête), the former Figaro journalist and far-right candidate. Having initially undermined her leadership, in the end Zemmour helped complete Le Pen’s decade-long effort to “normalise” her candidacy. By claiming the niche of the identity-based right, Zemmour enabled Le Pen to stress the bread-and-butter issues that appealed to the working classes.

On the left of the political spectrum, Jean-Luc Mélenchon of La France Insoumise (LFI) obtained his best score in his third presidential election, also benefiting from the in extremis support of an electorate of the moderate left concerned above all to avoid a second round opposing Macron to Le Pen. Mélenchon came within less than 1.5 points of Le Pen’s score, yet wasn’t able to stop her and make it to the second round himself.

The momentum of the strategic vote, which picked up barely a month before the first round, appears to confirm the restructuring of the French political field around three major poles dating back to the 2017 election.

A liberal, centrist and European pole attracting, at every national election, a little more than a quarter of the voters but which, thanks to the mechanics of the majority vote, manages to dominate political life until now.

A populist and identity-based pole, today dominated by Le Pen and represented by two candidates whose cumulative score (more than 30%) constitutes an all-time record for the extreme right and populist identity in a national election in France: it is therefore this pole that has recorded the strongest surge over the past five years.

A radical left-wing pole, dominated by the La France Insoumise. If we include the results of the communist and Trotskyist candidates, this totals just under 25% of the vote.

Such a three-way split results in the marginalisation of the two political parties that have structured French political life since the 1970s, the centre-right Les Républicains (formerly the UMP) and the centre-left Socialist Party.

The decline of the traditional parties: An air of déjà vu

With less than 2% of the vote, the Socialist Party sees a decline that could merely be circumstantial. Such a turn of events is not without reminding of the fate of the Radical Party at the beginning of the Fifth Republic: having dominated the left at the time, the party had fallen victim to the bipolarisation of the political landscape set in motion by President Charles de Gaulle and had survived only thanks to a large network of elected representatives, mainly present (like that of the Socialist Party today) in the southwest of France.

The decline of the traditional right is another significant fact of this election, with LR candidate Valérie Pécresse gaining just a quarter of the score achieved by her party five years earlier. The result appears as yet another blow to Les Républicains, who recorded their lowest vote share in the 2019 European elections at 8.4%, in contrast to 20.1% in 2014.

It also goes to show the narrowness of the political space now occupied by this party, wedged between Macron’s centre-right and Marine Le Pen’s populist far right.

It’s important to interpret the results of this first round as a repeat of the 2017 election. The apparent stability of the balance of power masks important changes. The political landscape continues to shift rightward. Testament to this is the emergence of Zemmour’s identity-based platform and Macron’s renewed political offer. While Mélenchon made gains, they were not enough to compensate for the Socialist Party’s precipitous decline.

Populism also continues to grow. In five years and under the effect of a certain number of social movements (the Yellow Jackets in particular), its rhetoric has become more radical.

More than ever, the split between the people and the elite shows itself at the ballot box. This populist rise weakens Macron, whose position is less favourable than it may appear at first glance.

The incumbent president obtains scores comparable to some of his predecessors who were not re-elected for a second term: Giscard d’Estaing in 1981 (28% of the vote), Nicolas Sarkozy in 2012 (27%). Moreover, he cannot capitalise on the desire for change that largely explained his victory five years ago.

The campaign between the two rounds will thus bring into play two antagonistic projects, two visions of society, but also a tension between the “dégagisme” (a political ideology based on the French verb dégager, “to oust”, calling for the rejection of the established political class) hostile to the outgoing president, and calls by most first-round candidates for a collective front against the extreme right. DM168

French elections explained: How they work

The president of France is elected by direct universal suffrage, which means that all citizens of the country, who are at least 18 years old, can vote, “regardless of wealth, income, gender, social status, race, ethnicity, political stance, or any other restriction, subject only to relatively minor exceptions”. The “direct” part means that the votes go directly to the candidate, and not any political party.

There are usually two rounds in French presidential elections. (The only time the second round wouldn’t take place is if one of the candidates gets more than 50% of the vote in the first round, which has never happened since the system was put in place in 1962 at the start of the Fifth Republic.)

The list of candidates – in 2022 there were 12 in the first round, four women and eight men – is usually released seven weeks before the second round, at which time the official campaign starts. This is carefully monitored, as each candidate, according to the ministry for Europe and foreign affairs, “must have strictly the same amount of airtime on TV and radio” (not a small task when everyone wants to make sure their ideas are heard).

Both rounds of the elections always happen on a Sunday, so that a majority of people, who are usually off work on that day, can vote. There is also a digital system of “procuration” (proxy voting) that allows people who are not able to physically vote on the day to do so through someone else – providing that person is in the same voting place as they are.

The first round was on 10 April, when Emmanuel Macron won with 27.6% of the vote, followed closely by leader of Rassemblement National, Marine Le Pen (23.41%). It’s the third time in 20 years that the dangerous right-wing party will be present in a second round of the presidential elections.

The second round will be on 24 April – Macron has 15 days to gain the votes of La France Insoumise’s Jean-Luc Mélenchon.

The candidate with “the absolute majority of votes cast” – blank or spoilt votes are not taken into account – will be elected president for five years (although both Macron and Le Pen have been talking about extending the mandate to seven years again), says the foreign affairs ministry.

The announcement will be made on live TV, usually at about 8pm that same night. DM168