Making the move to the Karoo and South Africa's heartla... 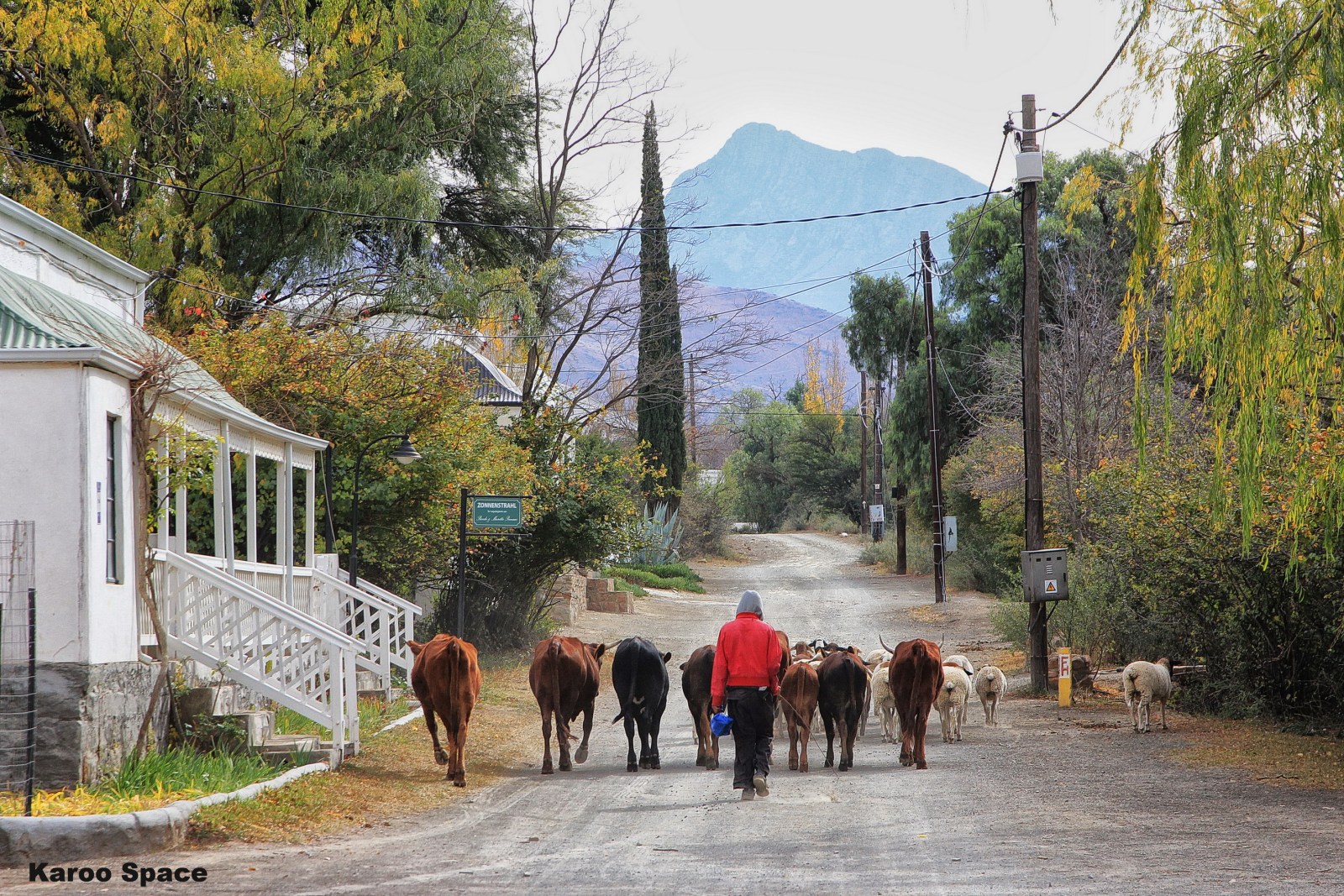 Nieu-Bethesda chooses dust over tar, when it comes to their village streets. Image: Supplied / Chris Marais and Julienne du Toit

Why moving permanently to South Africa’s dry heartland could just be the adventure you’ve been dreaming of.

South African interest rates are at a record low, making house purchases an easier option. Realising they can now work from home with a degree of success, many up-country urban residents are moving to Cape Town and the north coast of KwaZulu-Natal.

But this kind of splendid isolation comes at a price. If you have maybe R5-million-plus to spend on a (entry-level) dwelling in a lifestyle estate and a whole lot more besides to keep your business and family operational, all well and good.

For the rest of us, there is another, eminently more affordable, option: move to a Karoo town.

Hester Steynberg, who runs Ganora Guestfarm outside the Eastern Cape village of Nieu-Bethesda with husband Jan-Peet, is also an estate agent. Some of her recent buyers are those who fled the city before the national state of disaster was announced.

“There’s one buyer who used to travel a lot overseas for lectures and meetings. He locked down here and now he and his family are planning to buy as they saw how easily they could manage things, and that it wasn’t necessary to travel so much.

“Another one was a writer who came here to lock down on the spur of the moment. Other city people with IT-related jobs are planning to shuttle back and forth for two weeks at a time because they can mostly manage their workplaces from here.”

The same pattern has unfolded in other towns. According to Elaine Hurford of Country Estates in Prince Albert: “After lockdown, there was a sudden surge of property sales – pent-up demand plus new buyers wanting not to spend the next year or two locked down in cities. The day I reopened my office, I sold a big property to the nicest people who are now also our nearest neighbours.

Steytlerville is not nearly as trendy as Prince Albert, Napier and Riebeek Kasteel, so Linda Henderson of Henderson Properties in Steytlerville has been astounded by the bounce in house sales in her hometown, despite the surrounding drought-stricken veld.

One of the new buyers is Sjarma du Toit, who left a tedious job that required commuting between Pretoria and Sandton, to one of making hand-stitched ladies’ shoes in the Karoo. She has employed and trained 12 people in the town, and is setting up her Charming Shoes workshop next to her new home in the main road.

“I’ve got so many more friends here than in Pretoria. The atmosphere is more peaceful, less noise in the ears. We’re braaiing nearly every night.”

Running a city business from a dorp is the ideal. But to do that, good connectivity is essential. IT specialist Angelique Scheepers married a Karoo farmer and lives outside Cradock.

“I love country life, but I also know the internet is the future. It’s what connects people.”

She has supplied the bandwidth needs for Cradock’s farming and town community for years now, from dial-up to dongles, through ADSL and wireless.

Angelique’s company recently became part of HeroTel, initiated by Alan Knott-Craig and now linking up the platteland. Her CloudKaroo/Herotel bakkies are a common sight all over town, installing aerial fibre that with up to 100Mbps uncapped.

“So although we are a dorp, our internet speeds are similar to those in cities, at competitive prices.”

Vosburg is a tiny oasis village just off the R384 between Carnarvon and Britstown in the Northern Cape. In 2015, Frans de Klerk and his wife Erika arrived here from Gauteng and settled in.

As an independent technical adviser, Frans advises subscribers on stocks and shares, when to buy and sell using information captured on graphs. In addition, he has a programme on Business Day Television (BDTV) on Thursday nights, called Talking Technical, livestreaming the latest advice to investors on how to analyse share profiles, upswings and downswings on the JSE.

Frans has a website, a Facebook page and a Twitter account (@TraderFrans). He keeps in touch with his subscribers via SoundCloud podcasts, SMSs, newsletters and direct communication via internet hangouts and even (gasp) old-fashioned telephone conversations.

After some adjustments, he successfully transplanted his online business to Vosburg, where he gets to enjoy “deep analogue” village pleasures, such as a long evening walk along shady lanes. The De Klerks now also own a couple of guesthouses in Vosburg, mainly to cater for people attending the workshops and investment courses run by Frans.

It takes a village

Teachers Jeremy and Sharon Witts-Hewinson, who run a guesthouse in Klaarstroom, have taught at many country schools, including Union High in Graaff-Reinet. They list a few of the advantages: “Fresh air, literally being closer to nature and running around barefoot, climbing trees, paddling in rivers. Country kids know where their food comes from and are generally more self-reliant and confident than children hemmed in by security gates.”

There are far more private schools in small towns these days, interspersed with a fair amount of home schooling.

Yet, a surprising number of government schools offer good educations too.

When Dave Ker of Johannesburg and Lisa Antrobus of Cradock married, they decided to rather start a family in her hometown.

“In the countryside, children can stay children for longer,” says Lisa. “There’s no rush to grow up. There are plenty of other advantages too, like how close everything is. In less than 20 minutes, we can be picnicking in a national park. There’s a lot of extracurricular stuff here that you probably wouldn’t easily find in cities, like horse-riding and river paddling.”

For anyone who has ever driven through a ragged little South African settlement and wondered how the locals survive, here is one simple answer from Tarkastad-based magistrate Jo Els: “We breathe clean fresh country air every day, eat farm eggs and enjoy prime Karoo meat. We have an abundance of doringhout for our fireplaces and braai fires. The people of Tarkastad rely on each other and buy locally where they can. That keeps the town alive.”

The last two sentences are the most telling. Apart from a sense of community and proximity to nature, trust and reliance on one another are generally the greatest assets of a dorp. Small towns can be dirt-poor, grubby and irritatingly potholed on the surface, but super-rich on the inside. Not with money, but in the currency of social capital.

What Tarkastad’s Jo Els forgets to mention is that part of his town’s charm is the regular line-dancing class at the local M.O.T.H. hall.

For an insider’s view on life in the Karoo, get the three-book special of Karoo Roads I, Karoo Roads II and Moving to the Platteland – Life in Small Town South Africa by Julienne du Toit and Chris Marais for only R680, including courier costs in South Africa. For more details, contact Julie at [email protected]