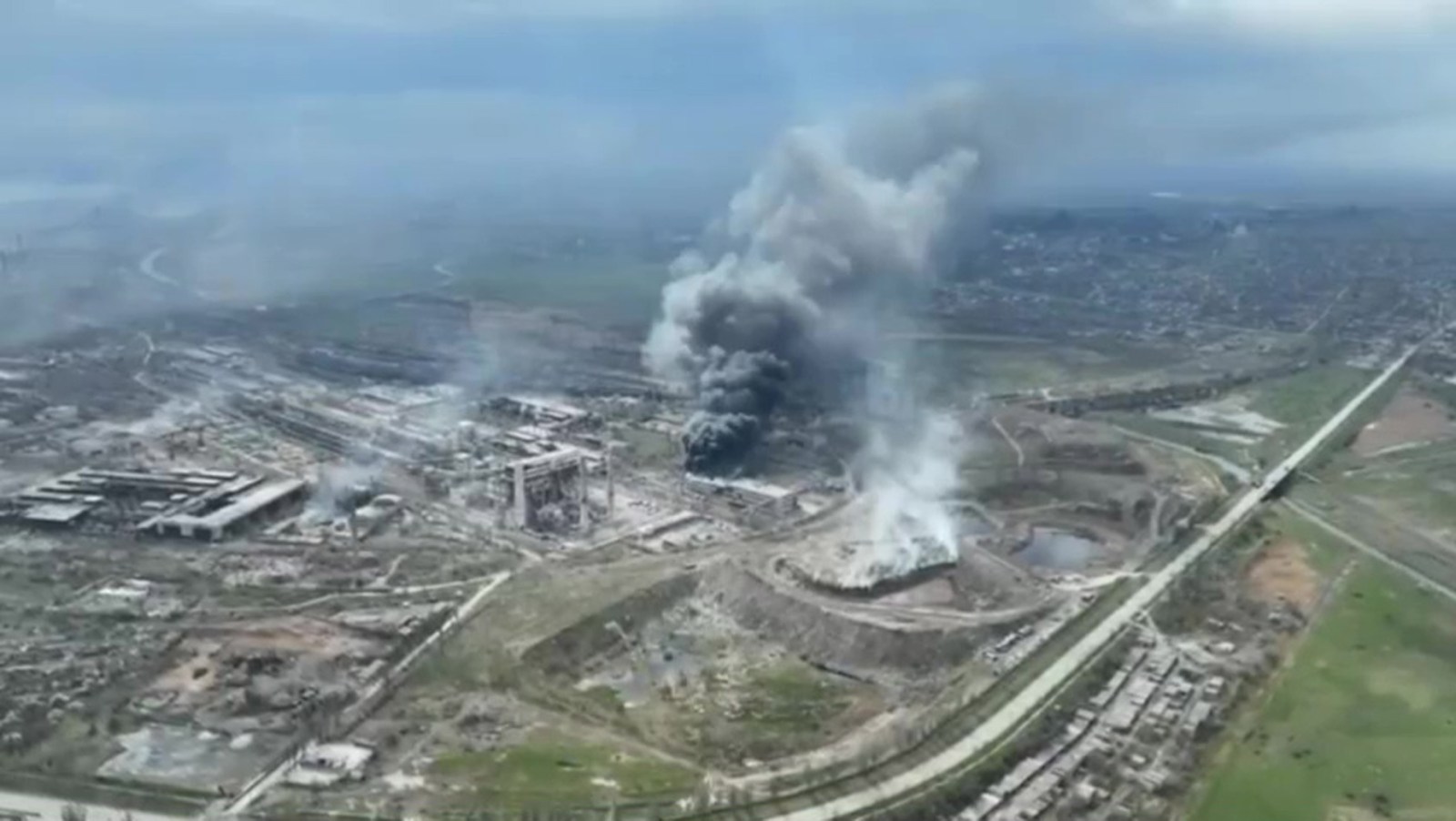 A frame grab from an undated handout drone video first published by DPR militia commander Alexander Khodakovsky and made available by the Mariupol City Council shows smoke rising from the Azovstal steel plant during airstrikes in Mariupol, eastern Ukraine, 18 April (issued 19 April 2022). The Russian Defence Ministry on 19 April 2022 issued a statement calling on the Ukrainian forces in Mariupol "to cease any hostilities and lay down their arms. All who lay down their weapons are guaranteed the preservation of life." The city council on 18 April 2022 via their official Telegram channel said that at least 1,000 civilians are sheltering in the underground shelters of the metallurgical plant, and that heavy bombs were dropped on the Azovstal plant by Russian forces. EPA-EFE/MARIUPOL CITY COUNCIL HANDOUT HANDOUT EDITORIAL USE ONLY/NO SALES

KYIV/KHARKIV, April 20 (Reuters) - Russia's latest ultimatum to Ukrainian fighters holding out in Mariupol expired on Wednesday afternoon with no sign of mass surrender as Moscow pressed ahead with its offensive in the east and Western governments promised Ukraine more military help.

Thousands of Russian troops backed by artillery and rocket barrages were attempting to advance in what Ukrainian officials have called the Battle of the Donbas – a final push by Moscow to seize two eastern provinces it claims on behalf of separatists.

Russia’s nearly eight-week-long invasion has failed to capture any of Ukraine’s largest cities. Moscow was forced to retreat from northern Ukraine after an assault on Kyiv was repelled last month, but has poured troops back in for an assault on the east that began this week.

The biggest attack on a European state since 1945 has led to nearly 5 million people fleeing abroad and reduced cities to rubble.

In the ruins of Mariupol, site of the war’s heaviest fighting and worst humanitarian catastrophe, Russia was hitting the last main Ukrainian stronghold, the Azovstal steel plant, with bunker-buster bombs, Kyiv said. Ukraine says hundreds of civilians are sheltering beneath the factory.

Russia has been trying to take full control of Mariupol since the war’s first days. Its capture would be a big strategic prize, linking territory held by pro-Russian separatists in the east with the Crimea region that Moscow annexed in 2014.

Russian-backed separatists said shortly before a 2 p.m. (1100 GMT) Wednesday deadline that just five people had surrendered, a day after Russia said no-one had responded to a similar surrender call.

Ukraine has vowed never to surrender in Mariupol and its general staff said fighting was continuing at the plant.

Ukraine announced plans to send 90 buses to evacuate 6,000 civilians from Mariupol on Wednesday, saying it had reached a “preliminary agreement” with Russia on a safe corridor, the highest profile announcement of such an attempt for weeks. Moscow has blocked all previous attempts to send convoys to Mariupol, including one by the Red Cross at the end of March.

Civilians have been able to escape to other parts of Ukraine only in their own vehicles, while tens of thousands have been bussed to Russia in what Moscow calls humanitarian evacuation and Kyiv calls forced deportation.

Once a prosperous port of 400,000 people, Mariupol has been reduced to a blasted wasteland with corpses in the streets and residents confined to cellars. Ukrainian officials say tens of thousands of civilians have died there.

The battle for the Donbas region could be decisive as Russia searches for a victory to justify President Vladimir Putin’s Feb. 24 invasion.

Peace talks have been stalled. The Kremlin accused Kyiv of delaying the talks and changing its positions. Kyiv accuses Moscow of blocking talks by refusing humanitarian ceasefires, especially to relieve besieged Mariupol.

British military intelligence said fighting in the Donbas was intensifying as Russian forces tried to break through Ukrainian lines and disrupt its reinforcements, and that Russia was still building up forces on Ukraine’s eastern border.

Moscow is hoping its advantage in firepower will give it more success against Ukrainian defenders than in the failed campaign against Kyiv, when its overstretched supply lines were attacked by nimble small units.

Within a day of launching the Donbas offensive, Russian forces captured Kreminna, a frontline town of 18,000 people, on Tuesday. Ukraine’s general staff said Russian forces had attempted an offensive near Kharkiv, the country’s second biggest city, which is close to Russia’s supply lines to Donbas.

Inside Kharkiv, where at least four people were killed in missile strikes on Tuesday, the body of an elderly man lay face down near a park on a suburban street, a ribbon of blood running into the gutter.

“He worked in security not far from here,” a resident named Maksym told Reuters. “The shelling began and everyone fled. Then we came out here, the old guy was already dead.”

Charles Michel, head of the European Council that groups the 27 EU member states, arrived in Kyiv as the latest European official to visit and demonstrate support.

The All England Lawn Tennis Club, which organises the grand slam event, did not immediately respond to a request for comment. Kremlin spokesperson Dmitry Peskov said: “To make sports people hostages of political intrigue is unacceptable.”

The White House said new sanctions against Russia were being prepared and U.S. President Joe Biden is expected to announce a new military aid package about the same size as last week’s $800 million one in the coming days, sources told Reuters.

Germany, where the Social Democrat-led coalition government has come under pressure both at home and from Kyiv to do more to support Ukraine, said it had sent some weapons that had not been announced publicly.

The Pentagon said Ukraine had received more military aircraft from abroad, giving few details. It did not say who had sent them, but said they did not come from the United States.

Russia has denied using banned weapons or targeting civilians and says, without evidence, that signs of atrocities were staged.

By Pavel Polityuk and James Mackenzie.