A flicker of hope, but voters expect little gain from Wolseley by-election 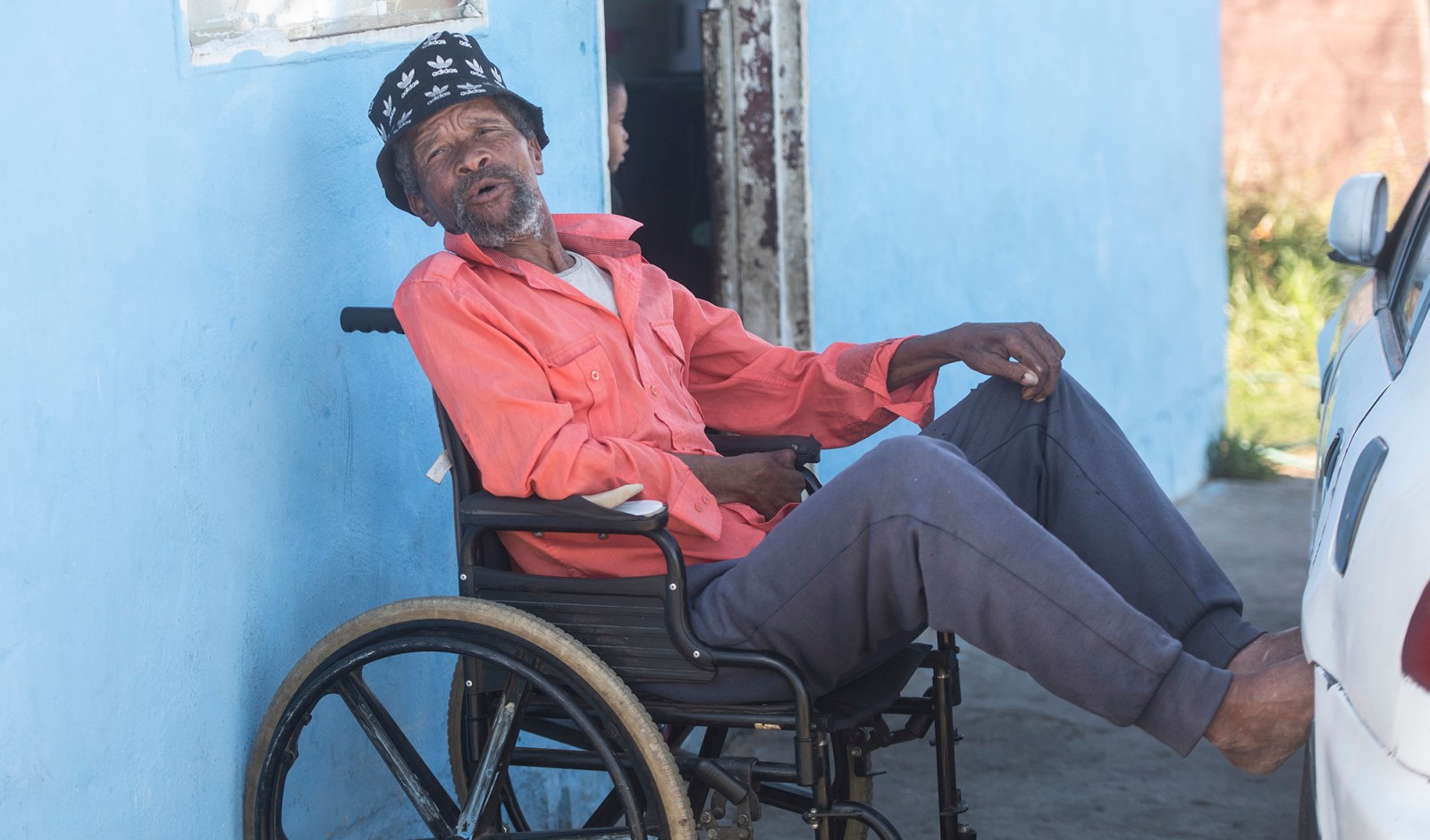 Joseph Richard, a 60-year-old from Wolseley, sat outside his home as political parties paraded through the town during a by-election in his ward on Wednesday, 20 April. (Photo: Brenton Geach)

The people of this tiny Western Cape town hope for change in the latest by-election, but they’re not holding their breath.

‘How many years have I voted? From that vote, I’ve never seen any change,” says Joseph Richard from Wolseley, Witzenberg. Richard, 60, sat outside his house opposite the Wolseley Secondary School on Wednesday. He watched from his wheelchair as members of political parties drove past, playing loud music from their cars.

A by-election was being held in Ward 2 of the Witzenberg municipality, which covers Wolseley. 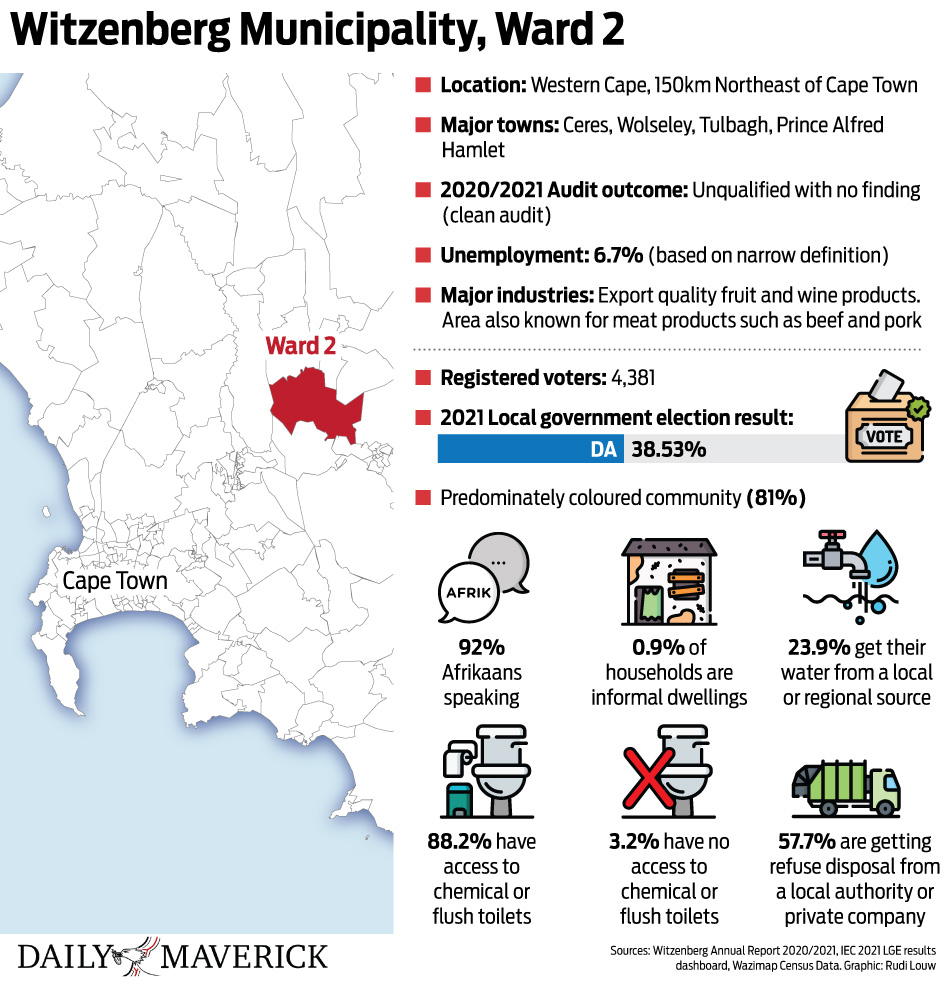 Richard has lived in the small Western Cape town for about 30 years. He said he had voted that morning.

Richard said he’d voted for various political parties in the past, but nothing had changed for him. He pointed at his house, saying that a promise was made five years ago to upgrade it. This never happened.

Richard’s house was built 20 years ago. It’s cramped with a small combined kitchen, living room and bedroom. The only privacy is in the bathroom. There are 10 people living in the house: Richard, his three sons, their partners and their children. Richard’s daughter stays with an aunt to be near her primary school.

According to Richard, the municipality said it would upgrade his bathroom and add another two bedrooms. That was in 2018. Since then, he had an accident while working and had to have steel plates inserted in his lower back. He now uses a wheelchair.

Richard survives off a pension and with financial help from his children.

He said the area was run down and needed to be maintained. Pointing at a group of passing children, he said: “Look at how our children are walking in the road? How many times have we asked for a pavement?”

He said there was a problem with unemployment in Wolseley, especially among young people. “There’s nothing here, really,” he said.

Witzenberg is a rural area about 150km from Cape Town in the upper Breede River Valley region. The area produces export-quality fruit and wine as well olives and grains, according to the municipality’s 2020/2021 annual report.

Richard said drug abuse was rife in the community. “Young children smoke tik until they can’t anymore,” he said.

Maria Beukes has lived in Wolseley for 10 years and, like Richard, had voted in Wednesday’s by-election. She said she lived alone, had no income and often depended on the goodwill of others for food and other support.

She, too, is concerned about the drug problem in the town. She said unemployment was also a major issue.

Daily Maverick saw several people, young and old, wandering about the town or loitering aimlessly in the streets. Some sat on the pavements, others outside local shops.

Elton Sylvester moved from Bellville in Cape Town to Wolseley after meeting a woman who he married. He said there were few jobs apart from seasonal work on nearby farms.

“When there’s no fruit, there’s nothing,” he said.

Sylvester was among those who voted on Wednesday morning. He told Daily Maverick there was a problem with municipal office staff unable to speak Afrikaans. According to the latest available census data, the community is 92% Afrikaans-speaking, with just 2% reporting English as their first language.

“You need to be able to speak two languages,” he said, adding that many people, particularly the elderly, had never been taught to read or write in English.

Wednesday’s by-election came about after the death of a DA councillor who won the ward during the 2021 municipal elections. The councillor won 38% of the vote.

There was a hive of activity around the voting station at the school, with bright orange, green, red, and blue T-shirts representing the DA, GOOD, the ANC, the Independent Civic Organisation of South Africa and the Patriotic Alliance. Outside the school gates, representatives of political parties were talking to residents. Inside, classes continued as usual.

The only candidate Daily Maverick saw was the Patriotic Alliance’s 32-year-old Lindsay Segrys. She said she was standing as a community leader and as a young woman.

Segrys said young people needed to stand up in the community as previous leaders “talked big” but did not take the needs of the youth into consideration when making decisions. She said there was a lack of facilities for abused women as well as a lack of rehabilitation facilities for drug addicts.

In the streets around the polling station, Daily Maverick observed the PA offering to transport people to vote while GOOD representatives went around the area on foot. The ANC blasted music from a speaker mounted on a bakkie while encouraging people to vote.

Results of the by-election will be available on Thursday. DM

Update: The DA retained the ward, getting 85 more votes than the ANC, according to elections analyst Wayne Sussman. The ANC made meagre gains while the DA lost some ground. Icosa finished third as it and the Patriotic Alliance (PA) exhibited the most growth. GOOD lost some ground and slipped to fifth place in the seven-party by-election line-up. Read the full report, and the outcome of other by-elections  here: