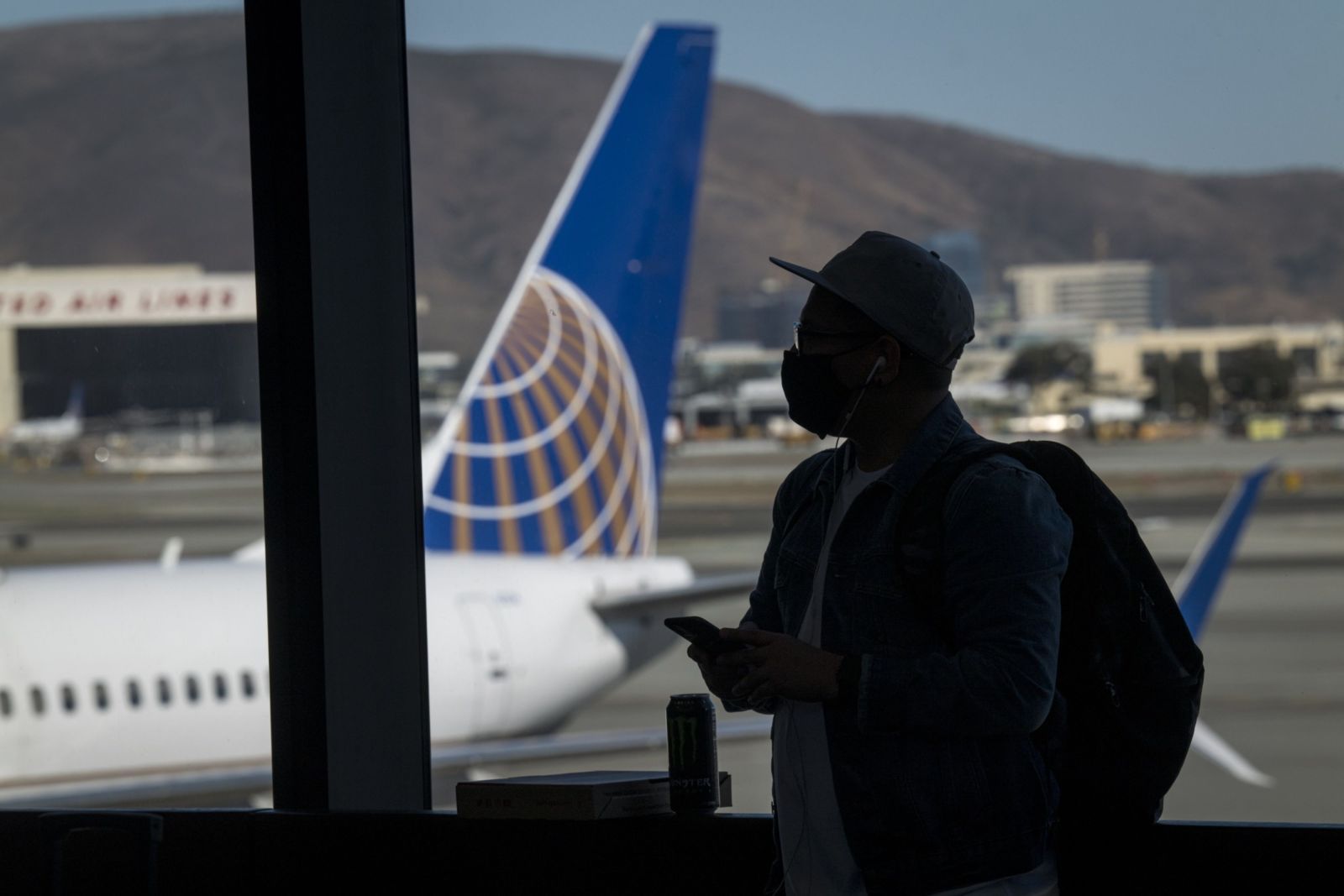 A traveler wearing a protective mask waits to board a United Airlines Holdings Inc. flight at San Francisco International Airport (SFO) in San Francisco, California, U.S., on Thursday, Oct. 15, 2020. United and Hawaiian Airlines are offering options for Covid-19 testing to passengers traveling to the state of Hawaii that will include at-home tests, drive-through testing, and in-person tests at the airport. Photographer: David Paul Morris/Bloomberg

Most major US airlines are no longer requiring travelers or employees to wear face coverings on domestic and some international flights.

Most major U.S. airlines are no longer requiring travelers or employees to wear face coverings on domestic and some international flights.

The decisions came hours after a U.S. judge on Monday overturned a federal mandate for passengers to cover their faces. The U.S. Transportation Security Administration said after the court ruling that it would stop requiring passengers on planes, trains and other public transportation to wear masks “at this time.”

JetBlue Airways Corp. said on its Twitter account that “in line with Monday’s federal court ruling and the TSA’s guidance, mask wearing will now be optional on JetBlue within the U.S. While no longer required, customers and crew members may continue wearing masks in our terminals and on board our aircraft.”

Delta said customer communications and signs in airports will be updated to reflect the change, and cautioned that local mask mandates may remain in effect.

“We are relieved to see the U.S. mask mandate lift to facilitate global travel as Covid-19 has transitioned to an ordinary seasonal virus,” the Atlanta-based carrier said in a statement.

In spite of the easing, most people weren’t in a hurry to take their masks off immediately. At San Francisco’s airport, most passengers and employees still had their face coverings on Monday night.

“That’s fine but I just prefer to wear my mask in these kind of open spaces,” said Camila Crews, 39, who was getting on a flight to Los Angeles. “The masks have been working.”

United, which among was the first of the U.S. airlines to drop its mask mandate, told employees they’ll be spared the task of forcing passengers to comply with Centers for Disease Control and Prevention guidelines.

“This means that you are no longer required to wear a mask — and no longer have to enforce a mask requirement for most of the flying public,” the Chicago-based carrier said in a memo to staff.

Earlier this month U.S. airlines had asked the Biden administration to end its masking requirement for public transport, but last week the CDC extended the ban until May 3. The CDC said late Monday that the national mask requirement on public transportation is no longer in effect, citing the court ruling .

Mask mandates have led to a marked increase in disruptive passengers and airline employee assaults since being imposed in early 2020.

“I am very relieved,” said Lillian Fakatou, 24, who was flying to Salt Lake City from San Francisco after the court ruling. “I am so much happier.”

Airlines have also pressed for a new “no-fly” list for passengers who assault their workers or fellow air travelers. Alaska said Monday that it would continue to ban some past customers “whose behavior was particularly egregious” even after the era of mandatory mask wearing is over.

“We fully recognize that enforcement of the mandate has placed an incredible burden on flight attendants,” the Association of Professional Flight Attendants, which represents more than 24,000 flight American employees, said in a statement.

The airlines said they also will not require the use of masks at boarding gates or elsewhere in airports.  BM