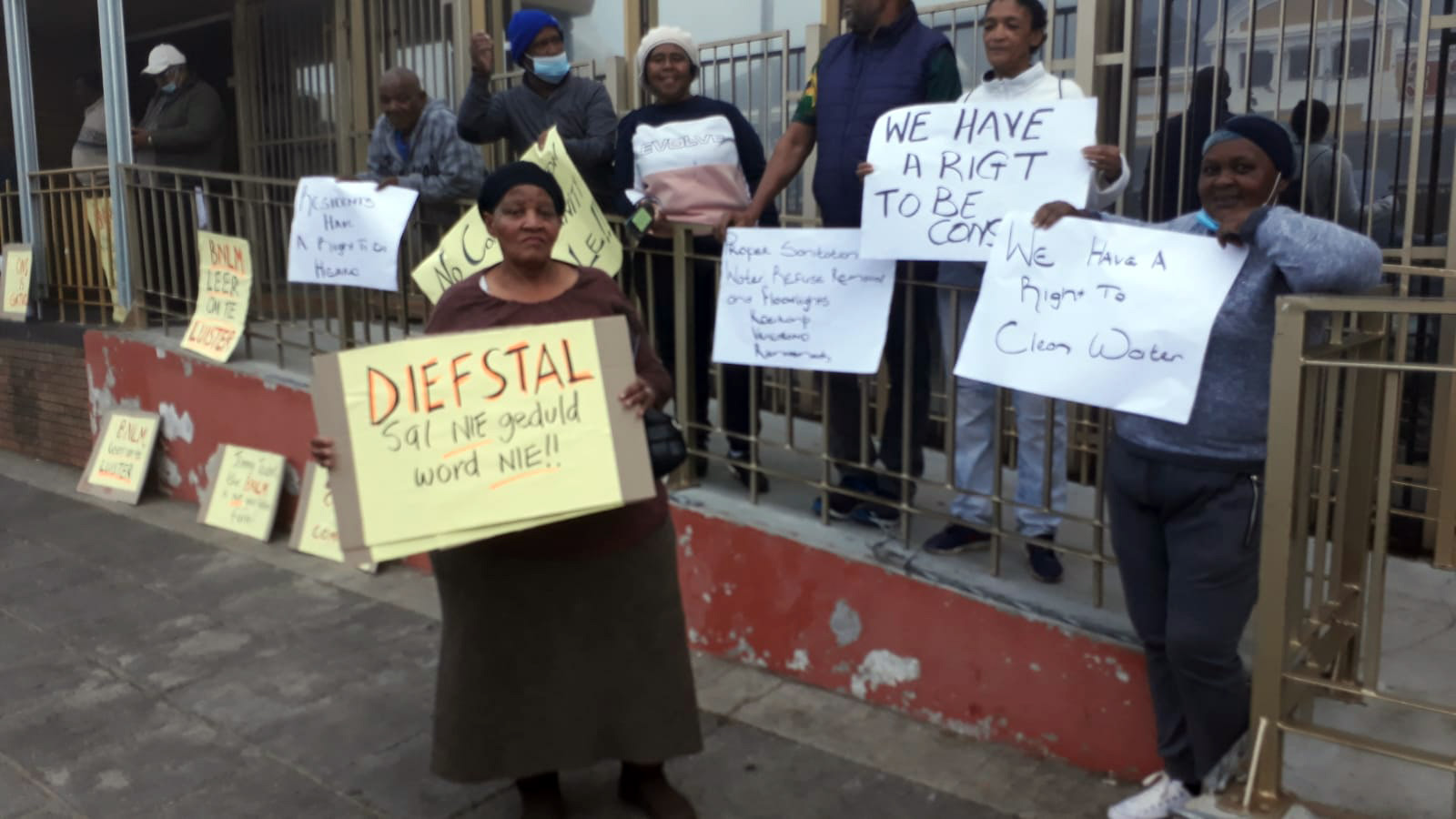 Protesters in front of the Graaff-Reinet municipal offices voice their anger over the auction of municipal land. (Photo: Supplied)

Farmers and residents of the debt-ridden Dr Beyers Naudé Local Municipality are furious about an attempt to auction off a pool, an airfield, a caravan park and other ‘uneconomic assets’.

Angry Karoo residents welded shut the gates of the Dr Beyers Naudé Local Municipality premises this week, angered by a council decision to sell some of the town’s prime real estate to try to reduce debt running into the hundreds of millions of rands.

The Graaff-Reinet airfield, two open pieces of land, the former municipal swimming pool and the caravan park, with a starting bid of R3-million, were scheduled for auction on 24 March.

But the sale was called off after the residents protested. Earlier in the week, the caravan park was removed from the list of properties on the block.

One protest was led by Gaob Japhta and the local farming community’s trusted herdsman, Ali Japhta. Farmers on two commonage farms fear the land they live on and work will be sold. These farms were on an early list, but were removed.

The Karoo municipality’s debt is estimated at between R360-million and R400-million.

Smith said this week residents had not received an answer from either of them.

On 11 December 2020, the Dr Beyers Naudé municipality published a notice indicating it intended to sell 12 pieces of real estate in the area to cover its debts.

The public were given until 11 January 2021 to comment on the decision.

The properties included the Urquhart caravan park, the Palms swimming pool, the botanical gardens, the golf club, the airfield, the brickfields and the quarry in Graaff-Reinet. Also listed were Fonteinbos Nature Reserve outside Aberdeen, Hardwood farm in Klipplaat and Karoo Vlakte farm – both the latter being commonage (meentgrond).

On 22 February 2021 a lawyer’s letter was sent to the municipality by the Legal Resources Centre, on behalf of the Service Delivery Movement, saying the council had contravened the Municipal Systems Act of 2000 by failing to allow for community participation in the decision-making process.

“It was stated that public participation was crucial as these properties do not belong to the municipality but to the community,” Smith said. “We don’t have a problem with the sale of these properties in principle – but we do have a very big problem with the principle that it can be done without talking to the community. The councillors in this municipality are invisible. They just sit around waiting for their salaries each month.”

Smith said a large majority of the community felt the muncipality’s financial woes were due to mismanagement and vandalism, “despite an alleged R1.2-million contract with a security company to safeguard public property and the failure of the municipality to secure payment of thousands of rand in terms of an existing lease agreement”.

The municipality did not respond to the letter. It did, however, publish a notice in the local newspaper inviting comment on the decision to sell the 12 municipal properties. No auctions went ahead.

Smith said Karoo Vlakte farm identified for sale was in Nieu-Bethesda but the farm the community called Karoo Vlakte was in the Jansenville area.

“A considerable number of letters were submitted by members of the community opposed to the alienation of municipal assets but, to date, none of these letters were responded to,” Smith said.

In March, the Dr Beyers Naudé municipality, currently run by a fragile coalition led by the DA, again put some of the properties up for auction.

“They did so without responding to any of the letters submitted by members of the community and without engaging with the community in any other way. The private auction was scheduled for 24 March 2022,” Smith said.

The Save Dr Beyers Naudé Local Municipality movement was set up and publicly opposed the sale.

On 22 March, a petition with 425 signatures was delivered to the mayor, Ewald Loock of the DA, calling for consultation.

On 23 March, council speaker Cheslin Felix announced the private auction had been postponed until further notice. He said he had “deliberated with council partners and received a request from the ANC caucus” to postpone the sale until after a special council meeting on 29 March.

Smith emphasised that the council cannot deliberate and decide on the matter without consulting residents.

On 28 March, the members of Save Dr Beyers Naudé Local Municipality sent a letter to the speaker emphasising that public participation is mandatory and not discretionary.

Municipal officials then met Save Dr Beyers Naudé Local Municipality representatives and told them the land assets were not generating income and were a financial burden.

Chief financial officer Jimmy Joubert told the community that millions were owed to Eskom, the Government Employees Pension Fund, SARS, the Auditor-General and the Local Government Association. He added that proceeds of the auction would not cover all current debt, only urgent debt.

Joubert attributed the poor financial position to historical debt inherited through amalgamation with other municipalities, Ikwezi and Baviaans, and a failure of the national government to meet promises to help out.

Municipal officials then said that “everyone living in the municipality” was responsible for the financial crisis.

After this meeting, the municipality tried to sell the airfield in an urgent auction with a reserve price of R800,000 on 13 April. This auction was cancelled at the last minute.

“Allowing the auction of municipal assets to go ahead without proper public participation will send out a message that the Dr Beyers Naudé municipality is above South African law and the Constitution… This will promote a culture of lawlessness that should not be tolerated,” Smith said.

‘They must talk to us’

Daantjie Japhta, who served two terms as mayor of the now defunct Camdeboo Municipality, said when he left his position the town of Graaff-Reinet was R85-million to the good. He said properties such as the public pool should be fixed and used.

“I know they say there is no water but there is a fountain right next to that pool,” he said. “What we are asking is for the municipality to sit with the people. If they ask us to help fix properties we can do that. But they must talk to us. We all want to fix the town.”

He said a number of lists were doing the rounds naming properties earmarked for sale, including community farms.

“The farmers live there. They keep their sheep, their cattle and their other livestock there. It is their whole life. We need to know what is going on.”

Mayor Loock said the council had followed the rules and accepted a proposal by its executive committee to sell the land.

He said the current council consisted of 24 councillors who were legally elected as the representatives of the community and residents should recognise this and respect their decisions. DM168