DIP IN THE OCEAN 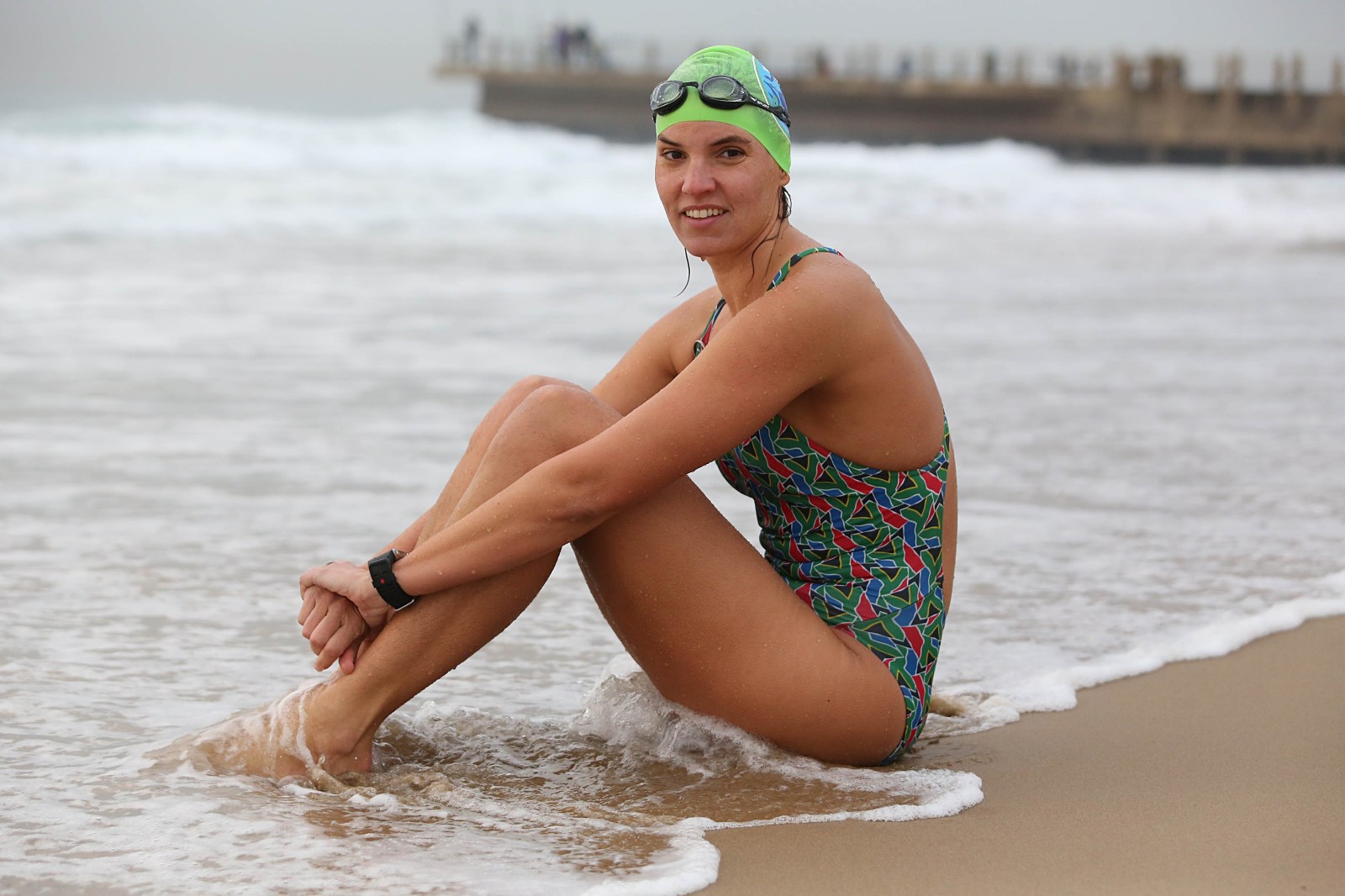 Despite daily rough weather, high seas, cold water swims and exhausting boat rides, extreme environmental activist Sarah Ferguson refuses to back down from the toughest swim of her life, and the toughest message to sell – that of the magnitude of plastic pollution in the sea.

Extreme swimmer Sarah Ferguson, who has been swimming from Durban to Cape Town, without a wetsuit – covering between 20 and 30km a day with a strong current-assist – to raise awareness about plastic pollution in the sea, has hit the wall and the halfway mark and called a rain check until November 2022.

It’s back home to her cats in Durban, via a mate’s house in the Berg, and some serious R&R and restrategising for Ferguson, a retired national SA swimmer and physiotherapist, who became the first person to swim the 63km around Easter Island in 2019.

She had always planned to break the 1500km swim, which she started in February this year, into two segments. She had planned to swim throughout April or until she reached Mossel Bay. However, recent cold fronts and strong winds, together with a lack of funding, forced Ferguson and her team to call off the swim earlier than planned, although she has still swum more than 760km in just 30 separate swims. She made it to Gqeberha in early April, buoyed up by a recent cash injection from two national corporates, Nampak and Mr Price Sport, only to be confronted with heavy seas, a projected four-day cold front and a long, deep and busy Gqeberha harbour.

All along the coast, communities have flocked to the beach to welcome Ferguson in from her swim, and she has spent time addressing school kids about marine pollution in various locations, including Port Alfred.

However, in recent social media posts and videos, a visibly exhausted and downbeat Ferguson has been revealing the sheer extent of the challenge. Having taken out a loan in order to part finance her swim, she says the lack of sponsorship is still a problem, and that she underestimated just how gruelling swimming every day would become.

“The last two weeks have been really tough for me mentally. I don’t think I have ever been as mentally fatigued in my life, and having to dig as deep as I have for a swim as I have in the last three or four swims. To be honest I’ve never had to dig really deep in any of the swims I have done before, even though they were tough in different ways. I haven’t really felt like I’ve spent everything that I’ve had. This swim has taken everything out of me,” she says.

Nevertheless, she explains, she has given up everything to spread the message about the scourge of plastic in the oceans, and she still needs to get that message across.

“If you just look at what is happening with the Durban and KZN floods, you see how bad the problem is. Inland the plastic is washing into the road. The beaches are horrendous. Climate change is real and we need to take a wake-up call as consumers. People should be taking notice. It is causing havoc in our marine life and in our own lives. That’s how I stay so focused.”

She says that if finances hadn’t been an issue, she would have probably been in a better mental state, but that stress, combined with logistical headaches such as identifying viable launch sites and finding the Agulhas current some 40km out to sea, rough weather, and managing team dynamics, had been enormous. Not to mention the increasingly cold water from the Transkei coast southwards.

“Decisions are made daily. We don’t even know where we are staying half the time, or where we are going to come in. We burn fuel to get out to the backline and the current isn’t doing what it’s supposed to be doing, or the wind’s going in the other direction or stronger than the current. We can end up swimming backwards and we have to make a call and take a gamble on how far I am going to try to swim.”

She says trying to keep something in reserve for the next day’s swim was hard. “I can’t break myself on every swim because I’ve got so much further to go. It’s those constant decisions that are exhausting, on top of not sleeping well due to all the adrenalin. I’m at my end, exhausted physically, mentally, emotionally. Everything seems to be counting against us, so we’ll go home early and come back in November or December. It’s a good decision and we’re proud.”

Ferguson says temperatures of 18˚and below came as a shock to her, never having swum longer than two or three hours in cold water, for example on a Robben Island swim. “And it’s not even that cold in terms of Cape Town standards. Going from 25 and suddenly hitting 18 is a big shock. You’re already at a deficit and your body is burning huge calories… It’s hard to embrace that water temperature, especially when you have to then get out into freezing wind and face a three-hour boat ride back to shore. So we’re learning a lot of tricks on how to keep me warm and dry.”

For now, though, it’s time to rest up and soothe frazzled nerves. “We’re gonna spend a few days escaping the world. I’m not ready to face the world yet. I’m very keen to jump into a warm, calm swimming pool!” DM/ ML

To find out more about Sarah Ferguson’s project and future swims, click here and here, for the backabuddy campaign.