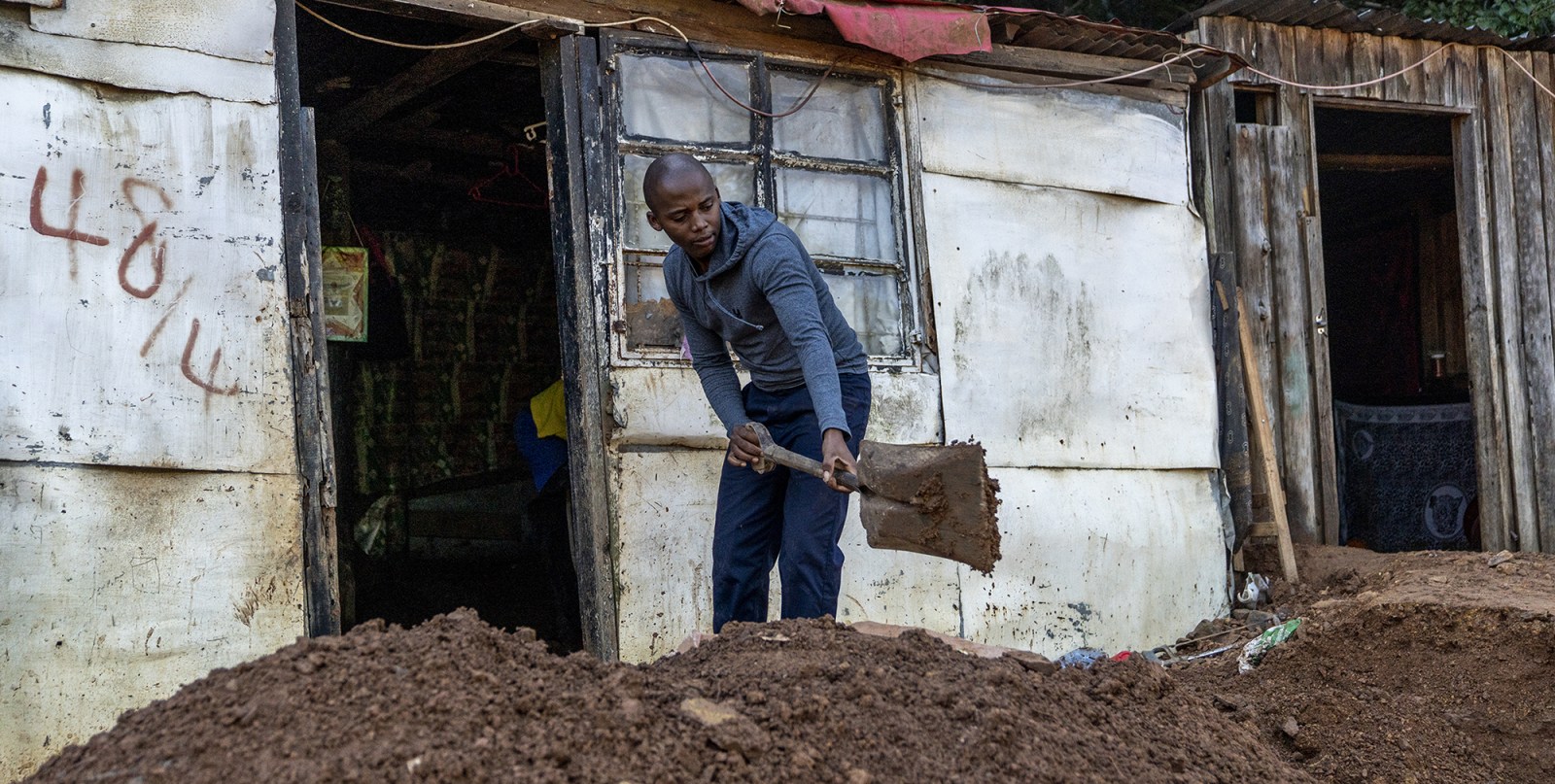 An Inanda resident clears away mud following the flooding on 15 April 2022. More than 400 people died when heavy rain and floods swept away homes and destroyed infrastructure in KwaZulu-Natal. (Photo: Shiraaz Mohamed)

It has been a week since the flood hit and still the community of Nthungwane Extension 5 in KwaZulu-Natal is waiting for the arrival of search and rescue teams. But the continuing rain and overstretched resources have kept them away.

“We keep on digging anywhere where there is a smell,” said Mpume Buthelezi, who lives in Nthungwane Extension 5. Members of the community dug into the heavy compacted mud that now covers the spot where Bulelani Ngaleka’s house once stood. Hole after hole.

Last Monday, floodwaters smashed into the settlement that lies not far from Ntuzuma, near Durban. The flood destroyed Ngaleka’s home, sweeping away his mother, Nkosazane, and his two children, Sikelelwe (10) and Yamkela. Ngaleka, a security guard, was last seen holding on to a piece of piping.

Another casualty that night was Nokulunga Makhoba. Her home was closest to the Nthungwane River and her neighbours told how after saving her two children, she returned to her home to collect clothes. She wasn’t seen again.

“We have been flooded with requests alerting us to where missing people are,” said Imtiaz Sooliman, the founder of Gift of the Givers. “There are messages of 20 people missing from one area, a family of five from another area, two children from a house. The death toll is going to pass 600, comfortably.”

His organisation has been working with the police and KwaZulu-Natal disaster management, providing equipment and helicopters.

“Today [Monday] we were searching for a three-year-old child in Hillcrest… the rain messes up the search and we have to stop. The second thing is the mountains and mountains of mud. Equipment doesn’t work and you can’t get bigger equipment in because the access roads are difficult,” said Sooliman.

The search has become a body recovery operation, with the death toll standing at 443 on Monday evening.

Communities are still without water and electricity. Many have to rely on water tankers provided by the municipality. Residents have to queue and tempers flare and tensions spill over.

“There have been instances where they have attacked [water tanker] drivers,” said Jordan Reddy, a member of the KZN VIP Protection Services’ tactical reaction team, which has been tasked with protecting the water tankers.

Jose Ramos was standing in a queue in Montclair, in Durban, when he was turned away after a tanker ran dry. Resigned, he looked to the sky.

“I am hoping I will be able to collect rainwater later,” he said.

Supermarkets are rationing bottled water, and petrol stations are limiting motorists to R400 of fuel, but many stations don’t have any fuel.

Still, here and there, there were signs of Easter being celebrated.

On Florida Road in Morningside, Durban, the peal of the bells of the Catholic Parish of St Joseph called the faithful to Mass on Saturday evening.

A few strolled the street deciding on a restaurant to eat in. But reminders of the disaster were never far away.

People walking on the beach snapped cellphone pictures of the mountains of debris that had washed up. On OR Tambo Parade, on the Durban beachfront, scores of SAPS Public Order Policing vehicles from around the country had gathered by Saturday evening.

It is all part of a national mobilisation of SANDF members, firefighters and other rescue personnel who have been tasked to deal with one of South Africa’s worst national disasters.

But in this mix were not just the professionals – stories are emerging of ordinary citizens who have put their lives on the line to help their communities. One of them was Theesan Francis, from Umgeni Park.

During the July unrest, the community banded together to protect shops in their area from looters.

They came together again hours after the floods hit. With other community members, Francis assisted in recovering a body found in the Umgeni River, after they got permission to do so from the SAPS.

They discovered that the victim probably hadn’t drowned but had been murdered. There were two stab wounds to the chest.

They helped with another body recovery, of a man who had been asleep in a container when it got buried in a landslide. They had to use earthmoving equipment to dig him out.

As roads are repaired and the floodwaters subside, others are tallying the cost of the disaster.

Vanessa Pillay is hoping to drive on Tuesday to the Females Rising through Education, Support, and Health clinic in Umlazi, an HIV-prevention programme that provides support and research. Over the last week they have had to pick their way across sewer pipes after the road collapsed.

The clinic conducts trials on HIV infection and immune response. Blood samples are taken and stored. The concern is that nine months of trials have been compromised as participants can’t come to the clinic.

“Possibly it will mean going back to square one or we will have to scrap the research and carry on with the rest of the studies that we’re doing,” said Pillay, who is the programme manager.

At Nthungwane Extension 5 the community is slowly getting help. The government and several NGOs have been providing food and clothing.

But Buthelezi is worried for Makhoba’s two surviving children.

“They are doing well, but first of all they need counselling,” she said. DM