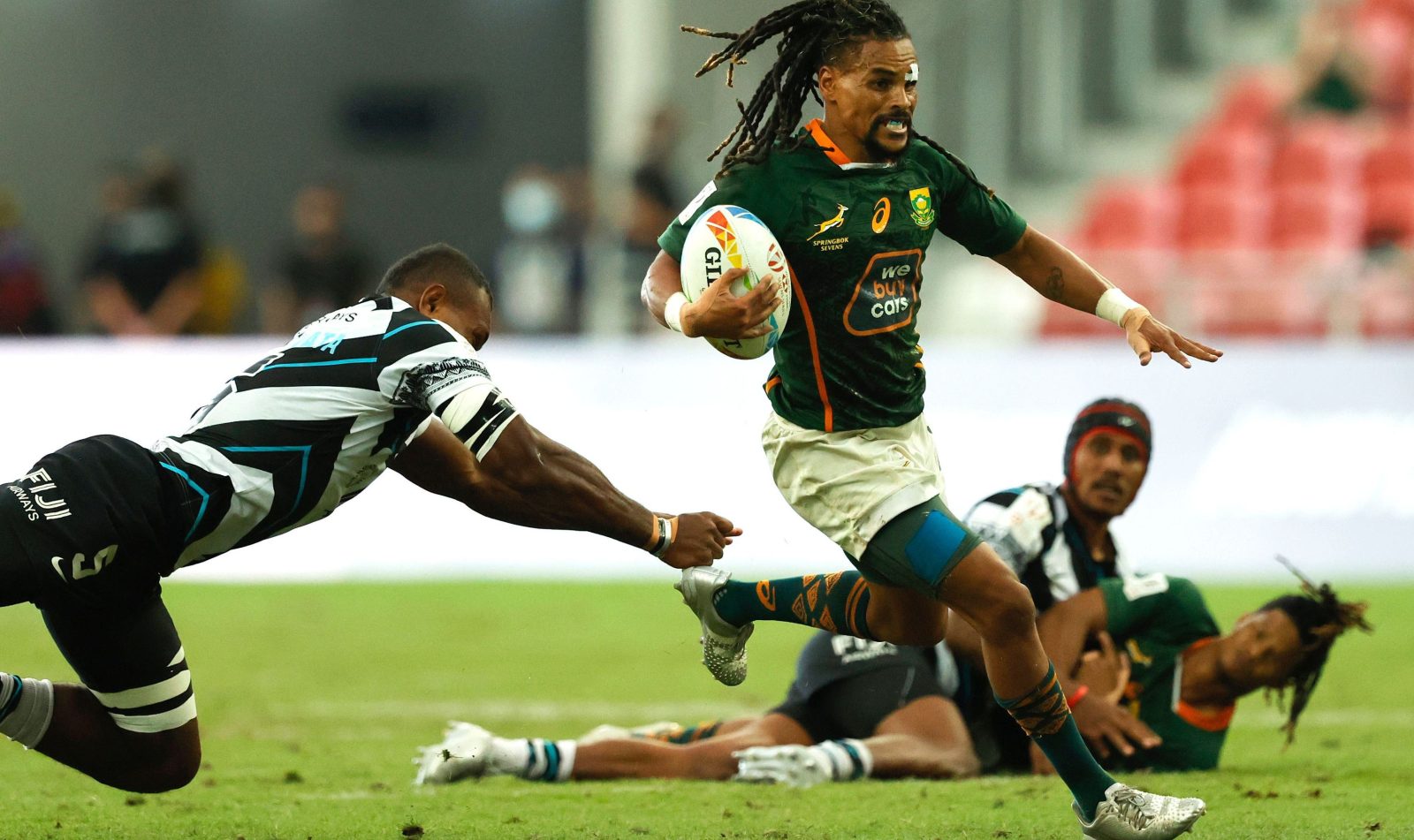 South Africa's Selvyn Davids on he run against the Fiji defence on day two of the HSBC Singapore Sevens on 10 April 2022. (Photo: Mike Lee-KLC fotos for World Rugby / BackpagePix)

“Those defeats were very disappointing and it is tough to digest,” said Blitzboks coach Neil Powell of the consecutive defeats to USA, Fiji and Argentina, respectively.

The defeat to USA broke the Springbok sevens team’s 36-match win streak, a record that has only been bettered once before. The record of 47 consecutive victories is held by New Zealand’s sevens team, who claimed the accomplishment in the 2007-2008 series.

It was the Blitzboks who cut the record at 47 matches when they defeated the All Black sevens team 15-7 in the final of the Adelaide Sevens in 2008.

New Zealand dominated the sevens circuit in its formative years, winning seven of the first eight series titles. In all eight of those developmental years, the Blitzboks best result came in the 2001-2002 series, when they were runners-up.

Since 2008, the Springbok sevens team has made major strides, either winning or being runners-up in 11 of the 14 series since.

A big reason the Blitzboks’ fortunes changed so significantly is because of a culture change brought about through SA Rugby’s high-performance programme, which was implemented in 2013 by former Blitzboks captain and current high-performance manager Marius Schoeman.

“Culture determines who gets signed to our academy and, indeed, who goes on to play for the Blitzboks. Discipline, respect, humility, work ethic – those are the pillars of our system. If I find a talented player [who] doesn’t share those values, I won’t bring him into the system,” said Schoeman.

These pillars have built the platform of success the team is currently enjoying. “The whole system is built around the idea of a collective,” said Schoeman.

The Blitzboks veered away from this strategy last weekend – and paid the price on three occasions: “We played too much as individuals and too little as a team,” said Powell. “Our strength lies in our ability to play as a unit and follow our principles and protocols, and we did not see enough of that this weekend.”

“We did not perform as a team,” agreed captain Shakes Soyizwapi.

The Blitzboks remain favourites for the 2021/22 World Sevens Series title. After five tournaments, the Boks sit on 98 points, having won four of the five tournaments, 15 points ahead of Australia and Argentina, who are tied on 83 points, in second and third. With four tournaments left, the series is the Blitzboks’ to lose.

It is a busy year in the sevens calendar with the Commonwealth Games, hosted in Birmingham in July and August, and the Sevens World Cup in Cape Town in September this year.

“This was a good wake-up call for us as the Rugby World Cup Sevens comes closer.

“We cannot think that we just have to pitch up to win. We will have to rectify that,” Powell said.

There is a popular saying in sports circles that “hard work beats talent when talent doesn’t work hard”. Instead, the Blitzboks have asked – and answered – the question, “What if talent works hard?”

The Springbok sevens team has never lacked talent. That has been evident in their exciting playing style since the start of the sevens circuit. But since the implementation of the work-ethic pillar, the Blitzboks have taken their game to another level. The Boks often have a high penalty count because of their style of play — trying to jackal the ball on the ground to unleash their potent counterattack. Unfortunately for the team, it mostly backfired in Singapore.

“We will have to sit down and analyse why that happened. The number of penalties conceded were too many, especially in our last two games, and we need to improve in that area,” Powell said.

Those high-risk, high-reward plays, however, have more often than not been successful in the past with the Boks trusting their defence when things go wrong.

“The decision-making, especially around the ruck, is so important. We prefer to compete and win the turnover in order to run at an unstructured opposition defence.

“X-factor players such as Selwyn Davids and Ronald Brown are so good in those situations,” said Powell.

The reason the Blitzboks have succeeded in their risky manner of play is because of their trust in one another and their determination and hard work off the ball.

“We have a saying in our team: ‘The opposition can beat the individual but not the system.’ Your system accounts for the one-on-one missed tackle,” said Powell. “It also becomes a mindset when you strive to keep the opposition tryless.”

The Blitzboks have no real stars in their rank, despite their substantial lead in the series’ standings; instead, they rely on the other six players on the field to ensure the team achieve their goals.

“Whether you start the match or come off the bench, your responsibility remains the same: you need to make sure you put your teammate in a better position and you make sure you have his back,” said playmaker Dewald Human. “For us as Blitzboks, we enjoy playing for each other, so it is an easy motivation for every match.”

The Blitzboks have started this year brightly and if they manage to find similar form from the first four tournaments of the World Series, they will end the season with many spoils of battle. DM168 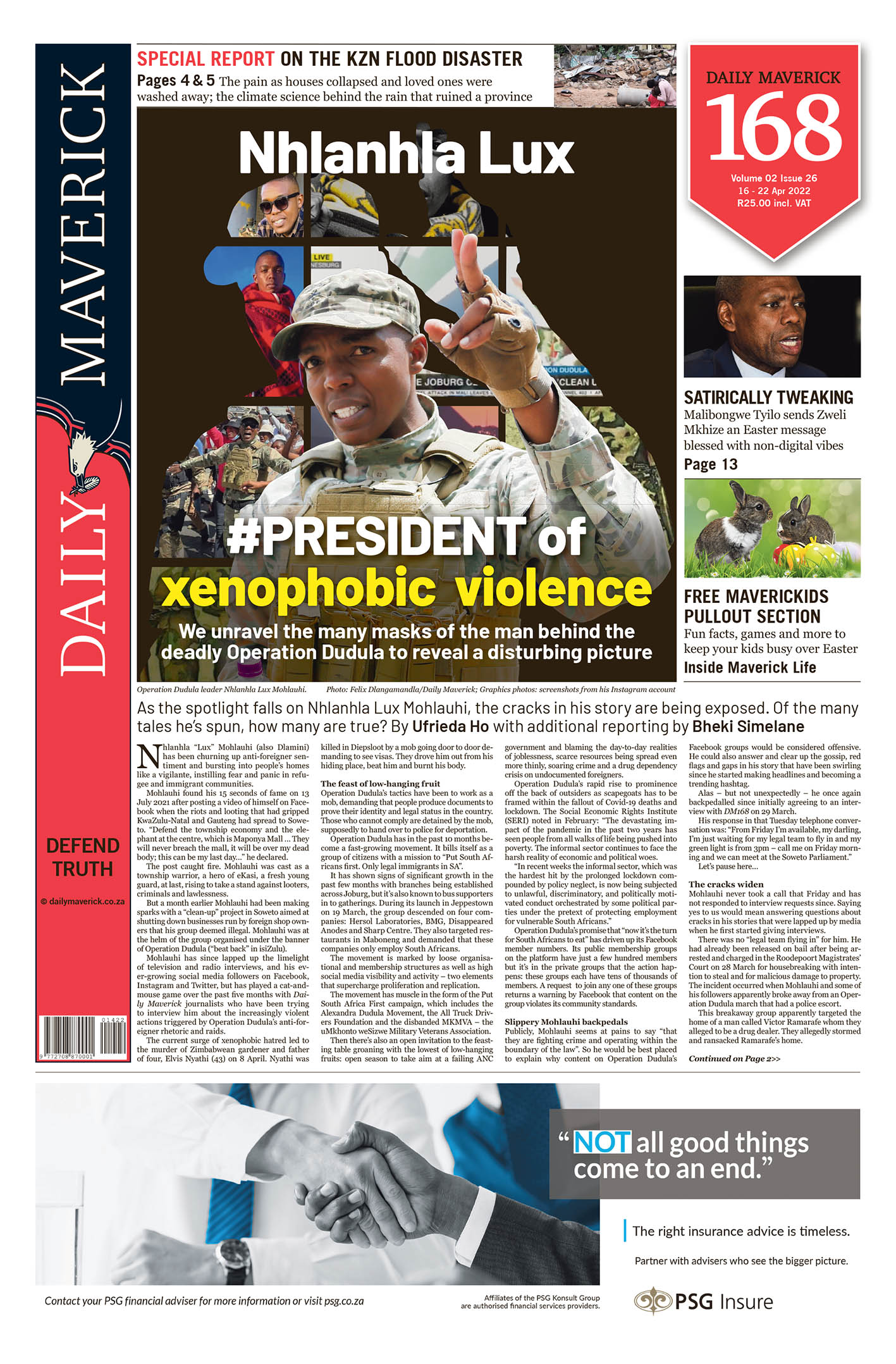