OUT FOR THE COUNT

SA’s Census 2022: 68% of Daily Maverick reader survey respondents are yet to be contacted 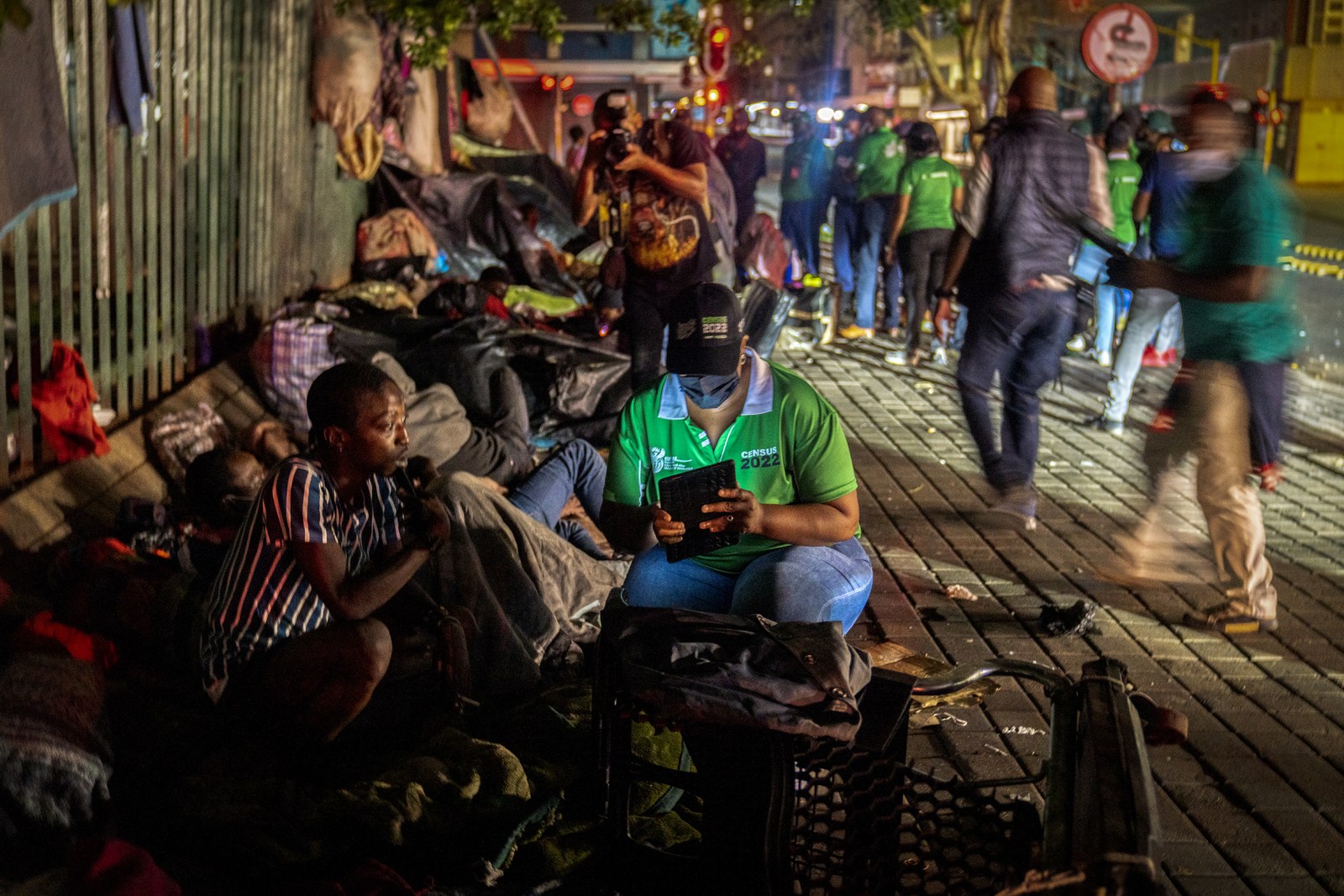 A field agent conducts a census on the homeless in the Johannesburg CBD on 2 February 2022. (Photo: Shiraaz Mohamed)

The Census 2022 count was supposed to officially finish ahead of the Easter weekend – but with a Daily Maverick survey indicating that more than 68% of respondents have yet to be contacted by any Census 2022 workers, Stats SA acknowledges that there have been major glitches. Data collection in the Western Cape is described as ‘a disaster’.

A day ahead of what was supposed to be the official end of counting for South Africa’s Census 2022, a Daily Maverick survey has revealed that just over 68% of respondents have yet to be contacted by Census 2022 workers in any way.

Of 458 Daily Maverick readers responding to a Hearken survey, only 143 (31%) had received a visit from census enumerators. The remaining 315 (68%) had not had any contact from representatives of the population count run by Stats SA.

“Not one single soul I know in the Mpumalanga Lowveld… has mentioned being visited by census officials,” wrote one respondent.

“The 350 people in the senior living community where I am have not been contacted,” wrote another.

Other respondents indicated that they had received some form of communication from Census 2022 workers which was then never followed up.

“Got a message from someone saying they would be coming at 10h00 one Sunday morning to do the census. Waited in all day and no one pitched up,” noted one respondent.

When Daily Maverick contacted Census 2022 spokesperson Trevor Oosterwyk to ask if these responses should be viewed as cause for concern, he acknowledged that by this stage, “we would have hoped we were much further down [the road] to completion”.

It had been hoped that the “main phase” of data collection for Census 2022 would be completed by Sunday, 20 March, but Oosterwyk concedes that there is still major work to be done in KwaZulu-Natal, Gauteng and the Western Cape in particular.

“The Western Cape is a disaster,” Oosterwyk said candidly, with only 50% of households in the province counted to date. The census has now been extended until the end of April in the Western Cape.

Counting has gone more smoothly in the smaller provinces, with work concluded in Limpopo last week and finishing in Mpumalanga and North West this week.

It may seem counterintuitive that in a country with South Africa’s unemployment statistics, Stats SA has struggled to find people to do the counting work. But Oosterwyk says that although a million people indicated their desire to work on the census, most were found to be ineligible for various reasons.

In the Western Cape, Oosterwyk says people could not be found to work in “difficult areas”, including the Cape Flats. As a result, enumerators have had to be bussed in from other provinces, with 600 workers sent from Limpopo.

Early reports of census workers not being paid may also have disincentivised applicants. Oosterwyk explains that the workers had to be paid through the government payment system, which is “not as agile as we would have hoped”, and there were further challenges posed by workers submitting incorrect details.

When it came to technology, Census 2022 was the first South African census to make use of a digital questionnaire.

“We thought the new tech would make it easier, but it also adds to your burdens,” says Oosterwyk.

IT hiccups were particularly acute in the first period of counting, where thousands of people working on the same online system simultaneously led to drags in the system.

The logistical issues faced by Census 2022 have included some expected problems – involving crime and the effects of Covid-19, for instance – and other unpredictable roadblocks, such as the current flooding in KwaZulu-Natal which has meant counting has had to be suspended for the time being.

Census 2022 is the fourth South African population count conducted in the democratic era, with the previous incarnations taking place in 1996, 2001 and 2011. The importance of the census producing accurate results cannot be understated. Stats SA says that the figures will become “the basis for budget allocations across local, provincial and national government” – meaning that an undercount could have catastrophic results for government planning and service delivery.

Oosterwyk says that the question of how accurate the results of Census 2022 will ultimately be is one for Stats SA’s methodologists to pronounce on down the line. Once counting is deemed to be complete, a post-enumeration survey takes place across the country in selected areas to measure the accuracy and reach of the census.

One glimmer of light from Daily Maverick’s reader survey was found in the fact that the majority of respondents – 89% – were aware that Census 2022 was currently under way, suggesting that the communications programmes around the count have been more effective than the actual counting.

As early as late February 2022, there were already concerns being raised from the public about various aspects of the Census 2022 processes.

In a statement at the time, the chairperson of the Statistics Council, Professor David Everatt, and the Statistician-General, Risenga Maluleke, appealed to the public: “Let everyone who is within the borders of South Africa exercise their right and moral duty to raise your hand and be counted.”

There has been no indication to date, however, that the Census 2022 problems can be attributed to a lack of public willingness to be counted. DM