Explainer: Why KZN was flooded and why it’s likely to happen again 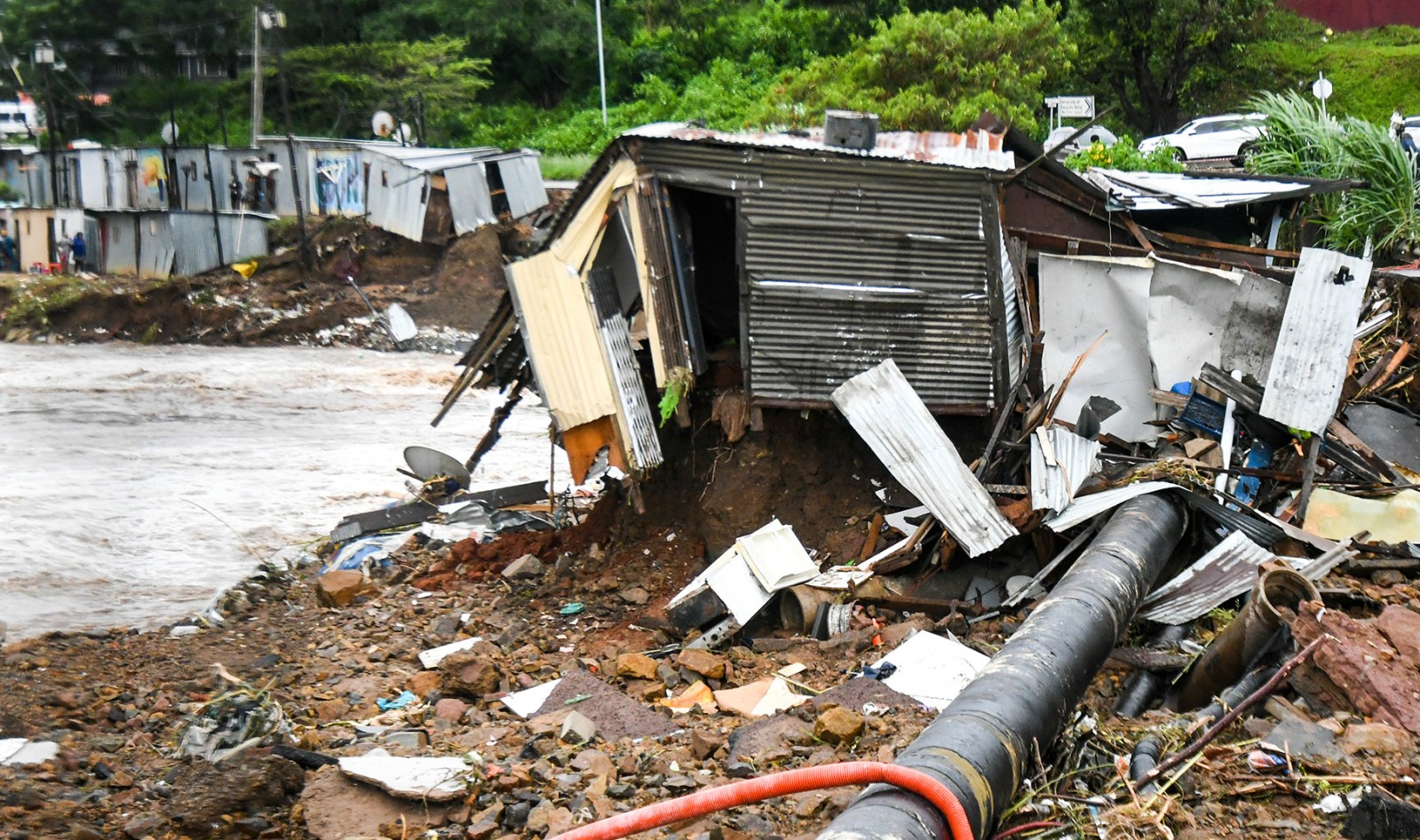 Shacks washed away at the informal settlement between M19 and Quarry road on April 12, 2022 in Durban, South Africa. (Photo by Gallo Images/Darren Stewart)

The devastating floods in KwaZulu-Natal have brought into sharp focus the material threat posed by extreme weather and climate change. Weather forecasters and climate scientists have told Our Burning Planet that these sorts of events are likely to happen again – and potentially sooner than you might expect.

That’s how President Cyril Ramaphosa described the flooding in KwaZulu-Natal and the resultant destruction of lives and property. With a death toll that has reached at least 306 and an economic cost yet to be tallied, it followed that the flooding and landslides was declared a provincial disaster and gazetted as such by Dr Mmaphaka Tau, head of the National Disaster Centre.

The events of the past week in KwaZulu-Natal have brought into sharp focus the material threat posed by extreme weather and climate change. Forecasters from the South African Weather Service (SAWS) have noted that much of the rainfall was “record-breaking”, even going as far as to acknowledge in a statement on Tuesday that “the exceptionally heavy rainfall overnight and this morning exceeded even the expectations of the southern African meteorological community at large”.

Weather forecasters and climate scientists – who focus on meteorological conditions across different timescales – answered some of Our Burning Planet’s questions. The consensus seemed to be that these sorts of events are likely to happen again – and potentially sooner than one might expect.

So what caused the heavy rains that led to the floods and landslides?

🤯 CUT-OFF LOW RESPONSIBLE FOR #KZNFLOODING HAS DEVELOPED INTO SUBTROPICAL DEPRESSION ISSA, WITH CENTRE OFF THE COAST OF MARGATE, PACKING 95KM/H GUSTS!!! RARE FOR SUCH SYSTEM TO FORM MORE THAN 30 DEGREES FROM EQUATOR!!! pic.twitter.com/8lYj2tFug6

Kumsa Masizana, a forecaster at the South African Weather Service (SAWS) told Our Burning Planet that last Friday South Africa had a weather system which referred to as a “cutoff low system” – a very intense low-pressure system that develops in the upper air and extends all the way down to the surface.

“This system is well-known for bringing some significant rainfall across the country and it results in a drop in temperatures. So it’s a very slow-moving system that started on Friday, that started affecting the central and eastern parts of South Africa. As the system started moving eastward, moving over the country, it went over to KwaZulu-Natal where it exited the country and then formed a low-pressure system… a subtropical depression”.

Masizana said that “the low-pressure system was situated just off the coast of KwaZulu-Natal which is still feeding in a lot of moisture along the coastal areas of KwaZulu-Natal into the adjacent interior also spreading into the Wild Coast of the Eastern Cape which is a result of all of that flooding. It persisted for about two to three days and some areas got some significant rainfall, areas such as Virginia – got over 300 millimetres of rain [over 24 hours]. That system only died down on Tuesday”.

Asked if we should expect more heavy rain over the weekend, Masizana said: “Yes, there is another cutoff low system that is currently developing. It’s going to start bringing in some rainfall tomorrow, which is Friday, where the rainfall will be concentrated once again over the central and the eastern parts of the country but the most significant day will be on Saturday when we are expecting 80% which is widespread showers across Gauteng, the North West, eastern Free State as well as KwaZulu-Natal once again.”

In reference to the rains that caused such havoc in KwaZulu-Natal, she said “the grounds are still very much saturated so anything above 10 to 15 millimetres is enough to cause some flooding once again over KwaZulu-Natal. So for this type of system we are expecting 30 to 40 millimetres of rain which can lead to localised flooding in those areas so we will monitor that area, possibly even sending out a warning closer to the date to those areas of KZN.”

Asked whether claims on social media that the rains were the result of a cyclone, Masizana stressed that this was not a tropical cyclone and had nothing to do with Cyclone Issa, the ninth cyclone of the southwest Indian Ocean cyclone season. “This is its own system.”

His research focuses on climate change detection, processes, scenarios, impacts and adaptation. He confirmed much of what Masizana said, saying among others that a quick look at the weather charts provided by SAWS shows there is a coastal low-pressure system sitting adjacent to the KZN coast, which acts to draw in moist ocean air into the interior”.

He explained, however, that rainfall alone doesn’t explain the totality of the disaster.

“The flooding itself is often exacerbated in urban areas, where hard surfaces [such as] roads, roofs, driveways, etc, prevent the rain from soaking into the ground, and it is channelled into storm water drains, which are then overwhelmed, burst, overflow, or channel all the water into rivers which themselves then overflow. Quite a bit of damage shown in pictures in the news seems to be from collapsed and washed away stormwater infrastructure.”

New added, “The damage to land in some lower-income areas and informal settlements is at least partly due to these settlements being established in flood-prone areas or on hillslopes that are steep – because these more dangerous settings are all that is available… so, the impacts of any flooding event will very often be greater here; people are more exposed, and their homes, roads, and other facilities are not as robust”.

Ziervogel’s research focuses on climate change adaptation and development at household and municipal levels. Ziervogel concurred with New’s assessment saying that “this event does highlight how high levels of poverty in our country undermine the ability to withstand climate shocks. For example, housing is poorly built and so easily destroyed. Parents have to work and leave children unattended who are then more vulnerable to these shocks.

Asked about what role climate change played in the flooding, if at all, New explained that “heavy rainfall events have occurred many times in the past and will do so in the future. But global warming due to human influence on the climate makes the weather more energetic: on average it increases the amount of moisture in the atmosphere when rain-producing weather systems are present, and the warmer atmosphere also increases the energy of the convective systems [thunderstorms] producing rainfall. So more frequent and more intense rainfall is totally consistent with what we expect as global warming progresses.” OBP/DM

Explainer: Why KZN was flooded and why it’s likely to happen again