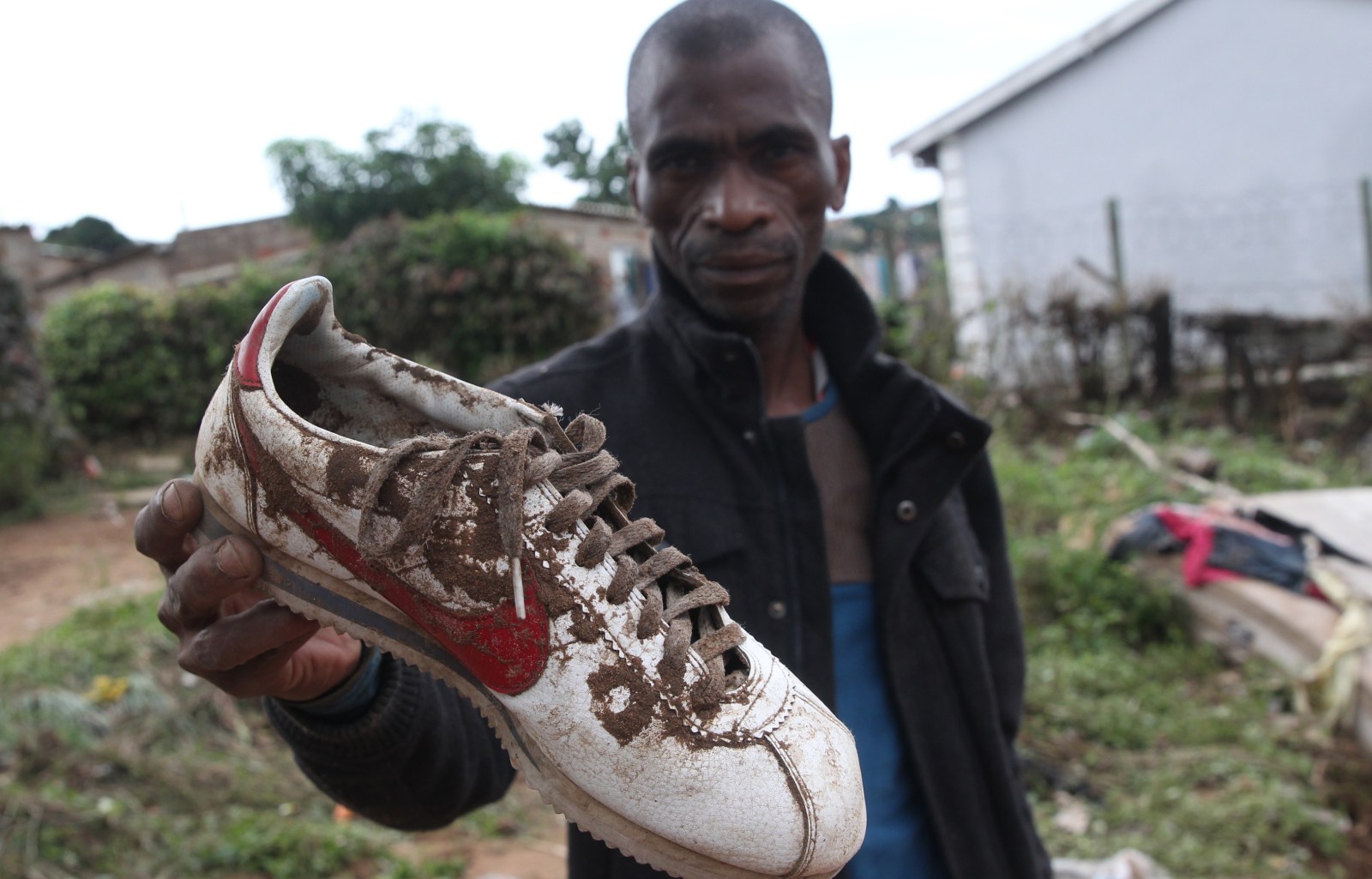 David Teka shows a shoe belonging to his friend Bulelani Ngaleka after he was swept away by floodwaters. Ngaleka and his mother, Nkosazane, and his two children, Sikelelwe (10) and Yamkela (11), are still missing. (Photo: Mandla Langa)

As the floodwaters slowly recede, the dead are being found. They are grandmothers, swept away while clutching a grandchild, and mothers who risked all to provide for their children.

A white sneaker is all that was found of Bulelani Ngaleka. David Teka held it in his hand, as he looked at where his friend’s house used to stand, under a willow tree. Now there is rubble and four missing people.

When members of the community last saw Ngaleka, he was desperately holding on to a piece of piping just after the floodwater rolled over the road and smashed into Nthungwane Extension 5 at 11pm on Monday. Ngaleka’s mother, Nkosazane, and his two children, Sikelelwe (10) and Yamkela (11), were also swept away.

The family of four were not the only dead that night. Nokulunga Makhoba’s home was closest to the Nthungwane River. She had time to save her two children and hand them to a friend. Then she went back to collect some clothes. Makhoba wasn’t seen again.

The torrent of floodwater had also taken out the bridge, sweeping away cars and a large container. First to go was the electricity, which meant the residents of Nthungwane Extension 5 had to scramble in the dark trying to save their belongings. They feared more water would come.

“When it came, it sounded like the ocean,” recalled Teka.

Two days later and the community is searching along the Nthungwane River for the five missing people. They say they have had no help from the rescue services. On Wednesday morning, paramedics arrived and provided medical care to some of the injured. Then they left.

“Down the river, there is a terrible smell. We think there might be a body there,” said Teka, adding that no officials would come out to help them.

Across Durban and the surrounding areas affected by the flood, other communities were also searching for the missing as it became apparent that the chances of finding them alive had now become remote.

By Wednesday night, the body count for one of the worst flood disasters in South Africa’s history stood at 306.

The South African Weather Service has warned of more rains coming and a wet Easter. In some areas, floodwaters had yet to subside, leaving places like Amanzimtoti and Umlazi cut off.

The eThekwini Municipality said on Wednesday that it could take a week before electricity and water are fully restored. Cellphone connectivity also remains patchy.

But as many gave worrying glances to the skies and noted the light rain that was falling, the clean-up has already begun.

The empty containers, weighing tonnes, had floated on to the highway, where the water for a time was as deep as 2.5m. They flattened traffic lights and bent road barriers in their path.

To recover these containers, the team had to use a heavy lifting crane.

“We recovered about 13 today and we still have over 40 to go. It is not easy. Some are on their sides,” said Singh.

It is hard, time-consuming work. Even ordinary citizens could be seen shovelling mud off the roads. In one incident, close to Zimbali Lodge, near Ballito, a group of citizens threatened and tried to stop a Public Works Department truck that was driving by.

“You must stop and do this,” one of them shouted. The truck drove on.

Concerns are growing about those rendered homeless by the floods. On Wednesday, councillor Thamsanqa Ntuli, speaking on behalf of the Executive Committee of the South African Local Government Association, called on all municipalities affected by the floods to make available community halls as temporary shelters.

In  Nthungwane Extension 5, at least 33 homes were destroyed. There is a community hall in the area, but residents believe it is not adequate. A nearby abandoned chicken farm, they believe, would be better suited.

Many in the community were still wearing the clothes they had on when the flood hit. But on Wednesday, the priority was finding the missing.

As the floodwaters slowly recede, the dead are being found. They are grandmothers, swept away while clutching a grandchild, and mothers like Makhoba who risked all to provide for their children.

Where Ngaleka’s house once stood, a group of women held on to each other in a circle and cried. Nearby, the search for the dead of Nthungwane Extension 5 continued.

“The problem is that they could be a long way away by now, down the river,” said Ndebele. DM