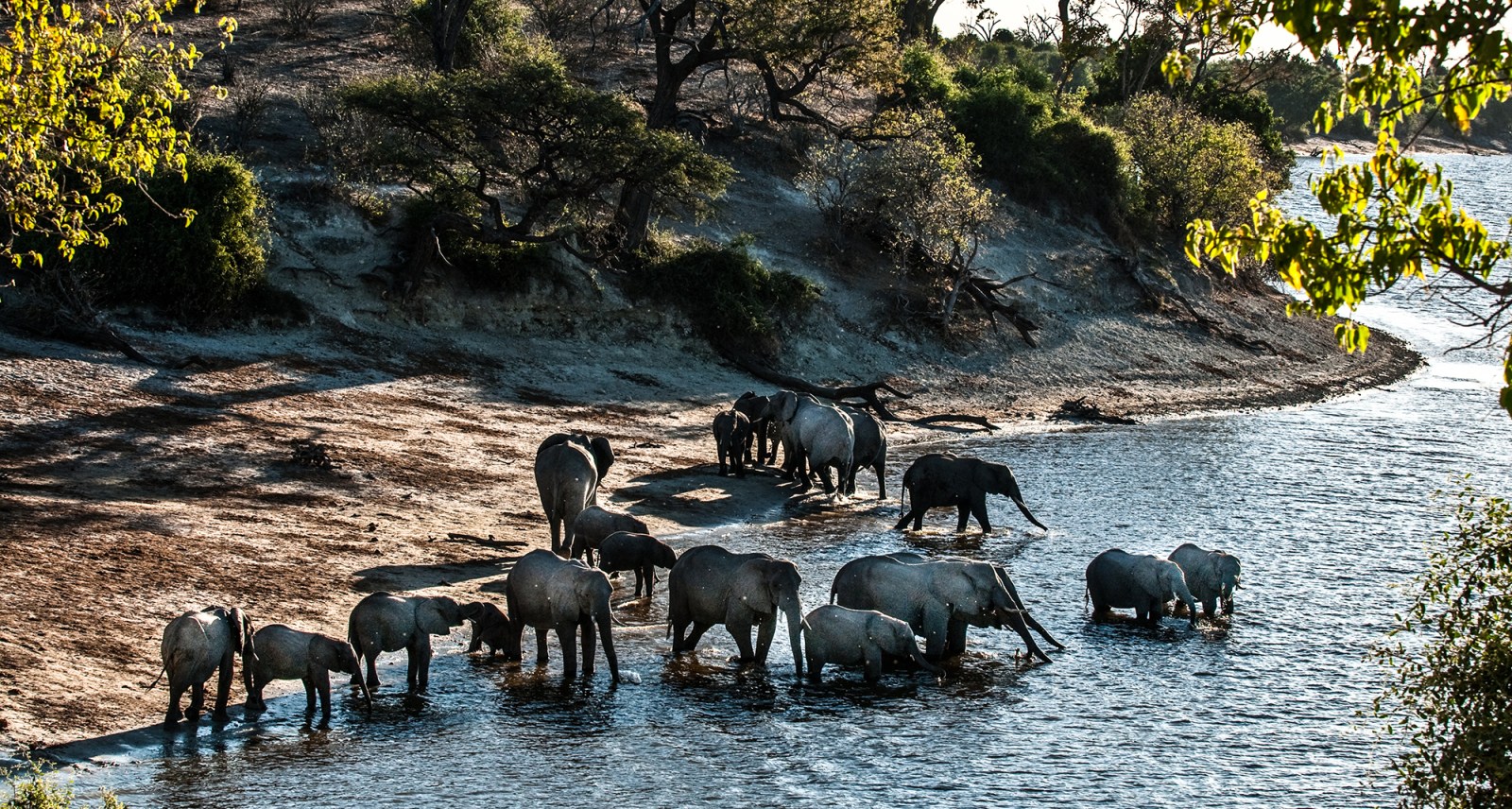 Chobe National Park’s goose that lays the golden egg of Botswana tourism is under threat of being killed by eight 75-bed lodges planned for its prime riverfront. If it goes ahead, wildlife people pay to see will most likely have fled.

After entering Chobe National Park from nearby Kasane, you’re soon in one of the most iconic places in Africa — a wide, lazy river lined by classic savanna woodland. Towards evening, the elephants arrive without fail, sometimes hundreds at a time, to drink and frolic in the cool water. It’s a 50km wildlife corridor of viewing bliss.

On those very banks, Botswana’s Ministry of Environment, Natural Resources Conservation and Tourism has invited citizen-owned companies and consortiums to submit “expressions of interest” to lease eight lodge sites of three hectares spaced two kilometres apart. Each could cram about 600 tourists and supporting staff — and add an estimated 70 game drive vehicles — into the park. At the moment, movement within the park is strictly prohibited after 6pm.

The move is being hotly contested by local residents, both because of its impact on the pristine area and because it appears to be fraught with illegalities. Opposition MPs have also raised objections in parliament. At this stage, the ministry appears unmoved and has not replied to questions.

A group named Concerned Stakeholders Chobe District, consisting of tourism groups and NGOs, has filed a Letter of Objection to the government, saying the move is a threat to both wildlife and the tourism industry.

“Wildlife corridors will be impinged on and human-wildlife conflict will increase,” it said, “necessitating mitigations like fences.” This would lead to dangerous encounters in an area already under severe crowding pressure.

“The impact of increasing an already high traffic volume by an estimated minimum of 70 game viewing vehicles will be devastating to the quality of the tourist experience and will certainly change wildlife behaviour and distribution.

“It is our opinion that no amount of mitigating measures can be undertaken to offset the disastrous impact that ONE riverfront lodge would have, let alone EIGHT!”

It questioned whether a 75-bed lodge could be built on the three hectares allocated.

“Any entity that has built a lodge in a wildlife area will attest to the amount of space required to develop the establishment. Workshops, solar farms, staff quarters, wastewater plants and miscellaneous support infrastructure consumes a lot more space than tourist communal areas. Three hectares (30,000m²) is ridiculously insufficient.”

These lodges, it says in the letter, would create long-term, perhaps irrevocable, damage to a sensitive ecosystem, with impacts including deforestation, pollution, erosion and road degradation, as well as detrimental impacts on wildlife.

The proposal was “flashed” up on the government website and quickly removed.

“The rushed time frame offered on that brief public notification to participate in the EOI [Expression of Interest],” states the Letter of Objection, “was unrealistic and provides ample speculation as to the legality and inclusiveness of the process.

“It begs the question: had select participants already been established/offered the chance to tender before the all-too-brief public notice was made?”

A letter of objection was also sent to the government by the Botswana Hospitality and Tourism Association.

Neither Concerned Stakeholders nor Botswana Hospitality have received a government response to their letters, or invitations for discussion and clarification.

Even the local Chobe offices of the Department of Environment and the Botswana Tourism Organisation were unaware of the “expression of interest” until approached by Concerned Stakeholders.

When challenged in parliament about the Chobe move, Speaker Phandu Skelemani claimed it was in line with the USAID-funded 2020 Management Plan. The consultants who drew up the plan dispute this and say it may have been illegally altered after being signed.

According to Africa Geographic, consultant Lin Cassidy requested that the names of her team be removed from the latest approved plans, saying “we have learned that versions of [these] management plans… that we submitted to the Department of Wildlife and National Parks (DWNP) and which were accepted and approved by DWNP may have been changed since our submission and completion of our contract”.

The government, however, denied that any objections had been received by the consultants, despite their letter being publicly shared.

Speaking in parliament, Minister of Wildlife and Tourism, Philda Kereng, said her ministry was allocating the Chobe sites without requiring environmental impact assessments “with the aim to fast-track initiatives geared towards allocation of land in Botswana and ultimately ensuring that Batswana have access to land.

“We want to increase the participation of Batswana in tourism, such as in Chobe National Park, where we are opening concessions or space for them to get into,” she said.

However, Eco Tours director Othusitse Ranko said it seemed that only companies which are operational and own a tourism-related business are favoured or afforded an opportunity to express their interests in the sites. They would also need to show proof that they already have the funding available. To build a new lodge costs millions of pula, something only the biggest companies could afford.

In a complaint filed with the ministry, Ranko said it was “our considered view that the above is discriminating to individuals and companies, especially the youth who haven’t had an opportunity before to own and operate tourism-related facilities and who by default won’t have the required tourism licence”.

Apparently, opening up pristine parks to concessionaires will not be confined to Chobe. In parliament, Minister Kereng said the Chobe call for expressions of interest was part of a range of initiatives by the government to empower citizens to enter the tourism industry. She said 41 tourism concessions were being set aside in Kasane and Kazungula.

“Similar plans will take place in the Okavango Delta, the Central Kalahari Game Reserve, Kgalagadi Transfrontier Park and other national parks, and we will be running these programmes at the same time to help increase citizen participation.”

Since coming to power in 2018, the government of President Mokgweetsi Masisi has been constantly accused of using the country’s famous wildlife to buy votes.

Trophy hunting, banned under the previous administration, was opened to foreign hunters (part of Masisi’s election media campaign was funded by US hunting associations). Even one of the most important transboundary wildlife corridors used by migrating elephants dispersing into Namibia, Angola and Zambia (NG13) is now a hunting concession. A huge migrating bull was shot there this month by a trophy hunter.

It was also recently announced that the government would provide “start-up” wildlife stock to encourage locals’ participation in agro-tourism and wildlife farming. However, fencing and feeding wildlife in limited areas on Botswana’s dry terrain would be way beyond the means of any citizen smallholder, so the benefit would go to large landowners only.

With the country clawing its way out of the pandemic sinkhole, moves that downgrade wilderness in favour of votes have the potential to harm an already stressed tourism product.