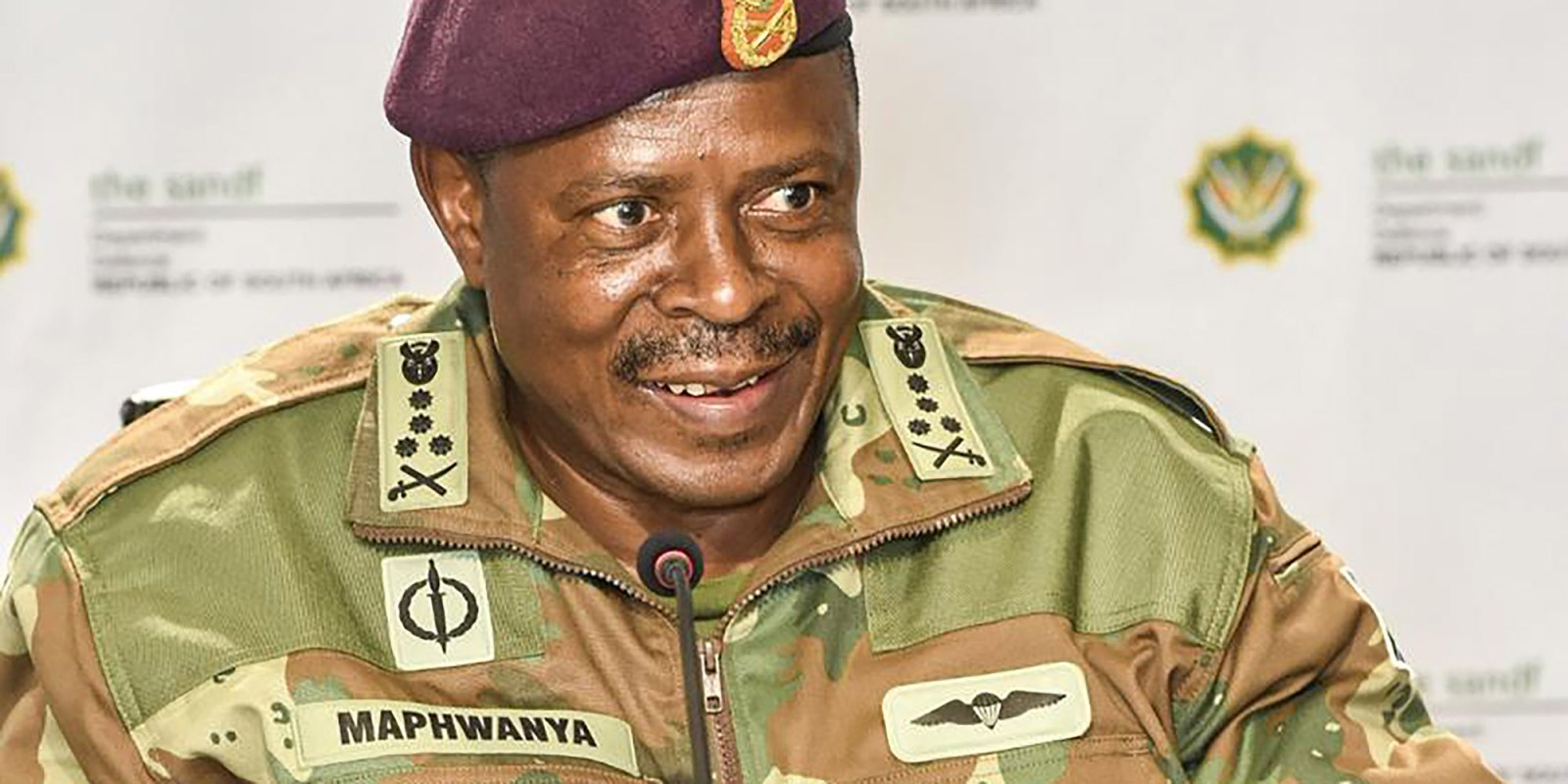 ‘Our forces continue to inflict massive losses to the terrorists as we speak,’ said General Rudzani Maphwanya.

The regional intervention force Samim is inflicting “massive losses” on Islamist insurgents in northern Mozambique, enabling locals to start returning to their normal lives, according to South Africa’s top general.

The chief of the SA National Defence Force (SANDF), General Rudzani Maphwanya, attributes much of this success to Samim overcoming initial coordination problems so that it is now working smoothly with the military forces of Mozambique and Rwanda.

This greater coordination contributed to the success of the joint Operation Buffalo between October and January, which led to the killing of 31 insurgents and the destruction of many of their bases in the Macomia district of Mozambique’s northernmost province, Cabo Delgado.

The operation also enabled the rescue of 16 women, eight children and two elderly men who had been abducted by the insurgents, and the seizing of many weapons, Maphwanya told journalists at a media briefing in Pretoria on Wednesday.

However, it was also during Operation Buffalo that Corporal Tebogo Hadebe, a member of the SANDF Special Forces Regiment, was killed in action, he said.

“Our forces continue to inflict massive losses to the terrorists as we speak,” Maphwanya said.

This week President Cyril Ramaphosa chaired a virtual summit of the troika of the security organ of the Southern African Development Community (SADC) which approved the extension of Samim — the SADC Mission in Mozambique — for a further three months until July 15.

Its mission was to defeat the Islamic State-affiliated insurgents of Al-Sunna wa Jama’ah (ASWJ) — known locally as Al-Shabaab —which has been terrorising Cabo Delgado since October 2017.

But SADC was publicly annoyed that after trying for many months to persuade Mozambican President Filipe Nyusi to authorise the deployment of Samim, he allowed a Rwandan intervention force to go into Cabo Delgado just before Samim and steal its glory.

Maphwanya acknowledged in Wednesday’s media briefing that the initial lack of full coordination and communication between Samim and the Rwanda Defence Force had created problems. He referred to the occasional slow response of Samim to ASWJ attacks on civilians or the unpreparedness of Samim to respond to ASWJ insurgents fleeing a Rwandan attack which Samim had not been informed about.

But he said that on one of his several visits to Cabo Delgado he had met the head of the Rwandan intervention force based in Mocimboa da Praia and the two generals had agreed they had “the sole mission of ridding Cabo Delgado of the scourge of terrorism” and so should work together.

The first success of this new synergy was Operation Buffalo, an integrated operation involving forces of Samim, Rwanda and Mozambique, he said.

Samim was also “making strides in our efforts to win the hearts and minds of these locals in Mozambique because we are there purely for their interest”, he added.

“Samim forces are well received by locals and have embarked on limited humanitarian efforts as well as civil-military cooperation.” This helped the locals and Samim by improving relations with them.

Samim had donated Christmas hampers, equipment and supplies to a local hospital. It was also treating civilians in its field hospital and clinics.

By recapturing villages from insurgents, dislodging them from their bases and seizing weapons and ammunition, Samim had brought back relative stability and security so that people were feeling safe enough to return to their homes.

How many have returned though is not clear. The insurgency has displaced hundreds of thousands of people over the past few years, mainly because its brutal tactics of beheading and dismembering many of its victims have prompted them to flee.

Maphwanya said the recent deployment of the advance team for the reinforcement of the SANDF contingent in Samim, as a result of its change of mission, had further helped to reassure locals.

General Siphiwe Lucky Sangweni, the SANDF chief of joint operations, explained this change in Samim’s mission, as from this week, which was officially authorised by the summit on Monday.

Sangweni noted that this would not be a “de-escalation” as some had described it and that it would actually require more troops, to implement the agreed transition from a “Scenario 6” to a “Scenario 5” mission, using the African Union’s classifications.

He said that so far, Samim had been operating under Scenario 6, which was “more an interventionist approach with small elements for a very limited period of time to go and address the situation aggressively to degrade the terrorist combat capability”.

ASWJ’s capability had now been degraded “a bit”, which was why it was conducting fewer offensives. Sangweni noted that Maphwanya had said that during Operation Buffalo one of the main insurgent leaders had been eliminated along with lesser leaders — but he added that no one could be sure that ASWJ’s overall leader had been eliminated.

“They have small cells which operate all over and have their own leaders. And eliminating the leader of a cell does not mean you have eliminated the leadership.”

Nonetheless, he said the reduction in insurgent attacks had enabled Samim to move to a Scenario 5 mission, though he explained this did not presuppose less effort.

Of the 1,495 troop ceiling authorised by Ramaphosa and Parliament for the mission, more than 500 were now deployed, he said.

This force was supported by medical staff including an air evacuation team, engineers, military police and a team to counter improvised explosive devices.

Maphwanya would not confirm or deny that Samim might still deploy attack helicopters, either South Africa’s Rooivalk or others. Analysts have said the lack of such helicopters is hampering Samim’s efforts to conduct hot pursuit operations against ASWJ into the bush and to their bases.

The SANDF chief also expressed pride that so far the eight countries contributing troops and SADC itself had been able to fund Samim on their own, which had enabled it to move into Cabo Delgado without waiting for outside finances. But the SADC secretariat was now seeking funding from international partners. It has already received a pledge of €1.9-million from the European Union to finance non-combat aspects of Samim’s new mission, but needs more money for its other operations.

And Maphwanya suggested that the SANDF budget was being overstretched, by its peace enforcement mission as part of the United Nations Force Intervention Brigade in the eastern Democratic Republic of the Congo, by Samim, and by domestic emergency work such as the rescue missions it was now conducting during the KwaZulu-Natal floods. He said some of the SA Air Force’s aircraft had been incapacitated by the floods at their base in Durban and so it had had to bring in other aircraft from bases in Port Elizabeth and elsewhere.

Maphwanya said the ambitions that South Africans had for their defence force had to be met by the commensurate resources. If South Africa wanted a single malt whisky, it would have to fund more than a Coke, he quipped.

He noted that Samim was in effect protecting South Africa from the threat of terrorism, because if this was not nipped in the bud in Mozambique it would spill over the borders. DM