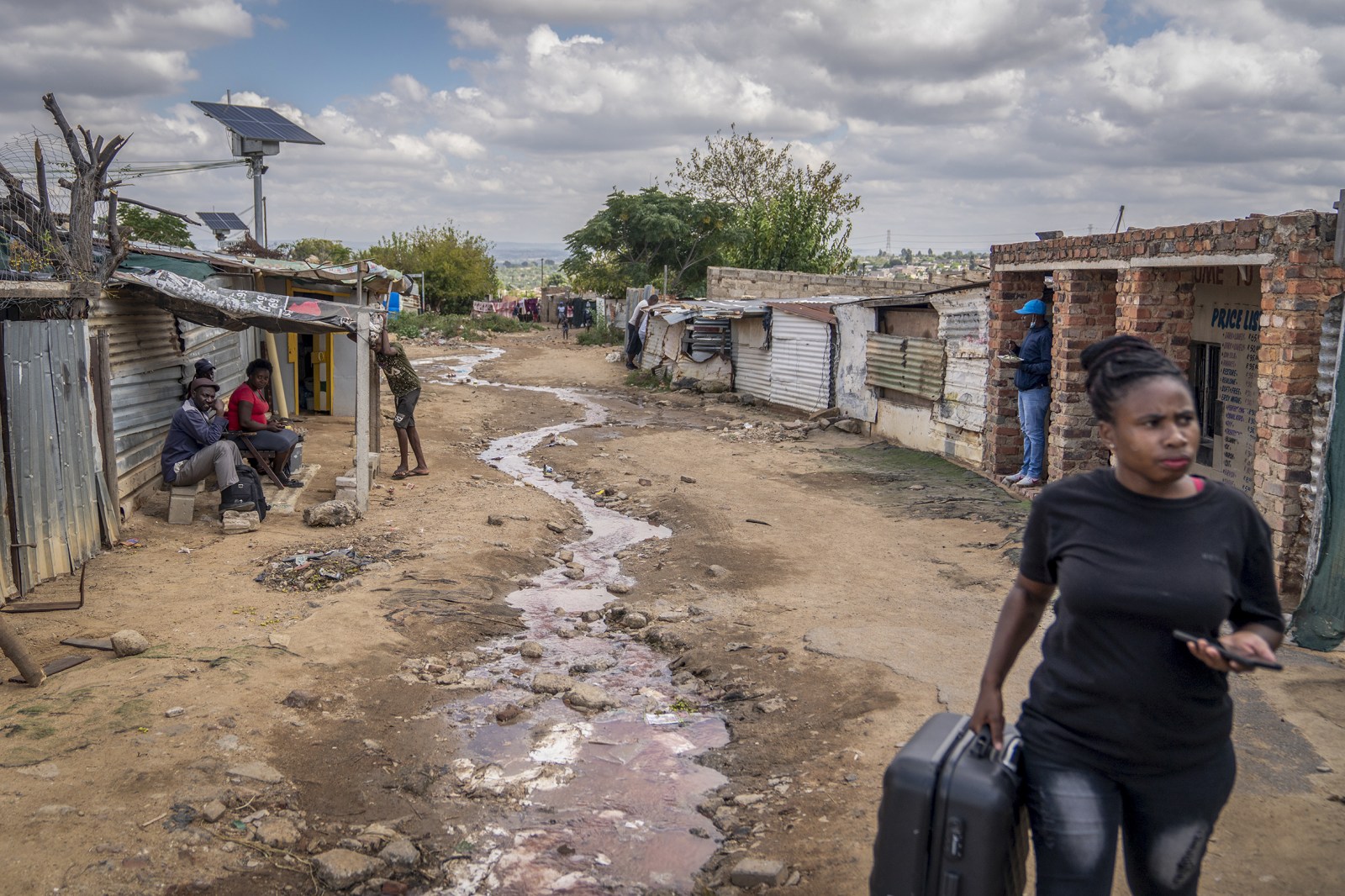 A woman walks down a road in Section Number 1. “This place is not conducive for business. I have tried several times to address the illegal dumping that happens near my shop … but it persists,” said Vuyelwa Dube, who has operated a fast food business in Diepsloot since 2014. (Photo: Shiraaz Mohamed)

Makhura and MEC for Transport Jacob Mamabolo were at the Diepsloot Youth Centre to discuss and talk up the new Township Economic Development Bill.

But many in the crowd expressed their anger at both Makhura and Mamabolo, and their frustration over the failure of basic services which makes it hard to operate a business in Diepsloot.

The new Act will do nothing if Diepsloot remains squalid, crime-infested and poorly serviced, the small and micro business owners told the premier.

“I have stayed in a shack here for 23 years,” said Seema. “We see all the development taking place in surrounding areas but not in Diepsloot. We can’t run a business in such a community.”

He said crime was chasing business out of Diepsloot.

“It’s hard to turn any corner in Diepsloot without coming across rubbish. It has become a norm here,” said Sandile Shoba. He sells braaied chicken and meat.

“No one wants to buy food near a smelly shop,” Patrick Madonsela, a small business owner from Extension 6, told Makhura.

“Our biggest issue is how poorly services are rendered to Diepsloot. This place is very filthy and pushes business away from us, uncollected refuse and poor water infrastructure are central issues,” he said.

Vuyelwa Dube has been operating a fast food business in Extension 2 since 2014. She said “This place smells and there are flies all over.” She said the City of Johannesburg allowed rubbish to pile up for weeks. “We need a lasting solution because even the neighbouring liquor store is badly affected by this dumping”.

“Our leaders fail us dismally when it comes to roads infrastructure,” Gilbert Chikopo, a local entrepreneur in the construction industry, told the premier.

He said the roads in sections of Extension 8 were in an appalling state.

Residents also lambasted MEC Mamabolo for the slow progress of the K46 road project on William Nicol Drive. The road was supposed to have been completed in 2017.

Electricity is yet another issue crippling business.

“There is also the electricity issue,” said Chikopo. “You can’t run a food business, for example, with recurring power outages … In Extension 8, our transformer blew up two months ago and Eskom has been promising to come, but nothing.”

“Incompetence by government sets us back as well. Address that!” Chikopo told Makhura.

Business owners also said it was impossible to run businesses from the pavements of Diepsloot. They want stalls and other business infrastructure built near the various taxi ranks.

In his speech, Makhura said the new bill was a “first of its kind legislation to strictly focus on SMMEs”.

He said the bill, which he will sign into law this April, will scrap by-laws that “make it hard for township businesses”.

“We have seen it. Where informal traders get harassed while trying to make a living for themselves. So the laws that were criminalising small businesses will now be replaced by one law,” Makhura told the business operators.

“We urge young people to go into business and create jobs. Not everyone should be waiting on the government. We know if township businesses get the right support they can generate a lot of income. We want Diepsloot to be a place of opportunity, ” said Makhura.

“If you have a business and need space, come to us. We will be able to assist you. Because some people come to us and say they don’t need money but land to expand their businesses … Our aim is to also support manufacturing in the townships,” said Makhura.

He urged local businesses to be compliant, pay tax, operate within the law and said health inspections were planned.

Residents said that in implementing the Act, Makhura must address the reality on the ground. DM