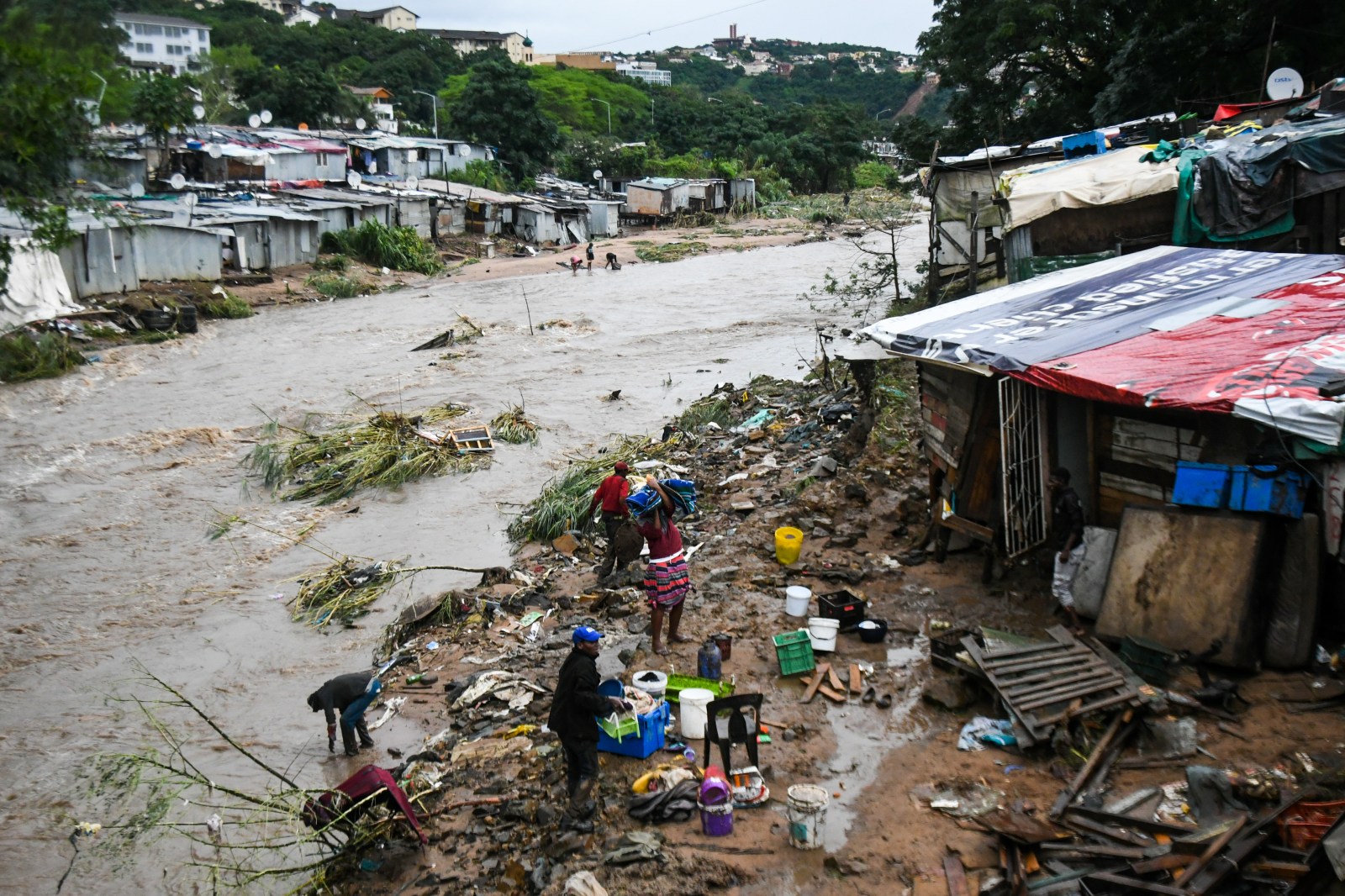 Civil society and humanitarian groups have called for urgent interventions in areas affected by flooding in KwaZulu-Natal, particularly informal settlements. While residents prepare for a potential further deluge, many have been left without access to water and electricity.

As KwaZulu-Natal continues to count the cost of the floods that have ravaged the province, poor residents who have lost their homes are in desperate need of humanitarian assistance, said the shack dwellers’ movement Abahlali baseMjondolo.

“The number of people who have lost their lives has yet to be confirmed, but our members witnessed people, including at least two babies, being taken by the water and many people are missing,” said the organisation, which is active in KwaZulu-Natal’s informal settlements.

“Huge numbers of people have lost their homes and all their possessions and are now entirely destitute. People living near rivers were worst affected.”

President Cyril Ramaphosa is scheduled to visit areas affected by the floods on Wednesday. The deluge has caused widespread damage to property and infrastructure after some regions in the province recorded more than 200mm of rainfall between 8 and 11 April.

The KwaZulu-Natal government said at least 45 people had died in eThekwini. The death toll could be much higher as emergency response teams continue to assess the damage and reach other regions in the province.

Abahlali baseMjondolo said: “We are calling for progressive organisations to assist those who are affected at this time when politicians are only interested in tenders and factional battles. We urgently need food, clothing, school uniforms and building materials and blankets.”

Dr Imtiaz Sooliman from the humanitarian relief group Gift of the Givers said he had been inundated with calls from businesses wanting to help.

He said Gift of the Givers would focus on “informal settlements, houses in low-lying locations and the non-insured that are dependent on a compassionate nation to assist them in their hour of distress.

“The need of the hour is huge, with massive damages to roads, highways turned into rivers, shipping containers floating on the N2, retaining walls collapsed with people trapped underneath, cars have been washed away, debris and trees blocking roads, people can’t get to work, health facilities had to reduce services, religious institutions, as well as many homes, have been damaged, electrical infrastructure is non-functional aggravating load shedding, streams have become raging rivers, people have lost their lives.”

Gift of the Givers teams are in Tongaat, where a woman and three children were swept away in the floods. Only the body of one child had been found, according to Sooliman.

“Hot meals, blankets, bottled water, warm clothes, sanitary pads and diapers are the initial requirements for those in low-lying areas who have lost their material possessions. Food parcels, school uniforms and stationery will be provided where the need arises; building material will be considered as well as repairs to damaged school infrastructure,” said the Gift of the Givers leader.

Responding to the #KZNFloods, we are on the scene in #Tongaat📍where a grandmother and her three grandchildren were swept away when a river in Flamingo Heights bursts its banks.

The bodies of the grandmother and two children have been found, one child remains unaccounted for. pic.twitter.com/p1DVYFyrYQ

Ramaphosa said the situation required an “effective response by government in partnership with communities”. The President met with the National Disaster Management Centre on Wednesday, and Cooperative Governance Minister Nkosazana Dlamini Zuma is reported to want a Regional State of Disaster declared.

The floods have significantly damaged the province’s infrastructure. More than 140 schools have been affected, roads have been swept away and bridges have collapsed. Landslides and flooding have wreaked havoc on commercial and residential property and power services have been interrupted, leaving many residents without electricity.

Water treatment plants have been damaged and scores of residents have no access to water. Even in Pietermaritzburg, which has seen less damage than Durban, there are reports of sewage running in the streets of Napierville after the city’s ageing stormwater and sewerage systems were flooded.

The government’s response to the devastating floods will be a huge test for the ANC, one which Abahlali baseMjondolo says the government has repeatedly failed.

Read in Daily Maverick: Could the KZN flooding disaster have been mitigated by a better early warning system?

Pointing to the recent election of corruption-accused Zandile Gumede as ANC chairperson in eThekwini and ANC members’ alleged involvement in the assassination of local activists, Abahlali said poor communities cannot rely on the government and will have to unite to rebuild their lives.

“Every disaster in Durban — from the hard lockdown to the riots, fires and floods — hits the poor the hardest. Natural disasters become entwined with political disasters, often resulting in devastation for the poor,” said the shack dwellers’ group.

“Since 2005 we have been saying that the conditions under which we are forced to live in a repressive society are dangerous as well as undignified.” DM