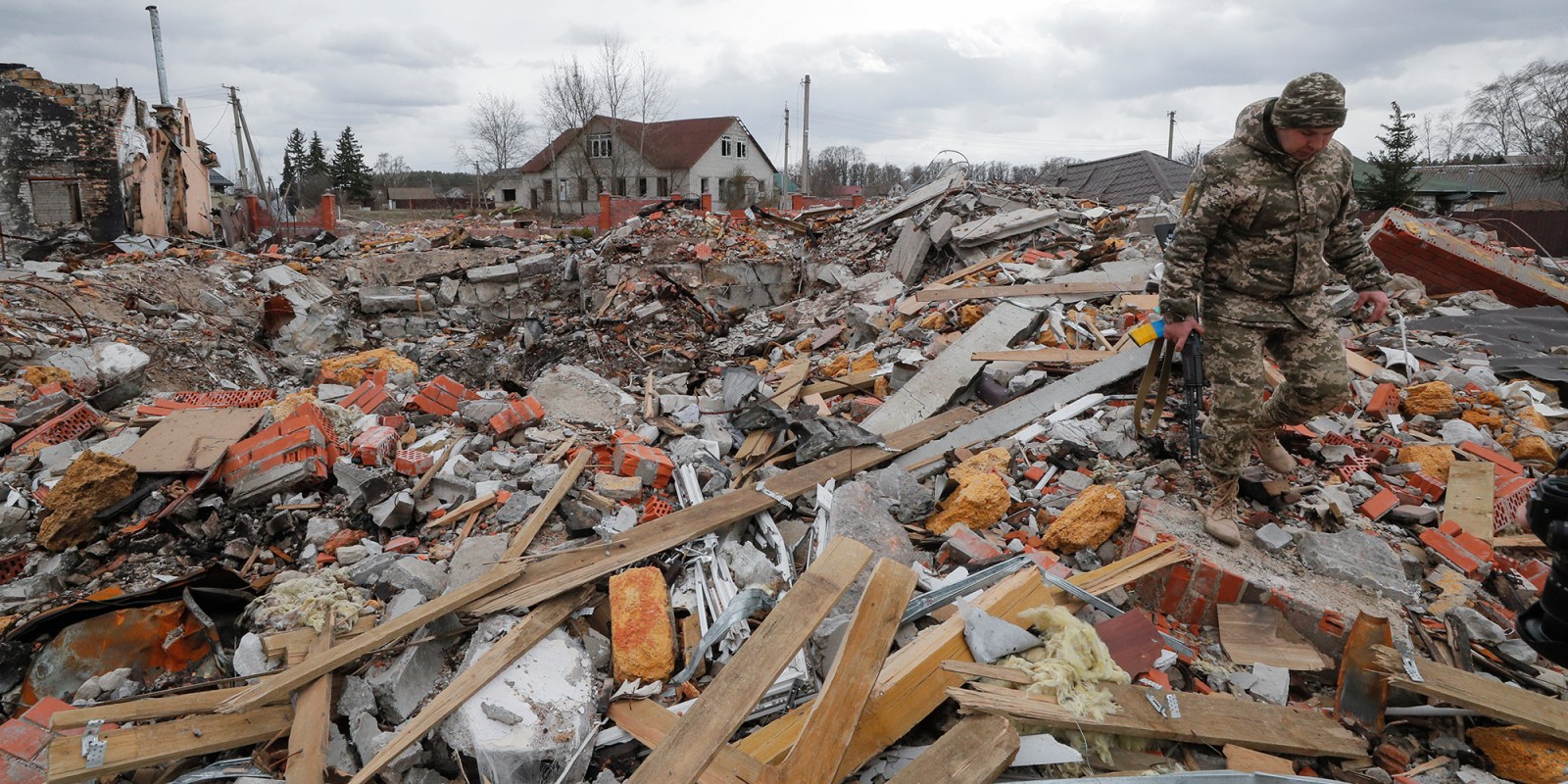 Russian President Vladimir Putin said peace talks with Ukraine are stalled and vowed to continue his ‘military operation’ there even as he called the conflict ‘a tragedy’.

There’s been little sign of progress in negotiations at a lower level after Ukraine accused Russian troops of carrying out war crimes in northern towns like Bucha by killing unarmed civilians. Ukrainian negotiator Mykhailo Podolyak said talks are “extremely difficult”.

Ukrainian President Volodymyr Zelensky again called for further European Union sanctions on Russia to include oil as well as all banks.

German President Frank-Walter Steinmeier planned to visit Kyiv in a gesture of solidarity with the Ukrainian government, but he wasn’t welcome, according to Bild.

“I was prepared for it,” the newspaper cited Steinmeier as saying in Warsaw on Tuesday. “But apparently, and I have to take this on board, that wasn’t wanted in Kyiv.”

Steinmeier has been criticised by Ukrainian officials for his previous support of the Nord Stream 2 gas pipeline from Russia to Germany. In a rare admission, the former foreign minister said in a TV interview this month that he and other German officials had failed in their policy toward Russia and President Vladimir Putin over the past two decades.

David Beasley, the World Food Programme’s executive director, said he will join efforts to ensure the “people in the greatest need around the world receive the support they need”.

Details of the plan are set to be outlined by the end of June, French Foreign Minister Jean-Yves Le Drian said, adding the food crisis will be discussed within the Group of Seven format.

Talks continue with Russia in working subgroups, Mykhailo Podolyak said by WhatsApp message, adding “the emotional background is difficult”. He said Moscow was seeking to use public statements to drive its claims in the negotiation process.

The “military operation” is going “according to plan”, Putin said in a joint press conference with Belarusian President Alexander Lukashenko. In his first public comments on the atrocities reported in Bucha, he said allegations that Russia was responsible were “fake”.

Putin also accused Ukraine of backing off earlier concessions. The government in Kyiv says it has not changed its position and in turn blames Russia for the lack of progress.

Russia’s economy has withstood the sanctions “blitzkrieg”, Putin said, citing the recovery of the rouble exchange rate. But he conceded that logistics and payment systems remain a weakness and the long-term impact could be more painful.

Europe’s biggest steelmaker said it was responding to a request from the government in Kyiv. The company idled operations at its Kryvyi Rih facility when the war broke out. Pig iron production will return to around a fifth of the plant’s normal output.

The company said sanctions would hurt aerospace manufacturers who depend on the lightweight metal and wouldn’t deter Putin when it comes to Ukraine.

The European planemaker has been stockpiling titanium for many years, Chief Executive Officer Guillaume Faury said at the company’s AGM. That’s given it some breathing room in the short and medium term, even if an embargo does take effect.

The comment from the cartel suggests it sees little need to divert from its current production policy. Opec Secretary-General Mohammad Barkindo told the European Union on Monday that the oil market was beyond its control.

The World Bank is preparing $1.5-billion for Ukraine to support the continuation of essential government services during the war, the institution’s president, David Malpass, said in Warsaw.

Donors and recipient countries approved $1-billion for Ukraine and $100-million for Moldova, according to Malpass. The disbursement is part of as much as $3-billion that the World Bank has pledged in funding for Ukraine following Russia’s invasion.

The number of people returning to Ukraine from abroad has jumped to about 30,000 per day, according to Andriy Demchenko, a spokesman for the State Border Guard Service.

While in the first days of the war mostly men were coming back to Ukraine, now there are more women, elderly people and children returning, Demchenko said in a video briefing. The United Nations Refugee Agency estimates that more than 4.3 million refugees fled the country after the outbreak of war, with some 7.1 million displaced internally.

Speaking to workers at the Vostochny Cosmodrome in Russia’s Far East, Putin said conflict with the West was inevitable and that Russia is too large to isolate from the rest of the world.

Confidence in Germany’s economic recovery slid for a second month as investors worry that price spikes driven by the war in Ukraine will dampen output.

The ZEW Institute’s gauge of expectations dropped to -41 in April from -39.3 the previous month, hitting the lowest since the Covid-19 pandemic took hold in early 2020. An index of current conditions also worsened.

“Some very powerful decisions must be taken and they must be taken now with the sixth package of sanctions,” Zelensky said in an address to the Lithuanian Parliament, referring to EU measures against Russia.

He warned that if Russia’s assault on Ukraine is not repelled, Europe may face security threats against nations including Poland, Georgia, Moldova and the Baltic states.

“If this equipment is to be useful somewhere, then it’s in Ukraine,” Sme quoted Heger as saying. European nations are attempting to ramp up weapons shipments to Ukraine amid concerns sanctions on Russia are insufficient to force Moscow to end the war.

Ukraine said it prevented a cyberattack on its energy infrastructure this month that was apparently launched by Sandworm, a group of hackers linked to Russia’s military intelligence agency.

Microsoft and Eset helped repel the attack, in which the hackers sought to disable power facilities using Industroyer2 and CaddyWiper malware, the nation’s telecommunications agency said.

India is planning to boost exports to Russia by an additional $2-billion as the two nations work out a payment system in local currencies to continue bilateral trade, according to people with knowledge of the matter.

Prime Minister Narendra Modi’s administration is in talks with Moscow to liberalise market access for several Indian-made products, the people said, asking not to be identified as the talks are private. This comes as the two governments work toward a proposal to settle trade in rupees and roubles and look for ways to balance trade given that India is a net importer of Russian goods.

Ukraine saw a rapid increase in prices for food staples, drugs and fuel last month, as Russia’s invasion disrupted supply chains and complicated access to imports, according to the country’s central bank.

Fuel costs rose by 30% from the previous year due to soaring prices in global markets and Russia’s targeting of Ukraine’s oil-storage facilities, even though the government scrapped sales and excise taxes on fuel to help ease the burden on consumers. Annual inflation accelerated to 13.7% from 10.7% in February.

British online fashion retailer Asos said its full-year earnings goal is at risk due to the fallout from Russia’s war in Ukraine and accelerating inflation. US consultant Accenture completed an exit from its Russian business following a transfer to several of its local leaders.

Nokia will exit the Russian market after having suspended deliveries, stopped new business and initiated a move of its limited R&D activities out of Russia in the past weeks, the Espoo, Finland-based telecommunications networks maker said.

Russia accounted for less than 2% of net sales in 2021 for Nokia, whose rival Ericsson on Monday said it had suspended business with customers in Russia “indefinitely” and put about 600 staff on paid leave.

Oil rebounded after a tumble that saw crude erase most of the gains sparked by Russia’s invasion of Ukraine. China’s virus outbreaks and mobility curbs are imperilling demand as it locks down Shanghai and other areas in pursuit of a Covid-zero strategy that has made it a global outlier in handling the pandemic.

The next major test for markets loomed later on Tuesday when the US was expected to unveil an inflation print for March of more than 8%. The Ukraine war is disrupting flows of essential commodities, and China’s lockdowns are straining supply chains.

Some 84% of Finns believe Russia poses a significant military threat, according to a survey by Finnish Business and Policy Forum EVA, with the government set to kick off a process that may culminate in an application to join Nato.

In 2005, fewer than one in three in the Nordic country with a 1,300km border with Russia considered Moscow a major threat. The change helps explain why Finns now back Nato membership, with the government seen leaning toward an application within weeks. DM