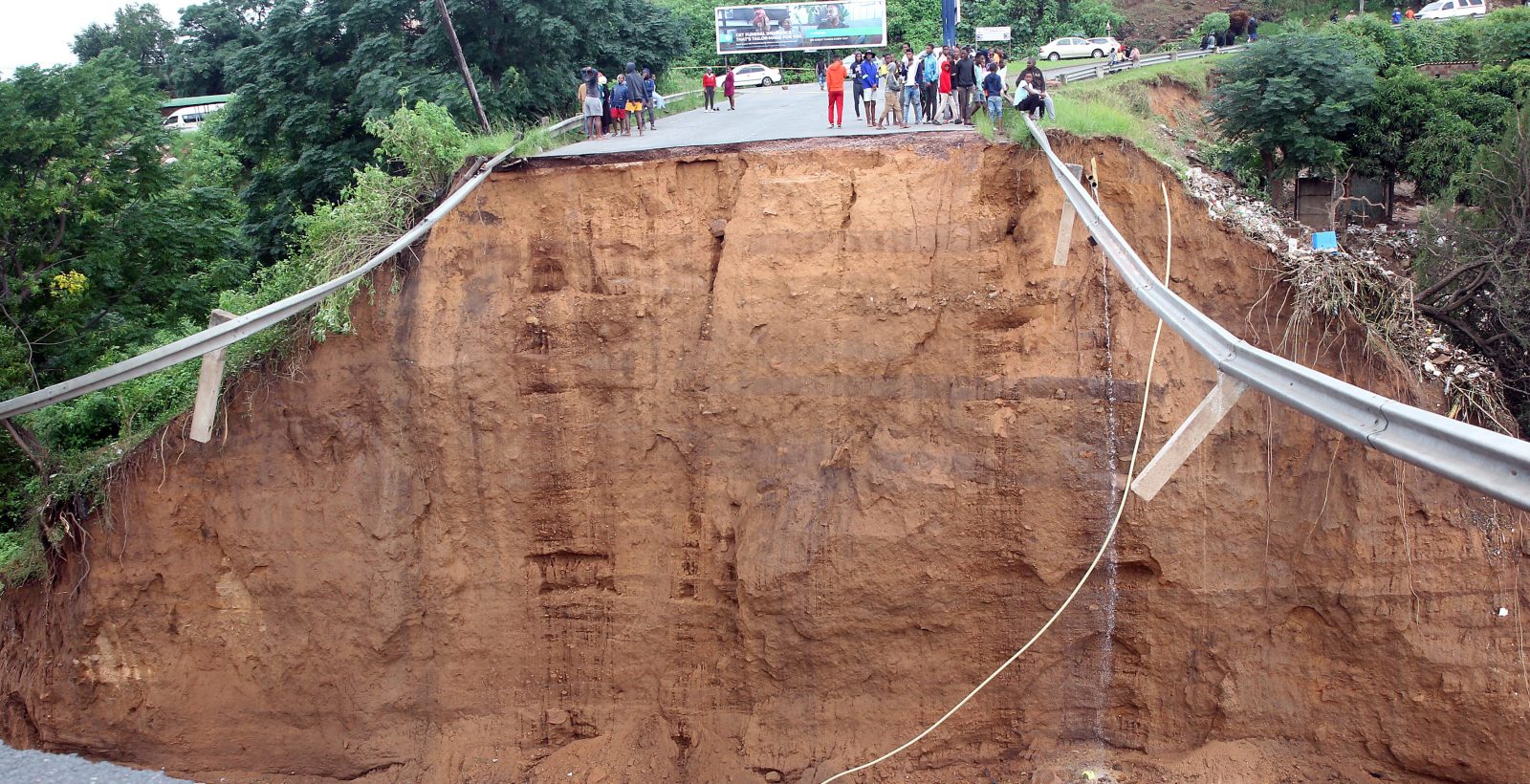 This bridge at Nhlungwane extension was washed away, leaving a crater. It was on the main road connecting Ntuzuma and areas such as Inanda and KwaMashu. (Photo: Mandla Langa)

After more than four days of constant rain, KwaZulu-Natal’s infrastructure, which has been under strain from years of under-investment and poor maintenance, buckled. This led to multiple drownings, landslides, power outages, water shortages and flooding of bridges, homes and businesses on Monday and Tuesday. And the wet weather is set to resume through the Easter weekend.

Scores of people have died, suburban walls have collapsed, vehicles have ploughed into newly-formed sinkholes, cemeteries have flooded and many businesses have temporarily closed.

Adding to the complexity is that rescue teams across the city are cut off from each other with major thoroughfares completely flooded, roads washed away and some bridges nearing collapse. The inclement weather has also prevented any major air support from getting off the ground.

At last count, four people had officially been confirmed dead, but this is a moving target, with more deaths yet to be confirmed. On Tuesday afternoon, Premier Sihle Zikalala said he would be in Georgedale, in the Hammarsdale area, where five members of one family died.

At a press briefing on Tuesday afternoon, eThekwini mayor Mxolisi Kaunda said that “many people had lost their lives”, but that the provincial department of cooperative governance (Cogta) had been tasked with releasing the official number of fatalities.

Read in Daily Maverick: Tragedy in KZN as floods cause devastation, mostly for the poor in informal settlements

A journalist door-stopped Cogta MEC Sipho Hlomuka just after that briefing, where the MEC said that 45 people had lost their lives in eThekwini alone.

Kaunda said the city’s call centre had been overwhelmed on Monday night and it was not possible to tend to every issue phoned in.

“Most of the city’s electricity power stations have been flooded and our teams were unable to access them [on Monday night]. There are certain water treatment plants that have been damaged, including those that belong to Umgeni water.”

The cost of the damage was yet to be tallied, said Kaunda.

He said the city would “interact” with those who had lost family members.

He confirmed that some cemeteries were flooded but did not comment on reports that coffins had been left exposed at the Ntuzuma cemetery, north of Durban.

Kaunda said that scores of residents, including himself, were without water.

He said that there was ongoing “communication” with the South African National Defence Force, which had been approached to assist the city and province. It was hoped the defence force would arrive on Tuesday evening, he said.

Read in Daily Maverick: Could the KZN flooding disaster have been mitigated by a better early warning system?

He sidestepped questions about the state of the city’s drainage and stormwater infrastructure, which has been in a state of disrepair for several years, saying that most of the issues currently being experienced related to landslides.

By Tuesday lunchtime, the Passenger Rails Association of South Africa (Prasa) took a decision to “temporarily close the Cato Ridge line due to the heavy rains that affected the safety of trains running on that line”.

Roads washed away and cables exposed

Meanwhile, a key entrance to the Durban port, known as Bayhead Road, which runs along a canal, has had large parts of the road washed away, with piping and electrical cables now exposed. Nearby trucks can be seen partially submerged while flooding is threatening warehouses close to the canals. Transnet Port Terminals told Daily Maverick it would be releasing a statement on damage to its properties throughout the course of the day.

Durban’s river systems, such as the Umbilo, Umgeni, Amanzimtoti and Ohlanga rivers have all burst their banks, endangering the lives of informal dwellers.

Shipping containers have been floating on the flooded N2 freeway near Durban’s old airport on Tuesday.
Video supplied. @TimesLIVE pic.twitter.com/8K6qCWkn1m

“Our teams are still collating the extent of the damage so far. Disaster management teams have been evacuating people in areas that have experienced mudslides, flooding, and structural collapses of buildings and roads. The heavy rains have affected power lines in many municipalities with technical teams working around the clock to restore power,” said Hlomuka.

He is due to officially address the media on Tuesday afternoon, where an update on the number of deaths is expected.

We are awaiting assessments from various areas in KZN. We will be in attendance at the JOC Disaster Management meetings and will then intervene based on what’s required. Our condolences💚to families who have lost loved ones and strength to those who have suffered material losses pic.twitter.com/ahR3Ns0tzl

Craig Lambinon, spokesman for the NSRI, said their stations along the coastline were continuing to assist emergency services in multiple flood-related incidents along the coast and inland.

He said that on Monday night and Tuesday morning, rescue teams were “inundated with emergency calls and are continuing to assist in flood-related incidents involving local citizens, domestic and farm animals and wildlife”.

MTN said on Tuesday that 500 sites were down in KZN, the result of infrastructure damage and power outages due to the rain. Contingency plans had been activated for site restoration, it said.

The Department of Water and Sanitation warned residents living downstream to stay away from dams owing to an imminent increase of outflow from them.

“Residents are warned to steer clear of the dam areas. Communities with equipment in and near the dams are asked to remove them so as to ensure that no damage is caused,” said the department.

It had also been decided that Umgeni Water would release water from the Hazelmere Dam north of Durban, as a safety measure while work continued to raise the dam wall.

If forecasts are correct, the driving winds and rain are expected to subside over the next 24-hours, but the respite will be short-lived, with downpours forecast to continue over the Easter weekend and into next week.

Hlomuka advised residents in low-lying areas to seek shelter on higher ground, adding that public halls had been opened to accommodate those in need.