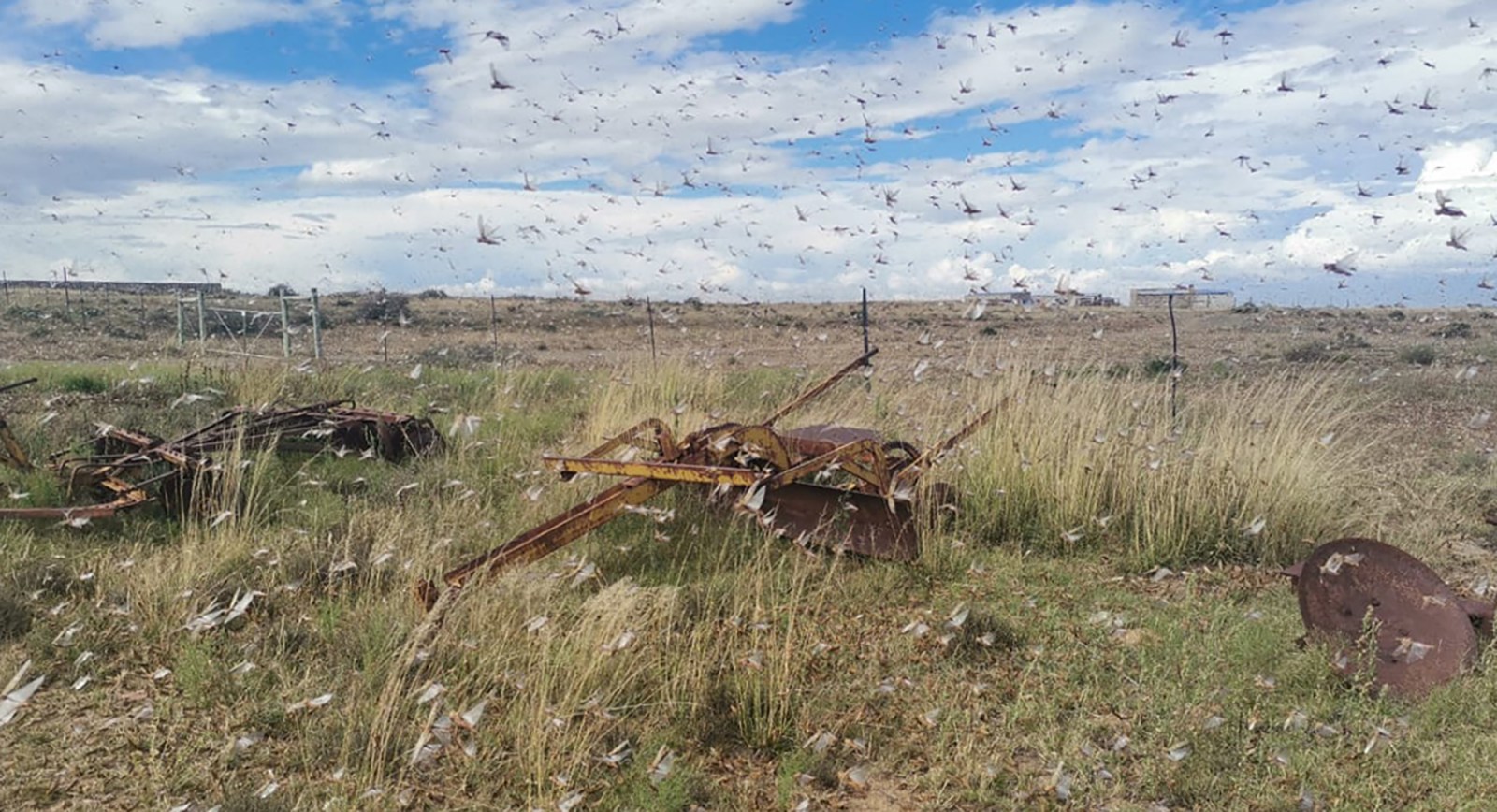 A swarm of locust take over a farm in the Northern Cape, South Africa. (Photo: Supplied)

Brown locust outbreaks typically develop after a long drought in the Karoo when locust populations slowly build up over a vast area.

The locust plague in parts of the Northern Cape, Western Cape and Eastern Cape Karoo is by far the biggest outbreak in the past 25 years, according to entomologist and locust expert Dr Roger Price.

“The current outbreak is classified as a plague. We have small outbreaks very often in the Karoo, but big outbreaks only occur about once per decade. Previous plagues have been bigger in extent, such as the 1985-1986 outbreak as well as the outbreak in the early 1970s. Uncontrolled plagues during the 1920s and 1930s used to infest the entire southern African region, right the way up to the Zambezi River,” he said.

Price said brown locust outbreaks typically develop after a long drought in the Karoo when locust populations slowly build up over a vast area.

“Once widespread drought-breaking rains fall then all the locusts hatch out in many areas. The locusts can then breed successfully in the wetter conditions and after a few generations a plague can develop.”

He said the genetics of the locust switch and the locusts turn from a “solitary phase” into a “swarming gregarious phase”.

“This phase transition is brought on by the increasing density of the locusts which triggers the switch to swarming once a certain density is reached. The solitary phase likes to stay isolated and the adults fly at night. The swarm phase likes to stay in dense groups … adults only fly during the day.”

He said the brown locust has the greatest differences between the solitary and swarm phases of any of the world’s locust species.

“It has a great ability to switch to the swarming phase very quickly once conditions in the Karoo are suitable,” said Price, adding the brown locust is a grass feeder.

“This will include natural and cultivated grasses … crops of maize, sorghum and wheat. In very dry conditions the locust will eat the leaves off the Karoo bushes, but reports of damage to vegetable crops are very rare. There has been no reported damage to fruit trees. However, other locust species, such as the red locust, will eat citrus and other fruit trees.”

According to Price, this is a typical outbreak cycle that is related to the normal long-term weather cycles in southern Africa.

“We are currently in a wetter La Niña cycle so we have more chances of locust outbreaks. The outbreaks die out during the drought brought by the El Niño systems. However, with increasing climate change, we may have more intense outbreaks brought on by the unpredictable weather. Locusts have outbreaks when we have widespread rains after an intense drought period.”

He said they are unable to stop the locusts from swarming and are likely to have more outbreaks in the years to come.

“The next drought cycle in the Karoo will stop the locusts. However, the farmers certainly would prefer to have the rain for their veld, along with the locusts that come with the good rains,” he said.

Price said in South Africa the locusts are a declared national pest.

“Landowners are legally required to report the locusts on their land, but the government has the responsibility to control the locusts. Farmers need early warning and good communication systems. The government locust officers need access to pesticides, modern equipment and training in order to apply the pesticide as safely as possible,” he said. DM/OBP