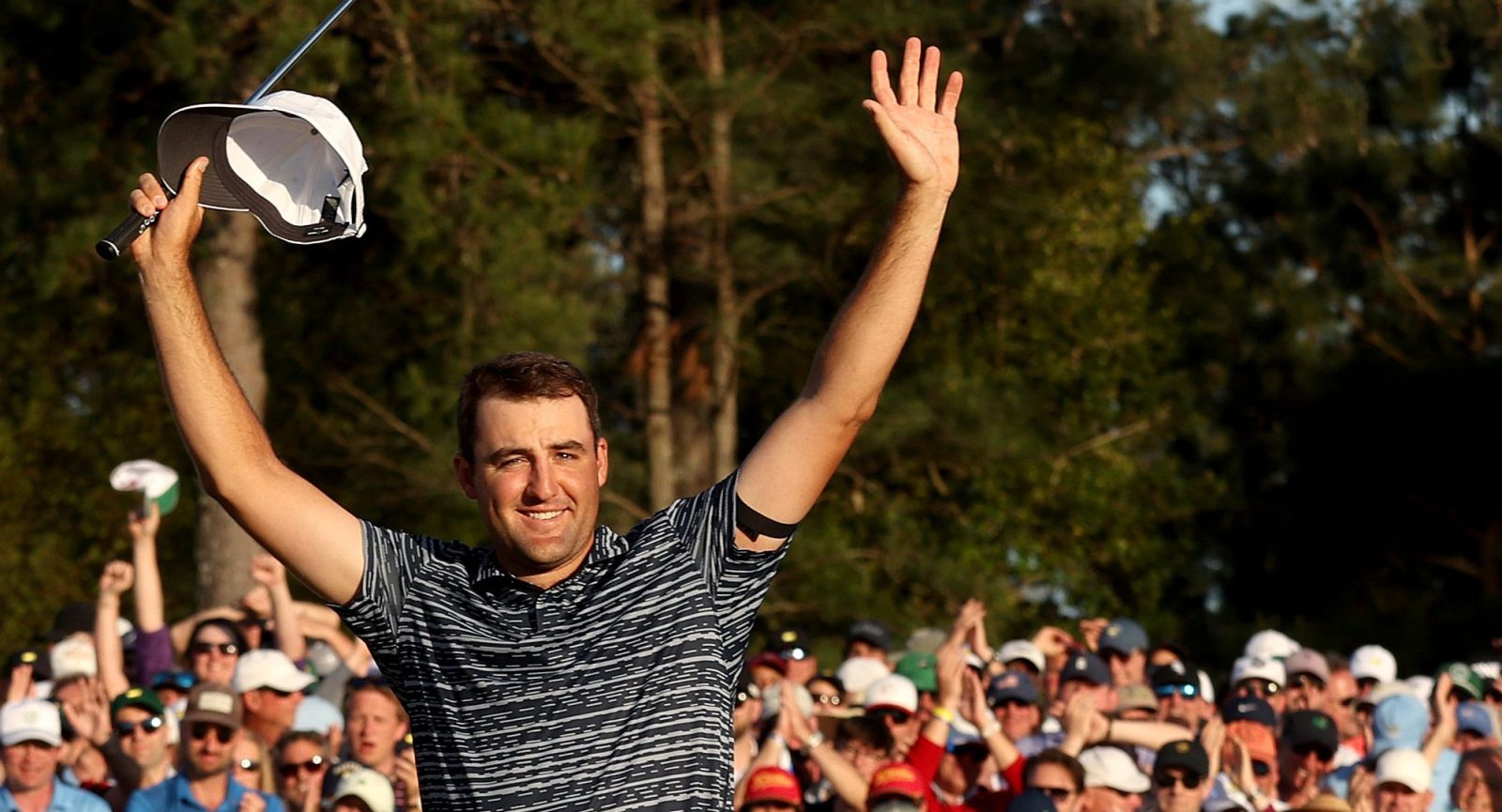 Scottie Scheffler of the United States celebrates on the 18th green after winning during the final round of the Masters at Augusta National Golf Club on April 10, 2022 in Augusta, Georgia. (Photo by Jamie Squire/Getty Images)

World No 1 Scottie Scheffler won his maiden major at the Masters on Sunday. He has the game to win many more.

Scottie Scheffler held rock-steady and cruised to a three-shot victory at the Masters on Sunday to earn the coveted Green Jacket and cement his status as the world’s top-ranked golfer.

From winning his first PGA Tour event at the Phoenix Open just two months ago to claiming his first major title at Augusta National, Schleffer’s rise has been nothing short of meteoric.

Starting the final round with a three-shot advantage over Australian Cameron Smith, the 25-year-old American carded a one-under 71 for a 10-under 278 total, three clear of Rory McIlroy and five ahead of Smith.

McIlroy’s eight-under 64 matched the final-round record at the Masters as the Northern Irishman made a stirring late charge in a bid to claim the elusive title that would have seen him complete the career Grand Slam.

Scheffler said he could afford to focus on his own game thanks to his three-shot cushion.

“I may have looked calm on the outside, but it’s a long day. It’s a tough day,” said Scheffler. “I was fortunate to put myself in a position where I was in control of the tournament today, so I didn’t have to worry about what anyone else was doing out there.

“If I took care of my stuff and played good, solid golf; I felt like I would get the job done.”

The year’s first major was poised for a showdown between the planet’s two hottest golfers in Scheffler, the winner of three of his last five PGA Tour starts, and Smith, who claimed golf’s unofficial fifth major at the Players Championship in March.

And that is how the final round unfolded until the par three 12th in the heart of the notorious Amen Corner when Smith put his tee shot into Rae’s Creek on the way to a triple bogey six, sending him down the leaderboard.

“It’s just a really bad swing,” said Smith. “Probably one of the worst swings of the week and just at the worst time of the week. Just unfortunate, but I’ll grow from this and be stronger for it.”

A rattled Smith never recovered, slumping to a one-over 73 to finish five back in a tie for third with Irishman Shane Lowry, who closed with 69.

Smith got his day off to a scintillating start with back-to-back birdies.

But Scheffler hit back with a spectacular chip-in birdie at the third, which Smith would bogey, restoring the world No 1’s three-shot cushion.

Smith slumped to a second bogey on the par-three fourth and suddenly Scheffler had stretched his lead to four.

As the pair started the back nine, a mighty roar rolled across Augusta National after McIlroy carded an eagle at the 13th to get to six-under for the tournament.

That left McIlroy five back of Scheffler and one behind Smith, raising pressure on the pair as they entered Amen Corner – holes 11, 12 and 13, perhaps the most famous stretch of golf real estate where so many Masters have been won and lost.

“I’ve had the lead on the back nine here and haven’t been able to get it done,” said McIlroy. “I just wanted to try and put a little bit of pressure on and I feel like I did that.”

A long birdie putt at 11 by Smith triggered an explosion of cheers that would have been heard back home in Brisbane.

But then came the 12th, where so many Green Jacket dreams have turned into nightmares, Smith’s now among them after his tee shot found the water.

“It was definitely nice to build up a lead,” said Scheffler. “Nothing is safe out there on the back nine on this golf course.

“I’ve heard all the things that everybody says – it doesn’t start till the back nine on Sunday, anything can happen, don’t hit in the water on 12 – all the stuff. I just blocked most of that out and tried to execute and hit good golf shots.”

The only moment Scheffler showed any hint of nerves came at the very end, standing on the 18th green and missing two short putts that would have given him a bigger margin of victory.

Scheffler is golf’s new leading man but his family will make sure success does not go to his head, according to his caddie, Ted Scott.

Moments after completing a Masters caddie hat-trick, having previously won with Bubba Watson in 2012 and 2014, Scott opined that a good family environment allowed Scheffler to play golf without a crushing burden of expectation.

“This guy is very much loved at home. Golf is not first and that gives you the comfort to go out and make mistakes and still perform,” Scott told a group of reporters while his boss was having the Green Jacket slipped over his shoulders in the Butler Cabin.

“If you put the expectations of the world on you it’s hard to perform.”

Scott recited a text he received from Scheffler last week relating a story of being asked by his wife to take out the garbage, never mind his new exalted status in the golf world.

“I thought it was hilarious,” Scott said. “He (Scheffler) said, ‘dude, my wife asked me to take the trash out’ and I said, ‘honey, I’m number one’. She said, ‘I don’t care, go take the trash out’. So I still have to do my chores.’ That’s a big part of staying grounded and not getting too big of a head.”

With wife Meredith and parents Scott and Diane among the gallery at Augusta National, 25-year-old Scheffler overcame some early Sunday nerves, all but frittering away a three-shot lead before settling down and playing almost flawlessly until victory was assured.

A four-putt double-bogey at the last was a luxury he could afford.

Scott acknowledged that early nerves contributed to some loose early swings by Scheffler:

“This game is very difficult to stay in the moment and not time travel. Obviously he was nervous the first few swings, got a little loose, but I think that’s normal for anybody. You get so much adrenalin it’s very hard to control that around a golf course that demands so much precision.”

As meteoric as Scott’s rise from relative obscurity to top dog has been, those who have followed him closely are hardly surprised.

As Scott explained, Scheffler has “ticked all the boxes” at every stage of his career.

Top-10 finishes in three majors last year – a tie for 18th at the Masters his worst result of the lot – gave an inkling of what was to come, as did a 4&3 thumping of then world No 1 Jon Rahm at the Ryder Cup.

“He’s very driven. He really doesn’t have a weakness, he’s tough mentally and then he has all the experience of being the US junior champion, great college player, (secondary tour) player of the year, rookie of the year on the PGA Tour. He just has the pedigree of a winner.” DM/Reuters