Hunt for a third Springbok flyhalf — young guns put u...

BOK TO THE FUTURE 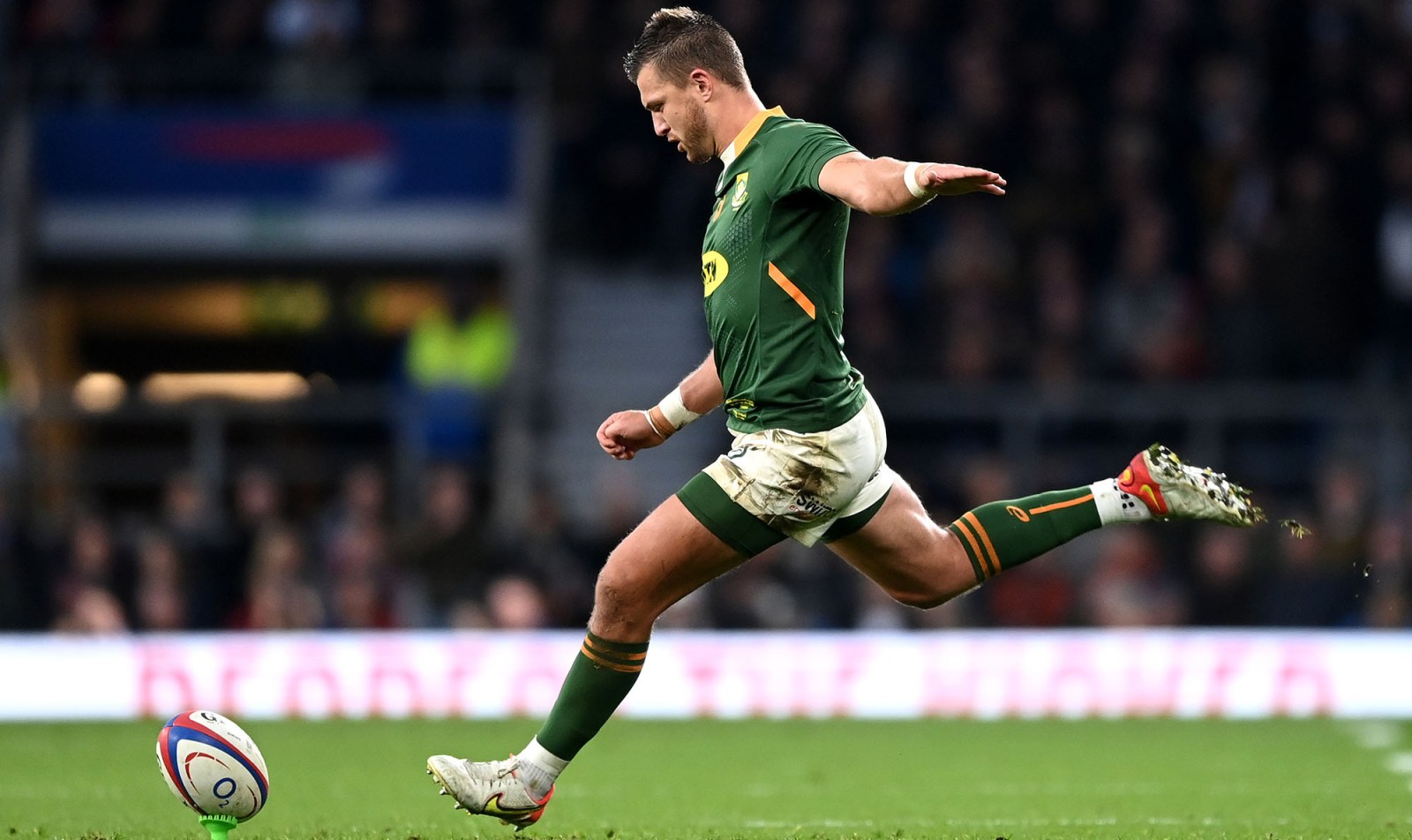 Bringing one of the younger flyhalves into the squad could boost the Boks in the medium and long term.

Rassie Erasmus and Jacques Nienaber are leaving nothing to chance in 2022. After relying on mainstays such as Handré Pollard and Elton Jantjies for the better part of four years, the coaching team is on the hunt for a third flyhalf option.

Pollard has suffered a couple of major injury setbacks over the past two years, and Jantjies is fighting his way back from a shoulder ailment. The Boks have been fortunate, however, that neither player has been forced to miss a Test due to injury since Erasmus and Nienaber took charge in 2018.

Morné Steyn was brought into the national squad as flyhalf cover ahead of the series against the British & Irish Lions in 2021. While the veteran’s goal-kicking and game management strengths were rightly highlighted, the decision to recall a 37-year-old to the Test team served as a criticism of South Africa’s lack of depth at No 10.

At one stage, there was talk of Steyn occupying that role right up to the 2023 World Cup. When the player decided to retire in October, however, Nienaber and company were presented with a familiar dilemma.

They could hope and pray that Pollard and Jantjies remained fit in the lead-up to the global tournament or they could bring a third specialist flyhalf into the squad.

Goosen a perfect fit, but…

Nienaber addressed the matter in a virtual media briefing this past Sunday. Several alignment camps will be staged in the buildup to the Test series against Wales this July, and the coaches will discuss their plans with players of interest. Nienaber confirmed that he is talking to Johan Goosen about fulfilling that role.

Ten years ago, Goosen — then 20 — was backed to start at flyhalf against the All Blacks in the Rugby Championship. While his Test career stalled, he went on to represent Racing 92 and Montpellier in Europe and won titles with both teams.

In July 2021, Goosen was recruited by the Bulls and backed to start against a South African A side at the Cape Town Stadium. After steering the franchise to an unexpected victory, he was named Man of the Match. Many felt that he deserved a recall to the national squad.

It’s nearly a year later, and Steyn is no longer in the Test mix. Nienaber is now looking to Goosen — or someone similar — to fill that void.

While Goosen has excelled for the Bulls at flyhalf, he has also played in the centre in France and has represented the Boks at fullback. Nienaber is looking for a specialist, but Goosen’s versatility in a squad environment must be viewed as a plus.

The 29-year-old’s knowledge and experience of French conditions will be invaluable given that the 2023 World Cup will be staged in that part of the world. On Sunday, Nienaber said he was reluctant to take players with fewer than 10 caps to the global tournament. Goosen has 13 caps at present, and may well add to that tally before the Boks depart for Europe next September.

“The alignment camp will give me a good chance to chat with him and pick up on his character,” Nienaber said. “Does he still aspire to be a Bok? Does he want to go to the World Cup?

“Handré made his comeback from injury [for Montpellier against Harlequins] on Sunday. We hope that Elton will get some game time in Japan before the series against Wales.

“We’ve got Frans Steyn, Gaza [Damian Willemse] and even Cheslin Kolbe, who had a good stint at No 10 for Toulouse last year. I think we are covered for a third-choice flyhalf within the squad. However, it would be nice to have another option like Goosen. We just need to see where he stands with his injury.”

Goosen tore knee ligaments while on duty for the Bulls in the United Rugby Championship (URC) last October. This is why he wasn’t brought into the national squad for their matches against Wales, Scotland and England.

Following the Bulls’ loss to the Stormers in Cape Town, coach Jake White revealed that Goosen is unlikely to be back in time for the Boks’ Rugby Championship campaign.

Local flyhalves put their hands up

Nienaber will need to explore other alternatives in the interim. He can’t wait until Goosen has regained full fitness in September or October, or possibly even next year, before investing in a third flyhalf option.

Fortunately, the local flyhalves are starting to find form at the back end of the URC.

Boeta Chamberlain and more recently Curwin Bosch have impressed at the Sharks, while Manie Libbok has been a revelation at the Stormers.

Junior Boks pivot Jordan Hendrikse has caught the eye of the national selectors after delivering some influential attacking performances for the Lions.

“In January, I was actually a bit worried about our depth at 10,” Nienaber said. “I was hoping that someone would put up their hand in the URC. As we saw this past weekend, four pairs of hands were raised.”

While Nienaber has commended the local flyhalves for their performances in the URC, will he back these youngsters — Libbok is 24, Chamberlain is 23 and Hendrikse is just 20 — to play this season?

A strong showing in the URC playoffs may convince national selectors that these individuals deserve an opportunity sooner rather than later.

Nienaber has highlighted the fact that only 17 Tests remain before the squad departs for the 2023 World Cup. With regard to the flyhalf position, the coach faces a particularly challenging balancing act.

Nienaber needs to ensure that Pollard, the first choice, gets enough game time at Test level and that he finds some form before the global tournament. Jantjies also needs to be managed with the World Cup in mind, as he will be the go-to man if Pollard breaks down with an injury.

Somewhere along the line, Nienaber must find space for a third option — either in a starting capacity or from the bench. Of the utility players in the regular squad, Willemse appears the best bet for a stint in the flyhalf channel.

Bringing one of the younger flyhalves into the squad could boost the Boks in the medium and long term.

If South Africa win the first two Tests against Wales, Nienaber may be tempted to blood one of the young guns in the third game of the series. The fixture against Italy in November may also present the coach with an opportunity to develop his younger and less experienced charges. DM