Blitzboks stumble in Singapore and lose record while Fiji fly 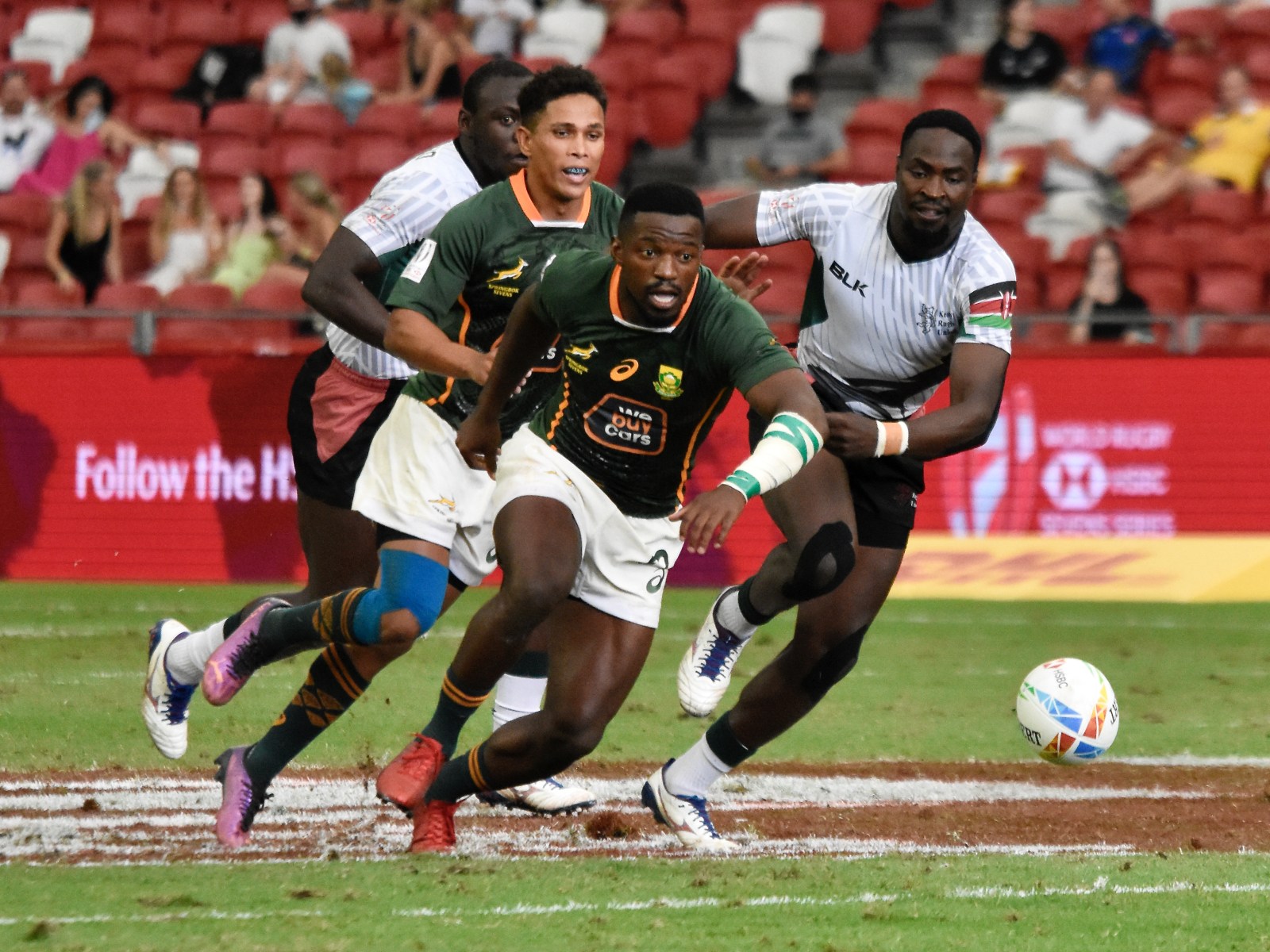 The Blitzboks delivered their worst performance of the season in Singapore, but remained firmly on top of the HSBC World Sevens Series standings.

The Blitzboks started their weekend at the National Stadium in Singapore in typically dominant style on Saturday when they crushed Canada and Kenya 31-5 and 26-5 respectively in their first two group matches.

However, that was where the good times ended for the reigning Singapore sevens champions as they failed to win another match all weekend. The Bok Sevens team eventually finished sixth place after losing 22-15 in the fifth-place playoff.

“We always knew that we would lose somewhere along the road; it was going to happen sometime or another,” said Blitzboks coach Neil Powell.

“We never managed more than two phases on attack and when you concede so much possession as we did against a team that is so effective on the counterattack as the USA, you will be in trouble. We learnt that lesson today.”

The loss meant that the Blitzboks finished second in their group and met Fiji instead of Ireland on Sunday at the Cup quarterfinals stage.

Return of the Island Nations

The Singapore Sevens event welcomed the return of Fiji and New Zealand to the circuit as the Pacific Island teams’ participation was hampered by Covid-19 regulations.

The Blitzboks dominated the circuit in their absence, winning four successive tournaments (Fiji played in two of those). The extra physicality, previously missing from the tournament, displayed by the flying Fijians proved the difference as the Blitzboks narrowly lost their quarter-final clash 19-14.

The All Blacks Sevens and Fiji returned with aplomb as the island nations competed in the Cup final. Fiji eventually ran out to a 29-17 victory to comfortably secure their crown as Singapore champions despite a valiant fightback by the men in black.

Fiji missed rounds three and four in Spain, but in Singapore they showed they are back in business.

In a repeat of the Tokyo Olympic final, which Fiji won 27-12 last year, matches between Fiji and New Zealand were often classics and the final did not disappoint.

Vuiviawa Naduvalo scored his ninth try of the weekend after two minutes to give Fiji the lead, with Kaminieli Rasaku converting. Waisea Nacuqu then scored — and converted — Fiji’s second try and they had a healthy 14-0 lead.

Just before the break, Joseva Talacolo scored Fiji’s third try, converted by Rasaku, and it got worse for New Zealand as Leroy Carter was yellow-carded.

New Zealand needed the first try in the second half to give themselves any hope and a score came from Regan Ware, but it was not converted. With Jerry Tuwai pulling the strings, Fiji’s fourth try came through Naduvalo, his 10th of an amazing two days. Rasaku converted.

A Moses Leo try — converted by Akuila Rokolisoa — and then an unconverted effort from Caleb Tangitau for New Zealand made the final score 28-17.

Fiji captain Tevita Daugunu said: “It was a very good final. We knew we had to keep the ball away from New Zealand and for most of this final we did just that.

“The team stuck to the game plan perfectly and with it being Palm Sunday back home we hope this has made our family, friends and supporters happy.”

Player of the Final, Naduvalo, who scored 10 tries over the course of the weekend said: “I am so happy, it has taken a lot of sacrifice for me to get this far and that is why I was so emotional during our national anthem. This victory is for my family, they are my ‘why’, they drive me on and I want to make them proud.”

The quarterfinal loss to the eventual champions meant that the Springbok Sevens’ last match of the Singapore leg of the tournament would be a fifth-place play-off against Argentina.

The Blitzboks weren’t much better in their final game as poor discipline proved costly. Two yellow cards on either side of halftime, one for Selvyn Davids in the first and another for Ryan Oosthuizen in the second meant the Bok team was never really in the contest. A consolation try at the death by Impi Visser made the 22-15 final scorecard look respectable.

Despite losing their unbeaten record in Singapore, South Africa continue to lead the series standings with 98 points from five of the nine rounds played in the 2022 Series. The Blitzboks lead Australia and Argentina who are tied second on 83 points. DM