Migration in a time of war: A tiny bird’s mighty trek...

Migration in a time of war: A tiny bird’s mighty trek through Ukraine battle zones 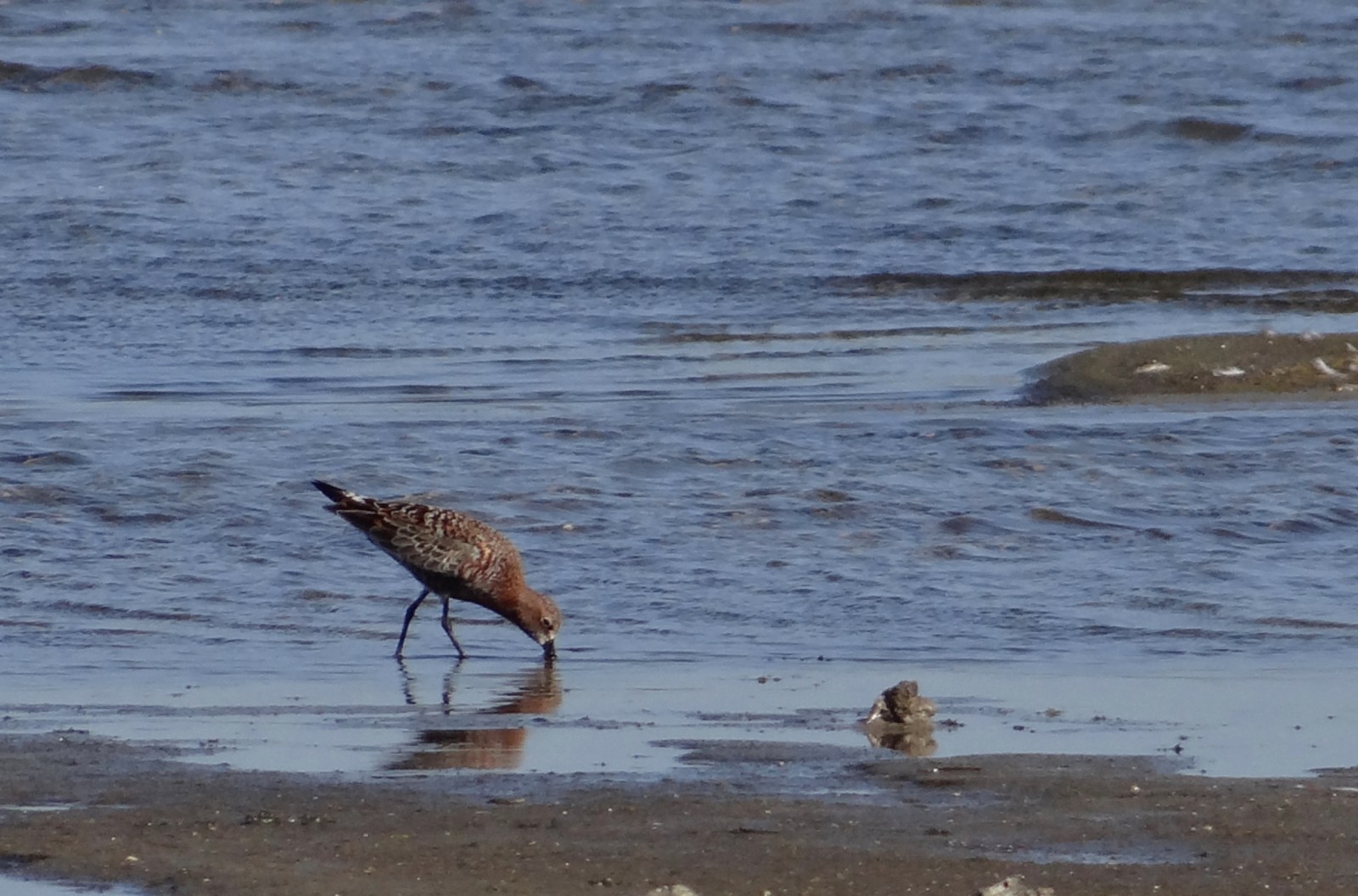 This Curlew Sandpiper was in full breeding plumage in Richard’s Bay, South Africa, and would have been about to leave for the breeding grounds on 15 April 2016. Its route to the tundra might have taken it through the Ukraine. (Photo: Richard Johnstone)

In the next few weeks, Curlew Sandpipers, and many other birds, probably counted in millions, are going to migrate through the battle zones of the eastern half of Ukraine. It will be migration in a time of war. We simply have no idea of whether the habitats they will use have been affected by military activity.

During late April and May, Curlew Sandpipers, and lots of other migrant waders, will be migrating through Ukraine. They will be joined by many passerine migrants, such as the warblers. There will also be some of the migrant raptors, such as Steppe Buzzard, and the big eagles (such as the Lesser Spotted Eagle), and the small falcons (such as the Lesser Kestrel). They will be on their way to breeding grounds in the Russian tundra, the taiga and the steppes.

Most Curlew Sandpipers breed in a relatively small area in northern Asia, the tundra zone of northern Siberia. They don’t spend long on their breeding grounds. They arrive near the beginning of the thaw, in June and they leave at the end of July/beginning of August, when cold and snow return.

Once on the breeding grounds, there is quite a lot of variability in the start of egg-laying due to inter-year fluctuations in the timing of the thaw. The incubation period is 20 days, and the fledging period is an incredibly short 15 days. So the period from laying eggs to independent young is little more than a month. Males play no role in incubation and chick-rearing, so they leave on southwards migration around the end of June. Females leave as soon as their chicks have fledged. These immature birds head south a week or two later, without parental guidance! This ordering of migration is observed at bird-ringing stations on the migration route: males first, then females, and finally the juveniles.

Curlew Sandpipers migrate to a vast area of Africa and Australasia during the non-breeding season:

After the breeding season, arrival on migration at the southern end of Africa starts near the end of September, and numbers at wetlands build up in October-November. The average weight of a Curlew Sandpiper at the non-breeding site at Langebaan Lagoon in South Africa’s West Coast National Park from arrival until February is 57g. After this they gradually increase in weight. When they depart on migration, they weigh 80g to 90g. Most of this additional mass is fat, fuel for migration. But this is not enough fuel for the entire journey to the tundra. Far from enough!

The mean departure date on northwards migration from Langebaan Lagoon is estimated to be 24 April. The mean arrival date on the breeding grounds in Siberia is estimated to be 10 June. That is 42 days. Mean flight speed is 65km/h. The distance from Langebaan Lagoon to the breeding grounds on the tundra of the Taimyr Peninsula is about 13,000km. At 65km/hour, flying 24 hours per day, a Curlew Sandpiper can cover 1,560km/day. Finally, 13,000/1,560 = eight days to fly the distance. The remaining 42–8=34 days is used for refuelling. This can only be done at high-quality wetlands where food is abundant. According to flight-range formulae obtained during experiments in which birds flew in wind tunnels, a Curlew Sandpiper needs 132g of fuel to travel from Langebaan Lagoon to the breeding grounds – 99g must be obtained on the journey during the 34 non-fly days: 99/34=2.7g per day. This is well within their capabilities, so it is a believable number. (This information is sourced from this paper).

Not all Curlew Sandpipers migrating from their non-breeding grounds in Africa to the breeding areas in Siberia follow the same route. But the total number of really good wetlands for refuelling is small.

One of the best is the Sivash, in the western edge of the Sea of Azov, which in turn is in the northeastern part of the Black Sea, in the disputed territory of the Crimean Peninsula:

Researchers at the Azov-Black Sea Ornithological Station estimate that about 66,000 Curlew Sandpipers refuel in the Sivash on northwards migration (and 160,000 on autumn migration). Most refuelling sites for Curlew Sandpipers (and other waders on migration) are tidal. This results in extensive areas of mud and sand becoming available at every low tide for feeding. But the Black Sea is too small to have any tides at all, and this applies also to the Sea of Azov, and especially the Sivash.

So how come the Sivash a great refuelling site? The answer is the wind. It is a complex area of shallow lagoons. As the wind blows in one direction, it pushes water along with it, and this results in some mudflats being exposed for a while. Then it blows in a different direction, and another set of mudflats are exposed. The refuelling waders continuously redistribute themselves opportunistically to use the best areas under any one set of wind conditions.

In studies which started in 1974, it is known that northward passage of Curlew Sandpipers through the Sivash starts in mid-April. Peak migration is in the period 11 to 20 May, and it tapers off by the end of the month.

So in the next few weeks, Curlew Sandpipers, and many other birds, probably counted in millions, are going to migrate through the battle zones of the eastern half of Ukraine. It will be migration in a time of war. We simply have no idea of whether the habitats they will use have been impacted by military activity.

The Ukrainians based at the Azov-Black Sea Ornithological Station have done extensive bird ringing (see the map above for the main ringing sites). They have retrapped Curlew Sandpipers from other countries, and theirs have been retrapped elsewhere. This information is summarized in this map:

From the Ukrainian perspective, their Curlew Sandpipers are linked with a remarkable number of countries: Norway, Finland, Poland, Swede, Germany, UK, France, Spain, Hungary, Italy, Bulgaria, Russia, Greece, Tunisia, Morocco, Senegal, Benin, Mali, Sudan, Chad, Namibia and South Africa – that is 22 countries that have shared individual Curlew Sandpipers with Ukraine via bird rings. In reality, there are many more.

The media coverage of armed conflict and war rightly tends to focus on the humanitarian impacts. But it is important to grasp that war also has impacts on biodiversity. The land over which the war is fought is frequently degraded (think defoliants, bomb craters, soil compaction and chemical contamination from weapons such as tanks), so that important habitats are damaged and species loss accelerated. Conservation initiatives fall by the wayside. Research, and especially the type of research that provided the data used in this blog, stops. In some parts of the world, war leads to increases in wildlife poaching and human encroachment on protected areas. Sadly, the impacts of war on biodiversity are so widespread (and so poorly understood) that a subdiscipline of ecology known as “warfare ecology” has come into existence (see Machlis, G.E. & Hanson, T. 2008. Warfare ecology. BioScience 58: 729–736). DM

The key publication from which most of this information has been drawn is Diadicheva, E. & Khomenko, S. 2006. Migration of Curlew Sandpiper Calidris ferruginea through the Azov–Black Sea region, Ukraine. International Wader Studies 19: 82–95. At the time of writing the paper, Elana Diadicheva and Sergie Khomenko were with the Azov-Black Sea Ornithological Station, Melitopol, Ukraine.

This article first appeared on the Biodiversity and Development Institute website.

Professor Les Underhill has been Director of the Animal Demography Unit (ADU) at the University of Cape Town since it started in 1991. Although citizen science in biology is his passion, his academic background is in mathematical statistics. He was awarded his PhD in abstract multivariate analyses in 1973 at UCT and what he likes to say about his PhD is that he solved a problem that no one has ever had. He soon grasped that this was not the field to which he wanted to devote his life, so he retrained himself as an applied statistician, solving real-world problems.

Migration in a time of war: A tiny bird’s mighty trek through Ukraine battle zones