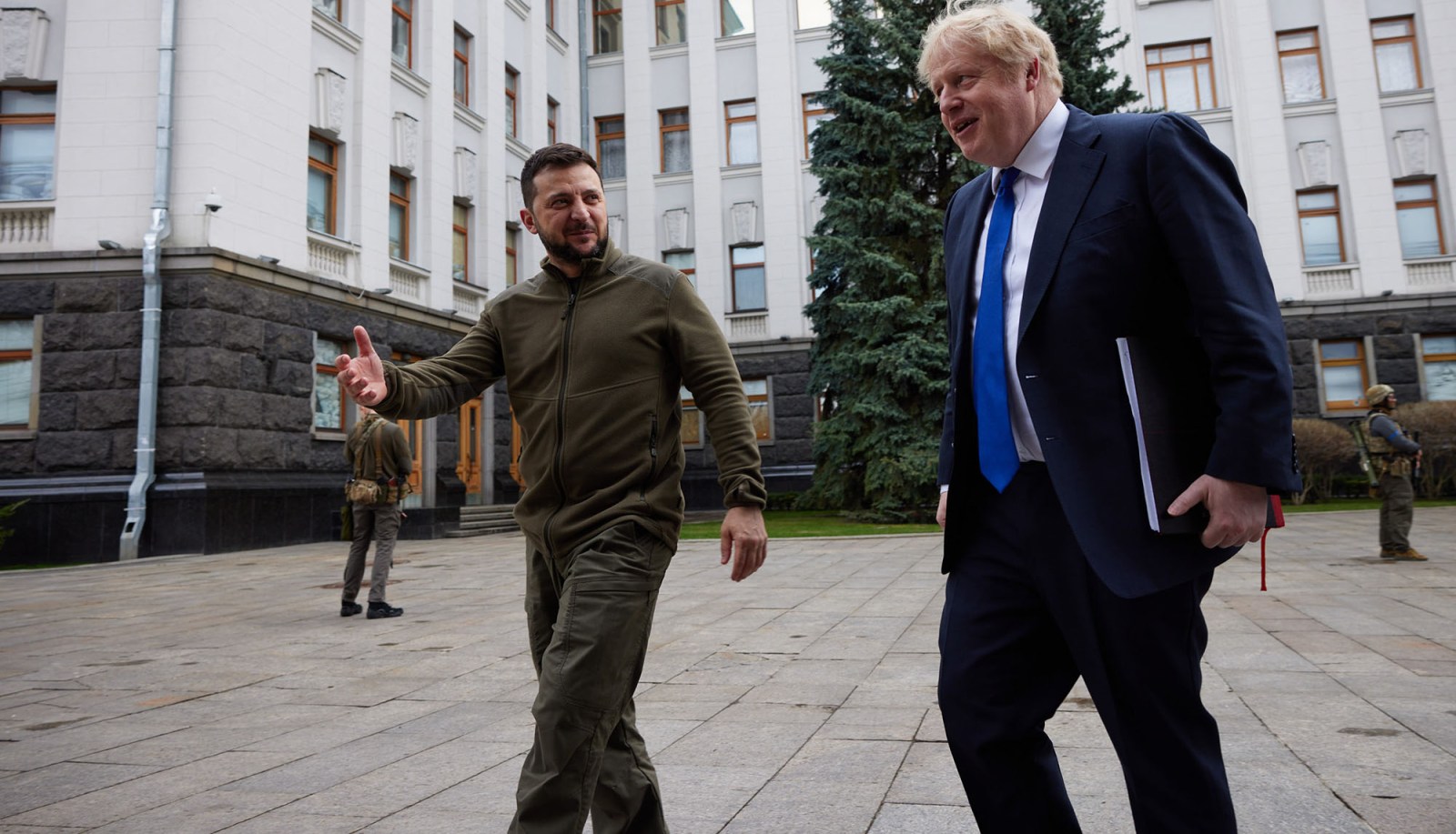 British Prime Minister Boris Johnson (right) and Ukrainian President Volodymyr Zelensky before their meeting in Kyiv, Ukraine, on 9 April 2022. Johnson paid an unannounced visit to Kyiv to ‘show solidarity’ with the country a day after a missile strike killed dozens at a railway station in Kramatorsk in the east of the country. (Photo: Epa-Efe / Ukrainian Presidential Press Service / Handout Handout Editorial Use Only / No Sales)

Austrian Chancellor Karl Nehammer said he’ll meet Russia’s Vladimir Putin in Moscow on Monday, two days after visiting Kyiv. European defence officials met to discuss the next phase of the war in Ukraine, in which Russia is expected to mount an offensive for the control of eastern areas.

Fighting continues around the southern port of Mariupol, where air strikes targeting the city centre have failed to drive out Ukrainian defenders after a month-long siege. Ukraine said Russian air strikes destroyed the airport at Dnipro.

A new commander for Russia’s military in Ukraine has drawn alarm among US officials, and efforts are under way to get more weapons to Ukraine. The Kremlin said it’s boosting a national economic stability fund, using oil and gas revenues that continue to flow.

Renewed missile attacks by Russian forces have demolished the airport at Dnipro in central Ukraine, according to the regional governor. Dnipro is the fourth-largest city in the country.

The airport came under shelling in the morning and then again several hours later, with the subsequent attack injuring rescue workers on the scene, Valentyn Reznichenko said on his Telegram channel.

Austrian leader to meet Putin in Moscow after Kyiv trip

Austria’s Chancellor Karl Nehammer said on Twitter he’d meet Vladimir Putin in Moscow on Monday in an attempt to build dialogue with the Russian president.

The move is an unusual one for Nehammer, a novice in diplomatic circles who took office in December. He’ll look to build on militarily neutral Austria’s perceived role as a bridge between Europe’s east and west.

US officials wary of Putin’s new commander in Ukraine

Russia’s new military commander in Ukraine will probably mean “a continuation of what we have already seen on the ground,” said White House press secretary Jen Psaki.

Psaki was asked on Fox News about General Alexander Dvornikov, leader of Russia’s Southern Military District, who’s been tapped to run the overall war effort in Ukraine. He notably oversaw Russian forces in Syria in 2015 and 2016.

“This particular general has a resumé that includes brutality against civilians in other theatres, in Syria. And we can expect more of the same,” US National Security Adviser Jake Sullivan said on CNN. “This general will just be another author of crimes and brutality against Ukrainian civilians.”

US in ‘game plan’ for more weapons for Ukraine

Efforts to supply arms to Ukraine as Russian forces regroup in the east include “looking at systems that would require some training” for Ukrainian troops outside the country, National Security Adviser Jake Sullivan told CBS on Sunday.

Sullivan said he and Mark Milley, chairman of the Joint Chiefs of Staff, “worked through a game plan” for delivering more weapons from the US or its allies during a call last week with President Volodymyr Zelensky. “Some of that’s been delivered, some of it’s on the way and some of it we’re still working to source,” Sullivan said.

Vladimir Putin and Belarus leader Alexander Lukashenko will meet Tuesday at the Vostochny Cosmodrome in eastern Russia, Interfax reported. They’re expected to discuss Lukashenko’s hopes of being part of negotiations with Ukraine.

It’s a rare foray out of the Moscow region for Putin since Russia’s invasion of Ukraine on 24 February.

Volodymyr Zelensky spoke by phone with German Chancellor Olaf Scholz on Sunday, with the talks said to focus on the prosecution of Russian war crimes and financial support for Kyiv.

A readout from the German government and a Twitter post from Zelensky made no reference to any discussion about Germany’s energy purchases from Russia.

Kyiv has accused Germany of financing Moscow’s war machine with its longstanding reluctance to stop buying Russian natural gas and coal. Berlin is looking to wean itself off Russian gas over time.

Bloomberg News reported last month that VTB Bank Europe has been put up for sale, with German regulators backing the plan as they seek to avoid a messy unravelling.

The missiles, part of the latest UK military aid, will be crucial as Russia presses its assault on southern coastal cities, including Odesa, said Ihor Zhovkva, an adviser to Ukraine’s president.

“Russia is now trying to capture some major cities from the sea, such as Odesa,” Zhovkva said Sunday on the BBC. “They are now firing and shelling the infrastructure over there, from the sea.” Odesa, a key naval base on the Black Sea, has come under fire from missile strikes launched from the Crimean peninsula, Ukraine’s military has said.

EU foreign policy chief Josep Borrell held an extraordinary meeting of the bloc’s military committee on Sunday to discuss expected Russian attacks in the east and south of Ukraine, as well as Kyiv’s request for additional weapons, according to an EU official who declined to be named.

EU foreign ministers are expected to discuss further sanctions on Russia on Monday, including on the oil sector.

The unusual Sunday meeting came after Russia on Friday bombed a train station in the eastern Ukrainian city of Kramatorsk, killing at least 50 people. The EU plans to approve an additional €500-million in arms in the coming days to support Ukraine, in addition to €1-billion already allocated.

Russia will increase its government reserve fund by 273.4-billion roubles ($3.4-billion) to “ensure the stability of the economy in the face of external sanctions,” the Kremlin said in a decree.

The government will mainly finance the increase via “additional oil and gas revenues received in the first quarter of 2022,” it said, citing legal amendments approved in early March by President Vladimir Putin just after he launched the invasion.

Ukraine has started to pursue about 5,600 cases of war crimes linked to Russia’s invasion, Prosecutor General Iryna Venediktova told the UK’s Sky News. The suspects in only the main “anchor case” include more than 500 top military, political and other officials in Russia, she said.

“Almost every region of Ukraine was bombed, and we have a lot of concrete facts in every region and every city,” Venediktova said. The Kremlin denies targeting civilians and has blamed Ukraine for killing thousands of its own people, without providing evidence and despite satellite images, intercepted communications, eye-witness accounts and other reports indicating its troops are at fault.

Venediktova said Vladimir Putin is “the main war criminal of the 21st century”, but while he remains Russian president he can’t be charged under international law without a decision from the International Criminal Court prosecutor.

In response to mounting losses, and as it prepares for what’s expected to be a major offensive in Ukraine’s east, Russia is looking to bolster troop numbers with personnel discharged from military service since 2012, the UK said in an intelligence update. Moscow is also trying to recruit from Transnistria, the pro-Russian enclave in neighbouring Moldova, the UK said.

Nato estimated in late March that as many as 15,000 Russian soldiers had been killed since the invasion of Ukraine on 24 February. Wounded soldiers who can’t rapidly return to duty are typically twice the number of dead, according to a Center for Strategic and International Studies estimate.

A global pledging campaign, “Stand Up for Ukraine” raised $11-billion on Saturday to help more than 10 million people displaced within and outside Ukraine since Russia invaded six weeks ago.

Ukraine President Volodymyr Zelensky also addressed the event via video, and later spoke with Trudeau, he said on Twitter.

Japan insurers to halt coverage for firms in Russia — report

European embassies that moved out of Kyiv before or during Russia’s invasion are starting to return, taking their lead from the European Union’s diplomatic mission.

UK Prime Minister Boris Johnson made an unexpected visit to Kyiv, the latest in a string of leaders travelling to the Ukraine capital to meet President Volodymyr Zelensky.

The UK said it had also liberalised tariffs on most imports from Ukraine.

Alphabet’s Google said it had complied with applicable sanctions in blocking the YouTube channel of the Duma, the lower house of Russia’s parliament.

Duma TV said on its Telegram channel earlier on Saturday that its account on YouTube, a unit of Alphabet’s Google, had been blocked.

“Google is committed to compliance with all applicable sanctions and trade compliance laws. If we find that an account violates our Terms of Service, we take appropriate action,” a Google spokesperson said in an e-mailed statement. “Our teams are closely monitoring the situation for any updates and changes.” DM