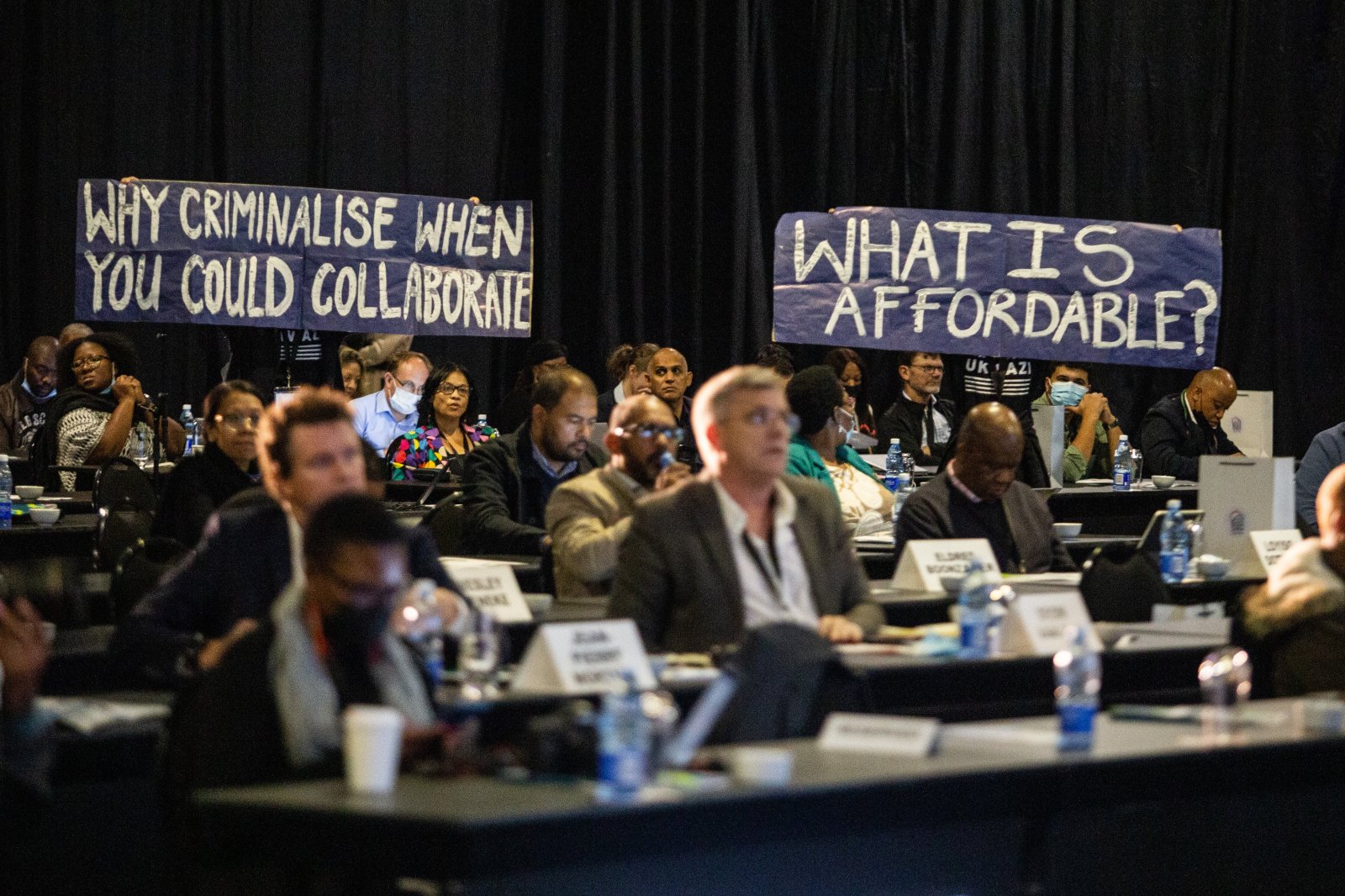 Demonstrations outside and inside convention centre at City of Cape Town launch of land release programme.

Over 100 people from various land occupations descended on the Cape Town International Convention Centre on Friday demanding to be included in discussions about affordable housing taking place inside.

“If [Western Cape Premier] Alan Winde doesn’t come out and address us, we will enter the convention by force,” said activist Myolisi Magibisela, drawing cheers from the protesters.

The demonstrators sang struggle songs and carried placards, one of which read: “Rendering people homeless is a crime” and “Welcome to the People’s Housing Indaba”.

Inside the convention centre, the City of Cape Town’s Land Release Programme for More Affordable Housing was being launched. The indaba, the City said, was “to bring together affordable housing partners, other government stakeholders, financiers and private developers to unlock opportunities on well-located land that will be released by the City”.

There is massive demand for affordable housing in Cape Town but “the state is only able to satisfy a tiny portion of that demand”, Cape Town Mayor Geordin Hill-Lewis told the assembly.

“There is not a single house in South Africa that is delivered by the state. The state pays for it, but it is a private contractor that delivers it,” he said.

Hill-Lewis said that the role of the indaba was to bring together a partnership between the private sector and government within the affordable housing market. The state would assist with policy and planning; the private sector would make the investment.

Hill-Lewis said that nine pieces of City-owned land would be released this year and 14 more pieces have already been identified for the near future. He also said that four military bases in Cape Town are potentially available but are still being negotiated.

Premier Alan Winde said, “In the last two years, the City alone has got 1,024 illegal land occupations.” The housing waiting list backlog is 600,000 people, he said.

Protesters wearing Ndifuna Ukwazi T-shirts held up banners when government officials spoke. One banner said: “Mayor, Ministers and the Premier: you are needed outside @ the peoples housing indaba”.

“What is affordable?” asked another.

“We welcome the housing indaba,” said Reclaim the City spokesperson Buhle Booi. “Now the City must tell us where the land is and who will have access to it.”

In a memo, the organisation said: “Cape Town Mayor [Hill-Lewis] didn’t invite affected communities to the indaba and ignored them when they tried to ‘reach out to him’ … Again, we are on the outside, trying to have our voices heard.”

The memo demands that the mayor, premier and national Minister for Human Settlements visit the occupations this month “for meaningful engagement” about “community-specific needs”.

People living in occupations “are deeply concerned about the privatisation of public land in a way that does not benefit the people who most need access to land and housing”, it says.

The organisation also wants the unlawful occupation and the streets, public places and noise nuisance by-laws scrapped. It says that “they criminalise poor people for choices made in the absence of affordable housing”.

The City must “lease land and buildings directly to the poor where they occupy, in the same way you lease to golf courses”, the memo said.

Call for moratorium on evictions to be extended

Meanwhile, 32 social justice movements affiliated with housing rights have called on the Presidency and the National Command Council to extend the moratorium on evictions until the state produces a sustainable solution to mass foreclosures and evictions.

During the National State of Disaster, no one was allowed to be evicted from their home or have their place of residence demolished unless a court granted an order authorising the eviction or demolition.

The moratorium extension is necessary to “prevent a catastrophic rise in homelessness”, Ndifuna Ukwazi (NU) said in a letter addressed to the presidency and several government departments.

“If the government lifts the ban on evictions now, the country will face a secondary crisis of foreclosures, evictions and homelessness in the wake of a global health crisis,” said NU.

“The state and other social partners have a moral duty towards the hardest hit in our society to mobilise resources (financial and vacant or underutilised property assets) toward an immediate humanitarian response toward keeping the vulnerable population housed,” said NU. DM