BACK WITH A ROAR 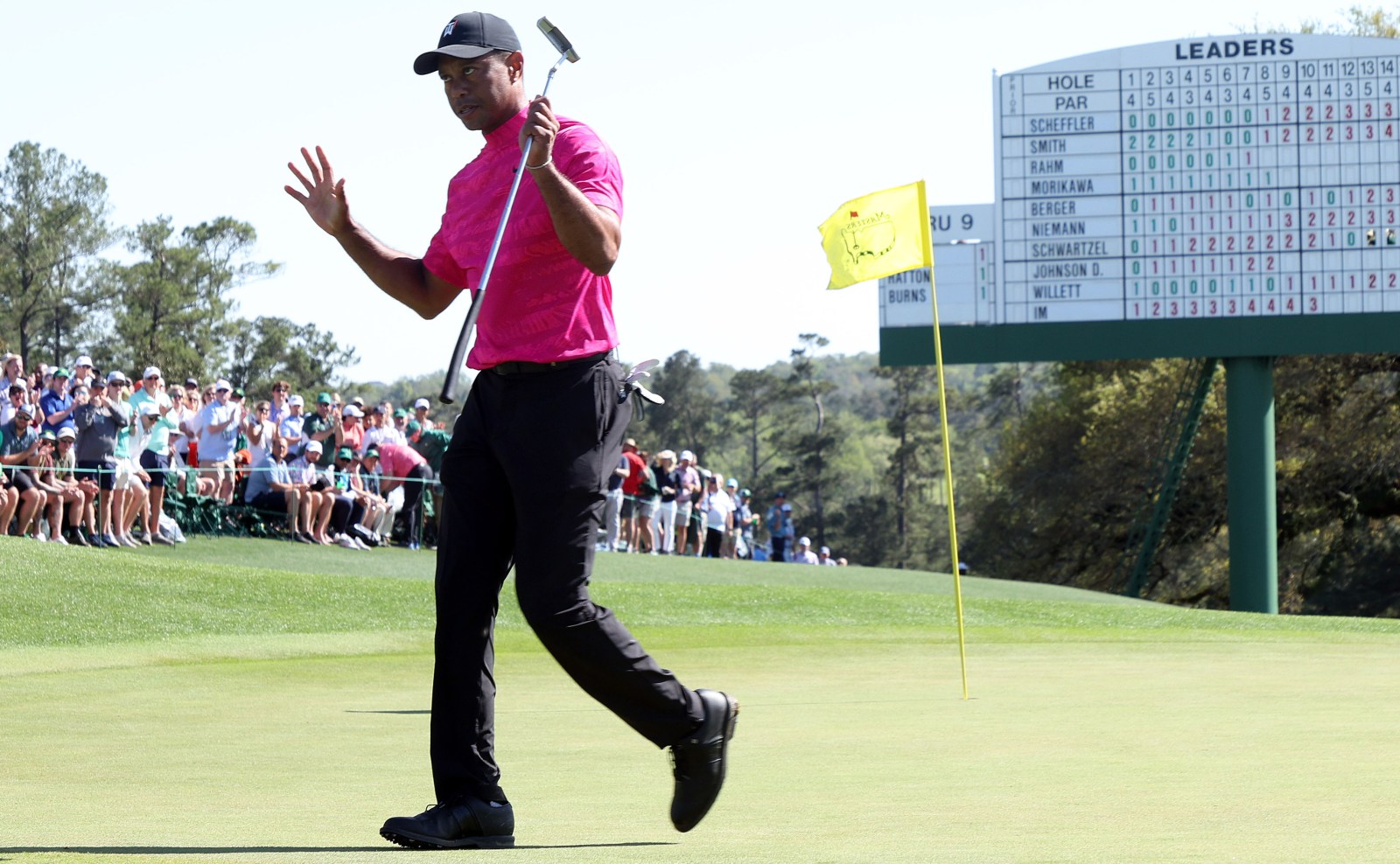 Tiger Woods waves to the crowd as he walks off the 18th green after finishing the first round of the Masters at Augusta National Golf Club on 7 April 2022. (Photo: Jamie Squire / Getty Images)

Huge galleries and familiar roars through the Augusta pines told the story of the day as 46-year-old Tiger Woods put himself in contention after the first round of the 2022 Masters.

Back playing the Masters after a career-threatening car crash, Tiger Woods said he thought he could win a sixth Green Jacket and on Thursday made a few more believers after carding a solid opening 71.

In his first competitive round of golf in 508 days, Woods mixed three birdies with two bogeys at Augusta National to sit in a tie for 10th. He is four back of South Korea’s Im Sung-jae, who is alone atop the leaderboard after posting a five-under 67 highlighted by an eagle at the par-five 13th.

Australian Cameron Smith, who won golf’s unofficial fifth major, the Players Championship, in March, lurks one back at four-under 68.

Smith and Im have come close to a Green Jacket once before, finishing in a tie for second behind Johnson two years ago.

Although the year’s first major featured all of golf’s best, there was only one man most had come to see, the world’s 973rd ranked player, Woods.

It was a remarkable effort from the 15-time major champion just 14 months after doctors had considered the possibility of having to amputate his right leg mangled in car accident.

“The place was electric,” said Woods. “I hadn’t played like this since 2019 when I won because in 2020 we had Covid and we had no one here, and I didn’t play last year.

“So, to have the patrons fully out and to have that type of energy out there was awesome to feel. People have no idea how hard it’s been.”

Woods said he was prepared to play with pain and at times noticeably limped as he made his way around the undulating layout regarded as one of the toughest walks on the PGA Tour.

After Covid-19 limited the number of spectators allowed onto the grounds over the past two years, the crowds were back in force and bringing with them the familiar roars that echo through the tall Georgia pines.

The start was delayed by 30 minutes due to thunderstorms but the dreary weather could not dampen the buzz as fans lucky enough to have secured one golf’s most coveted tickets moved quickly to stake out their places around some of the sport’s most famous holes and wait for Woods to appear.

The 46-year-old, wearing a pink shirt and black pants, had his game face on as he walked out to the first tee where the entire length of the par-four, 445-yard (407m) opening hole was lined with thousands of spectators.

After five consecutive pars, Woods nearly aced the par-three sixth hole where his tee shot stopped about half a metre from the cup to set up his first birdie which was followed by his first bogey at the eighth.

On even par and entering Amen Corner, Woods made it through the infamous stretch of holes unscathed, picking up his second birdie at 13.

That was followed by another bogey at 14 but the 16th brought out vintage Woods as he rolled in a monster 29-foot (8.8m) birdie putt and celebrated with a trademark fist pump.

“I did something positive today,” said Woods. “I was able to finish up in the red. I’m right where I need to be. There’s a long way to go and a lot of shots to be played. I am as sore as I expected to feel.

“I’ll get into my own little world, and I’ll get after it.”

Japan’s Hideki Matsuyama opened the defence of his Masters title with an even-par 72, while Northern Irishman Rory McIlroy’s bid to complete the career Grand Slam with an elusive Green Jacket once again got off to an uninspiring start with a one-over 73.

The five-strong South African contingent had a mixed day with two-time Masters runner-up Louis Oosthuizen, who played alongside Woods, signing for a disappointing 76.

Oosthuizen clutched his back after his second shot on the second hole of the day and appeared out of sorts for the remainder of the round. Oosthuizen did not speak to the media after the round.

Left-hander Garrick Higgo, one of the early starters, posted a solid 72 while 2011 Masters champion Charl Schwartzel also carded 72. Schwartzel’s afternoon round saw him reach two-under at the turn, but the infamous Amen Corner struck as he made bogeys at the par-four 11th and par-three 12th holes.

“I think it (the course) was pretty soft this morning. It was raining while we were warming up,” Higgo said. “We (the early starters) definitely got the easier side of the draw. Some of the guys teeing off now (afternoon field), it’s going to be windy, and I’m sure the greens are probably already dried up.”

Erik van Rooyen and Christiaan Bezuidenhout both signed for one-over 73s as they battled the windy afternoon conditions.

Van Rooyen, when asked what his mindset was for the second round, quipped: “I’m going to try and make 18 birdies.” DM/Reuters