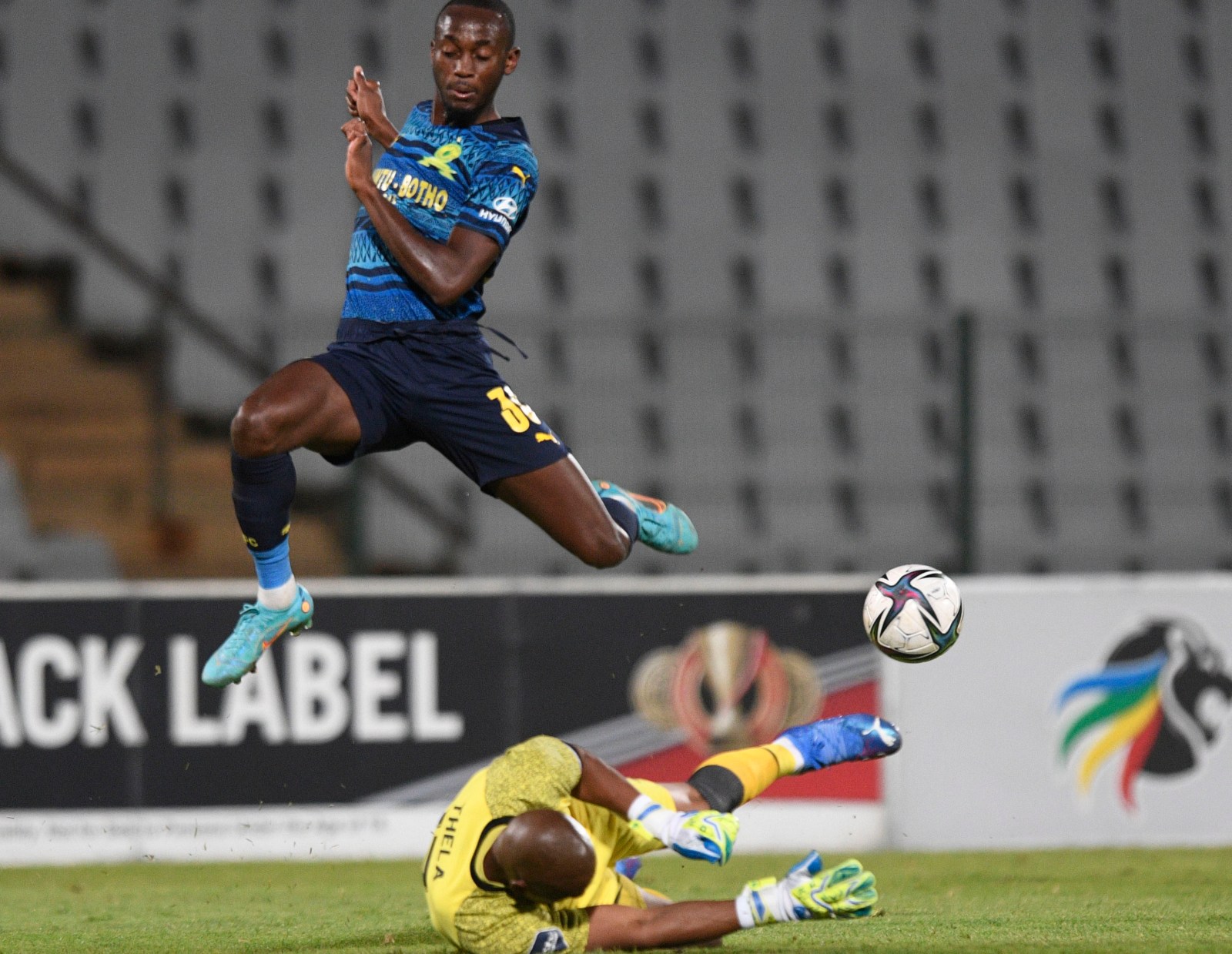 In midweek DStv Premiership action, the Mamelodi Sundowns striker displayed his goal-scoring prowess, while the race for second continued to heat up.

During an interview with DM168 at the tail-end of 2021, Mamelodi Sundowns sharpshooter Peter Shalulile downplayed the prospect of usurping Zambian striker Collins Mbesuma’s longstanding record of 25 league goals in a single season, saying it was about the team’s success before his own.

“It’s the team first, then us [as individual players]. The team must do well and win each and every game,” said Shalulile. “But I still believe that it’s possible for me to score more goals. I give glory to God and I ask for more protection from injuries to keep on going.”

On Wednesday, 6 April, Shalulile edged closer to Mbesuma’s 17-year record by grabbing the league’s first hat-trick this season to help Masandawana beat relegation-threatened Swallows 4-2. The win nudged the Tshwane giants ever-so-close to a fifth DStv Premiership title on the trot. They enjoy an 11-point gap over second-placed Royal AM, with six games remaining for most teams in the Premiership campaign.

Shalulile also has the same number of games to add to his haul of 18 league goals so far, and possibly match or surpass the record that the lethal Mbesuma set during the 2004/2005 season in the colours of Kaizer Chiefs. More realistically, he can become the first player to breach the 20-goal mark since Siyabonga Nomvethe did it for Moroka Swallows a decade ago.

Following his latest exploits, the Namibian international was showered with praise by Sundowns co-coach Manqoba Mngqithi.

“The most important thing with Peter [is that] he deserves that reward of scoring goals because he’s one of the most professional players I have ever worked with in my career,” shared Mngqithi of the 28-year-old.

“[He is] one player that never puts his foot wrong in terms of giving himself, giving his heart to the team and I’m sure everyone in the club is excited to have a player like him because he’s such a good role model. Even when things are going well for him, he works the hardest in the team and that’s very important.”

While Sundowns are sprinting to the title on the final stretch of the league marathon, the race for second and a final Caf Champions League slot is still wide open.

Front-runners Royal, who are now four points ahead of third-placed Kaizer Chiefs (39) and Cape Town City in fourth (39), picked up maximum points over Marumo Gallants following a 2-0 victory. Bafana Bafana striker Victor Letsoalo opened the scoring on the half-hour mark, before Lesego Manganyi struck 10 minutes into the second half to register his first goal of the season for John Maduka’s side.

Letsoalo’s solitary took his goals tally to 14 for the season and handed him hope of yet catching up with Shalulile. The win was also the KwaZulu-Natal-based outfit’s fourth in their last five Premiership outings.

Meanwhile, Chiefs could not collect maximum points after playing to a dull 0-0 stalemate versus TS Galaxy. Despite criticism from the Amakhosi faithful that the players are not living up to their full potential, Chiefs coach Stuart Baxter defended his charges after the result, saying:

Chiefs’ arch-rivals Orlando Pirates kept their top two hopes alive after squeezing 1-0 past Sekhukhune United thanks to a Fortune Makaringe strike. The result leaves the Buccaneers in fifth and five points adrift of second-placed Royal. DM