How to contain the problem of central Africa’s bushme... 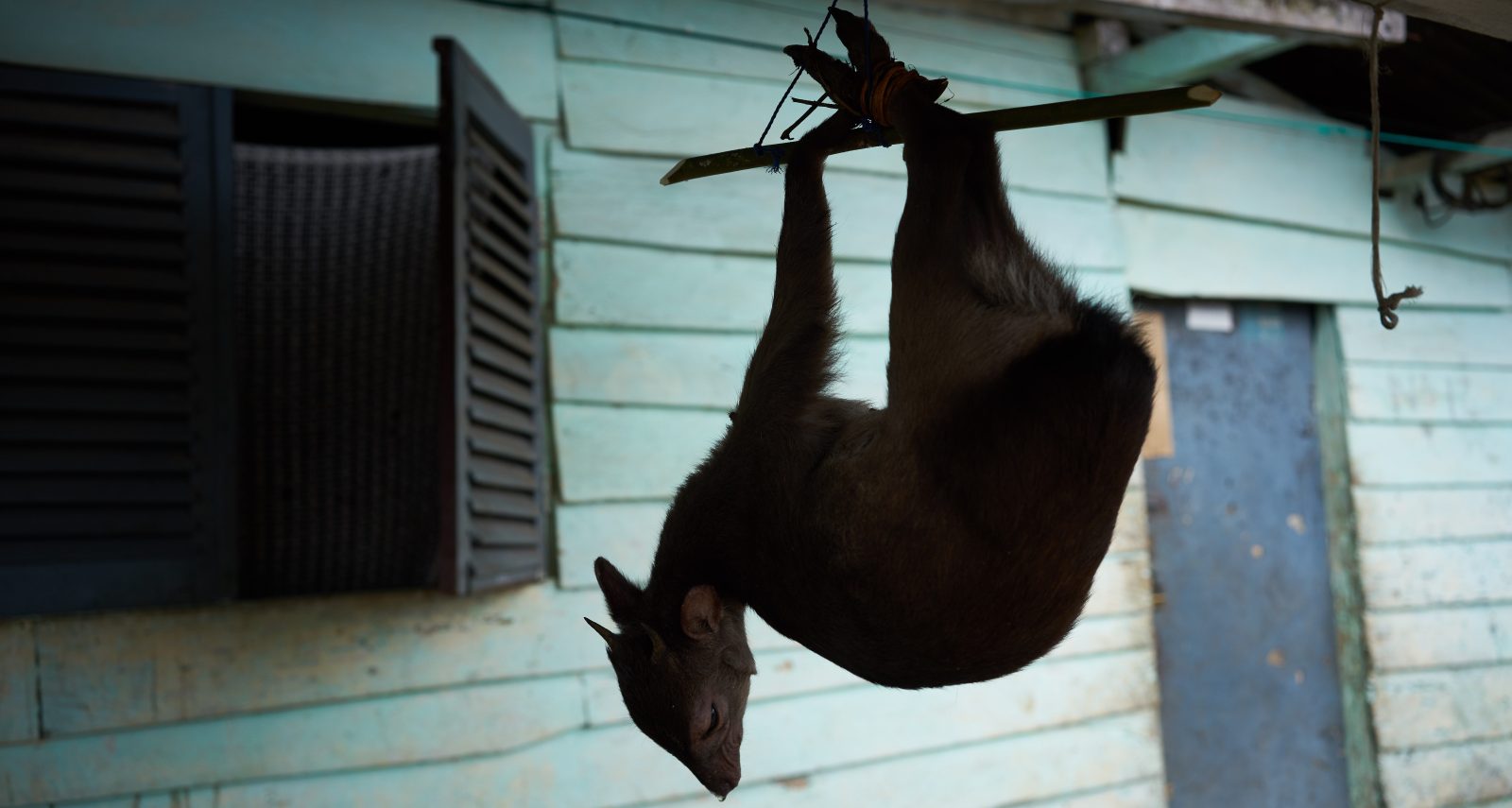 A duiker, or small antelope, is hung for sale as bushmeat in the southern Bioko town of Batete on 9 August 2018 in Malabo, Equatorial Guinea. (Photo: David Degner / Getty Images)

The bushmeat trade in central Africa is regarded as one of the biggest threats to wildlife in the region, giving rise to terms such as ‘defaunation' as tropical forests are emptied of animals. It also raises concerns about the spread of zoonotic diseases to human populations.

Various species of antelope, rodents, wild pigs and primates are among the targets. Much of this wild meat is consumed at the village level, but demand in urban centres has created a thriving underground economy.

The African Journal of Ecology recently published a special issue focused on the bushmeat trade, which has defied strategies to contain it.

Quantifying demand is a way of getting to grips with the challenge, and one of the studies, lead-authored by Juliet Wright of the Wildlife Conservation Society in New York, surveyed 326 restaurants in Brazzaville and Kinshasa. The thrust of the study is the need to use information to hone demand reduction and related initiatives.

“Conservation interventions to address the unsustainable trade in wild meat have generally focused on hunting and trafficking in the vicinity of protected areas, with limited attention given to urban-based wild meat trade actors and the consumer behaviours that are driving this trade,” the study notes.

Like studies and initiatives to suppress the demand for rhino horn in Asian markets, this study examines the urban consumption side of the industry – the top of the value chain.

The study estimates that about 10,000 wild meat dishes are consumed every day in the two cities, which equates to about 1,500 tonnes of wild meat annually. But it found that bushmeat was not critical to the viability of most of the businesses surveyed.

“Its wide availability reinforces the social norm around eating wild meat, yet few restaurateurs considered wild meat to be central to the viability of their business,” says the study, titled Profiling the Types of Restaurants that Sell Wild Meat in Central African Cities.

It also found that the majority of the restaurants selling bushmeat were informal and owned by women.

“Wild meat demand-reduction campaigns have recently been launched in a few Central African cities, including Kinshasa, and the Covid-19 pandemic has also caused some people to think twice about eating wild meat due to heightened concerns over the disease risks.

“It is therefore conceivable that some restaurateurs – almost exclusively women – could be negatively impacted by reduced wild meat sales as a result,” the study says.

Although wild game meat fetches premium prices and boosts profit margins, it is not crucial to the sector as a whole in the cities.

“For the vast majority of restaurants, wild meat was not considered to be central to the viability of the business,” the study says. It is “important to distinguish between restaurants that specialise in and are reliant on wild meat sales and those that sell it as part of a more diverse offering, since these different types of restaurant would need to be engaged in conservation efforts in different ways.

“Restaurants that are not financially reliant on wild meat sales on the other hand could be a low-hanging fruit for conservation. Engaging with and persuading some of these restaurants to remove wild meat from their menus would both decrease its availability to consumers and help in changing the social norm around eating wild meat,” it says.

It also notes the futility of stressing the illegal nature of the bushmeat trade.

“Focusing on the illegality of selling wild meat is unlikely to dissuade restaurateurs from preparing it in their restaurants, particularly if such laws are perceived as ‘foreign’ and misaligned with local values and cultural identities.”

So the policy recommendation here comes down to persuasion and convincing restaurants that don’t absolutely rely on bushmeat to stop offering it as a way to begin throttling urban demand.

Yet other strategies come to mind. One would be to meet the demand with meat from game animals that have been harvested in a sustainable way – a potential solution that does not seem to have much traction in conservation circles. But it has some promise.

South Africa’s privately owned game farm sector could be one source on this front. Species on the menu in central Africa include red duiker and blue duiker and other types of antelope.

There are plenty of different antelope species on South African game farms, including duikers.

This is a potential export market for South African products and one that could be formalised. Getting the product to market would involve challenges and costs, but these need not be insurmountable.

Instead of suppressing demand, perhaps the situation calls for imaginative ways to meet that demand in a way that does not endanger wildlife. DM168