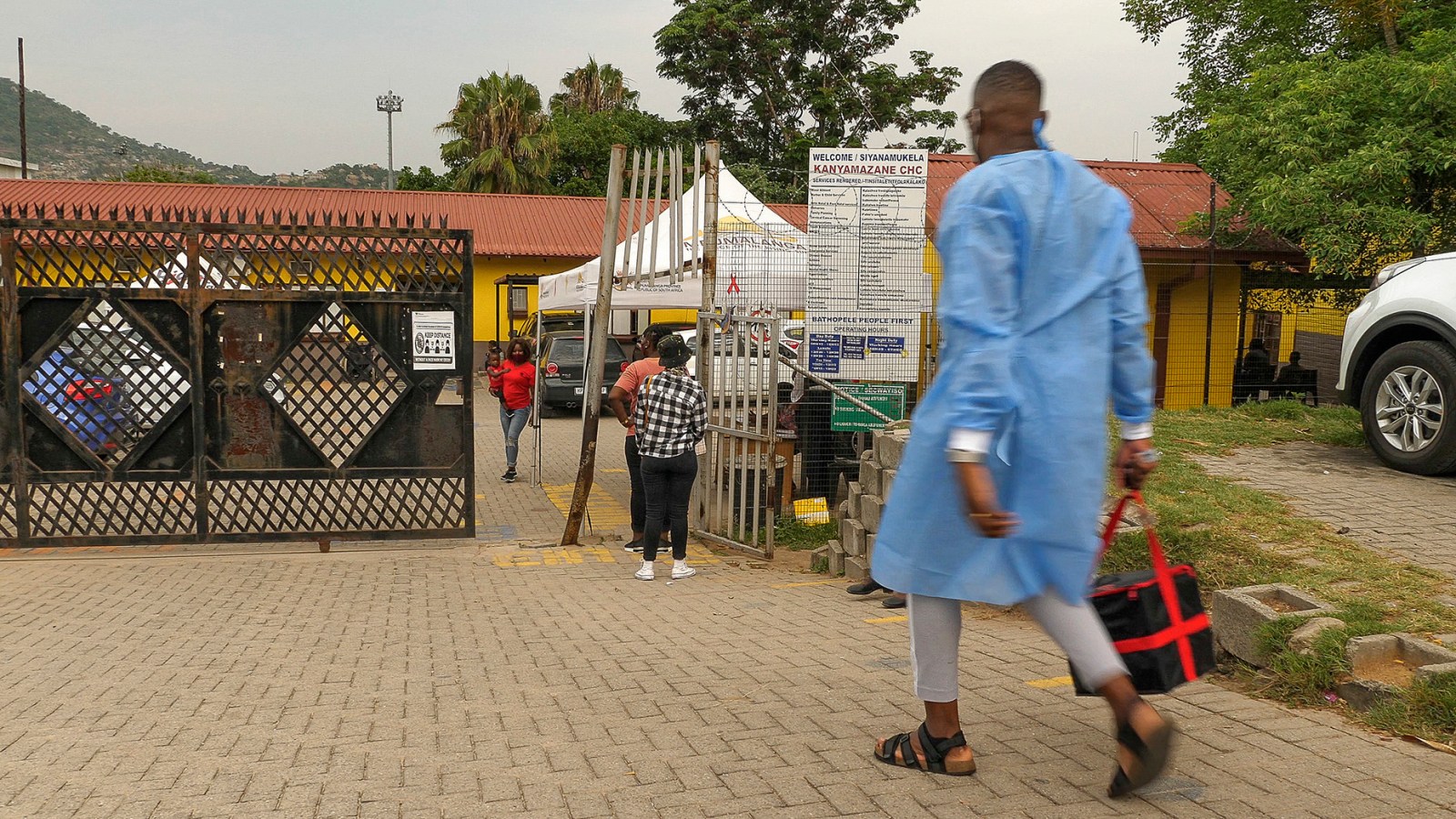 The public healthcare system in Mpumalanga is under severe pressure from ongoing challenges. Above is Kanyamazane Community Health Centre in the province. (Photo: Rian Horn / Ritshidze)

The Mpumalanga Department of Health is undermined by challenges that range from water shortages affecting some of its health facilities to poor medicine distribution and a spate of assaults and robberies, putting healthcare workers at risk. Spotlight spoke to unions, opposition parties and the department about plans to address the ongoing challenges.

Healthcare workers are being robbed and assaulted. Crippling water shortages leave family and friends no choice but to bring their hospitalised loved ones the water needed for washing in buckets. Persistent problems with the distribution of medicines lead to stockouts at facilities. These are all issues that have emerged from recent reports on the public healthcare system in Mpumalanga.

The official reports, such as an analysis of the third quarter performance report of the Mpumalanga Department of Health in the 2021/22 financial year and reports by the Public Protector, make for grim reading — as do reports from professional organisations such as the South African Medical Association (Sama), unions and political parties in the province.

More than 54 safety and security incidents

The Democratic Alliance (DA) in the province has flagged security and safety at public health facilities as a key concern. According to the party’s provincial health spokesperson Jane Sithole, last year the department revealed in the Mpumalanga Legislature that 54 cases of security-related matters had been reported at Mpumalanga’s public health facilities over the past two financial years.

The department reported some of these safety incidents in its quarterly report. For example, in February this year, a female doctor was hijacked at gunpoint and was nearly raped after completing her shift at Mapulaneng Hospital in Bushbuckridge.

In October last year, health workers and patients at Empumelelweni Community Healthcare Centre (CHC) were robbed of their personal belongings at gun and knifepoint.

Last year, a person employed by the provincial health department pretended to be a doctor and followed a pregnant patient into the bathroom at Embhuleni Hospital, where he allegedly raped her.

Meanwhile, the department states in the quarterly performance report that it suspended security guards from a private security company who were recently captured on video physically assaulting and harassing a Shongwe Hospital patient who suffers from mental illness.

The South African Medical Association (Sama) earlier said in a statement they are concerned about attacks on healthcare workers at public hospitals.

“In February, a doctor at the Mapulaneng Hospital in Mpumalanga was attacked while on her way to the doctors’ residential quarters after her shift. She was hijacked, robbed at gunpoint, and the perpetrators attempted to rape her. The doctor is, rightly, extremely traumatised by this experience,” the statement read. “Sama is concerned that doctors working in public sector hospitals are living and working in constant fear and in general feel unsafe within their working environments. Sama has on many occasions in the past raised concerns regarding the issue of safety at public hospitals.”

Both Sama and the DA have called on the provincial government to urgently beef up security in the province’s health facilities.

Spokesperson for the Mpumalanga Department of Health Dumisani Malamule tells Spotlight security is not the purview of the health department, but the department is looking into the matter of health worker safety and plans to install CCTV cameras at health facilities where there are none.

“We must note that the issues of security at our health facilities lie with the Department of Community Safety and Transport Management,” says Malamule.

In October last year, the Office of the Public Protector released findings following investigations into some public hospitals in Limpopo, Mpumalanga, KwaZulu-Natal and Gauteng. “We also looked into other conditions at the facilities which included challenges of infrastructure, the availability of equipment and medical supplies, as well as matters related to human resources,” read a statement from the Public Protector’s office.

It was found that the maternity ward is in a deplorable state and patients’ rights are being violated. It was also found that there is not enough space as there are only two delivery beds, no privacy, no decent waiting area and there is a shortage of staff even though the hospital delivers 15 to 18 babies a day.

In its feedback to the Public Protector, the department said there were plans to build a new maternity wing at Themba Hospital and bring in mobile units. The department said they would also be updating their staff organograms and filling vacancies during the new financial year because the moratorium on jobs had been lifted.

Meanwhile, the SA Human Rights Commission (SAHRC) is investigating hospitals in Mpumalanga after complaints about alleged lack of medical services and water shortages. The hospitals under investigation for alleged lack of medical services included the Standerton Hospital and Bernice Samuel Hospital in Delmas, while Mapulaneng Hospital in Bushbuckridge was being probed for alleged water shortages.

When asked about water shortage issues, Malamule told Spotlight that water provision was the responsibility of the local municipality.

At the time of writing, the SAHRC had not responded to an enquiry from Spotlight on the status of its investigations.

Due to problems at the medical depot, many rural clinics and district hospitals struggle to get medicine to patients on time, says the DA’s Trudie Grove-Morgan. According to her, patients face shortages of chronic medication and basic medicines such as Panado at Themba Hospital.

Malamule says they have started to improve the system by appointing a new service provider. He also notes that the Covid-19 pandemic affected medicine supplies.

According to the Provincial Secretary of Nehawu in Mpumalanga, Welcome Mnisi, the pharmaceutical tender should be in-sourced.

“It is important that services like the medical depot should be in-sourced to provide an adequate provision of health services. On the issue of service delivery, credible and competent managers at health facilities should be employed because they are responsible for running these centres,” Mnisi says.

Provincial Chairperson of the Economic Freedom Fighters (EFF) in Mpumalanga, Collen Sedibe, told Spotlight that the issue of medicine shortages had been there for a while and they had raised it with the department. According to him, the Hawks were now investigating the pharmaceutical tender (the current one) after the EFF laid a complaint over what it believed was the irregular awarding of the tender.

Mnisi, in turn, also believes security services must be in-sourced. “In-sourcing is the only solution to the current security challenges because the government will then be better held accountable. If there is a breach of security, the health department passes the buck on to the appointed service provider. If security is in-sourced, this will ensure that workers are not exploited,” said Mnisi.

The EFF says it was disheartening to watch patients’ family members having to carry 20-litre buckets so that their loved ones could take a bath at Mapulaneng Hospital.

“This was terrible for us to witness. It is a gross violation of human rights. Water shortages at a health facility during a pandemic is a recipe for disaster. Water is very important for infection control practices to be fully implemented,” said Sedibe.

When asked about the issue of water provision at specifically Mapulaneng Hospital, Malamule said water supply was a matter that fell under the responsibility of the municipality. He said they were working with local authorities to address the water shortages since this was common in the area.

On the issue of laundry services, Malamule explained that it was “quite normal for other hospitals to assist each other when need arises”. He said it was not unusual for a backlog to occur if one system was under pressure. DM/MC