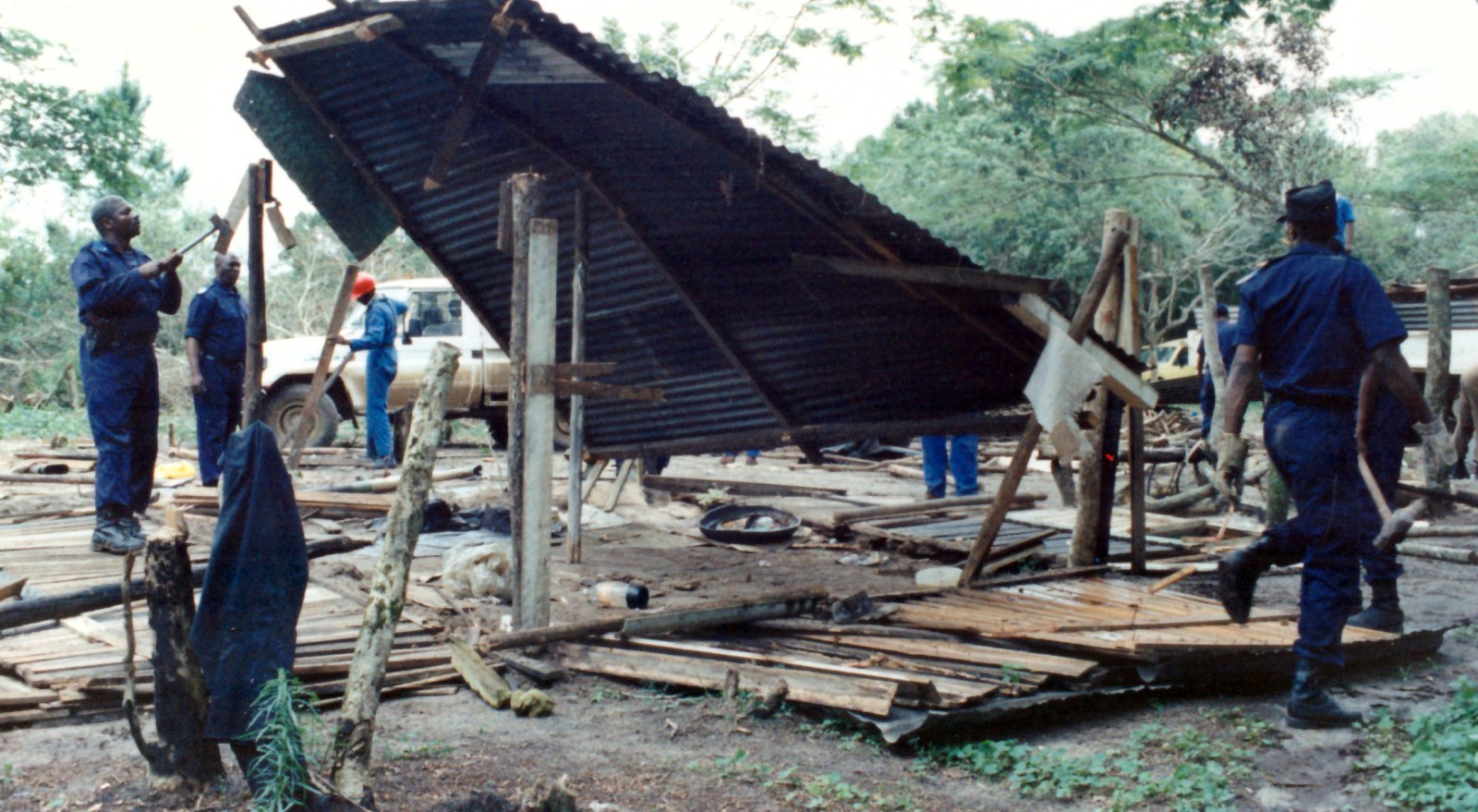 Homes are demolished in 1993 in an attempt to curb the influx of people into the Dukuduku forest. (Photo: Tony Carnie)

Expanding croplands, human settlement, plantation forestry and mining are speeding up habitat loss in game and nature reserves across the country.

Small groups of people started moving into the Dukuduku state forest in northern KwaZulu-Natal during the late 1980s, clearing plots for homesteads and subsistence crops in what was then the largest remaining patch of coastal lowland forest in South Africa.

At first, their presence was barely noticeable. But by the early 1990s that trickle of people turned into a flood. By then, thousands had moved into Dukuduku, many of whom had been displaced over many decades at a regional level by the historical expansion of commercial farming, plantation forestry or the declaration of game and nature reserves.

A breakthrough of sorts was achieved just before the 1994 elections, when a 3,500ha parcel of alternative land was identified nearby. Several thousand people were moved to the new Khula village, and later, to the Zwenelisha settlement.

But many thousands opted to stay put in Dukuduku (which in 1985 was considered the largest and best-preserved coastal lowland forest in South Africa). It covered 3,500ha. Wildlife conservationist Keith Cooper estimated that 90% of coastal lowland forests had been destroyed for cane cultivation.

After the Dukuduku invasion, the eastern part of the forest was lost, leaving just a small fragment intact in the neighbouring Mfutululu area inside the boundaries of the iSimangaliso Wetland Park and World Heritage Site.

Now, Mfutululu also appears to be in jeopardy after recent land invasion attempts that began on 21 March, directly opposite the South African National Defence Force’s 121 Battalion military base.

Earlier this month, about 200 people started to clear and mark out plots of land in Mfutululu on the forest boundary. This land invasion has been attributed to desperation by a group of subsistence farmers whose plots in the Umfolozi River floodplain had been flooded because of the current closed state of the Lake St Lucia estuary. Nevertheless, some local residents have noted the presence of “opportunists” from as far away as Vryheid and Bergville.

The park authority says it hopes to reach a solution through dialogue with community leaders and other stakeholders – including commercial cane farmers and tour operators who are also pushing strongly for the mouth of Lake St Lucia to be regularly breached artificially.

But Mfutululu is just one example of several incursions into proclaimed game and nature reserves across the country over recent years.

On the northern border with Mozambique, a large section of the Ndumo Game Reserve has been transformed into cropland after the KwaZulu-Natal government agreed to allow cultivation of a tiny 20ha section of the park just before the 2009 local elections.

Now, at least 600ha of Ndumo has been cultivated or transformed by human activity, an area at least 30 times larger than the original farming area promised to communities.

There have also been several land incursions in the Sodwana Bay area and the northern sections of the iSimangaliso Wetland Park, and in other provinces.

In the Western Cape, at least 1,025 invasions have taken place on land owned by the City of Cape Town since early 2020.

Several occurred during the Covid-19 hard lockdown, when law enforcement was sparse and poor communities were hit by further job losses. This led to new settlements (reportedly named “Covid-19” and “Sanitiser”) springing  up in the Driftsands Nature Reserve near Khayelitsha.

CapeNature officials have announced plans to de-proclaim this reserve because it is so ecologically degraded by the recent human influx. Further to the east of Cape Town, at least 2,600 people have occupied land in the Knoflokskraal forest near Grabouw.

Forestry, Fisheries and the Environment officials had secured court preservation orders to prevent a further influx of people into the area, said national minister Barbara Creecy, but the department was also pursuing an out-of-court settlement to resolve the situation.

Last week, the prospect of further land invasions into protected areas featured at the ninth People and Parks conference in Johannesburg, under the theme “the role of conservation areas for rural development and economic recovery”.

Lourence Mogakane, chairperson of the National People and Parks Community Task Team, suggests that the risk of further land invasions into protected areas is likely to increase, unless economically marginalised communities begin to derive more tangible benefits from conservation areas.

Speaking before the conference, Mogakane told DM168 that the legacy of forced removals from several protected areas had been aggravated by the slow pace of land restitution and a lack of post-settlement support. In many areas there was a perception that “nothing is actually changing” – even where land rights had been restored.

“Communities want to become part of the management of protected areas but change is not coming as fast as some people would like… They don’t just want a piece of paper proving that the land has been returned. They want to see real benefits in their pockets.

“This is why we would like to join hands with the private sector to explore partnerships in wildlife tourism and property development, so that our people can also be concessionaires and reap the benefits of tourism profits and skills transfer.”

If community-owned conservation areas become run down because of a lack of post-settlement support from the government, this would further increase the likelihood of invasion for subsistence agriculture and residential settlement.

“We are already seeing poachers who are not even from South Africa creating wildlife product syndicates which exploit local people. We would far prefer to see a situation where the community benefits directly, so that they become the first line of defence in defending their new conservation assets.”

But ecologist Dr Simon Pooley says the reality is that many of the remaining wild habitats are already suffering “death by a thousand cuts”.

Pooley, senior environment lecturer at Birkbeck, University of London and honourary researcher at the University of KwaZulu-Natal’s School of Life Sciences, points to a recent study showing a steady loss of natural habitats across the country because of expanding croplands, human settlement, plantation forestry and mining.

The Indian Ocean Coastal Belt and grasslands have been particularly hard-hit, losing more than 50% of its original extent.

“If South Africans don’t mobilise to protect the old moth-eaten blanket of their remaining natural habitats, it will soon be so fragmented that ecosystems’ functions will falter, species will be lost, and we will lose the vital ecosystem services they provide: material and cultural.

“It seems that conservation has faltered in the new millennium in South Africa, and it needs new narratives to engage all South Africans with their natural heritage and help them recognise their dependence on their natural environments. It can’t be left to a privileged few who remember good times from the old days.”

In 2021, scientists Andrew Skowno, Debbie Jewitt and Jasper Slingsby reported that at least 22% of natural habitat in South Africa had been lost since the arrival of European settlers around 1650.

But this average national percentage downplays the picture somewhat, since it includes vast areas of largely arid and untransformed land in the Northern Cape – and does not reflect the more dramatic habitat losses at regional level.

For example, an estimated 66% of the original vegetation has been lost because of land transformation in the Indian Ocean Coastal Belt, a 20km-wide coastal area stretching from the Eastern Cape through KwaZulu-Natal into Mozambique.

Between 1990 and 2018 alone, at least 33,849km2 of land was cleared nationally for human activities, based on analysis of satellite imagery.

A separate research report on natural habitat loss shows that just 9% of South Africa’s mainland land surface is protected, mostly in the form of nature reserves and national parks.

The second Natural Capital research report by Statistics SA, the South African National Biodiversity Institute and the Department of Forestry, Fisheries and the Environment indicates that Mpumalanga (which includes a large part of the Kruger National Park) is the most extensively protected province, with just under 1.7 million hectares or 22% of its land area under formal protection.

By comparison, less than 4% of North West is under formal protection.