With Russia’s invasion of Ukraine, Arctic science experiences a freeze 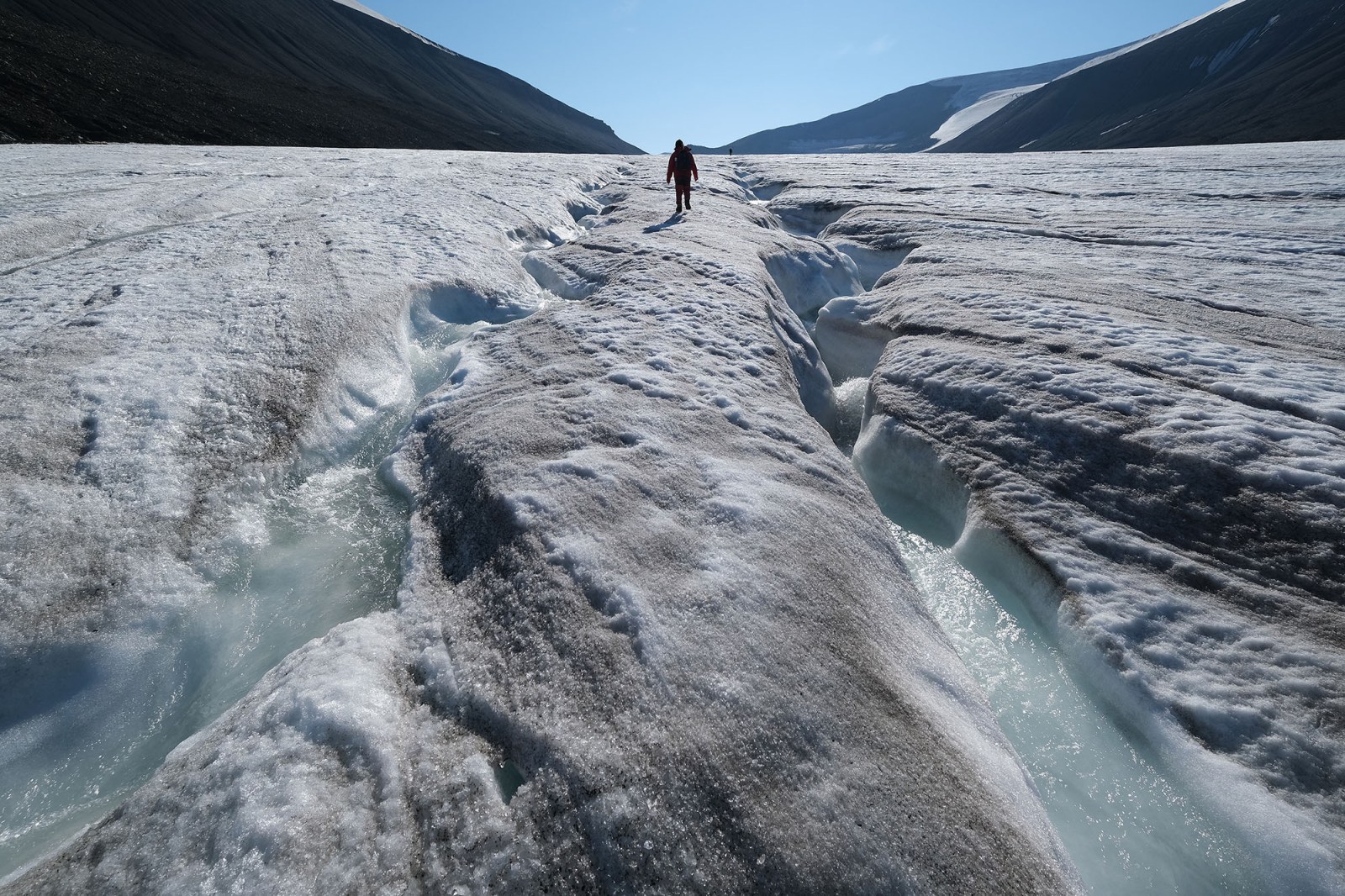 A hiker walks among winding channels carved by water on the surface of the melting Longyearbreen glacier during a summer heat wave on Svalbard archipelago on 31 July 2020 near Longyearbyen, Norway. Svalbard archipelago lies about 1,200km north of the Arctic Circle. (Photo: Sean Gallup / Getty Images)

Russian scientists are being barred from international collaborations, including at-sea surveys and scientific conferences.

The war in Ukraine is a deepening humanitarian tragedy that is disrupting international relations across the globe. Far from the front lines, Russia’s aggression is taking another kind of toll — it’s causing decades of scientific collaboration to unravel, even in the farthest reaches of the Arctic Ocean.

The world is heating up fast. The pace of climate change demands broad scientific study in Arctic regions, where disappearing sea ice, melting glaciers, and other developments carry global consequences.

But the war in Ukraine has brought disarray and uncertainty to a scientific community in which international collaboration is vital, says Maribeth Murray, executive director of the Arctic Institute of North America at the University of Calgary in Alberta. Russia, which controls 50% of the world’s Arctic coastline, is a key partner in Arctic science. “I can’t name a field where they’re not involved,” says Murray.

Murray has felt the war’s impact on Arctic research through her coordinating role for the Arctic Observing Summit, a biennial meeting happening this week in Tromsø, Norway. The meeting brings together international scientists to share findings, exchange ideas, and guide the ongoing development of a long-term pan-Arctic observing network. The network is aimed at understanding systemic changes across the Arctic and informing the adaptation and mitigation measures needed to address climate change.

But this year’s summit — and the broader Arctic Science Summit Week it is part of — is now closed to scientists from Russian institutions and organisations. The International Arctic Science Committee, which hosts the events, released a statement affirming its commitment to “peaceful scientific cooperation between nations,” but declaring it “cannot proceed as normal” because of the war.

It’s the first time the committee has taken such a stance since its work began in the hopeful years following the Cold War — in a time when Mikhail Gorbachev, president of the Soviet Union, suggested the Arctic become a “zone of peace”.

“We had a good number of scientists coming from Russia,” says Murray, who adds that their contributions to the summit include sharing reports, participating in forums, and helping develop recommendations for larger international bodies such as the eight-nation Arctic Council, another post–Cold War institution whose members, for the first time, have paused cooperation with Russia.

But the war’s shock waves are reaching beyond the meetings in Norway. Across the Arctic, partnerships with Russian scientists to study polar bears, whales, walruses, and more are all frozen. In many cases, the severing of ties is impacting research into how climate change affects food resources crucial to Arctic peoples.

Don Anderson, a biologist at the Woods Hole Oceanographic Institution in Massachusetts, leads one such study. Last year, Anderson and his colleagues found evidence of massive and recurrent harmful algal blooms in the Chukchi Sea between Alaska and Russia. The potential for these blooms is a new development in Arctic waters that could harm marine mammals and the people who rely on them.

“What we’re finding is alarming,” says Anderson. He stresses the need for more research, including on the Russian side of the Chukchi Sea, which he has been unable to study. Anderson, whose team has found abundant evidence of algal blooms right up to the Russian border, believes the risk exists in Russia’s warming waters, too, and that algae there could drift into US waters.

Anderson had previously secured funding to bring Russian scientists to his lab to learn his sampling methods and replicate the research in Russia so that communities on both coasts could be informed of possible risks. But the war has scuttled the plan.

In the Gulf of Alaska, international research led by Russian, Canadian, and American teams to study critical salmon habitats as part of the International Year of the Salmon (IYS)* has also been disrupted.

In late February, a day after Russia attacked Ukraine, US officials prohibited an American scientist from joining a Russian research vessel participating in the IYS effort. The move prevented the Russian team from sampling US waters, creating a blank spot in their data spanning hundreds of square kilometres. For now, Mark Saunders, who coordinates the Pacific arm of the IYS project, is scrambling to charter a vessel to gather the missing data. But he says there remains a long-term need to partner with Russia, since the salmon habitat extends into Russian waters and is expected to shift northward into the Arctic.

Evan Bloom, a lawyer and diplomat with the Wilson Center’s Polar Institute, a Washington, DC–based institution, which, among other things, informs governments on polar science needs, says collaborative projects investigating microplastic pollution, the effects of heavy fuels from rising Arctic shipping, and other pressing research are also being impacted.

But Bloom also acknowledges that the horrific circumstances in Ukraine require a strong political response and a pause on collaboration with the Russian government — including its scientists. Unfortunately, he says, that also undermines the science needed to inform actions all governments will need to take in the face of the changing climate. DM/OBP

*The Tula Foundation is one of many organisations that has offered financial and technical contributions to the International Year of the Salmon. Hakai Magazine is part of the Tula Foundation. The magazine is editorially independent of the foundation.

This story originally appeared in Hakai Magazine and is part of Covering Climate Now, a global journalism collaboration strengthening coverage of the climate story.

With Russia’s invasion of Ukraine, Arctic science experiences a freeze